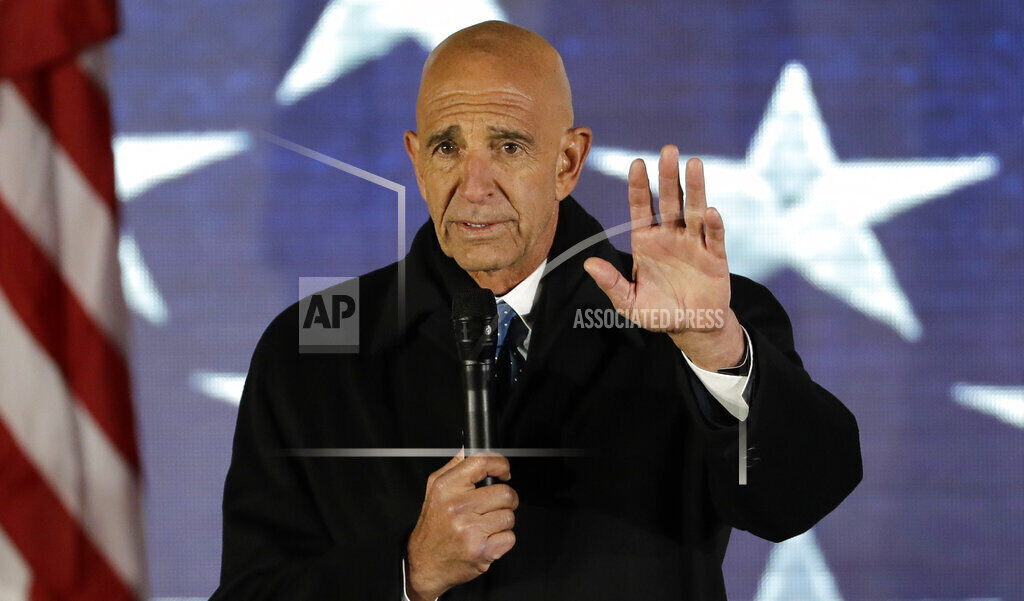 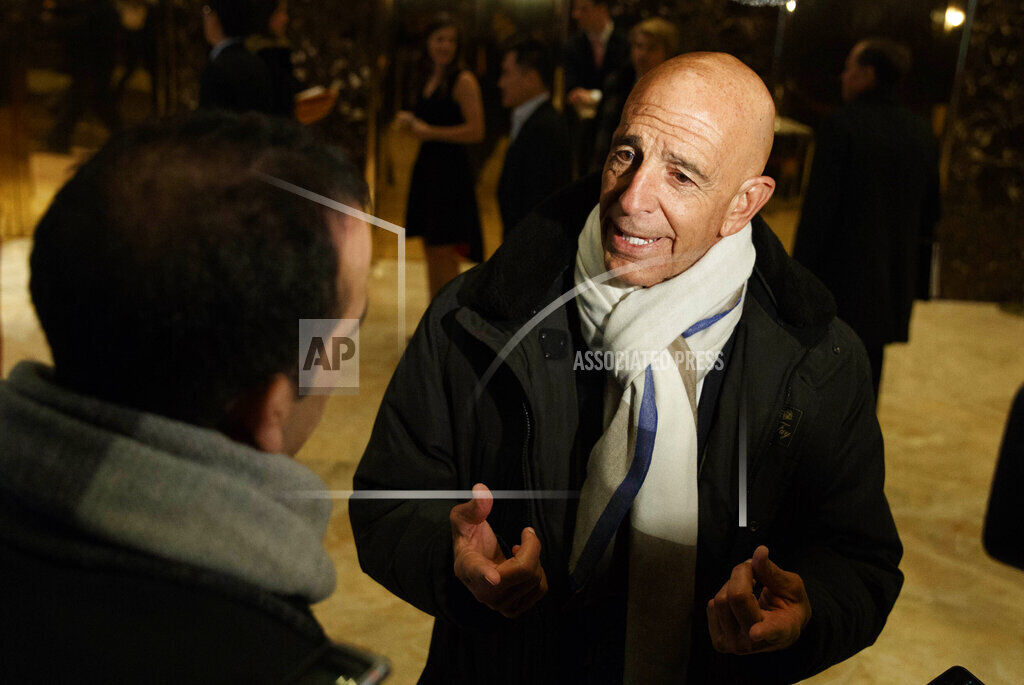 This photo from Tuesday Jan. 10, 2017, shows Tom Barrack peaking with reporters in the lobby of Trump Tower in New York before meeting with President-elect Donald Trump. Barrack, chair of former President Donald Trump's 2017 inaugural committee, was arrested Tuesday, July 20, 2021, in California on charges alleging that he and others conspired to influence Trump's foreign policy positions to benefit the United Arab Emirates. (AP Photo/Evan Vucci, File)

This photo from Tuesday Jan. 10, 2017, shows Tom Barrack peaking with reporters in the lobby of Trump Tower in New York before meeting with President-elect Donald Trump. Barrack, chair of former President Donald Trump's 2017 inaugural committee, was arrested Tuesday, July 20, 2021, in California on charges alleging that he and others conspired to influence Trump's foreign policy positions to benefit the United Arab Emirates. (AP Photo/Evan Vucci, File)

LOS ANGELES (AP) — The chair of former President Donald Trump's 2017 inaugural committee was arrested Tuesday on charges alleging he secretly conspired to influence U.S. policy to benefit the United Arab Emirates, even while he was seeking a position as an American diplomat.

Tom Barrack, 74, of Santa Monica, California, was among three men charged in federal court in Brooklyn, New York, with acting as unregistered foreign agents as they tried to influence U.S. policy on the UAE's behalf while Trump was running in 2016 and later while he was president.

Besides conspiracy, Barrack was charged with obstruction of justice and making multiple false statements during a June 2019 interview with federal agents. Also charged in a seven-count indictment were Matthew Grimes, 27, of Aspen, Colorado, who is a former executive at Barrack’s company, and Rashid al Malik, 43, a businessman from the United Arab Emirates who prosecutors said acted as a conduit to that nation's rulers.

Barrack and Grimes were arrested in Southern California while al Malik was at large, believed to be living somewhere in the Middle East, authorities said. In court papers, prosecutors said al Malik was living in Los Angeles for years before fleeing the U.S. three days after an April 2018 interview by law enforcement. The UAE, which hosts thousands of U.S. troops and aircraft on the Arabian Peninsula, did not respond to requests for comment Wednesday on the indictment.

At an initial hearing in Los Angeles federal court, Barrack's lawyer, Ronak D. Desai, agreed that his client could remain detained until a hearing next Monday after prosecutors submitted written arguments saying he should be denied bail as a risk to flee.

Attorney Michael Freedman, representing Grimes, said his client had no criminal history, no longer worked for Barrack's company and doesn't have the access investigators allege he once had.

“He is a fairly low-level individual in all of this,” Freedman said.

Neither man entered a plea.

Barrack raised $107 million for Trump's inaugural celebration, which was scrutinized both for its lavish spending and for attracting numerous foreign officials and businesspeople looking to lobby the new administration.

While the indictment made no allegations of wrongdoing by the inaugural committee, or by Trump — who was referenced only as “the Candidate,” the “President-Elect” and “the President” — it said Barrack boasted that he had been a 30-year partner of Trump and could help the UAE gain U.S. influence.

“The defendants repeatedly capitalized on Barrack’s friendships and access to a candidate who was eventually elected President, high-ranking campaign and government officials, and the American media to advance the policy goals of a foreign government without disclosing their true allegiances," Acting Assistant Attorney General Mark Lesko said.

“Mr. Barrack has made himself voluntarily available to investigators from the outset. He is not guilty and will be pleading not guilty," a spokesperson said.

Emirati officials were not identified by name either, though details in the indictment link back to Sheikh Mohammed. The crown prince also found himself entangled in special counsel Robert Mueller's report on Russian interference in America’s 2016 election.

Prosecutors said Barrack also provided UAE government officials with sensitive information about developments within the Trump administration — including how senior U.S. officials felt about a yearslong boycott of Qatar conducted by the UAE and other Middle Eastern countries.

“Worse, in his communications with Al Malik, the defendant framed his efforts to obtain an official position within the Administration as one that would enable him to further advance the interests of the UAE, rather than the interests of the United States,” prosecutors wrote in a letter seeking his detention. They noted that he has citizenship in the U.S. and Lebanon, a country with no extradition treaty with the U.S.

When Barrack tried to get Trump to appoint him as either the U.S. ambassador to the UAE or as special envoy to the Middle East, he wrote al Malik 'that any such appointment ‘would give ABU DHABI more power!’" prosecutors wrote.

Bill Coffield, an attorney for al Malik — who was not in custody Tuesday — said his client had cooperated extensively with Mueller and that there was “nothing new here.” He said al Malik had simply tried to foster a good relationship between the country where he was born and the U.S., where he lived and worked for years, "both of which he loves.”

Noting that Forbes estimated Barrack's net worth at $1 billion in March 2013 and his access to a private plane, prosecutors called him “an extremely wealthy and powerful individual with substantial ties to Lebanon, the UAE, and the Kingdom of Saudi Arabia” who poses a serious flight risk in a letter filed prior to his appearance.

They said the evidence against him was “overwhelming” and his risk of fleeing was higher because he’d traveled extensively, taking more than 75 international trips in the last five years, and regularly used private jets.

Authorities cited several specific instances when Barrack or others allegedly sought to influence U.S. policies, noting that, in May 2016, Barrack inserted language praising the UAE into a campaign speech Trump delivered about U.S. energy policy and arranged for senior UAE officials to receive an advanced draft.

They said he also agreed to arrange meetings and phone calls between senior UAE officials and Trump, reviewed a PowerPoint presentation to be delivered to senior UAE officials on how to boost their influence in the U.S. with his help and repeatedly tried to conceal his conduct, even denying he'd ever been asked by al Malik to help the UAE.

Throughout 2016 and 2017, Barrack and Grimes received talking points and feedback from senior UAE officials in connection with Barrack's national press appearances and communicated on a dedicated cellular telephone which had a secure messaging application to facilitate communications with senior UAE officials, prosecutors said.

They said that after one appearance in which Barrack repeatedly praised the United Arab Emirates, Barrack emailed al Malik, saying: “I nailed it ... for the home team,” referring to the UAE.

Prosecutors also asked that Grimes be held without bail, citing the seriousness of the crimes, overwhelming evidence of guilt, his access to Barrack's fortune and significant ties to countries without extradition treaties with the United States.

In his statement, Lesko characterized the alleged conduct as “nothing short of a betrayal of those officials in the United States, including the former President.”