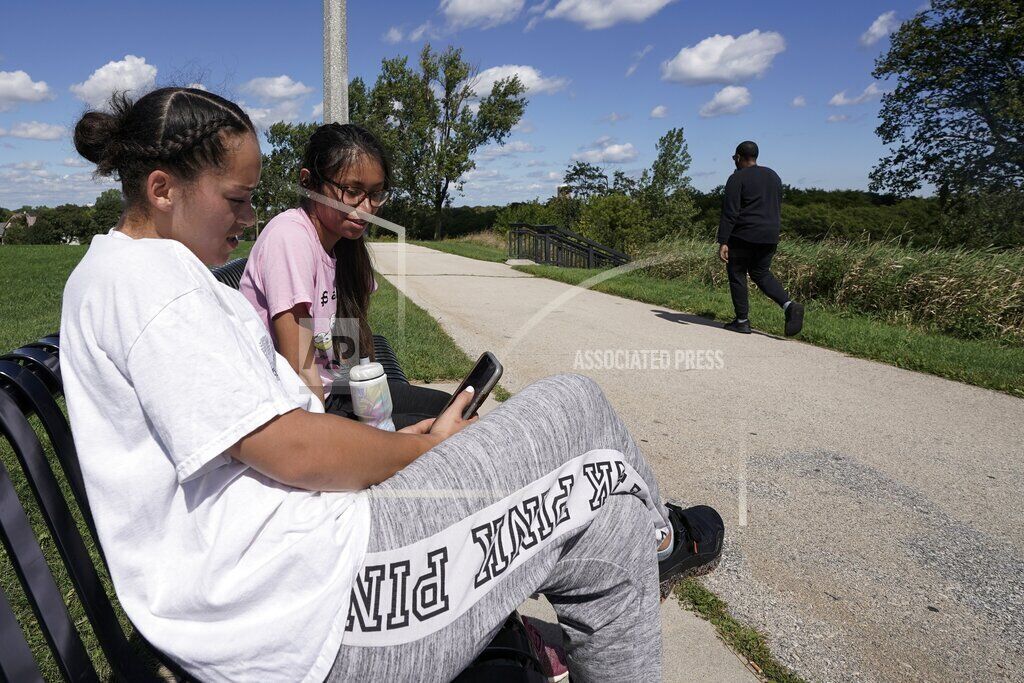 Savannah Brown and Glendy Stollberg use their phone in Kilbourn Reservoir Park Wednesday, Sept. 8, 2021, in Milwaukee. The City of Milwaukee has placed wireless broadband hotspots in the park during the pandemic. (AP Photo/Morry Gash) 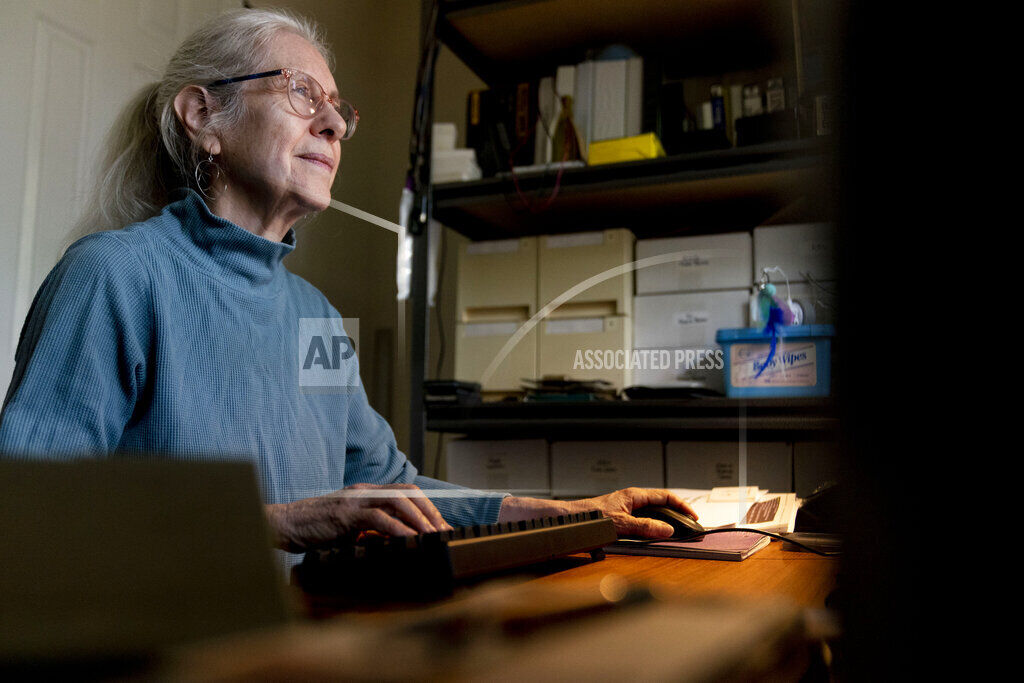 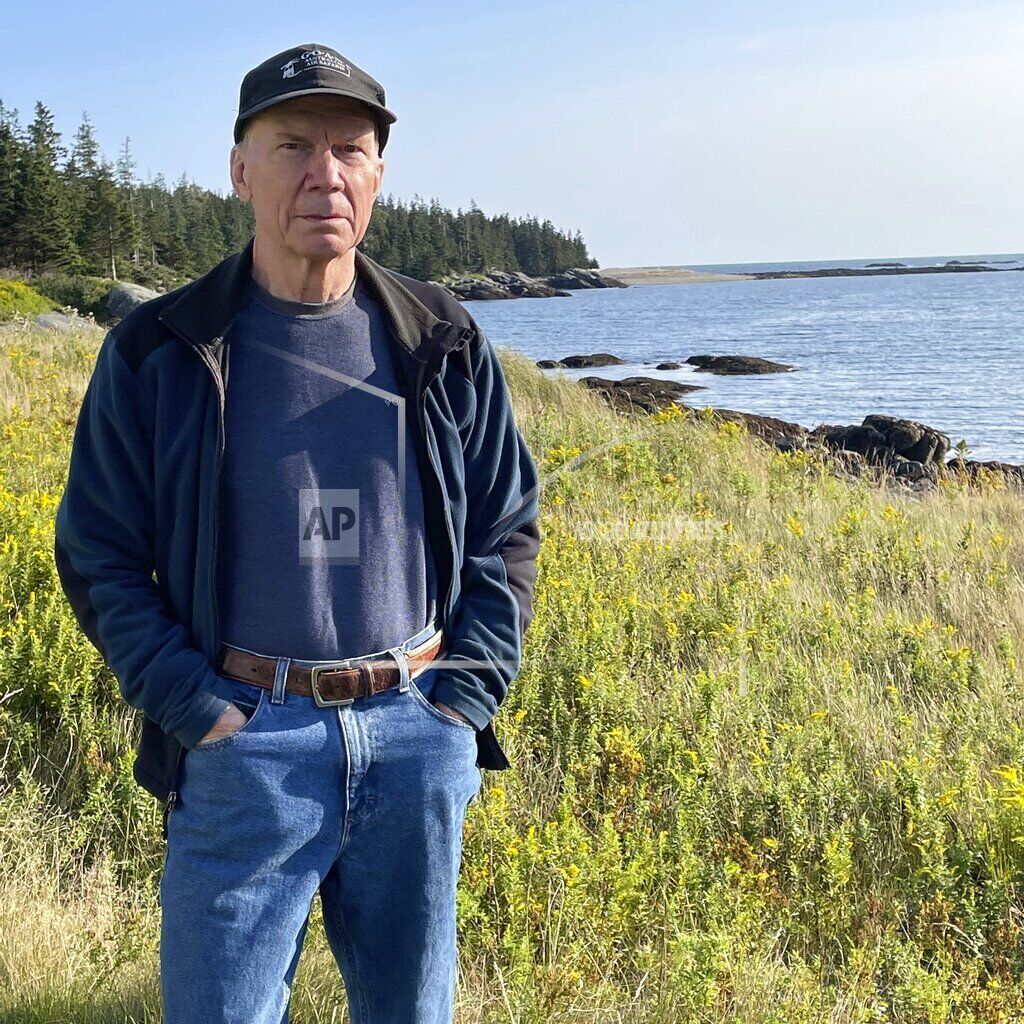 In this photo provided by Donna Hopkins, Charlie Hopkins stands near his home along the shoreline of Isle au Haut Maine, on Sept. 4, 2021. The island, which is accessible only by boat, has slow internet service in some locations, including at Hopkins’ home. Hopkins has concerns about a U.S. Treasury Department rule that narrows the eligibility for broadband infrastructure spending under the American Rescue Plan, which provides $350 billion of flexible funds to state and local governments. (Donna Hopkins via AP)

Savannah Brown and Glendy Stollberg use their phone in Kilbourn Reservoir Park Wednesday, Sept. 8, 2021, in Milwaukee. The City of Milwaukee has placed wireless broadband hotspots in the park during the pandemic. (AP Photo/Morry Gash)

In this photo provided by Donna Hopkins, Charlie Hopkins stands near his home along the shoreline of Isle au Haut Maine, on Sept. 4, 2021. The island, which is accessible only by boat, has slow internet service in some locations, including at Hopkins’ home. Hopkins has concerns about a U.S. Treasury Department rule that narrows the eligibility for broadband infrastructure spending under the American Rescue Plan, which provides $350 billion of flexible funds to state and local governments. (Donna Hopkins via AP)

Cities and urban counties across the U.S. are raising concerns that a recent rule from President Joe Biden's administration could preclude them from tapping into $350 billion of coronavirus relief aid to expand high-speed internet connections.

Biden has set a goal of delivering fast, affordable internet to every American household. The massive American Rescue Plan took a step toward that by including broadband infrastructure among the primary uses for pandemic aid flowing to each city, county and state.

That threshold ensures funding for remote, rural areas that have slow or no internet service, and it matches the definition of broadband set by the Federal Communications Commission in 2015. But cities contend the eligibility mark overlooks the realities of today's internet needs.

Though most cities already have broadband available, the speed still might not be fast enough to handle multiple people in a home trying to work, study and stream entertainment simultaneously — a common scenario during the coronavirus pandemic. The price also can be more than lower-income residents can afford.

Several cities, including Washington, Los Angeles, Milwaukee and San Antonio, have submitted public comments to the Treasury Department urging it to loosen the eligibility standard for spending pandemic relief money on broadband. Some want the Treasury to define underserved areas as anything less than download and upload speeds of 100 Mbps.

That would increase the number of locations eligible for funding from about 11 million to 82 million households and businesses nationwide, according to a study conducted for America's Communications Association, which represents small and medium-sized internet providers.

Cities argue that the Treasury should use a 100/100 Mbps eligibility threshold because that's the same speed projects are supposed to achieve if they receive funding. A separate infrastructure bill working its way through Congress is more flexible, allowing some of its $65 billion in broadband funding to go to “underserved” areas lacking download speeds of 100 Mbps and upload speeds of 20 Mbps.

If the Treasury goes forward with its rule as originally written, sparsely populated areas currently lacking broadband could leapfrog certain urban areas in their internet speeds. That doesn't sit well with some mayors.

“The inner city of Memphis is as in a dire need of broadband connection as rural Tennessee," said Memphis Mayor Jim Strickland, who wants Treasury Department assurance before spending $20 million from the American Rescue Plan on a broadband project.

Residents almost anywhere in Milwaukee already have access to at least one internet provider offering download speeds of 25 Mbps and upload speeds of 3 Mbps. But in parts of the city, fewer than half the households subscribe to internet service because of its cost, said David Henke, the city's chief information officer.

“If you don’t have a job and you can’t afford broadband, that’s kind of a cycle," Henke said. "You’re locked out of remote learning, remote work, telemedicine and participating basically in a modern society.”

Milwaukee has applied for a $12.5 million grant from Wisconsin's share of the American Rescue Plan and would chip in $2.5 million of its own pandemic relief money to expand affordable broadband into more parts of the city, Henke said. But the city wants the Treasury Department to broaden “the narrow wording” of its rule.

Although the public comment period ended in July, the Treasury has set no date for when it will publish the rule's final version. A Treasury official said the department is undertaking a thorough review of the comments that is likely "to continue into the fall.”

U.S. Sen. Ron Wyden, an Oregon Democrat who chairs the Senate Finance Committee, is among those urging the Treasury Department to adopt a broader eligibility threshold. He wrote that it would be “severely misguided" to assume that communities are adequately served by the “woefully outdated” broadband benchmark the department has set.

Broadband industry groups generally have urged the Treasury to stick with its original plan of targeting money at areas with the slowest internet speeds.

“Rather than reinvesting in locations that already have broadband to make it better,” the pandemic relief money should go to "places that don’t have any broadband at all,” said Patrick Halley, general counsel at USTelecom, whose membership includes AT&T, Verizon and others.

The cable industry group NCTA urged treasury officials to tighten eligibility even further. It wants to limit the number of households that already have faster service that can be included in areas targeted for improvements. It also wants to remove the potential for locally subjective decisions about areas that lack reliable service.

Allowing improvements in areas that already meet minimum speed thresholds could siphon money away from the neediest, hard-to-reach areas — potentially leaving them without service once the federal money is spent, industry groups said.

To bring super-fast internet service to every place currently lacking 25/3 Mbps speeds could cost between $20 billion and $37 billion, according to the study for America's Communications Association. That cost jumps to between $106 billion to $179 billion when covering all areas currently lacking speeds of 100/100 Mbps.

“As a matter of prioritization, we think it’s best to start with the areas that have the least," said Ross Lieberman, the association's senior vice president of government affairs.

Though most of the complaints about the Treasury Department rule have come from larger cities, some residents in rural areas also have raised concerns.

Charlie Hopkins, a retired computer hardware and software designer, owns a home on a Maine island that is accessible only by boat. The internet speeds at his house registered barely 5 Mbps for downloading and just 0.4 Mbps for uploading when tested recently for The Associated Press.

Because some homes have faster speeds, Hopkins is concerned the Treasury Department rule could make it difficult for the island to get funding to improve its internet. He said broadband is essential to attract and retain residents.

“Other cities and towns in Maine, especially the cities, are getting higher-speed fiberoptic-based internet,” Hopkins said. "I don’t like being in a position where we’re essentially being told, `Well, you’re at the end of the Earth, so you don’t qualify.’”

Relief Bill Has $28M for Region

The city of Washington will receive nearly $2.6 million, and the county will receive more than $20 million from the federal government’s most …

With millions of dollars coming from the federal government from the American Rescue Plan Act, Washington city officials are now trying to det…