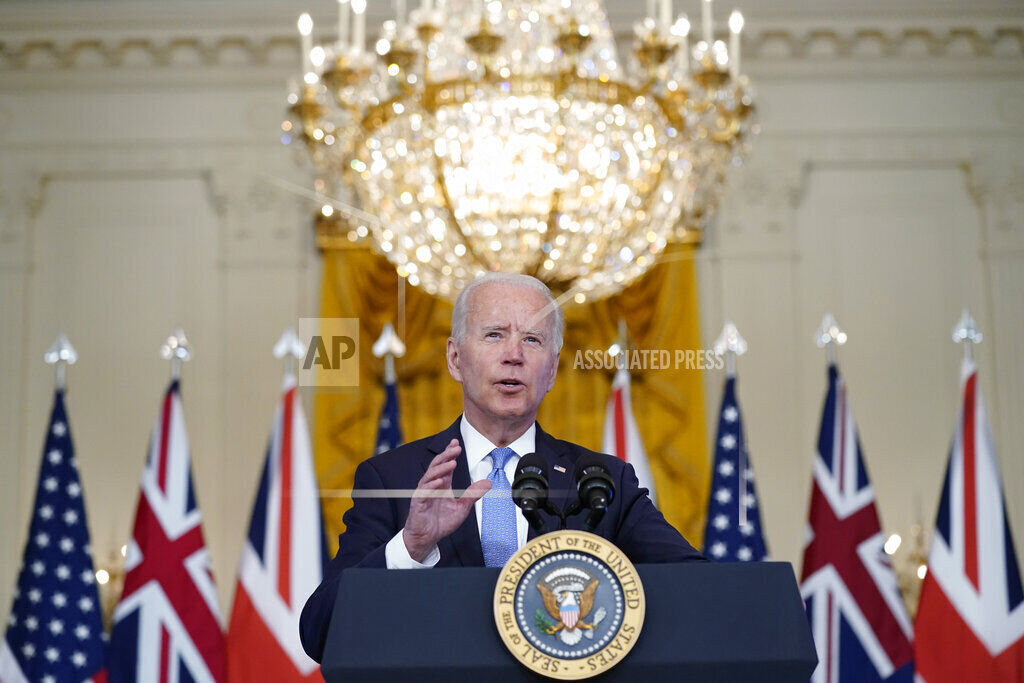 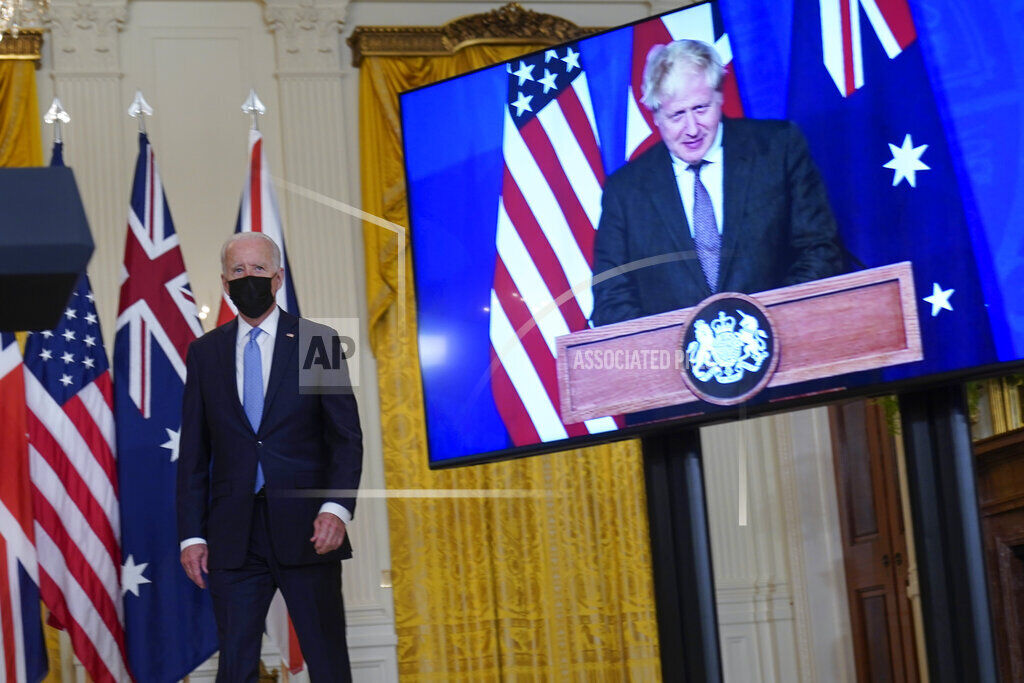 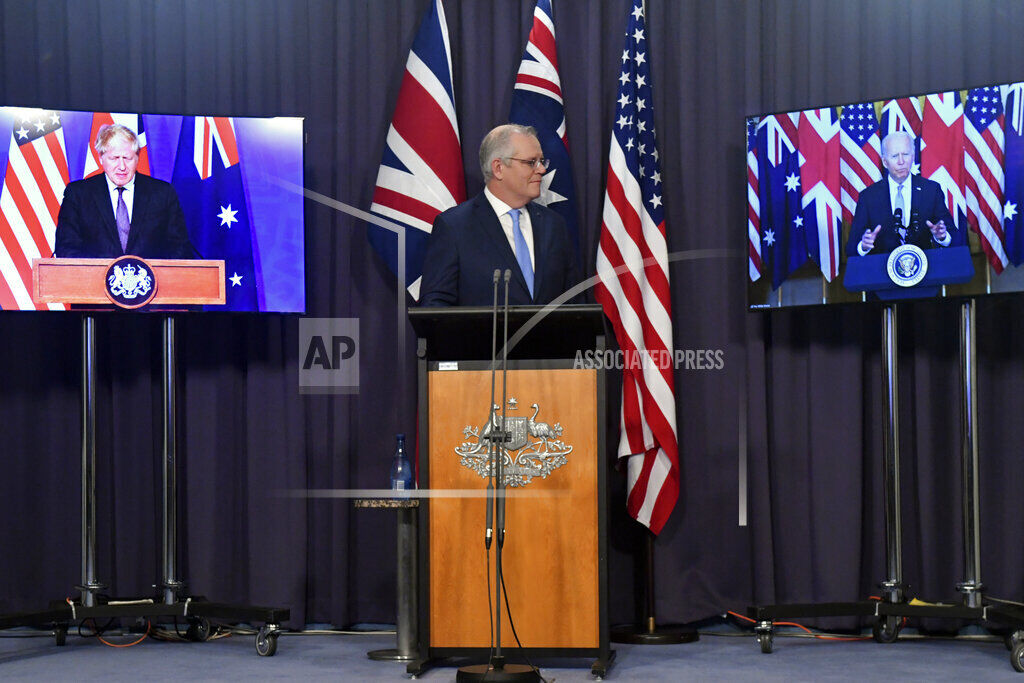 WASHINGTON (AP) — President Joe Biden announced Wednesday that the United States is forming a new Indo-Pacific security alliance with Britain and Australia that will allow for greater sharing of defense capabilities — including helping equip Australia with nuclear-powered submarines. It's a move that could deepen a growing chasm in U.S.-China relations.

Biden made the announcement alongside British Prime Minister Boris Johnson and Australian Prime Minister Scott Morrison, who joined him by video to unveil the new alliance, which will be called AUKUS (pronounced AWK-us). The three announced they would quickly turn their attention to developing nuclear-powered submarines for Australia.

"We all recognize the imperative of ensuring peace and stability in the Indo-Pacific over the long term," said Biden, who said the new alliance reflects a broader trend of key European partners playing a role in the Indo-Pacific. “We need to be able to address both the current strategic environment in the region and how it may evolve.”

None of the leaders mentioned China in their remarks. But the new security alliance is likely to be seen as a provocative move by Beijing, which has repeatedly lashed out at Biden as he’s sought to refocus U.S. foreign policy on the Pacific in the early going of his presidency.

Before the announcement, a senior administration official sought to play down the idea that the alliance was meant to serve as a deterrent against China in the region. The official, who spoke on the condition of anonymity to preview the announcement, said the alliance’s creation was not aimed at any one country, and is about a larger effort to sustain engagement and deterrence in the Indo-Pacific by the three nations.

Johnson said the alliance would allow the three English-speaking maritime democracies to strengthen their bonds and sharpen their focus on an increasingly complicated part of the world.

“We will have a new opportunity to reinforce Britain’s place at the leading edge of science and technology, strengthening our national expertise, and perhaps most significant, the U.K., Australia and the U.S. will be joined even more closely together, " Johnson said.

The three countries have agreed to share information in areas including artificial intelligence, cyber and underwater defense capabilities.

But plans to support Australia acquiring nuclear-powered submarines are certain to catch Beijing's attention. To date, the only country that the United States has shared nuclear propulsion technology with is Britain. Morrison said Australia is not seeking to develop a nuclear weapons program and information sharing would be limited to helping it develop a submarine fleet.

The Australian prime minister said plans for the nuclear-powered submarines would be developed over the next 18 months and the vessels would be built in Adelaide, Australia.

Australia had announced in 2016 that French company DCNS had beat out bidders from Japan and Germany to build the next generation of submarines in Australia’s largest-ever defense contract.

Top French officials made clear they were unhappy with the deal, which undercuts the DCNS deal.

“The American choice to exclude a European ally and partner such as France from a structuring partnership with Australia, at a time when we are facing unprecedented challenges in the Indo-Pacific region, whether in terms of our values or in terms of respect for multilateralism based on the rule of law, shows a lack of coherence that France can only note and regret,” French foreign minister Jean-Yves Le Drian and defense minister Florence Parly said in a joint statement.

Morrison said the three countries had “always seen through a similar lens,” but, as the world becomes more complex, “to meet these new challenges, to help deliver the security and stability our region needs, we must now take our partnership to a new level.”

Matt Pottinger, who served as deputy national security adviser in the Trump administration, said that equipping Australia with nuclear-powered submarines was a significant step that would help the U.S. and its allies on the military and diplomatic fronts.

“When you have a strong military, it provides a backdrop of deterrence that gives countries the confidence to resist bullying,” said Pottinger, who is now a visiting fellow at the Hoover Institution at Stanford University. “Part of the problem right now is that Beijing has gotten rather arrogant and it’s been less willing to engage productively in diplomacy.”

The announcement of the new security alliance comes as the U.S.-China relationship has deteriorated. Beijing has taken exception to Biden administration officials repeatedly calling out China over human rights abuses in Xianjing province, the crackdown on democracy activists in Hong Kong, and cybersecurity breaches originating from China, as well as Beijing’s handling of the coronavirus pandemic and what the White House has labeled as “coercive and unfair” trade practices.

Even as White House officials have repeatedly spoken out about China, administration officials say they want to work with Beijing on areas of common interest, including curbing the pandemic and climate change.

Biden spoke by phone with China’s President Xi Jinping last week amid growing frustration on the American side that high-level engagement between the two leaders’ top advisers has been largely unfruitful.

Asked Tuesday about media reports that Xi had declined to commit to meet with him in person, the U.S. president said it was “untrue.” Biden did not speak in “specific terms” about the new AUKUS alliance during last week's call with the Chinese leader, according to the senior administration official.

The U.S. and Australia, along with India and Japan, are members of a strategic dialogue known as “the Quad.” Biden is set to host fellow Quad leaders at the White House next week.

Biden has sought to rally allies to speak with a more unified voice on China and has tried to send the message that he would take a radically different approach to China than former President Donald Trump, who placed trade and economic issues above all else in the U.S.-China relationship.

In June, at Biden's urging, Group of Seven nations called on China to respect human rights in Hong Kong and Xinjiang province and to permit a full probe into the origins of COVID-19. While the allies broadly agreed to work toward competing against China, there was less unity on how adversarial a public position the group should take.