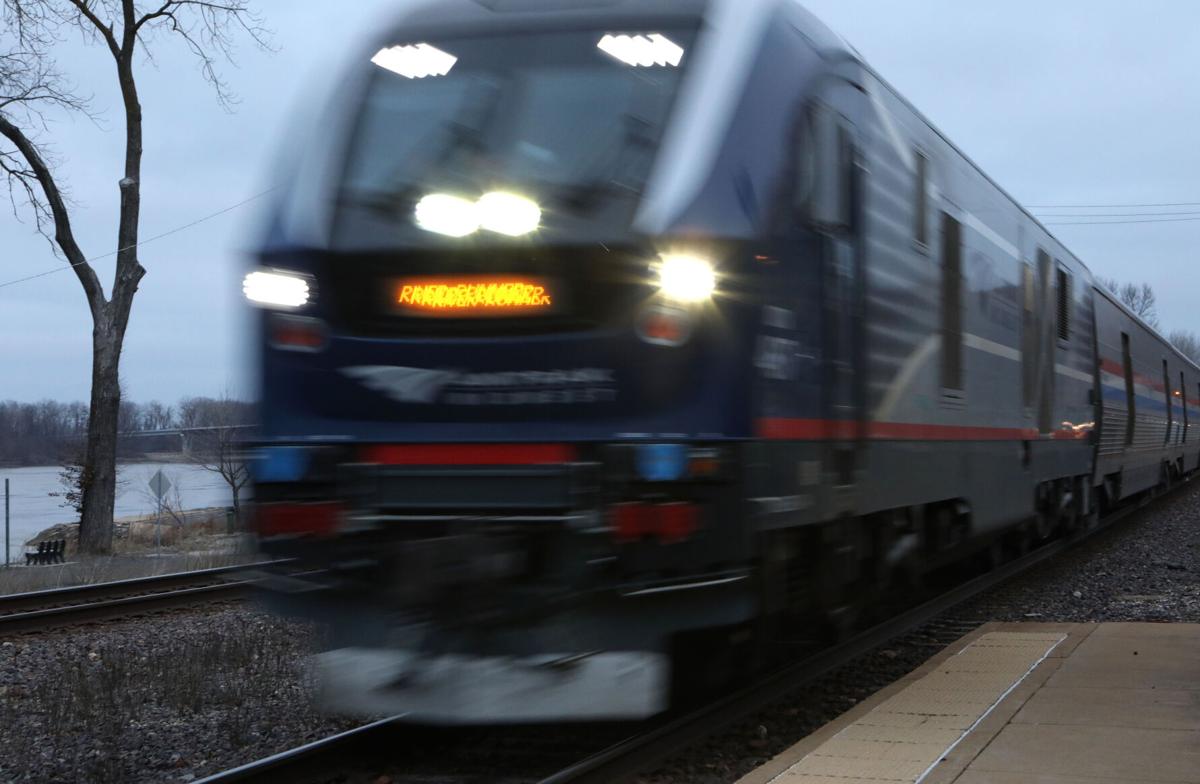 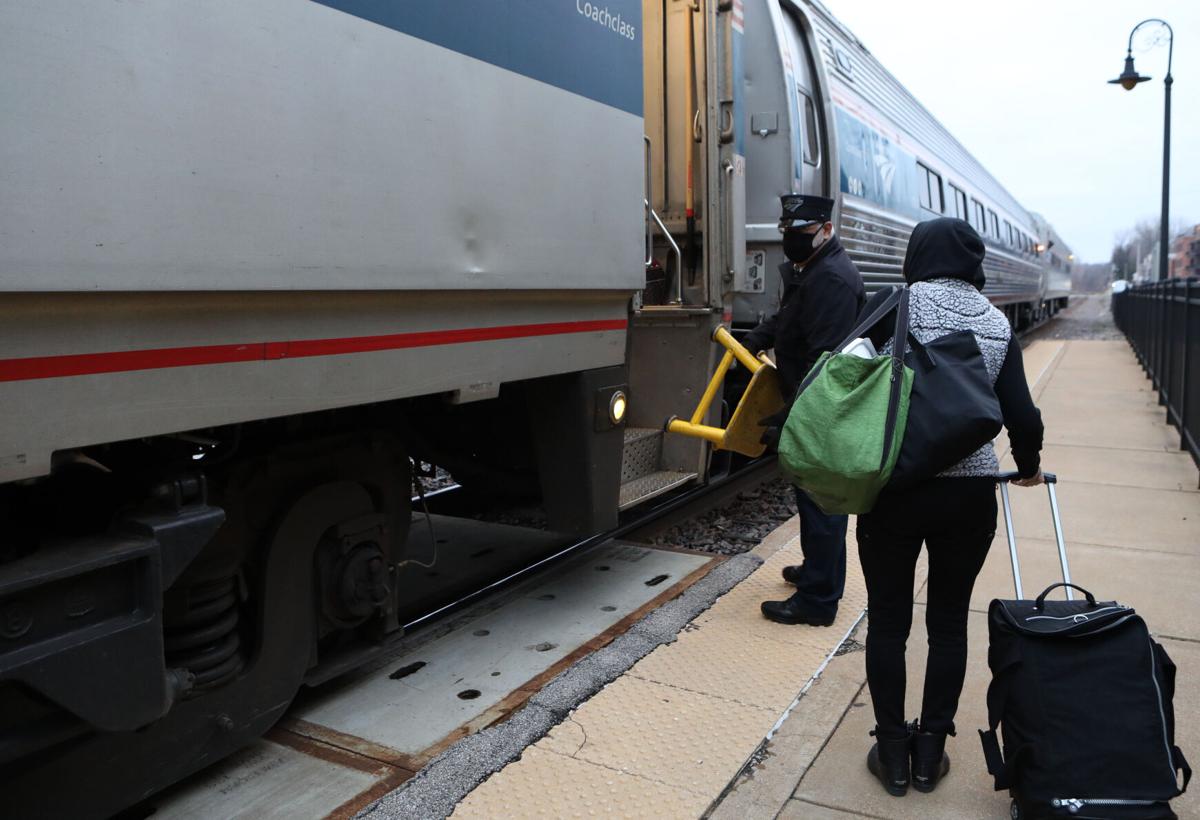 Dolores Toby, right, waits for an Amtrak employee to set down a stool before she boards the 5 o’clock train for Kansas City Monday, Feb. 1, in Washington. Toby was visiting family in Defiance and said she rides the Amtrak train at least once a month.

Dolores Toby, right, waits for an Amtrak employee to set down a stool before she boards the 5 o’clock train for Kansas City Monday, Feb. 1, in Washington. Toby was visiting family in Defiance and said she rides the Amtrak train at least once a month.

Members of the Missouri House of Representatives’ Budget Committee approved last week a proposed budget that would slash Amtrak funding, causing the railway to reduce the number of trains operating between Kansas City and St. Louis.

Under the proposed budget, passenger rail service would be cut to one round-trip train per day. Prior to COVID-19 reductions, Amtrak had been operating two round-trip trains per day on the route.

Craig Mueller, a member of the Washington Area Highway Transportation Committee, said on Monday that the proposed budget is for $9.85 million. It would cost the state at least $12.65 million for two trains making two trips per day. The Missourian left messages with Budget Committee Chairman Rep. Cody Smith, R-Carthage, who first floated the idea of reducing train service, but did not hear back.

According to Amtrak passenger records, approximately 172,000 people ride the train each year. From 2017 to 2019, more than 12,000 passengers boarded the train annually at Washington’s downtown station. The number of passengers using the rail service fell in 2019 after flooding temporarily suspended train departures and in 2020 due to travel restrictions associated with COVID-19.

“The obvious concern is that ridership is going to stay low if it doesn’t return to a full-length service which is on some kind of schedule that is practical for people to use,” Mueller said. He said some have suggested cutting trains on Monday and Tuesday in order to double the number of trains operating during the weekend.

“There are some discussions on how to use the money from the state, but I don’t know where that is going to end up,” Mueller said.

The state contracts with Amtrak to provide rail service, though lawmakers have for years short-changed the railway. In 2017, for example, former Gov. Eric Greitens cut $500,000 in funding for the service. The state also hasn’t paid Amtrak its fair share of the bill since at least 2010 and owes an estimated $3 million.

In addition to operating the Missouri River Runner, Amtrak also made a series of improvements along the corridor including station upgrades, additional safety measures and other upgrades.

Since its founding in 1971, Amtrak has operated as a quasi-public corporation to operate many U.S. passenger rail routes. Amtrak receives a combination of state and federal subsidies but is managed as a for-profit organization.

Even without as many passengers, officials say there is no denying the economic benefit that twice-a-day round-trip train departures have had on Washington and across Missouri.

“(Reducing the number of trains) has an obvious impact on how our visitors come to Washington, which impacts our economy. We see quite a bit of foot traffic in downtown Washington from Amtrak, especially families with children. It would be a big loss to Washington to see cuts made,” Washington Mayor Sandy Lucy said.

Washington Area Chamber of Commerce Tourism Director Emily Underdown said the “ideal situation for Washington and tourism is for two trains per day each way.”

Losing that service, Underdown said, would require the chamber to make adjustments on how it promotes the city and region as a tourism destination. Based on statistics compiled at the Washington Visitor Center, Underdown said the city sees an influx of Amtrak passengers during different festivals and events, including Music at the Market and especially the Town & Country Fair.

According to an economic impact study released this year by the Missouri Department of Transportation, the Missouri River Runner annually generates more than $208 million in economic activity statewide and creates 1,250 jobs. Passengers on the River Runner spend an estimated $12.8 million in hotels and an additional $25.3 million in food and sightseeing costs each year. This economic activity contributes to an estimated $11 million in federal, state and local tax revenue, according to the study.

Approximately 56 percent of the passengers who responded to the survey say they use the River Runner as a way to visit friends or family. Thirteen percent of passengers say they board the train for recreation or leisure travel, and 11 percent say they use Amtrak for work or business-related travel. Other reasons for using the train are: vacations, 8 percent; personal or family events such as weddings or graduations, 6 percent; traveling to or from college or school, 5 percent; and shopping, 1 percent.

“Pretty much any reason that you might take Interstate 70 in Missouri is a reason that people will use the Missouri River Runner,” Amtrak spokesperson Marc Magliari told The Missourian last year.

Despite the potential cutback, Magliari said Amtrak plans to introduce its new passenger cars to the route later this year. He said if Missouri lawmakers and MoDOT were to reverse course and decide to restore twice-daily round-trip service that it would take Amtrak between six to 12 weeks to schedule and resume that schedule.

The release of the economic impact study comes as MoDOT continues with the planned release of its 2021 State Freight and Rail Plan, which is expected to be made public in October 2021. A draft copy of the plan, which will include a needs assessment and other strategies, will be released in late July or August.

Amtrak to restore twice a day train service next month

As expected, Amtrak ridership in Missouri has jumped since the Missouri River Runner line re…