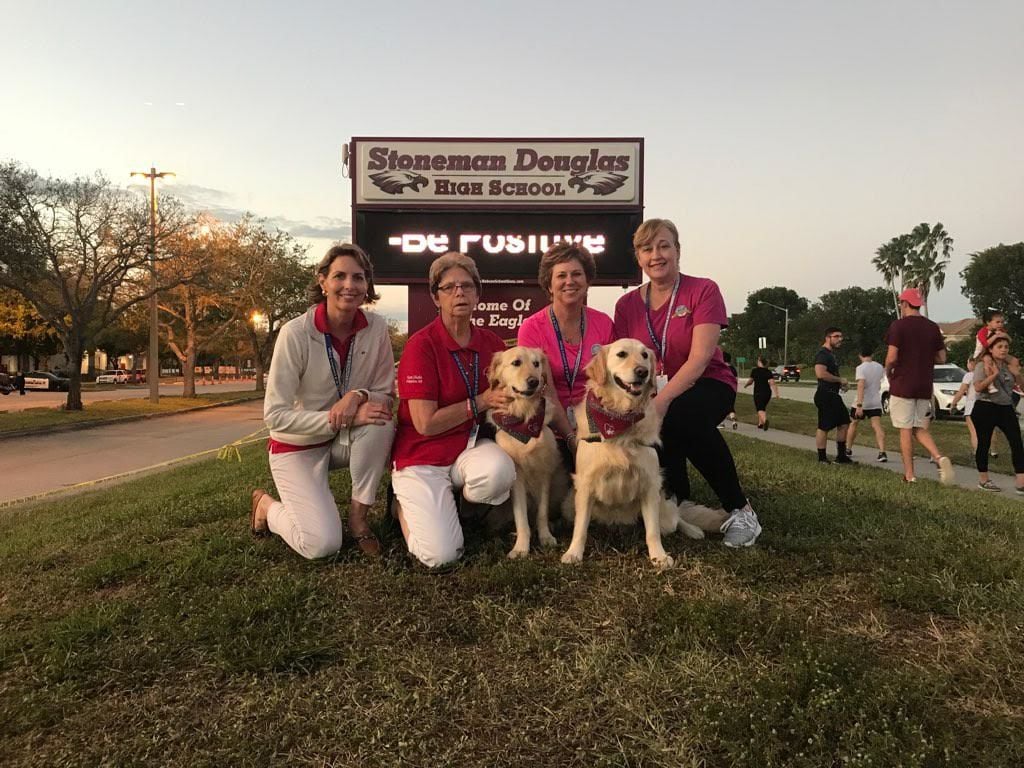 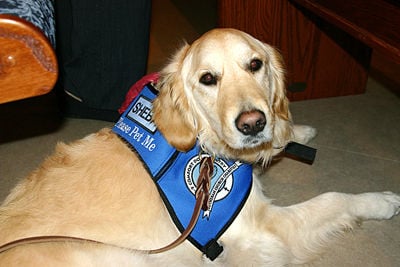 Roughly 1,200 miles from her hometown of Washington, in the media center of Marjory Stoneman Douglas High School, Sheba, Immanuel Lutheran’s comfort dog, lays on the floor with a laughing student whose tears have started to dry.

“You could tell by the look on the counselor’s face it wasn’t going well,” said Susie Blatt, one of Sheba’s handlers. “That’s when we approached her.”

Blatt and Wilma Adams, another handler, saw the situation, and they knew Sheba could do what they or the counselor couldn’t.

“You can’t pet a dog without smiling, even if it’s just a moment,” said Blatt. “It’s a moment of escape for people. It doesn’t take away the pain, but it takes them to a better place for a moment.”

Only a week before Sheba came to Parkland, Fla., the students of Marjory Stoneman Douglas High School hid in their classrooms, frantically exchanging fearful texts with their parents as a gunman made his way through the hallways of their school, killing many who crossed his path.

With 17 dead, the shooting would end up being one of the deadliest in American history.

Sheba, a certified comfort dog far from home, was on a mission to try to give students a reason to smile again.

“She brought some light and happiness to people,” Blatt said. “There were so many smiles she put on people’s faces — people who hadn’t smiled in a long time.”

As students stepped into Marjory Stoneman Douglas High School for the first time to collect backpacks and speak with grief counselors Sunday, Feb. 25, Sheba and several other comfort animals from around the nation were there to help pick up the pieces.

Sheba is a LCC K-9 Comfort Dog Ministry purebred golden retriever, which means from the time she was eight months old, she has been taught to put people at ease. She has worked in Washington for the past two years with Adams and Blatt, who is the “Top Dog” or coordinator of the ministry, doing everything from greeting students as they come to school to spending time in assisted living homes, comforting patients.

Sheba was one of 10 comfort dogs from the ministry who heeded the call and traveled to Parkland, Fla., in the days following the shooting. The dogs arrived Sunday, Feb. 18, and departed from Florida Monday, Feb. 26.

Blatt, Adams and Sheba were set to head home earlier in the week, but the day of their departure they were asked to stay and visit the students as they came to school.

“When you hear about tragedies like this, you want to do something, everyone wishes they can do something, but there isn’t usually much you can do,” Blatt said. “This is something we could actually do that brought a measure of light and hope to a very dark situation.

Returning to school and the grief counseling for those who partook, was tough for survivors of the shooting, she said. It was an early step on the long road to recovery and for some students, like the girl Sheba comforted, she added.

“The healing process has started but there’s a long road ahead,” Blatt said.

She said people were grateful for Sheba and the other dogs’ presence. Even more so when they found out how far Sheba had come just to put a smile on people’s faces. Blatt said there was no greater reward than seeing a Marjory Stoneman student smile.

“There was so much gratitude that the dogs were there and helping in a way only gentle animals can help people,” she said. “They help people in a way people can’t always help each other. It may just be a brief moment, but it’s an important moment.”

Blatt said in times of crisis, Sheba does her best work. For the students of MSDHS, she said, Sheba was a ray of sunshine on another of many cloudy days.