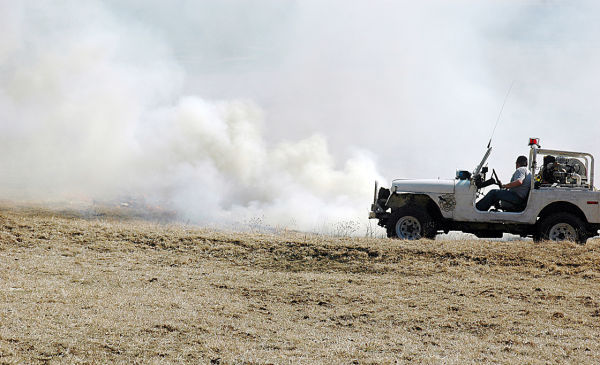 A firefighter sitting in a brush truck eyes part of the massive brush fire that burned acreage inside the Little Indian Creek State Forest in southern Franklin County on Monday. The fire also spread outside the conservation area to nearby fields. 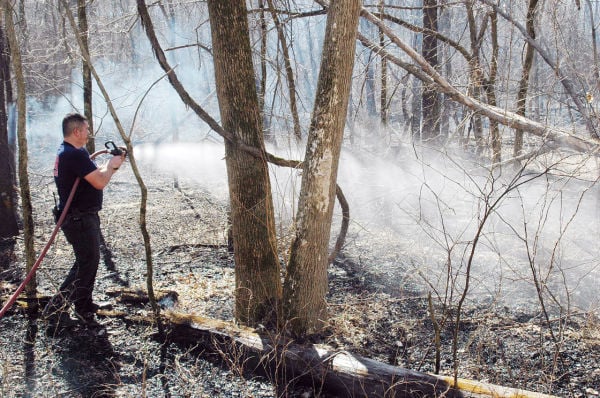 A firefighter sitting in a brush truck eyes part of the massive brush fire that burned acreage inside the Little Indian Creek State Forest in southern Franklin County on Monday. The fire also spread outside the conservation area to nearby fields.

As many as 100 firefighters from several area departments, the majority of whom were from St. Clair, needed about 3 1/2 hours to bring a massive brush fire under control in the Little Indian Creek State Forest in southern Franklin County on Monday afternoon and evening.

All told, St. Clair Fire Protection District Chief Les Crews said about 40 units were dispatched to the scene, the majority of which were brush and tanker trucks.

Because of the size and type of the fire, a tanker task force was set up at the intersection of Highway K and Old Highway K a couple of hours after the fire initially was reported. Access to the fire was gained from Little Indian Creek Road, which runs through the conservation area southeast of Highway K.

As many as five tankers were on standby to supply water as needed.

There were no injuries, and no structures were involved. The fire burned through the northern section of the state forest.

“The fire started on the south side of the road (Little Indian Creek),” Crews told The Missourian. “The wind really aided it, and it jumped the road and rapidly headed north up and over a hill.”

Winds in the area gusted as high as 20 mph on Monday afternoon and evening.

Crews estimated that at least 50 acres burned. Firefighters used leaf blowers and rakes as well as water to fight the fire and build a fire line.

“We eventually were able to get ahead of it and create a fire line,” Crews said. “Everyone on the scene did an outstanding job and worked together. It was a cooperative effort.”

A nearby narrow access road leading from Little Indian Creek Road north up and over the hill also was used by brush trucks to gain access to the fire as it spread north.

“The terrain on the north side was really rugged,” Crews said. “That made it a challenge to fight the fire.”

Besides being hilly, the terrain featured heavy brush, trees and leaves.

Early on, the fire spread to a field located just outside of the state forest on the south side of Little Indian Creek Road. Personnel using brush trucks were able to fight and extinguish that part of the fire relatively quickly.

The tankers were used to refill the brush truck tanks, which Crews said usually hold between 100 and 200 gallons of water.

Once the fire was determined to be under control between 5:30 and 6 p.m., units gradually were released. The final St. Clair crew left the scene at about 8 p.m.

There was a prescribed burn in the state forest on Friday, but a conservation official said the two fires were not related.

“There is absolutely no connection at all,” Missouri Department of Conservation officer Gus Raeker told The Missourian on Tuesday morning. “We were watching our burn very closely, and it was in a separate part of the (conservation) area.”

Raeker said another controlled burn was planned for Tuesday.

“We’ll have a lot of people around watching that one, too,” he said.

Crews said the cause of Monday’s fire is unknown at this time.

Making matters worse on Monday were at least two other brush fires in the St. Clair district reported during the time firefighters were battling the Little Indian Creek blaze.

One was near Bethel Baptist Church between St. Clair and Lonedell. The other was on Deep Woods Road in the Piney Park area.

“Both of those were about 2 or 3 acres in size,” crews said. “And both quickly were brought under control.”

The chief said mutual aid units filling in at St. Clair as well as manpower from Little Indian Creek were dispatched to fight both of those smaller fires.