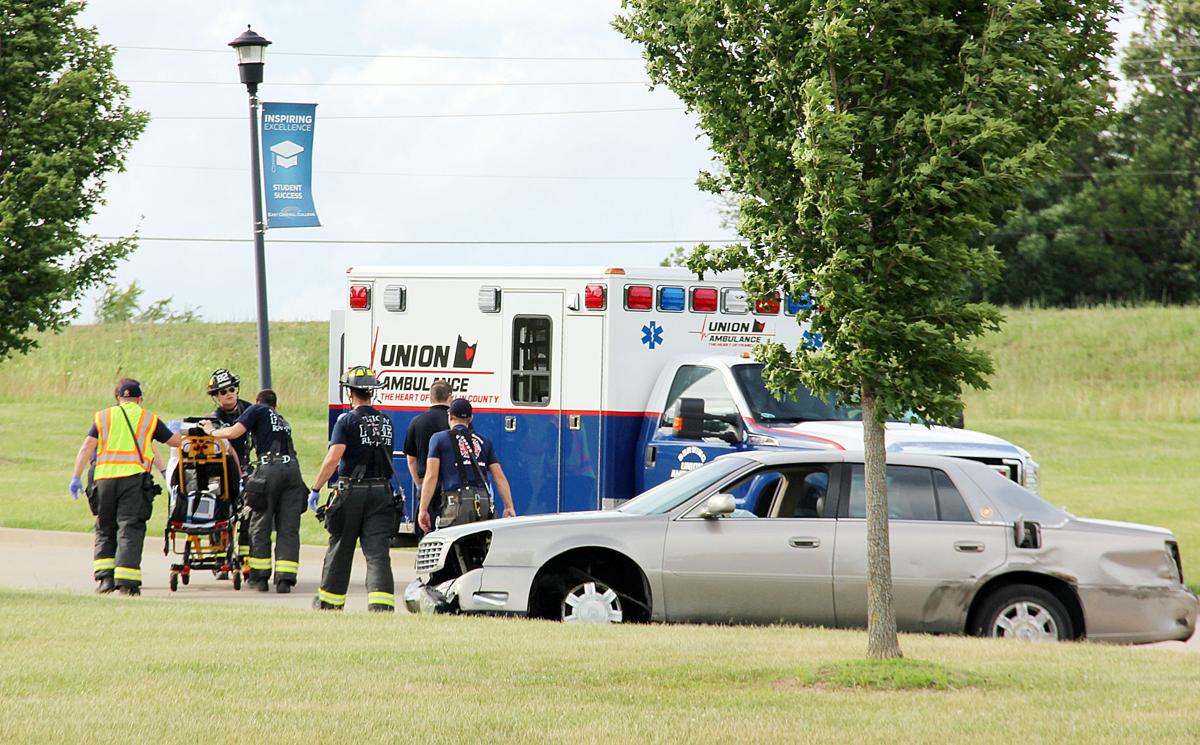 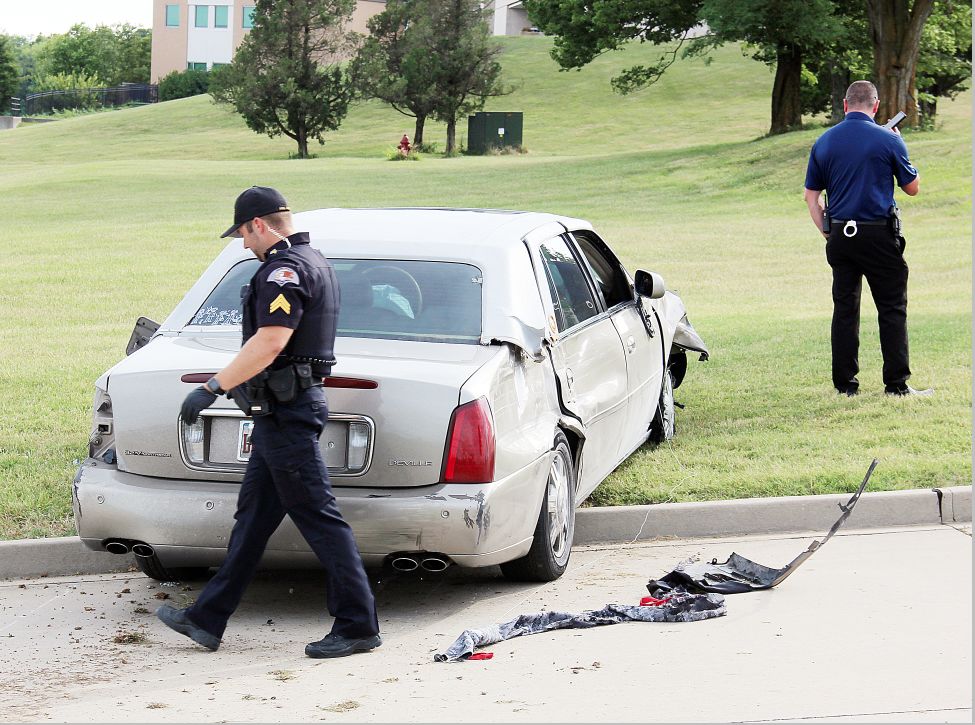 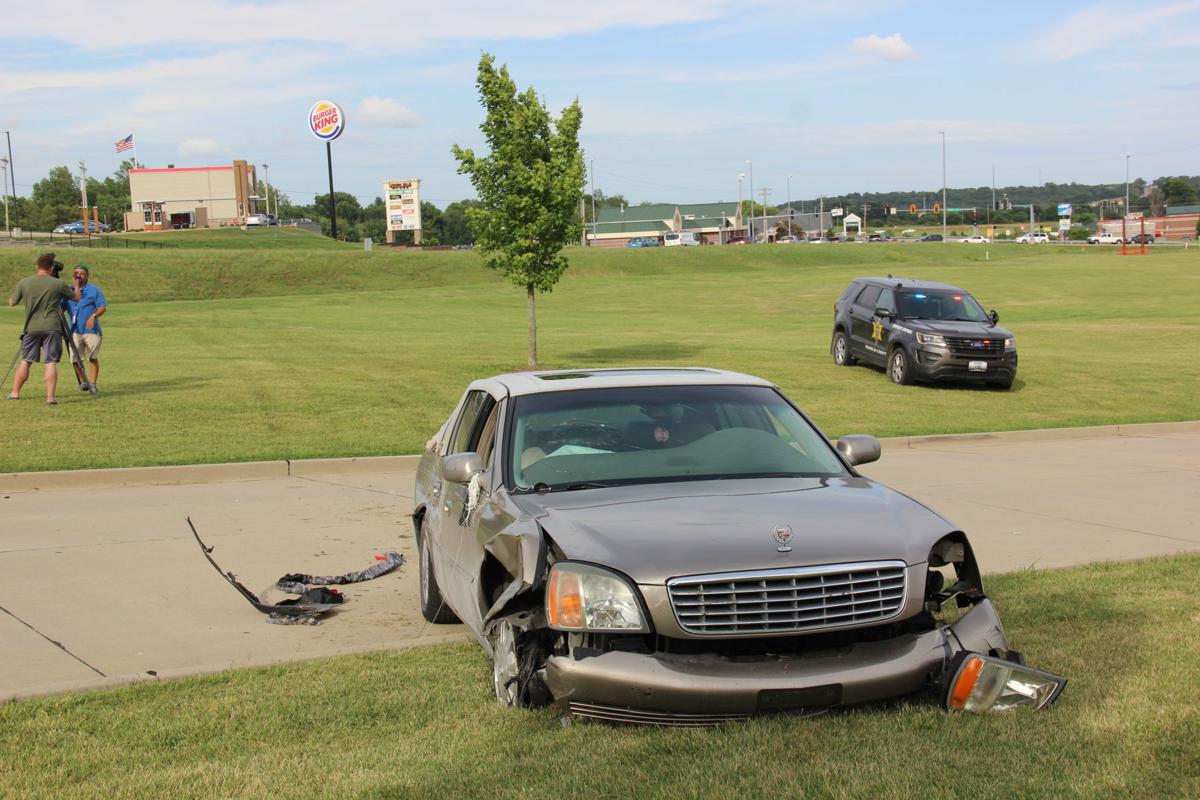 A police chase that started more than 50 miles away in Dupo, Ill., ended in a crash in front of East Central College in Union late Monday afternoon.

With the damage already done to the suspect’s tires, the speeds during the pursuit through Franklin County were 40 miles per hour or less.

Franklin County Sheriff Steve Pelton said his deputies joined the pursuit at the county line, which at one time involved 10 police units and two helicopters, when the 2004 Cadillac DeVille, driven by suspect Dustin E. Schlemmer, 31, Waterloo, Ill., crossed the county line on Interstate 44.

Franklin County deputies mainly paralleled the Cadillac on the outer roads along the interstate, in case Schlemmer attempted to exit.

Franklin County deployed spike strips near the Gray Summit exit, Pelton said spike strips were deployed two more times, either on the intestate or along Highway 50 in Union, as the pursuit progressed.

The pursuit was initiated by the Dupo officers after Schlemmer allegedly hit a Dupo police vehicle in Illinois.

Pelton said Schlemmer purposely left Highway 50 in Union, driving across a large lawn and striking a curb at ECC, to avoid police. The move resulted in a crash, since more than one of the car’s tires were flattened from the spike strips.

Schlemmer exited the vehicle through the window and was quickly taken into custody by Dupo officers. A passenger, Maudarie Danielle Forbes, 29, O’Fallon, Ill., was treated for injuries to her knee and neck.

Pelton said both the driver and passenger had felony warrants out of Illinois, in addition to the new charges filed by Dupo and the Highway Patrol.

Forbes was arrested on a possession of a controlled substance charge, as well as warrants for amphetamine and marijuana possession charges in Saline County, Ill., Thompson said.

Both Schlemmer and Forbes were taken by Union Ambulance to Mercy Hospital Washington with minor injuries, according to the Missouri State Highway Patrol.

After the pursuit started around 3:30 p.m., it continued over the J.B. bridge into Missouri, then up Interstate 55 through downtown St. Louis, Thompson said. Schlemmer led officers onto Interstates 70, 170 and 270 before heading west on Interstate 44 and into Franklin County.