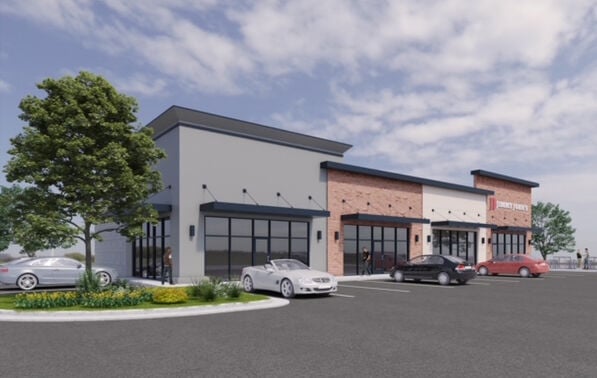 Pictured is a 3D rendering of the planned strip mall that will be opposite the J.C. Penney in Washington.

Pictured is a 3D rendering of the planned strip mall that will be opposite the J.C. Penney in Washington.

Torrey Woodcock, of Bourbon, is moving forward with his plans to build a new strip mall in one of Washington’s oldest shopping centers.

Last week, Woodcock released renderings of the strip mall he plans to build on the north side of the J.C. Penney parking lot along Highway 100. Woodcock said he hopes the construction will be finished this summer.

The planned 6,272-square-foot building will have space to house four businesses, though Woodcock has claimed two spaces for his own ventures.

He is bringing the Sullivan-based American Pie Co., which also has a Rolla location, to Washington and is moving his Jimmy John’s franchise from the Phoenix Center to the new strip center, where it will have a two-lane drive-thru. Woodcock also owns the Jimmy John’s franchises in Union, Sullivan and Rolla.

Woodcock said he is in negotiations with potential tenants but declined to give details.

The architecture process is nearing completion, Woodcock said, and development is planned to begin in late February or early March, depending on weather. Construction would take about six months, but he said it would be later in the year, if not 2023, before the businesses would open their doors.

According to the city’s building department, Woodcock has not yet filed building permits. Once the building is approved and the permits issued, Woodcock would have a year to construct the mall.

Developer could receive building permits as soon as Tuesday

Responding to a growing community, the Goodwill store in Washington is moving to a bigger space, according to Mark Kahrs, executive vice presi…