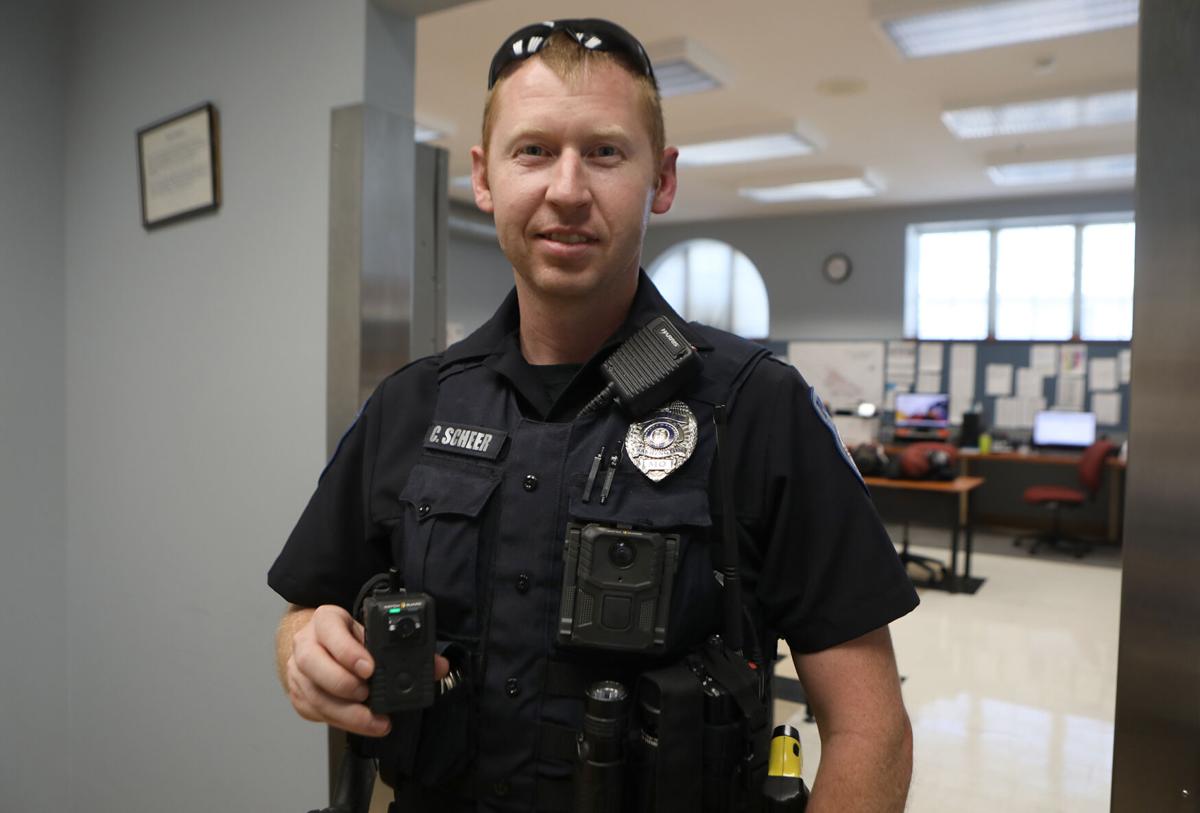 Washington Police Officer Charles Scheer holds one of the current body cameras that the police department uses Sept. 16 at the police station. The department is planning on purchasing new body and dash cameras from Axon, a technology and weapons company for military, law enforcement and civilians. 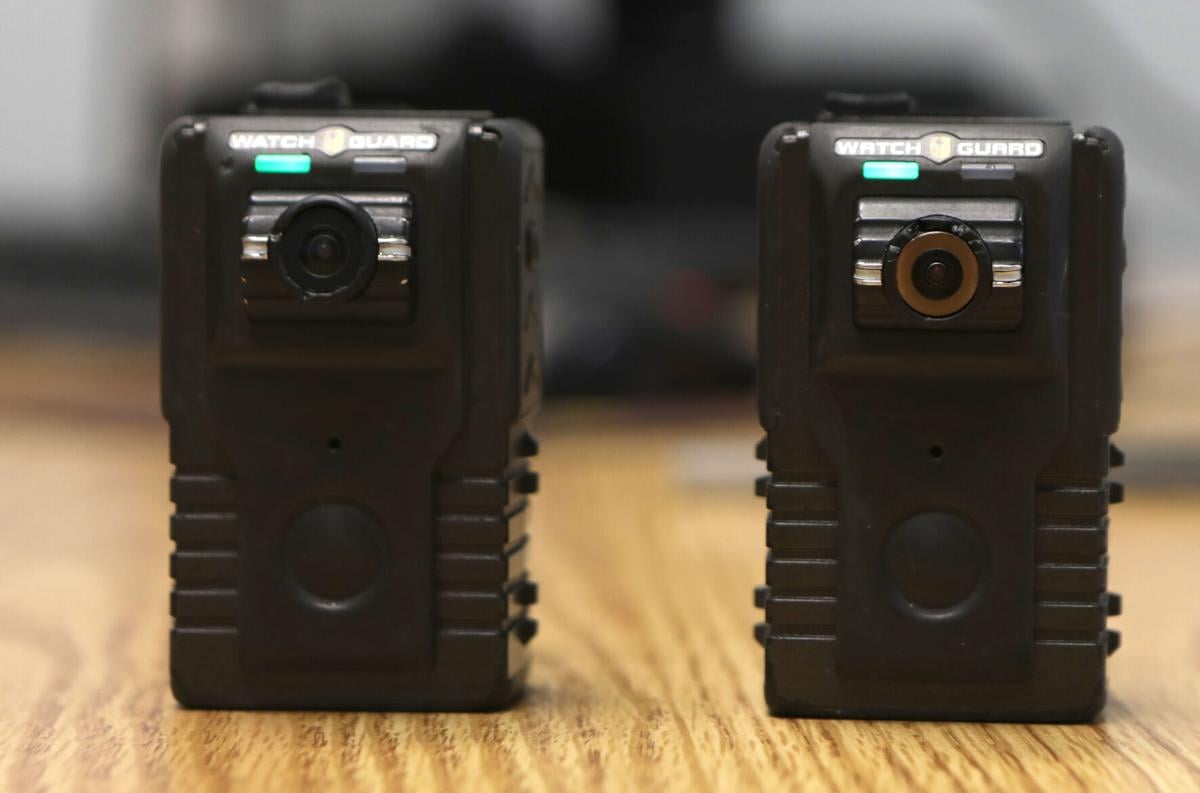 Two of the current Washington Police Department body cameras lay on a desk Sept. 16 at the police station. Once the new body and dash cameras arrive, the department is hoping to sell the current equipment.

Washington Police Officer Charles Scheer holds one of the current body cameras that the police department uses Sept. 16 at the police station. The department is planning on purchasing new body and dash cameras from Axon, a technology and weapons company for military, law enforcement and civilians.

Two of the current Washington Police Department body cameras lay on a desk Sept. 16 at the police station. Once the new body and dash cameras arrive, the department is hoping to sell the current equipment.

The department is receiving 21 body cameras, one for every road officer and one for every school resource officer, and 14 dash cameras, one for each car, from police technology company Axon, according to Lt. Mark Lindgren, who was responsible for handling the purchase. The body cameras are expected to arrive by the end of the month, and a representative from Axon will come to Washington to install the new dash cameras.

“I’m excited about it,” Lindgren said. “I can’t wait to get these in and get them going.”

Lindgren said that the department has caught numerous crimes with the use of cameras. They’ve used them to go back and verify whether a person was making a traffic infraction or to review a DUI stop. But they’re also used when there is a complaint against an officer to verify whether that complaint is legitimate.

Once the cameras arrive, Lindgren said the department will conduct trainings on how to use the new cameras.

The money for the cameras comes from the city’s general revenue funds. Those funds were freed up after COVID-19 relief funding took care of payroll expenses.

Washington Police Chief Ed Menefee told the Washington City Council Monday that the battery life of the current equipment was low, causing officers to have to return to the police department midway through their shift in order to charge or pick up a charged body camera or dash camera.

“Reliability is another issue,” Menefee said. “There have been issues with downloading videos from our system to files that we need to send to the prosecutor’s office, which is a major issue.”

Menefee also said the Axon camera footage is “much better recording, has better clarity, especially in the voice recording.”

Battery life and downloading was just one problem that the department had with the current equipment, which was manufactured by WatchGuard, according to Lindgren.

“I was constantly calling their IT department,” Lindgren said. “Things just weren’t jelling. They were getting old, and it cost more to upgrade them than what Axon would be.”

When one of the WatchGuard cameras would stop working, Lindgren said, that meant the department was down a camera because they were no longer on warranty. Under the terms of the 10-year agreement, the Axon body cameras will be automatically replaced every two years at no cost to the police department. The dash cameras will be replaced every five and 10 years, also at no cost. If a camera breaks, it would be replaced by the company.

The new Axon cameras have many benefits, according to Menefee and Lindgren.

First, the new cameras archive video footage digitally on the cloud. Previously, Lindgren said, video was stored on a physical server. This upgrade will mean any officer can access footage from their smartphone. Lindgren said this could come in handy while officers are writing event reports because they can write the report on their computer while watching the footage of the event on their phone. Lindgren hopes the department can transfer older videos from the physical servers onto the cloud. That footage constitutes 13 terabytes of data.

The new cameras are also interoperable, meaning they interact with one another to allow officers to see footage from different cameras that were recording at the same time.

“That interaction and interoperability will be great for court and for officers writing reports,” Menefee said.

Plus, Lindgren said, if the department has any problems with the cameras, it can contact Axon, and the company will address the issue.

Lindgren said the department has actually used Axon cameras before. From December 2017 through August 2018, the department received them through a trial program in which Axon let them use the cameras for free.

Menefee said that Axon has other products the department might think about purchasing in the future. The department may also consider upgrading the cameras to have technology for license plate recognition and drones that are compatible and interoperable with the dash and body cameras.

The department hopes to sell its current cameras after being approached by other police departments interested in the WatchGuard cameras. Money earned from the sale of cameras would be put into the city’s general revenue fund.