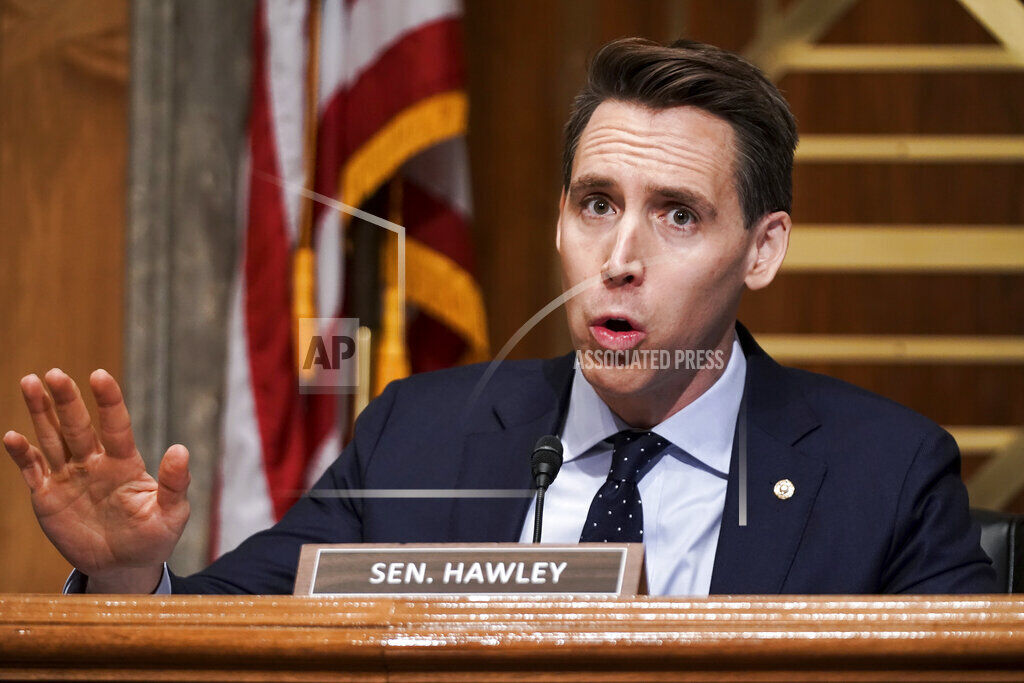 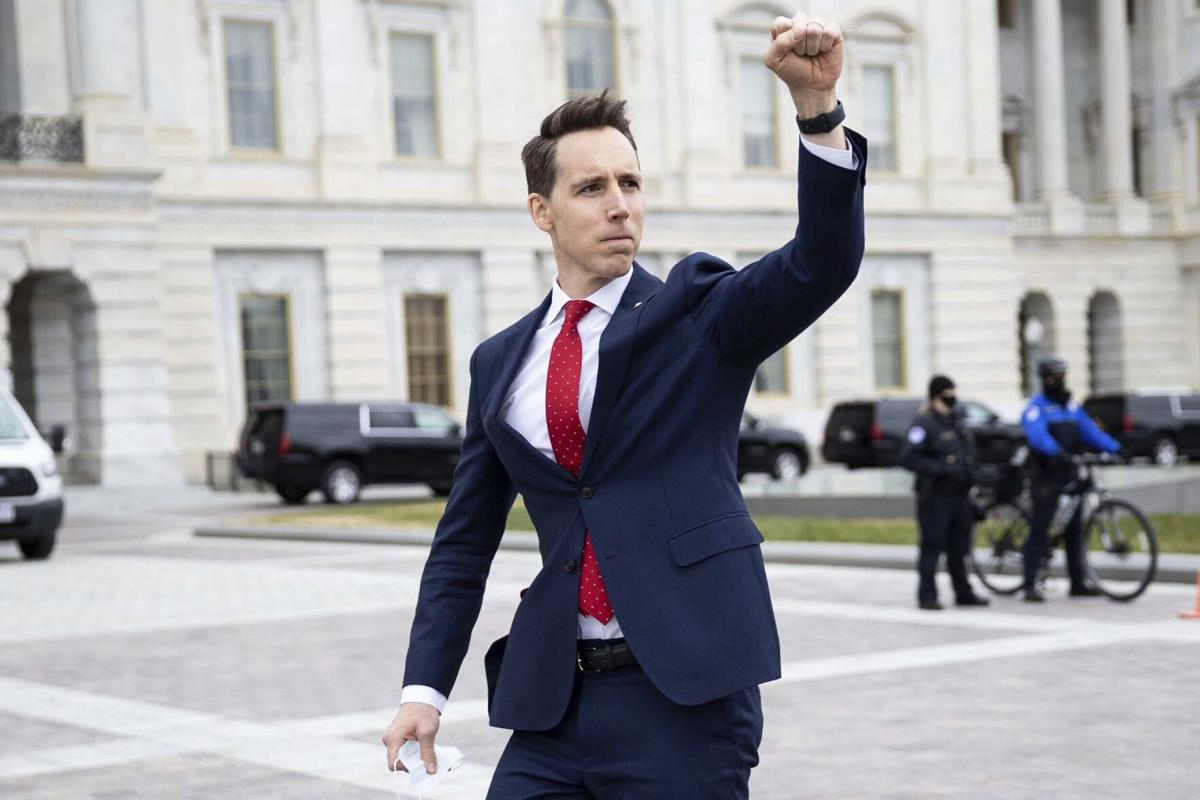 Sen. Josh Hawley (R-Mo.) gestures toward a crowd of supporters of President Donald Trump gathered outside the U.S. Capitol to protest the certification of President-elect Joe Biden's electoral college victory Jan. 6, 2021 at the US Capitol in Washington, DC. Some demonstrators later breached security and stormed the Capitol. (Francis Chung/E&E News and Politico via AP Images)

Sen. Josh Hawley (R-Mo.) gestures toward a crowd of supporters of President Donald Trump gathered outside the U.S. Capitol to protest the certification of President-elect Joe Biden's electoral college victory Jan. 6, 2021 at the US Capitol in Washington, DC. Some demonstrators later breached security and stormed the Capitol. (Francis Chung/E&E News and Politico via AP Images)

O'FALLON, Mo. (AP) — Republican Missouri Sen. Josh Hawley, facing waning support from longtime backers and donors in the wake of the attack at the U.S. Capitol last week, defended himself in a newspaper column Wednesday, accusing the media and “Washington establishment” of deceiving Americans into calling him an “insurrectionist.”

Hawley’s column appeared in the Southeast Missourian, a daily newspaper in Cape Girardeau, Missouri. It marked the first time Hawley, 41, has publicly defended himself since the brutal attack on Jan. 6 when a mob of President Donald Trump’s supporters stormed the U.S. Capitol following the president's rally.

Five people died, including a Capitol police officer, and lawmakers had to scramble for safety and hide as rioters rampaged through the building, delaying by hours the tally of Electoral College votes that was the last step in finalizing Democrat Joe Biden’s victory over Trump.

Hawley was the first senator to announce a challenge to the Electoral College results, and his challenge went on even after the attack. Concerns were also raised after a photo emerged of Hawley greeting protesters outside the Capitol with a raised fist, though that was taken before the mob stormed the building.

Hawley, in the column, noted that Democrats objected after losing the 2000, 2004 and 2016 presidential elections and were “praised for standing up to democracy.”

“This time around, anyone who objected has been called an ‘insurrectionist,'" he wrote. “Sadly, much of the media and many members of the Washington establishment want to deceive Americans into thinking those who raised concerns incited violence, simply by voicing the concern. That’s false. And the allegation itself is corrosive and dangerous.”

Other than Trump himself, no politician has suffered the fallout as has Hawley. Multiple donors have pulled financial support. Meanwhile, the Trump-opposing Lincoln Project said it would take out full-page newspaper ads calling out his remaining donors.

Email messages seeking comment from Hawley’s office Wednesday have not been returned.

The health care IT firm Cerner Corp. based in Kansas City, Missouri, said Wednesday that it will suspend contributions “to any candidate or official who took part in or incited violence last week in Washington, D.C.” Spokeswoman Misti Preston said the company isn’t “naming specific names,” but Cerner’s political action committee has donated $10,000 to a Hawley-sponsored PAC over the past two years.

Ameren, Edward Jones and the law firm have contributed to Hawley.

Walmart said Tuesday that its PAC “is indefinitely suspending contributions to those members of Congress who voted against the lawful certification of state electoral college votes.” Walmart gave nearly $1.2 million to federal candidates in the 2017-18 election cycle but none to Hawley, according the opensecrets.org website operated by the Center for Responsive Politics.

Hallmark Cards, based in Kansas City, earlier this week asked Hawley and Republican Sen. Roger Marshall of Kansas to return employee campaign donations. The company said its employees donated $7,000 to Hawley and $5,000 to Marshall during the last two years through its PAC.

Hawley, in his 739-word essay, said those involved in the Capitol attack must be punished, saying, “Mob violence is always wrong.”

“But democratic debate is not mob violence,” Hawley wrote. “It is in fact how we avoid that violence.”

Hawley wrote that he has heard from many Missourians concerned about election integrity.

“They have a right to be heard in Congress," he said. "And as their representative, it is my duty to speak on their behalf. That is just what I did last week.”

This story from The Associated Press has been corrected to show the Cerner comments came Wednesday, not Tuesday, and Ameren and Edward Jones commented late Tuesday, not late Monday. The story was also changed to show that the Bryan Cave Leighton Paisner law firm has no specific home base, rather than being based in Chicago.

Protesters Call On Hawley To Resign

McConnell Says He Is Unsure