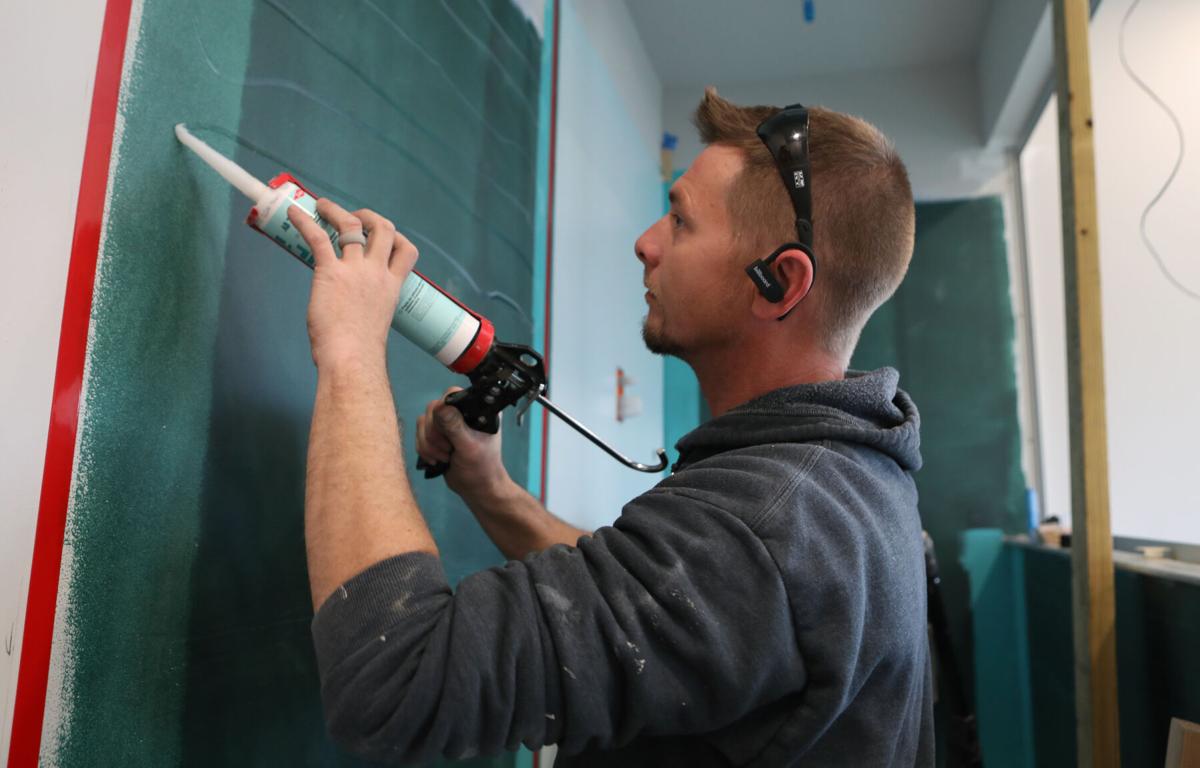 Jason Jones glues a shower wall before sticking a sheet of acrylic to it during renovations at the Sirens Hotel at 4 E. Main St. in Washington Monday, Dec. 28. The hotel is scheduled to open in February. 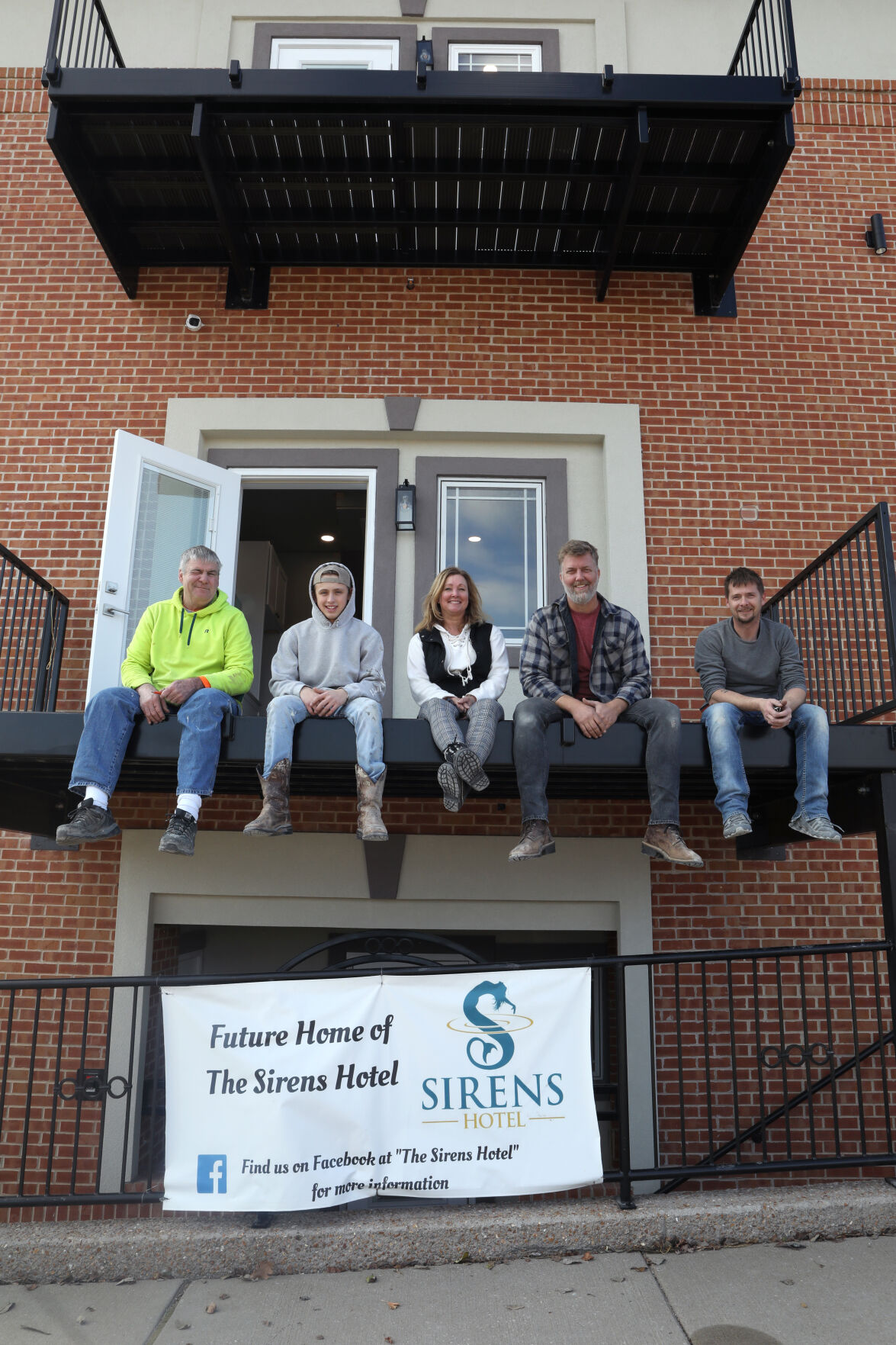 Jason Jones glues a shower wall before sticking a sheet of acrylic to it during renovations at the Sirens Hotel at 4 E. Main St. in Washington Monday, Dec. 28. The hotel is scheduled to open in February.

With about two months to go before its opening date, the only occupants currently in Sirens Hotel on 4 E. Main St. are the workmen.

The sound of construction is perhaps as far from a siren’s song as it could be, but the assembly is essential as the owners, a family of Franklin County natives, remodel the three-story building first built in 2006. On its tentative opening Feb. 14, it will be a modern, siren-themed accommodation.

Located with the Missouri River in view, the 11-room hotel will welcome business and weekend travelers with a modern style that is a “nod to the nautical,” co-owner and Washington native Chad Greife-Wetenhall said.

“We were inspired by the sirens of Greek mythology, that their song is so alluring that you’ll never want to leave,” he said. His hope is that the hotel attracts guests in the same way.

The theme stems from a multitude of shipwrecks that occurred before the 1950s, which is when the Army Corps of Engineers rerouted the Missouri River, he said. Before that many boats passing through would accidentally end up in shallow waters.

“We thought it was cool that just like in Greek mythology, shipwrecks happened all throughout the river, and we really wanted to pay homage to being a river town,” he said.

The 275-square-foot suites all include a kitchenette, bar and balcony, as well as a washroom and separate shower. They are all king-sized rooms, co-owner Lisa Greife said, but her favorite will vary slightly. It will have a king bed as well as a bunk bed consisting of two full-sized mattresses.

Each suite’s shape is different, and when it comes time to decorate, the art will be as well.

Greife-Wetenhall is also an art teacher at Washington West Elementary, and he is a brother to two of the co-owners: Nick and Dale. Together with Dale’s son Will, they form Greife Properties, which as a company owns half of the hotel. Lisa Greife, who is also Dale’s wife, owns the other half via her company LNE Properties.

“It’s been a family affair,” Lisa Greife said. “It seems like at our get-togethers, there’s a lot of discussion. Thanksgiving? We were talking about the hotel.”

She walked through the remodel literally and figuratively as she stood in the teal hallway discussing what was to come. They spent over $1 million to purchase and renovate the building, she said, which was financed with personal investment and bank loans. They started the remodel about one year before the opening date, and Lisa Greife and her husband are the designers and contractors.

Five blocks away, the Old Dutch Hotel and Tavern already provides 14 rooms for visitors, but Director of Tourism Emily Underdown said it’s “fantastic” that more space is being installed.

“People staying in Washington is the ultimate goal, and the ease and convenience of being downtown is an added benefit,” she said. “We can accommodate them, and this shows that Washington is growing.”

Prior to the Greifes’ ownership, the building was used as a call center and travel agency. In its final form, the building will welcome guests with LED lights and lively decor because, Lisa Greife said, they wanted to have a style that was different from other hotels in the area, which are more traditional.

“We didn’t want to go so far that it’s like a cheesy Long John Silver’s, but we wanted it to keep that modern feel but yet have a lot of differentiation,” Greife-Wetenhall said.

Coinciding with the modern atmosphere, there will be no check-in desk or receptionist, Lisa Greife said. Instead, guests will receive codes via text or email to unlock the front door and allow access into their rooms. The codes change with each visit as a safety precaution.

Those interested in staying at the hotel can book rooms on the website, sirenshotel.com, or go to Airbnb, Expedia, Hotels.com, or Booking.com.