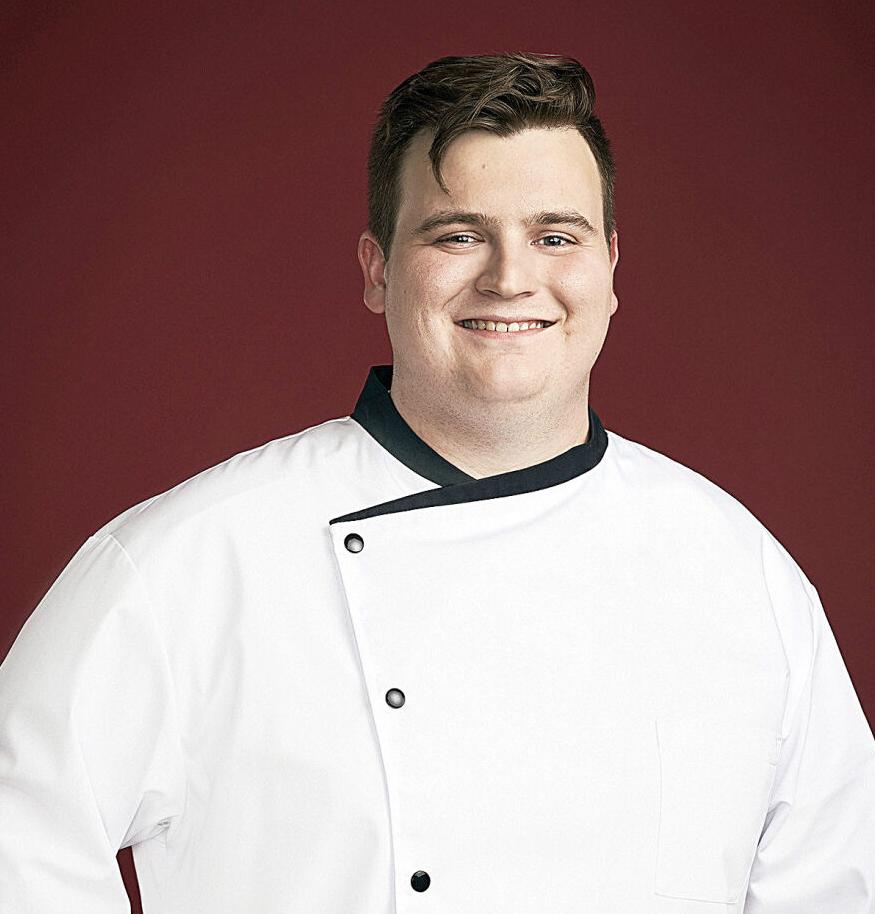 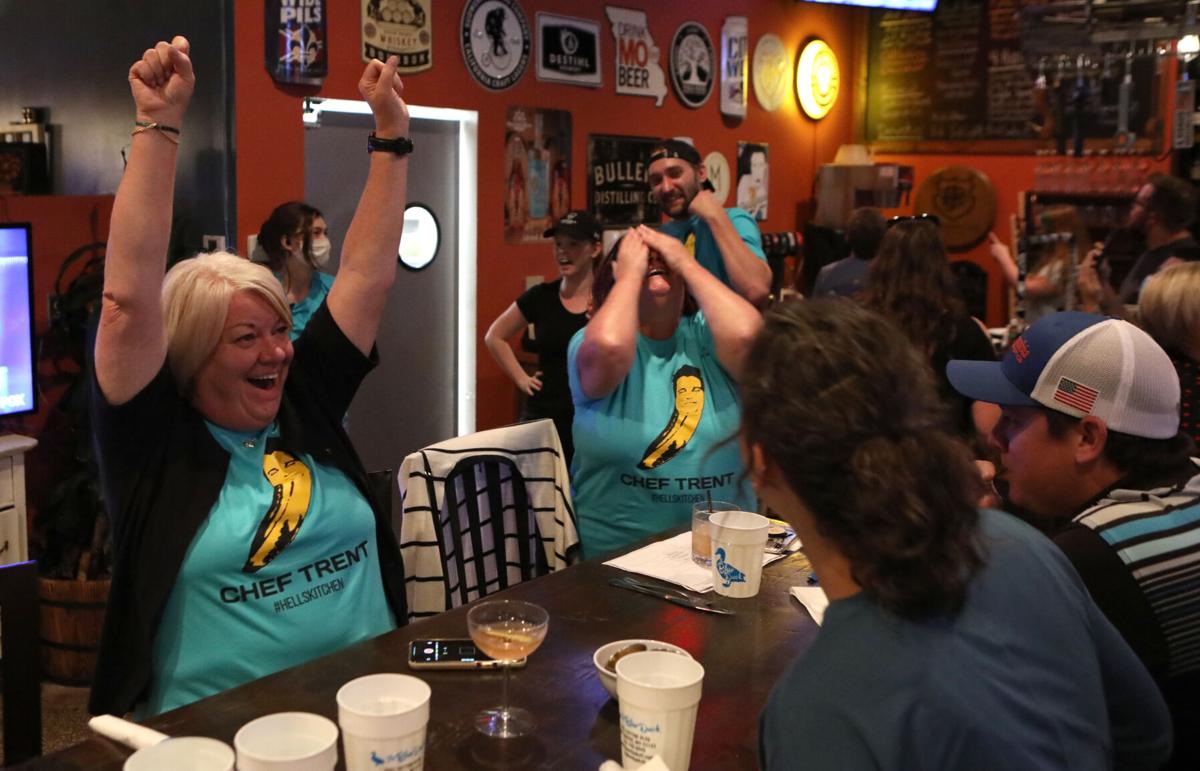 Sisters Merlene Gilb, left, and Christina Emory, center, erupt in jubilation with other people at the Blue Duck in Maplewood Sept. 13, 2021, while watching the finale of "Hell's Kitchen: Young Guns". The sisters had come to The Blue Duck for each watch party during the last season of the show. Trenton Garvey, executive chef at the restaurant, was the winner of the competition. 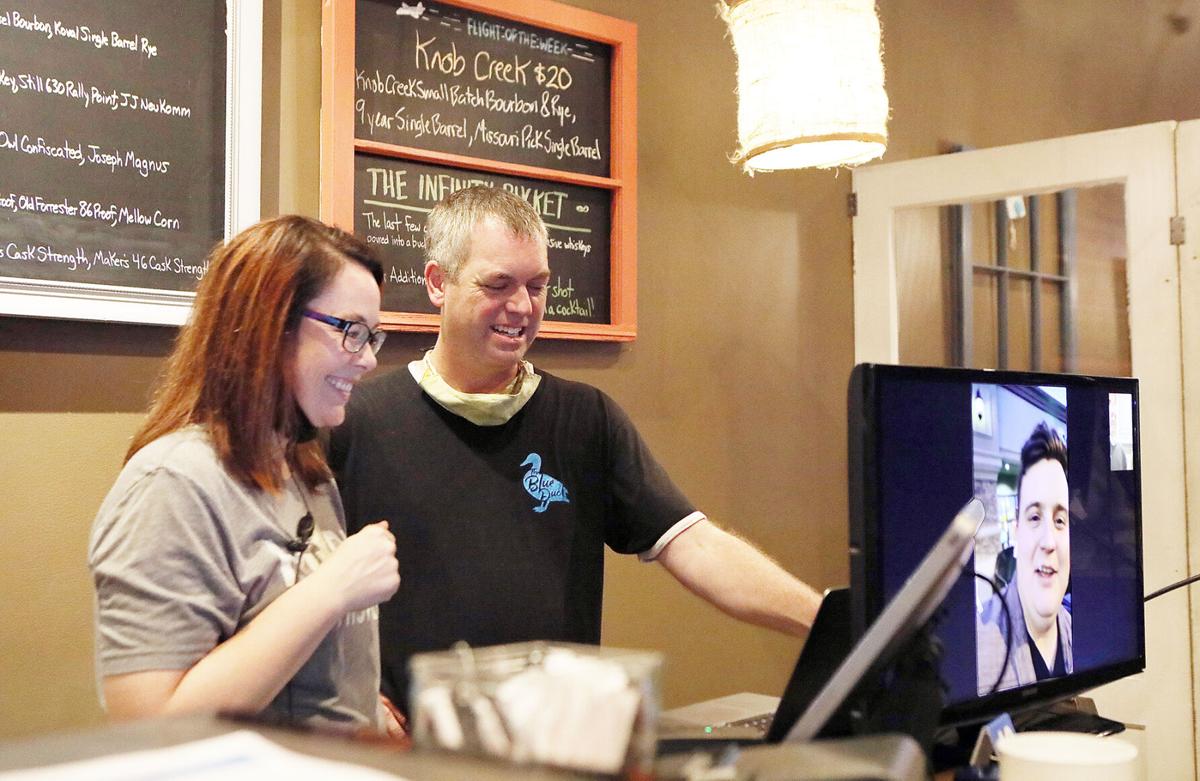 Sisters Merlene Gilb, left, and Christina Emory, center, erupt in jubilation with other people at the Blue Duck in Maplewood Sept. 13, 2021, while watching the finale of "Hell's Kitchen: Young Guns". The sisters had come to The Blue Duck for each watch party during the last season of the show. Trenton Garvey, executive chef at the restaurant, was the winner of the competition.

Prior to being cast on the 20th season of Gordon Ramsay’s “Hell’s Kitchen” on Fox, longtime Union resident and East Central College alumnus Trenton Garvey had never been outside of Missouri, Illinois and Arkansas.

After Monday’s whirlwind finale, however, Garvey, 26, will be packing his bags and moving to Las Vegas, where he will take the reins as head chef of the Gordon Ramsay Steak Las Vegas restaurant. Along with the new job comes a $250,000 prize and the opportunity to continue being mentored by Ramsay.

“Trenton is everything I could want in a protege,” Ramsay said in the episode.

The season was filmed in 2019, and Garvey and his family have had to keep his victory a secret until now.

Watching the episode with rapt attention were about 130 colleagues, friends and fans who crowded into the Blue Duck in Maplewood, where Garvey is executive chef. When he was revealed as the winner, the restaurant erupted into a chorus of cheers, chants and claps.

The Blue Duck owners Chris and Karmen Rayburn said watching Garvey made them feel like “proud parents watching their kid go off to college.”

“Trent has been with us over five years. He’s like our little baby, and we’re so excited for him to have this experience,” Karmen Rayburn told The Missourian after the finale. “He’s a very, very talented person, and we’re excited somebody else saw that talent. While we’re obviously sad to see him go, we’re so happy for him.”

After the season’s final two episodes aired back-to-back, Garvey, who had traveled to Las Vegas for a watch party with other contestants, video-called the Rayburns, and patrons huddled around the laptop screen to offer their congratulations.

“We’re so proud of you!” several people shouted.

Many in attendance at the Maplewood watch party have viewed every episode of the season, which began airing on Memorial Day, at the Blue Duck. Sisters Christina Emory and Merlene Gilb, of St. Louis, have come every week and gotten to know Garvey, who has chatted with patrons and answered questions at the Blue Duck following previous episodes.

The restaurant cheered even louder than when Garvey was revealed the winner when, in the minutes after he learned he’d won, the episode showed Garvey proposing to his girlfriend of then-nine years, Macee Jarvis, of Union. The two met in their freshman algebra class at Union High School.

“Me and Macee came from not a whole lot, but she always pushed me to be somebody,” Trenton told the cameras. Addressing Jarvis, he then said, “This has been incredible, and I just love you,” as he knelt down and held out a ring. She said yes — so the Scenic Regional Library Union branch manager will be joining him in Las Vegas.

“I’ve won in more than one way,” Garvey said in the show.

Garvey first began trying to get on “Hell’s Kitchen” in 2018. For Garvey’s audition, Pat Imig, who does digital marketing for the Blue Duck, filmed a day-in-the-life video in which Garvey talked about his favorite kitchen utensil, a cleaver knife that was a gift from Jarvis. From the day they found out Garvey made the show, the whole restaurant was rooting for him, Imig said.

Garvey was 23 when the “Young Guns” season wrapped, making him the youngest winner in “Hell’s Kitchen” history.

He trained under ECC chefs Ted Hirschi and Mike Palazzola and graduated from the program in May 2016.

Palazzola was also at the Blue Duck’s watch party and said later that he “couldn’t have been more pleased” and proud to watch his former student win it all.

“Being a competitor myself, I know what it’s like to put yourself on the stage like that. It’s not easy,” Palazzola said. “Trent having the drive and the determination to push himself further and further each episode ... that’s a message I want to send to my (current) students.”

Hagie’s 19 in Union, where Garvey once worked, also hosted a watch party attended by some of Garvey’s friends and family in Union.

For many watching across the metro area and country, Garvey’s victory was a delight but not a complete surprise. By the season’s midpoint, the chef had distinguished himself by scoring high in several cooking challenges and performing well during dinner services at the Gordon Ramsay Hell’s Kitchen restaurant at Caesars Palace, Las Vegas. In the season’s seventh episode, Ramsay pulled Garvey aside to offer words of praise, a rare move from a chef known for his harsh teaching style.

From then on, Garvey was a clear front-runner, becoming the first chef this season to earn a black jacket — a distinction awarded to only five of the 18 competitors. Garvey won every cooking challenge from that point on and was the first contestant to earn his place in Monday’s finale. His final dinner menu consisted of dishes inspired by his Missouri and Arkansas background.

While watching the episode Monday, Imig said that embodies who Garvey is.

“As talented and creative as he is, he is grounded, and he stays true to his roots,” Imig said. “He’s got such a creative mind that you can’t replicate. He’s an artist. I’ve never seen anyone cook like he does.”

The 20th season of “Hell’s Kitchen” finished with a bang Monday night, and a Union man is walking away with the top prize.