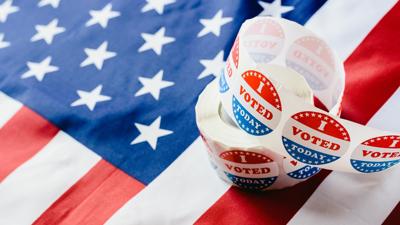 In-person absentee voting to continue to through Nov. 2

Mirroring trends reported elsewhere in the St. Louis-metro region and around the country, the number of Franklin County voters casting their ballots early is at historic levels for an election in modern history.

“Talking to the other (area) clerks, we’re right on target,” Baker said. “Everybody’s got about 10 percent of that turnout.”

This includes 2,900 absentee and mail-in ballots that had been submitted and returned, as well as the 2,063 people who have voted in-person at the county clerk’s office.

Per county records, a total of 4,000 people had voted early in Franklin County prior to the last presidential election in 2016. This figure includes both absentee and in-person voters.

While the deadline to request a mail-in ballot has passed, voters can still vote in-person and by absentee through Monday, Nov. 2, at the clerk’s office, 400 E. Locust St., in Union. The office, which is open during the week, also will be open from 8 a.m. to noon for in-person voting Oct. 24 and Oct. 31.

While absentee ballots can be returned in-person, those voting with a mailed ballot must return it through the U.S. Postal Service. Both absentee and mailed ballots must be received by the county clerk’s office by 7 p.m. on Election Day, Nov. 3.

The number of voters casting their ballot is not the only record that the 2020 election may set this cycle as the county saw a triple-digit increase in the number of voter registrations this election cycle compared with 2016.

This cycle, the county saw voter registrations exceed 3,880 ahead of the October deadline.

Baker’s office averaged about 400 voter registration applications a day for a period, peaking around 500 applications, he said. The office had two workers dedicated to handling the applications to make sure they were processed on time and correctly, he said.

Baker said he has been happy with the turnout.

“The majority of the people have been pretty nice and accommodating,” he said.

While other election authorities are reporting long lines of early voters, Baker said the lines in the clerk’s office have not gotten more than 12 people deep or taken much more than 10 minutes to vote, Baker said. They have been able to move workers over to assist voters when needed.

Another election record that could be toppled this year is voter turnout.

In 2016, approximately 72 percent of voters participated in the election.

“That was a big election too, but I had a 71-year-old that voted for the first time this year,” he said. “There are people who have never voted before who have voted in this one.”

Turnout in the county could be bolstered by not just the presidential and gubernatorial elections, but also because there are two proposed constitutional amendments on the ballot. Other issues on the ballot that may influence turnout are a contested municipal judge race, a contested state representative race in the eastern region of Franklin County near Pacific and citywide ballot issues in New Haven and in Pacific.

In New Haven, the city is seeking voter approval to sell bonds to finance the construction of a new pool. Across the county, the Pacific Fire Protection District is seeking voter approval on a proposed tax levy of 27 cents on a $100 assessed valuation. Funds from the tax levy would enable the district to hire more full-time firefighters and help replace aging equipment.

Baker reminds people to be in line by 7 p.m. to be able to vote Election Day.

It remains to be seen if lines will get that long on Election Day.

The largest of Franklin County’s 41 polling places will have between 35 and 40 voting booths, while the smaller ones will have 20 to 25 booths, Baker said.