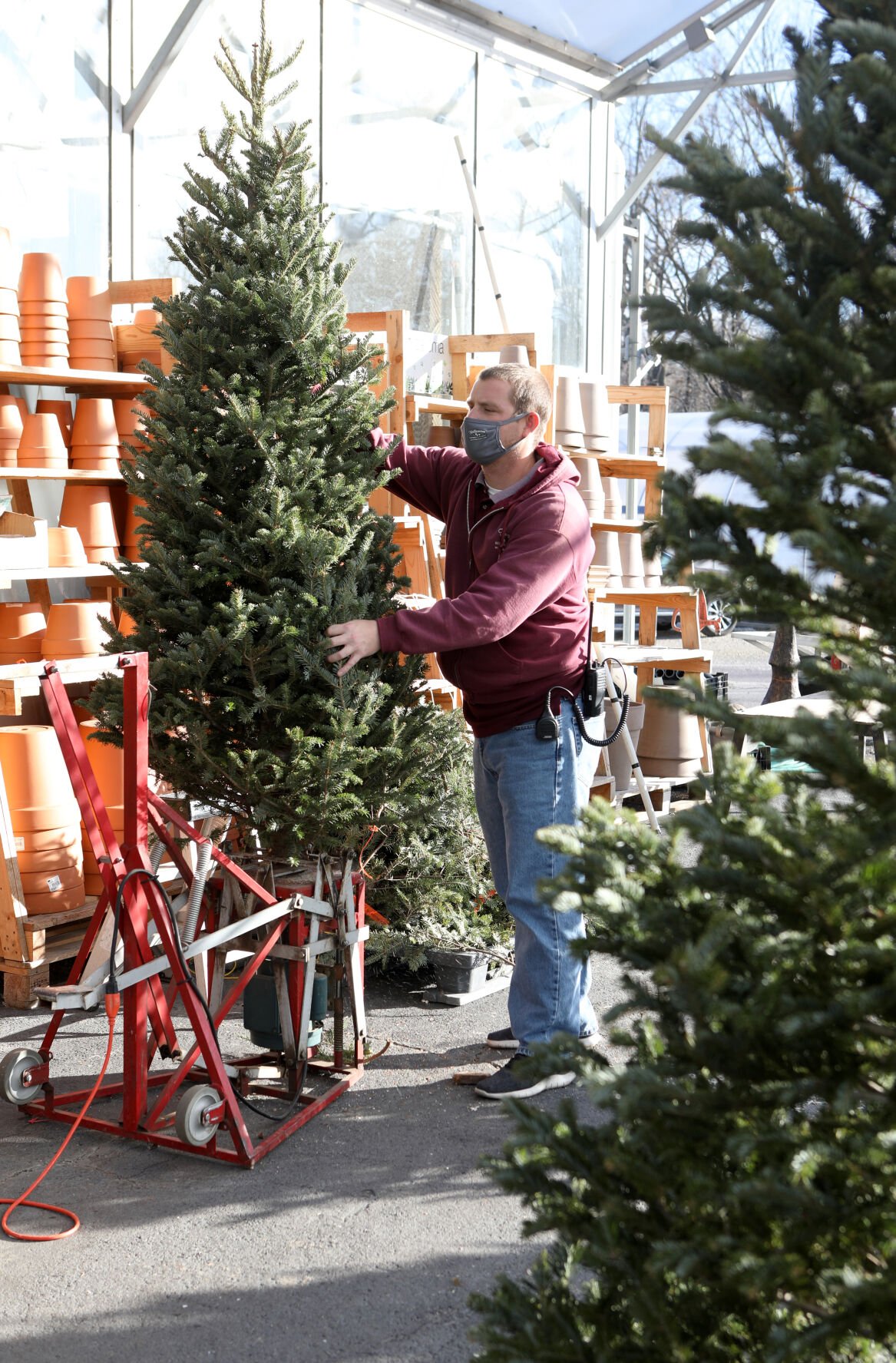 Marty Aide, a plant buyer at Hillermann Nursery & Florist, holds a tree steady as it's loaded into a tree drilling machine Monday, Nov. 30. After the tree goes through the machine, it is easier to place it on a stand. 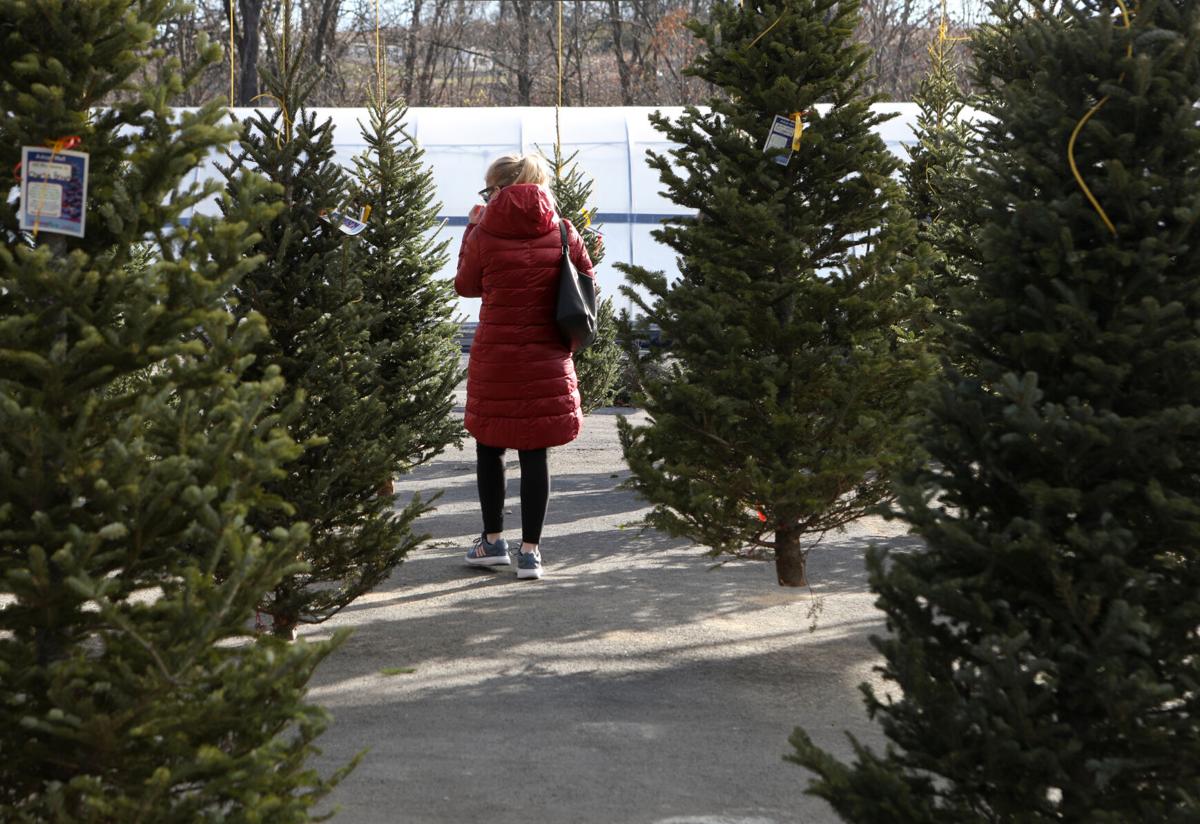 A woman searches for a Christmas tree at Hillermann Nursery & Florist in Washington Monday, Nov. 30. The trees were hung from the greenhouse ceiling so that customers could see all sides of the trees and so the branches would not get flattened.

Marty Aide, a plant buyer at Hillermann Nursery & Florist, holds a tree steady as it's loaded into a tree drilling machine Monday, Nov. 30. After the tree goes through the machine, it is easier to place it on a stand.

A woman searches for a Christmas tree at Hillermann Nursery & Florist in Washington Monday, Nov. 30. The trees were hung from the greenhouse ceiling so that customers could see all sides of the trees and so the branches would not get flattened.

If a white pine tree fell in Pea Ridge Forest, chances are someone would be around to hear it.

At local tree farms like Pea Ridge, plant nurseries and garden centers, Christmas tree purchases have been higher than at the start of winters prior. Pair this with an unusually sparse growing season, and ’tis the high season: the holiday trees are selling fast.

Compared to the same time last year, Christmas tree sales are up about 20 percent at Pea Ridge Forest, said Mary Rood, who owned the farm from 1972 to 2017 before passing ownership to her two sons.

Over at the Iron Spike Model Train Museum in its temporary setup, the Optimist Club and Washington High School FFA’s annual Christmas tree lot only has 68 of its original 220 trees left. It has only been open five days. For context, in 2019 it took 10 days for them to sell 195 trees.

“This year’s sales went really fast,” said Gary Winzenburger, chairperson of the Optimist Club’s Christmas Tree Committee. “We will probably sell out, maybe not this weekend but the next weekend.”

Back to the Roots

People are buying more and buying fast, but as a Christmas killjoy, the conundrum — a shortage of in-demand trees — begins with the 2008 financial crisis.

“When you plant a tree, it normally takes eight to 10 years to get big enough for trees to be tall enough to cut into them,” Winzenburger said. “But there was a surplus, people didn’t sell in the 2008, 2009 economy, so they couldn’t cut them.”

When less trees were chopped, there wasn’t enough soil space to plant new seedlings, he said.

Fast-forward a decade: “We’re just coming out of the shortage period where people stopped growing so many during the recession, and it’s been hard to get trees in the last years,” said Marty Aide, plant buyer for Hillermann Nursery. “Even this year was not very easy.”

Many stores don’t grow their own Christmas trees, so, much like their customers, they must buy them too. This act proves difficult. It’s a “guesstimate,” Aide said.

“There’s not much profit on Christmas, even on ornaments and everything else, not much of a profit, so if you don’t sell it, you’re stuck eating a lot of money,” he said. “So, it’s risky. You don’t want to order too much.”

Orders take place early. When the pandemic struck, it made this guesstimate tough to streamline.

“We were ordering last February, and we weren’t even sure if we would be open,” said Rood, whose company received 250 trees from Michigan in addition to the 2,000 trees homegrown and ready to be sold this year. “We were being conservative.”

This year, Hillermann Nursery purchased about 160 trees from Wisconsin, Aide said. This is a reduction from 2019, when it bought 180 and sold 150 of them.

According to the Associated Press, 75 to 80 percent of Americans who have a Christmas tree now have an artificial one, and the $1 billion market for fake trees has been growing by about 4 percent a year — despite them being reusable.

No one tracks nationwide annual sales of real trees because independent tree lots are so scattered, but those in the business estimate as many as 20 million trees or more are sold each year, most of them at big box stores.

Branching Out When Staying Home

Many people who have put up an artificial tree last year plan to buy a real tree this year, and most are citing the pandemic as the reason, according to research conducted by the Christmas Tree Promotion Board, a nationwide advocacy group for Christmas tree growers and sellers.

“I know in COVID, people are staying home more, and maybe they are looking for old-time traditions, of happier days,” Hillermann McDonald said.

She said people are “cocooning” this year, or staying home for the holidays more than they have in the past. Less travel could change their purchasing habits.

“Instead of going somewhere for Christmas, going to your mom’s or your grandma’s house, you’re having Thanksgiving and Christmas at your house,” Aide said. “The only down part we’ve seen is some of the people that would buy the bigger trees aren’t buying them this year because they’re not having their big Christmas party where their 50 friends are coming over.”

General plant sales — which encompass the holiday trees in this case — have skyrocketed this year because people are diverting the money they would typically spend on trips toward redecorating, Aide said.

He added that instead of Christmas trees, he expects a shortage of plants to follow in the next year or so.

The possible locations for people to buy Christmas trees also have changed this year following the onset of the pandemic.

“We were following the recommendations of the doctors, who were saying we shouldn’t have large gatherings,” Spaunhorst said. “We sold a lot of trees in the first three days of being open, and we didn’t know how we could accommodate keeping people safe.”

Amid all these pandemic changes, the acts of picking out and decorating a tree are still commemorative and celebratory, Winzenburger said. Simultaneously, it allows for safe social distancing practices.

“People come in, and there’s joy looking for the right tree,” he said. “We don’t have a lot of people around, it’s more of an experience than a retail service.”

Lastly, commemorative or not, a painfully cold day is not as inviting for an outdoors escapade than when the weather is welcoming. This year’s sunny and relatively warm November helped shape early sales, Hillermann McDonald said.

“We’re up 20 percent right now, but it all depends,” Rood said. “You get a snow day or an ice day, and you don’t sell anything.”

As December begins, Christmas season is here, and the trees are ripe for the picking — and Aide said it’s in good spirits to choose mindfully.

“A tree might be five bucks cheaper at Lowe’s,” he said, “but it would be nice to support small businesses anyway.”