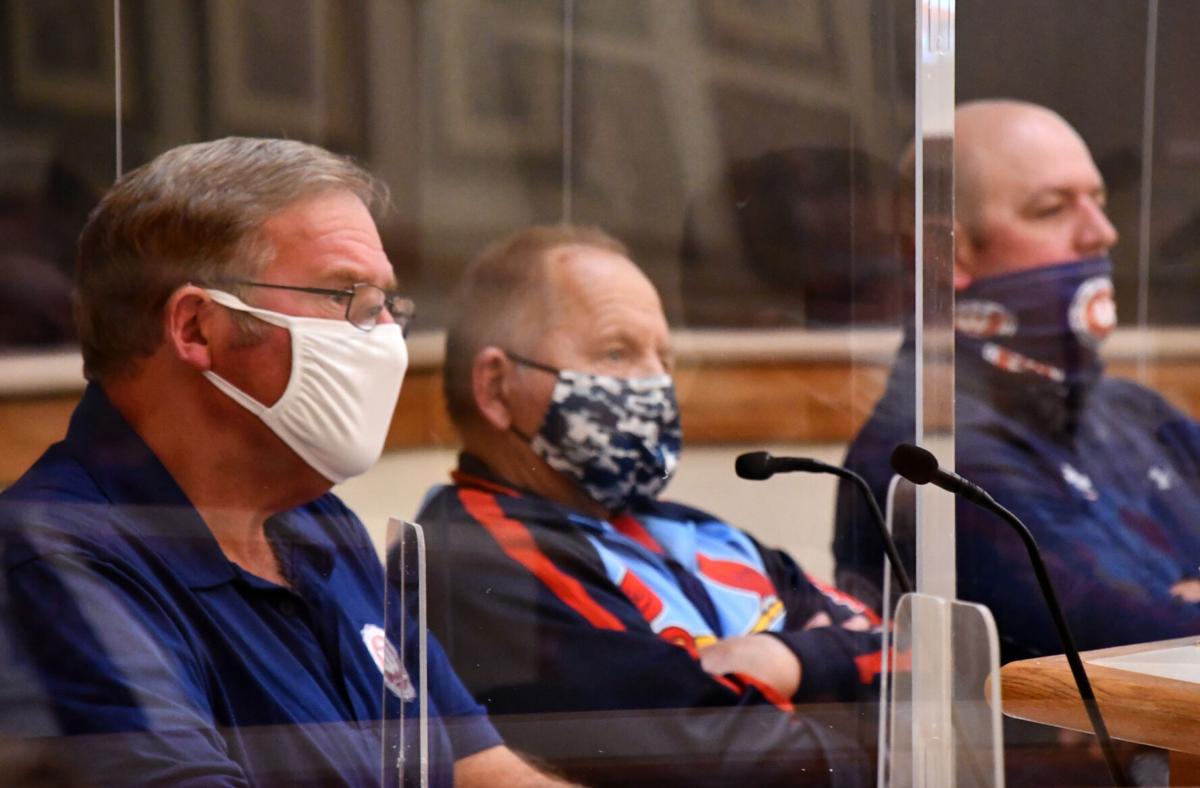 From left, Washington city council members Joe Holtmeier, Greg Skornia and Jeff Patke sit behind plexi-glass while at the city council meeting Monday, Nov. 16. The council discussed the possibility of implementing a mask mandate among other issues. 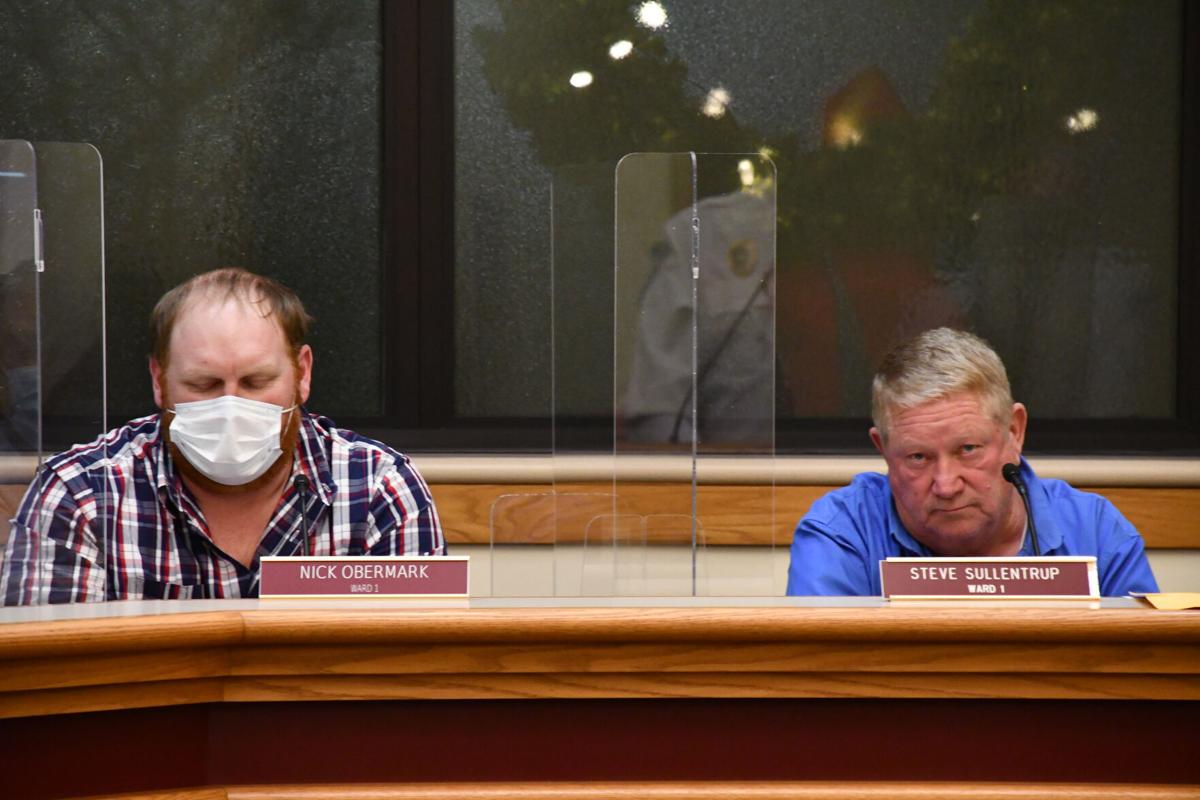 From left, Washington city council members Joe Holtmeier, Greg Skornia and Jeff Patke sit behind plexi-glass while at the city council meeting Monday, Nov. 16. The council discussed the possibility of implementing a mask mandate among other issues.

A proposed citywide mask mandate will be the focus of a specially convened meeting of the Washington City Council Monday, Nov. 23.*

The start time for the meeting, which will be held in the Washington City Hall council chambers, has not been announced. Notices about the meeting will be posted on the city’s website.

This will be the second time in three months that a proposed mask mandate will be brought before the city’s governing body for discussion and possible adoption.

The first proposed mask mandate was defeated in August after the council voted 4-4 and Mayor Sandy Lucy cast the deciding “nay” vote.

“I would like to bring up a mask mandate again because of what is going on in the city and (because) the amount of cases we are having are unbelievable,” Holtmeier said. “Seems like the county wants to educate and it’s not working. It’s time to step up and do a mask mandate.”

Tuesday’s report included 89 active COVID-19 infections in long-term care facilities, including nursing homes, in the county. There are also a total of 35 people hospitalized with COVID-19-related illnesses at Mercy Hospital Washington and Missouri Baptist Hospital in Sullivan.

At Monday night’s meeting, City Administrator Darren Lamb suggested using a mask requirement ordinance approved by the Columbia City Council as an example for Washington. Lamb suggested city leaders consider using the same metric system for the mask requirement that the city uses for city rental facilities and mass gatherings on city property, which has resulted in the facilities not being available for rent in all but one week since it was implemented.

Per Lamb’s suggestion, the city would look at three metrics. The first metric is the total number of cases for the last 14 days per 100,000 residents. The second metric would be the number of deaths reported in the 14-day window, while the third is number of hospitalizations over the past 14 days.

Those metrics would be evaluated every three to four weeks to determine if a mask mandate is still necessary, according to Lamb and Mark Skornia, the city’s emergency management director.

“There is no doubt it is getting worse,” Skornia said, adding that in the last month 16 deaths due to COVID-19 had been reported by the Franklin County Health Department.

“There is no one in the community who is untouched. Business, offices and everyone is being affected by illness, quarantines and unfortunately, death,” Skornia said.

Lucy asked Skornia if there was value in holding a special meeting this month rather than waiting until the city council’s December meeting.

Skornia said, he and Lamb spoke with Eric Eoloff, president of Mercy Hospital Washington, on Monday to discuss the issue and felt that urgent action was needed.

“The pandemic task force has been crunching numbers (since) last Friday (and) they have been rising,” Skornia said. “They had another meeting and drew more data ... and what could happen in delaying ... one week is a difference of 1,600 admissions in St. Louis area hospitals.”

He said a special meeting would be a step in the “correct direction.”

Patke questioned the proposed mandate, asking, “is a mask mandate the best way to go at the odds?”

He then referenced Illinois counties, which have used mask mandates as a way to curb the spread of the COVID-19 virus. He said public health officials there are now being confronted with a similar spike in cases as Franklin County.

“My thing is if we do a mask mandate -— is that it’s a false sense of security,” Patke said, adding the pandemic is not going to go away.

Skornia said the 14-day positivity rate should be the focus, not the total number of cases.

“We have tried the education and we tried the resolution. None of these things are working, and the numbers keep climbing,” Skornia said. “There is no room for surge.”

He said Mercy Hospital Washington as of Monday was full, with the intensive care unit at 95 percent occupancy.

Eoloff told The Missourian as of Tuesday, the hospital’s ICU was operating at 123 percent capacity.

Holtmeier said he received a text from an emergency room physician at Mercy Hospital Washington, who stated there was a heart attack patient who had to go to the cardiac catheterization lab. “After that, they had no ICU (bed) for this person, and they had to go to a regular room and hope for the best. They are that desperate,” Holtmeier said.

Sullentrup on Monday reiterated his opposition to a mask mandate, saying it is “wrong” to require people to wear masks. “I am one of them, and I will stay away from somebody who is wearing a mask,” Sullentrup said. “If they don’t feel safe, stay away from people or don’t go out.”

He said he did not believe people would wear masks and questioned how it would be enforced.

Washington Police Chief Ed Menefee said the ordinance being discussed would be “geared toward businesses,” and it would fall on them to enforce patrons to wear masks.

“If they do not do that and someone complains, we go to the business and cite them,” Menefee said, adding if a patron refused to wear a mask and refused to leave a business they would be cited.

He said the department would expect a “rush” in calls at first, which is normal when something is first implemented, and the department has enough officers to handle additional volume depending on their personal situation with COVID-19.

“I have two (officers) out because of COVID and one in quarantine,” Menefee said. “That’s why we need masks. It’s affecting our department.”

Obermark, who originally voted against the mandate, said something to consider when discussing a mask mandate is whether businesses are willing to enforce mask wearing if it means avoiding another shutdown.

“If we start (a mask mandate) do we think other communities will follow us?” Patke asked Skornia, adding he feared the hospital will be in the same situation if no one else follows.

“Past history has shown Washington to be a city of leaders, and I would ask you to do it again and others may follow,” Skornia said.

Skornia told The Missourian after the meeting, “I think it’s definitely time (to consider a mandate) with the number and spread (the) in community. No one can dispute the spread. This is the means to try and control the spread and get a little normalcy.”

*Tuesday, Nov. 17 Update: This story has been updated to include additional comments from members of the Washington City Council and other leaders.*