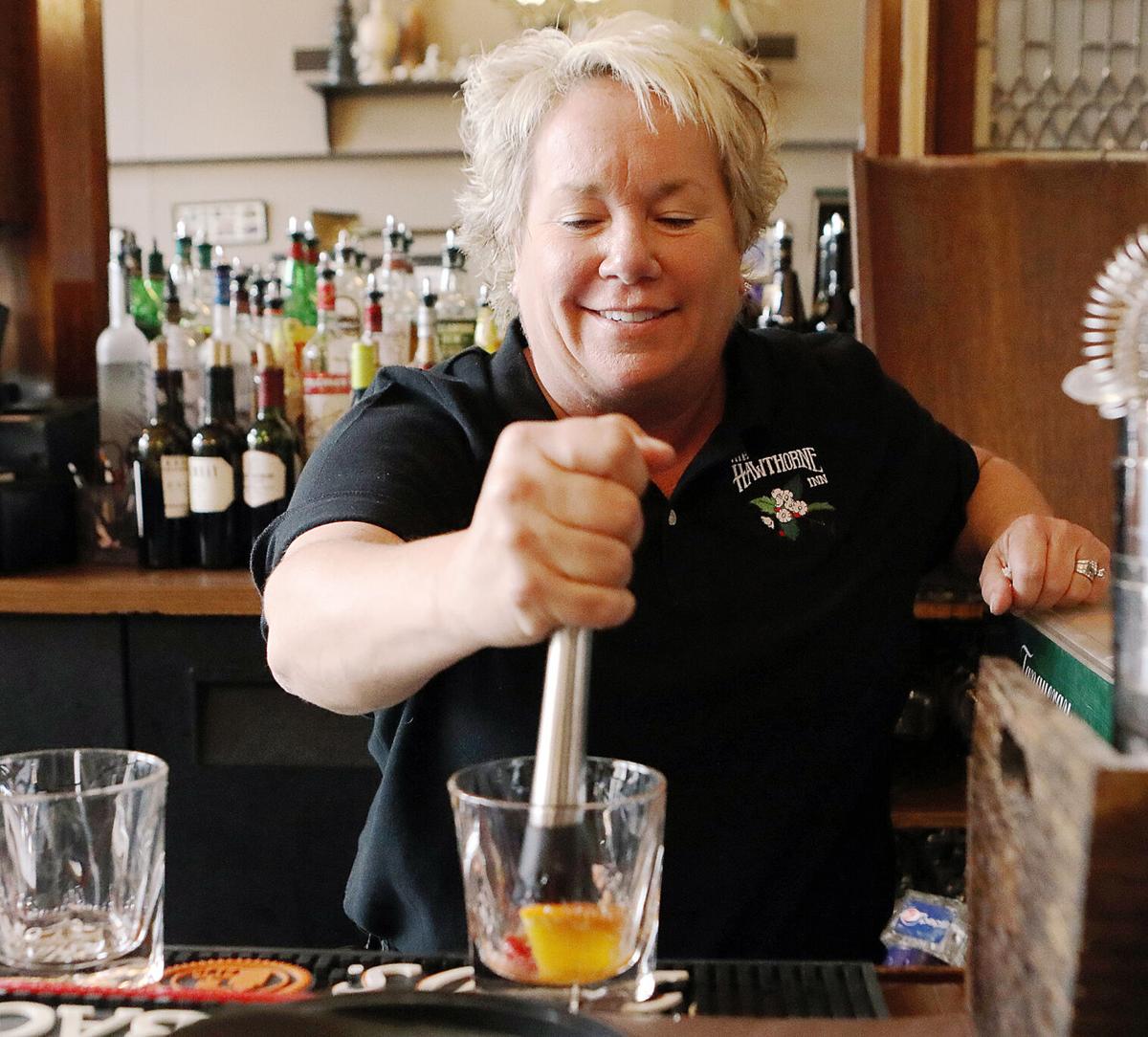 Jennifer Beatty muddles fruit while making a drink for a customer at The Hawthorne Inn March 25 in Labadie. 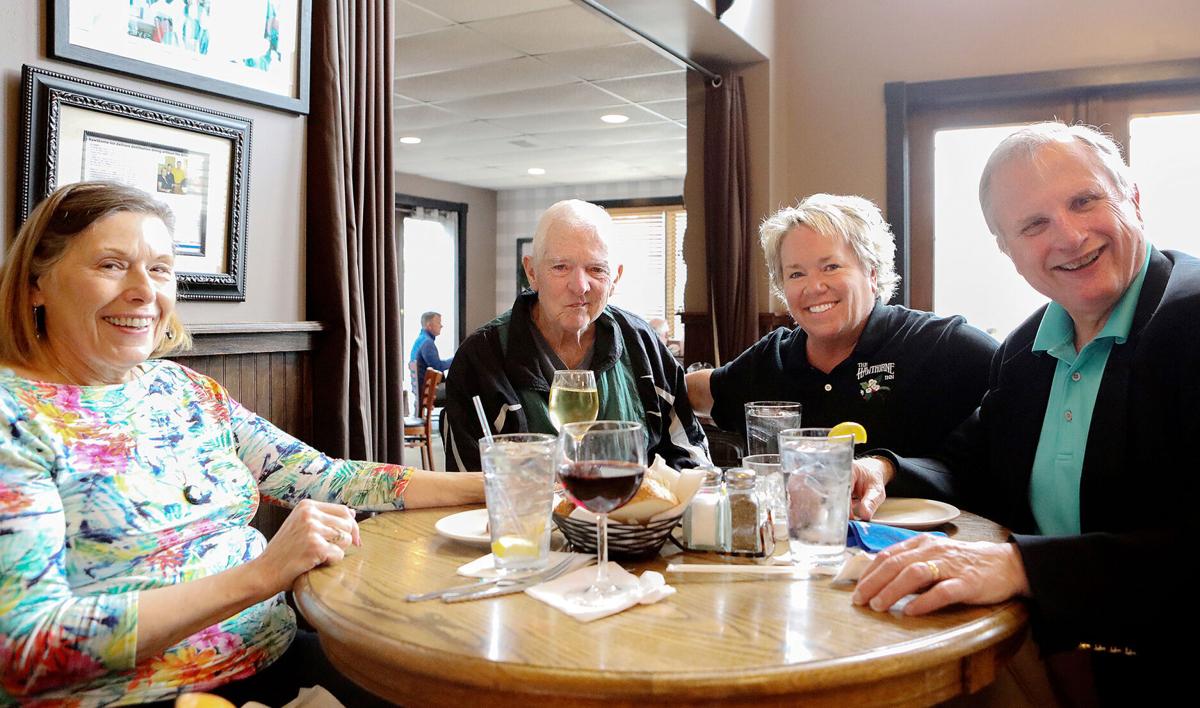 Jean and John Hauser, left, and Rev. Bill Zastrow, right, pose with Jennifer Beatty during their lunch at The Hawthorne Inn in Labadie March 25. "We come here because it's the best," Zastrow said of the trio, who eats lunch at the resaurant every day. "This is extended family for us," John Hauser added. "They know us and we know them." 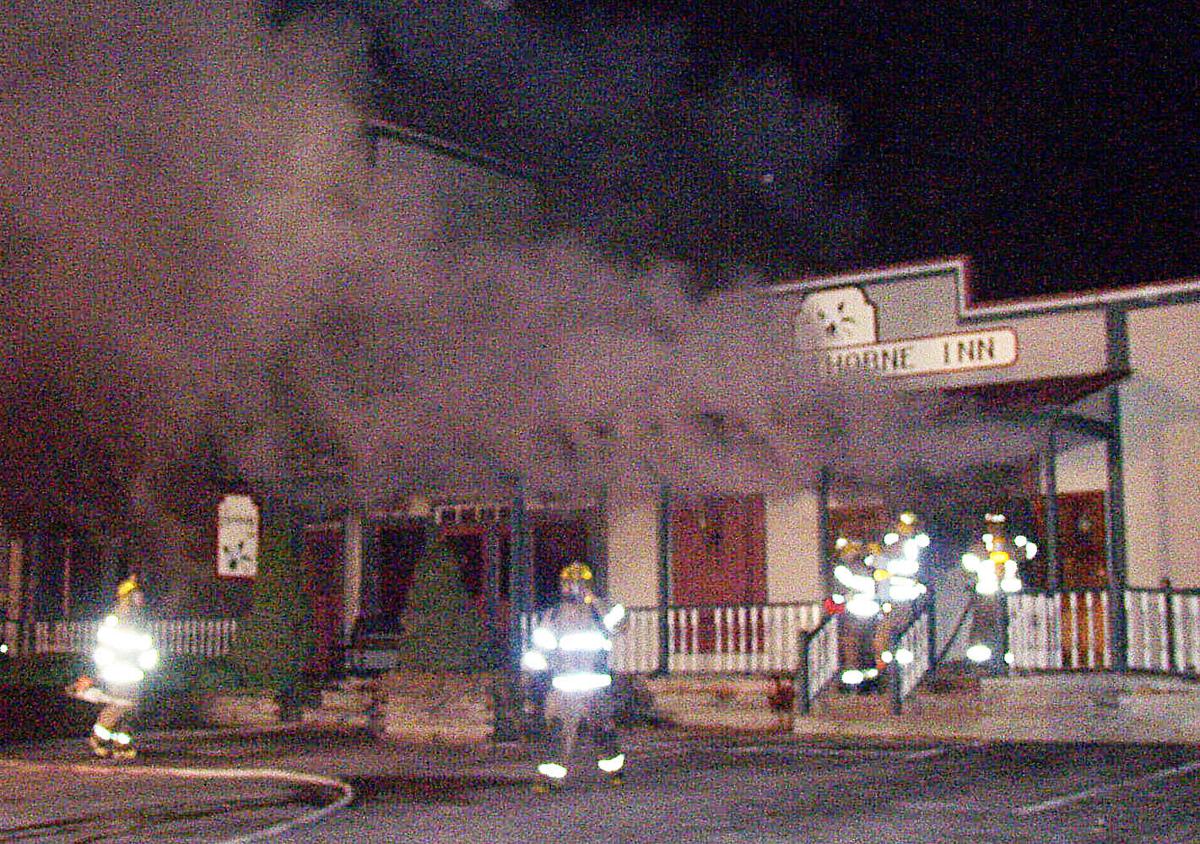 In this Missourian file photo, firefighters rush into The Hawthorne Inn in Labadie, which caught fire in 2001. At the time the fire broke out, The Hawthorne Inn had been located in the building for just over a year. The building was built in 1916 and formerly housed the old Hunters Hollow restaurant, a boarding house and the town's post office.

The night reached freezing temperatures, yet an inferno raged. The Hawthorne Inn co-owner Cathy Hancock could do nothing but watch her restaurant and bed-and-breakfast burn.

“We got a call in the middle of the night that the building was on fire,” she said. “So we came down, and it was fully engulfed in flames by the time we got here.”

Twenty years ago, firefighters fought a fire at The Hawthorne Inn in Labadie all night long. Come morning, the building was destroyed.

She had just bought a house, a staff member had just done the same, and another was starting the building process. Although the restaurant had been open seven years, Hancock and the other co-owners — her husband, Chris, and Dick Hoey — had bought the 123 Front St. property only a year before.

“It was probably one of the worst nights of our lives,” Hancock said.

The fire began at about 1 a.m. and destroyed 70 percent of the building, though this held 90 percent of the value, according to The Missourian’s archives from 2001. Hancock said losses surpassed $1 million.

To this day, nobody knows what caused it.

Fast forward two decades, and the restaurant continues to serve its faithful clientele. The structure is new, but the food, culture and people remain.

As she marks the anniversary, Hancock can see how the disaster, in hindsight, became “a blessing in disguise.”

The former two-story 1916 structure had once been a storefront and post office, so the staff had worked in a nontraditional kitchen and dining space. With the new construction, the owners could design the building for its actual purpose.

The community also gave Hancock reason to be positive immediately following the disaster, she said. Some customers lent their trailers to the owners. Others let them store surviving furniture in their barns.

The staff, too, remained faithful.

“For 13 months, we all decided to try and find something to do while waiting for the restaurant to be rebuilt,” server Jennifer Beatty said. “We all scattered, but everyone came back when it was ready to go again.”

“We’ve got regular customers that come in once a week that may be from South County or the Maryland Heights area, or you know, we do a lot of Wildwood and Eureka and Augusta,” Hancock said. “What started out as our regulars and our family, as just local people, have now stretched out across the St. Louis area.”

Glenn Overschmidt, Sullivan Bank’s senior vice president and Labadie and Union branch manager, said “there’s no question” that The Hawthorne Inn is impactful to the community and local economy.

“All you have to do is look out there any Friday or Saturday night and see the town is packed with cars,” he said.

In Labadie, a town of 2,500 residents, according to U.S. ZIP codes, the restaurant employs over 80 people, Hancock said.

Overschmidt couldn’t speak to the exact numbers, but he said, “From my own personal knowledge, it’s one of the largest businesses in the area.”

The owners worked with Sullivan Bank on the reconstruction, and they invested about $1 million on the new building and appliances.

Mainly because the antique furniture was destroyed, the original Hawthorne Inn’s bed-and-breakfast was discontinued after the fire, Hancock said, but the dining establishment has since expanded again.

In-house, it seats about 170 people, and it has added catering options.

“We’ve got kids that were babies, and now I’m catering their weddings,” Hancock said.

Hancock said she continues to be thankful for the community. They supported her when disaster struck, even though the restaurant was relatively new, and they have embraced the local business ever since.