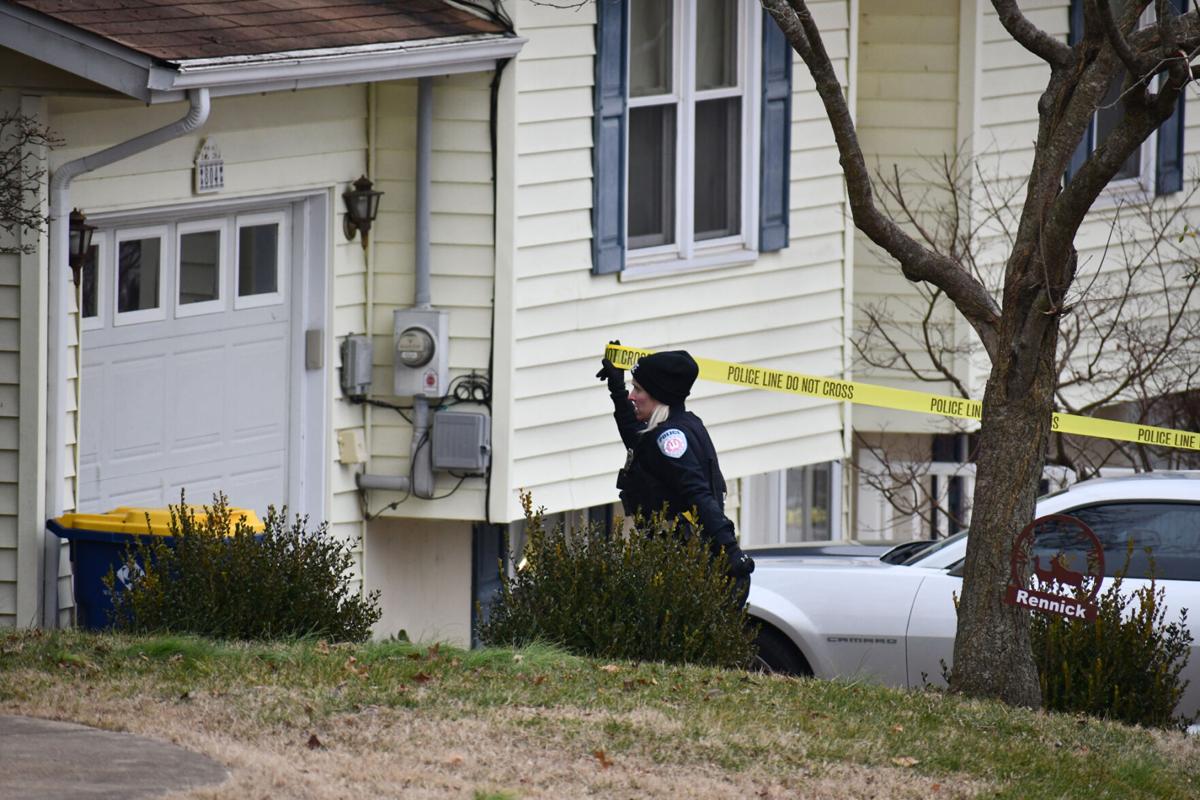 A Washington police officers puts caution tape around a home on the 800 block of Louis Street in Washington Saturday, Jan. 9. 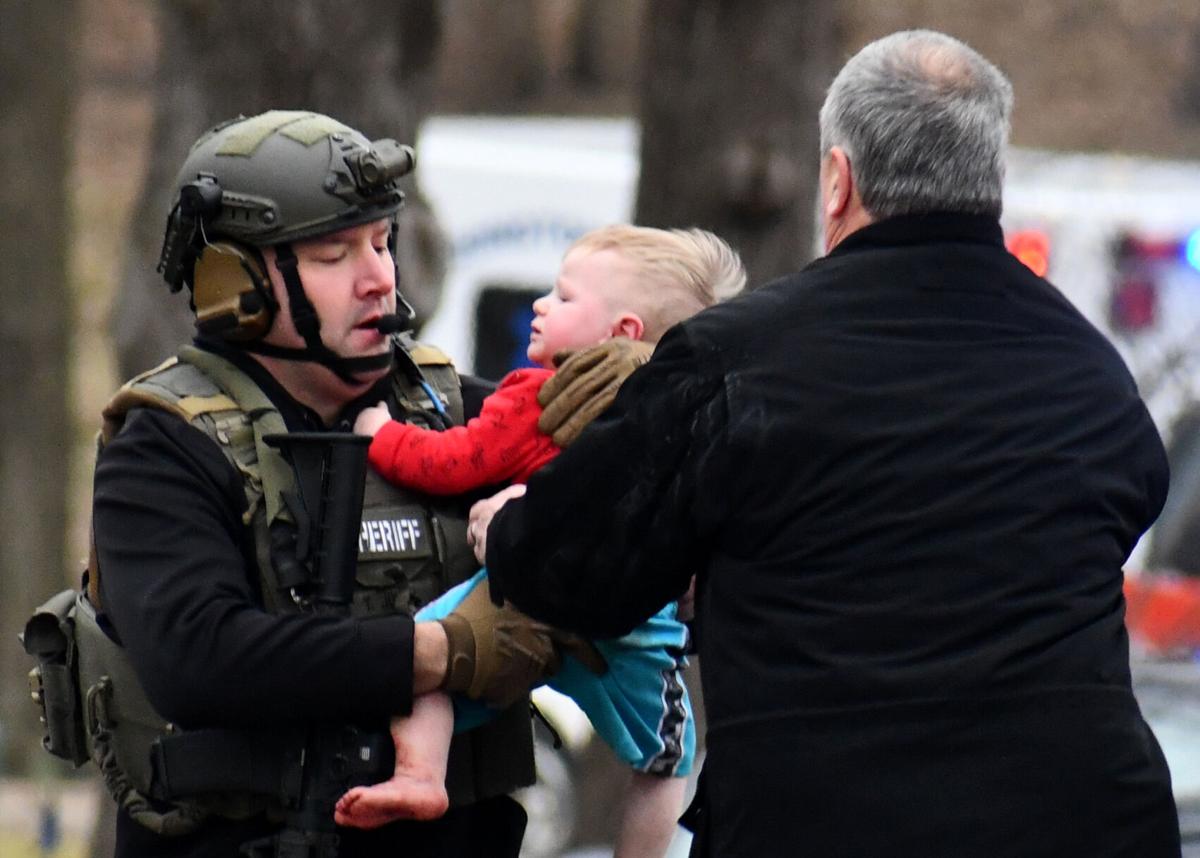 A Franklin County SWAT team member hands a child to a Washington detective Saturday, Jan. 9. Officers were called to the scene after a body was reported in a driveway on the 800 block of Louis Street Saturday morning.

A Washington police officers puts caution tape around a home on the 800 block of Louis Street in Washington Saturday, Jan. 9.

A Franklin County SWAT team member hands a child to a Washington detective Saturday, Jan. 9. Officers were called to the scene after a body was reported in a driveway on the 800 block of Louis Street Saturday morning.

Carey Boyster and Danny Peroutka had been in an on-again off-again relationship for a “couple of years,” which Boyster’s brother described as “toxic.”

Their relationship ended tragically Saturday, Jan. 9, when Washington police were called to the 800 block of Louis Street in Washington and discovered the two deceased.

Boyster, 36, was found bloodied and collapsed in a neighbor’s driveway. Peroutka, 32, was found in his home nearby.

Detective Sgt. Steve Sitzes said law enforcement followed a trail of blood from Boyster to the rear of Peroutka’s home. He said the Franklin County SWAT team was then called to clear the residence as a precaution. Police evacuated nearby homes.

The SWAT team entered the home just before 9:30 a.m. Inside they found Peroutka and the couple’s 1-year-old child, who was unharmed.

The child was taken into protective custody at the scene, Sitzes said. As of Monday, officials said the child was in the care of family members.

Sitzes said in a press release Monday department officials believe the deaths were the result of a domestic incident and no other persons appear to be involved. Boyster did not live at Peroutka’s residence.

Boyster and Peroutka had a history with area law enforcement, according to Sitzes, who said the department had responded to multiple domestic incidents in the area where the two were involved in the last year.

“Our department is investigating this as a domestic incident that occurred between Peroutka and Boyster and no other person(s) have been found to be involved,” Sitzes said in a press release Monday.

Family members said Boyster leaves behind three children, including Chelsea and Chase from a previous marriage and her youngest, Cameron. They said she struggled with mental health issues but still managed to put others first.

Boyster took care “of everyone,” said her brother, Tim Boyster, including their mother, sister and her three children.

“Carey would give you her last dollar,” said Amanda Boyster, Tim Boyster’s wife and Carey Boyster’s sister-in-law. “She always took care of everybody else, even if that meant not taking care of herself. She very much struggled with mental  health for a long time, but she still did everything she could for everybody else.”

Tim and Amanda Boyster said the legacy they hope Carey Boyster leaves behind is greater than the incident that resulted in her death.

“She was super artistic and she has paintings around the house to prove it,” Tim Boyster said. “She has always been into music, deep into music. She cared about everybody more than she cared about herself.”

Zach Boyster remembered his sister for her love of music and her incredible vocal range. “She loved her family by her own terms and she was never afraid to tell you what was on her mind,” he said.

Tim Boyster described his sister as wanting to be a “rock” for others to lean on.

She had purchased a home in Washington, which she shared with her mother, sister and three children, according to Tim Boyster. The home was a gathering place for everyone, he said.

“For those who didn’t have parents or siblings, who didn’t have a job or a place to eat, everyone was stopping by there,” he said. “My mom cooked for everyone and my sister paid for it, that’s the way it was.”

Tim Boyster said his sister’s passion for creating a communal space for others to call home came from her experience growing up in a broken home and witnessing her children growing up in one as well.

Carey Boyster worked in a factory, according to Tim Boyster, who said he believed she had been laid off in March of 2020 as a result of the COVID-19 pandemic.

“She was just one to put in a lot of hours; she wasn’t afraid to work hard,” Tim Boyster said, adding that since his sister had been laid off, she had enrolled in college courses at East Central College to become a nurse and was working on her prerequisites.

“I want her to be remembered as the artistic soul she was, the hard worker that she was and the amount she cared for everybody else,” Tim Boyster said.

In the wake of Boyster’s death, a family friend, Nika Ponder, started a GoFundMe Sunday, Jan. 10, for the Boyster family. The goal for the fundraiser is $5,000 and as of press time Tuesday, $5,791 has been raised. Donations can be made by visiting gofundme.com.

Funeral arrangements for Boyster were pending as of press time. Mahn Funeral Home, which has locations in Festus and De Soto, is in charge of arrangements.

Peroutka is survived by his wife, Kelsey Peroutka; his two sons, Kayden and Cameron; and his mother, Missie Johnston, of Wright City. He is also survived by two sisters and two brothers. Oltmann Funeral Home in Washington is in charge of arrangements, which are private and will be held at a later date.

Attempts by The Missourian to reach his family were unsuccessful as of press deadline.

The investigation into the deaths of two Washington residents who died Saturday morning is ongoing, according to Washington Police Detective S…