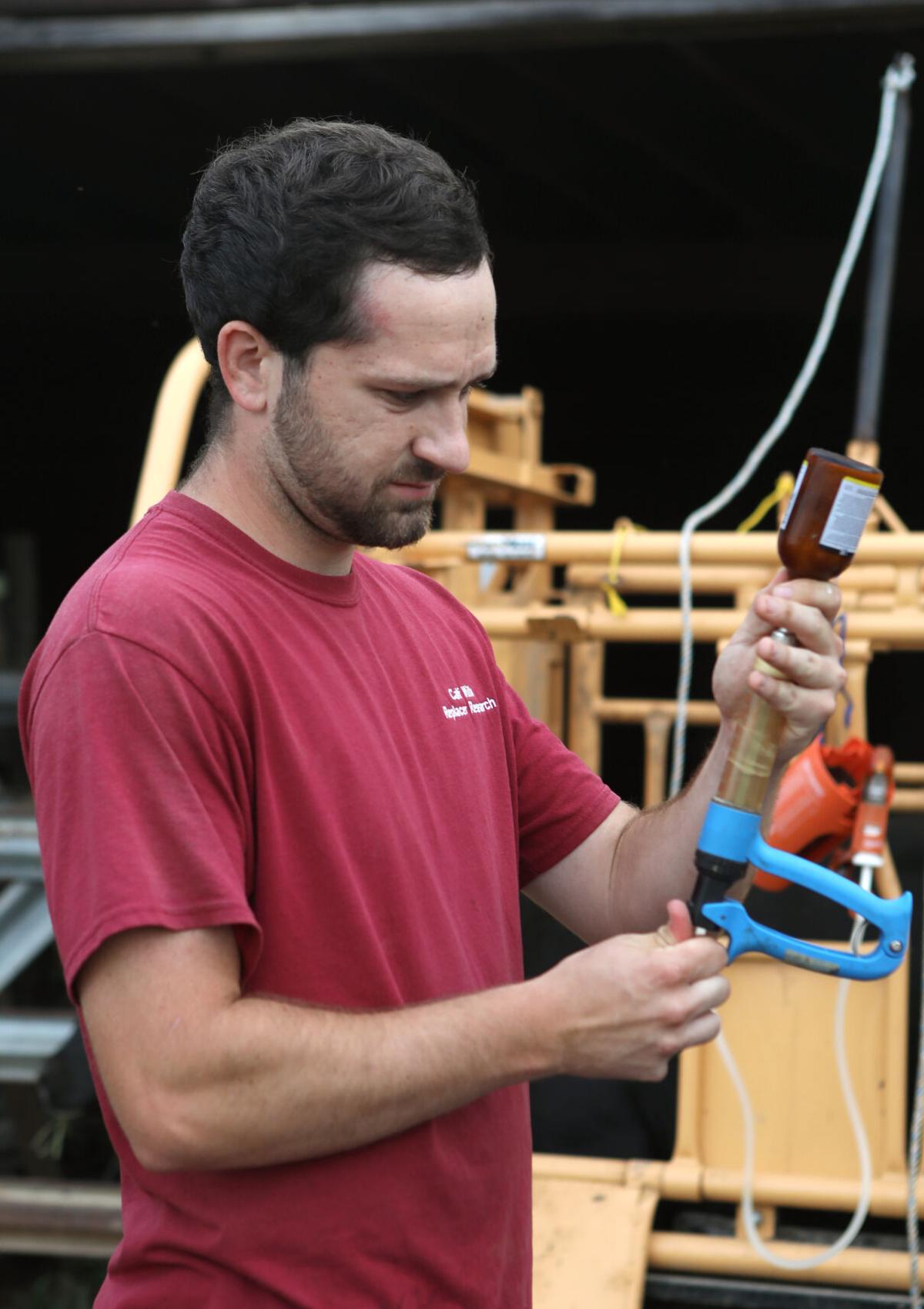 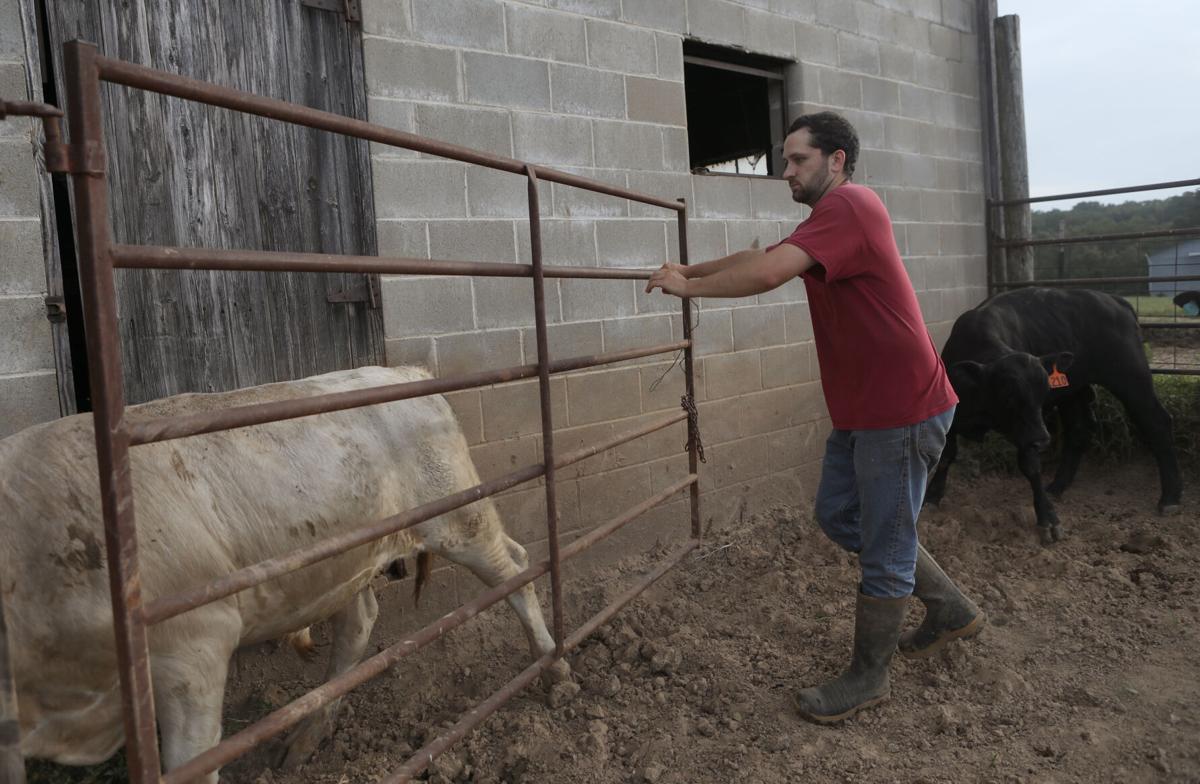 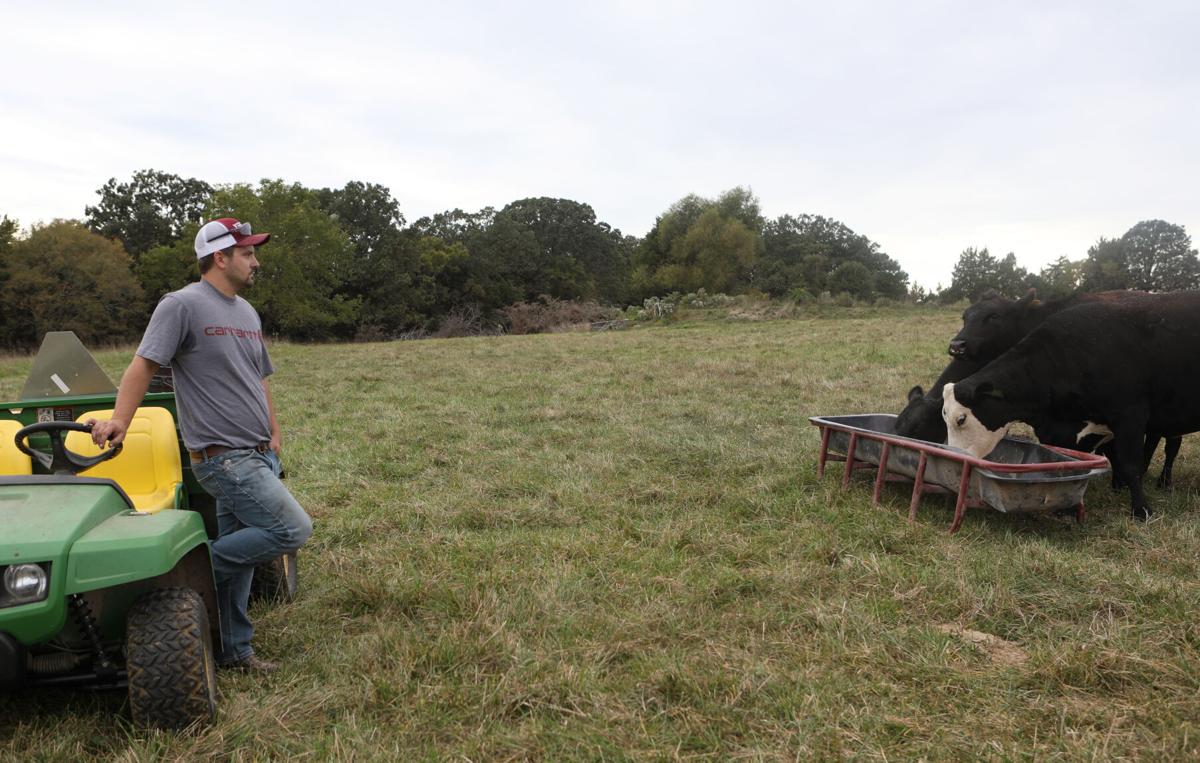 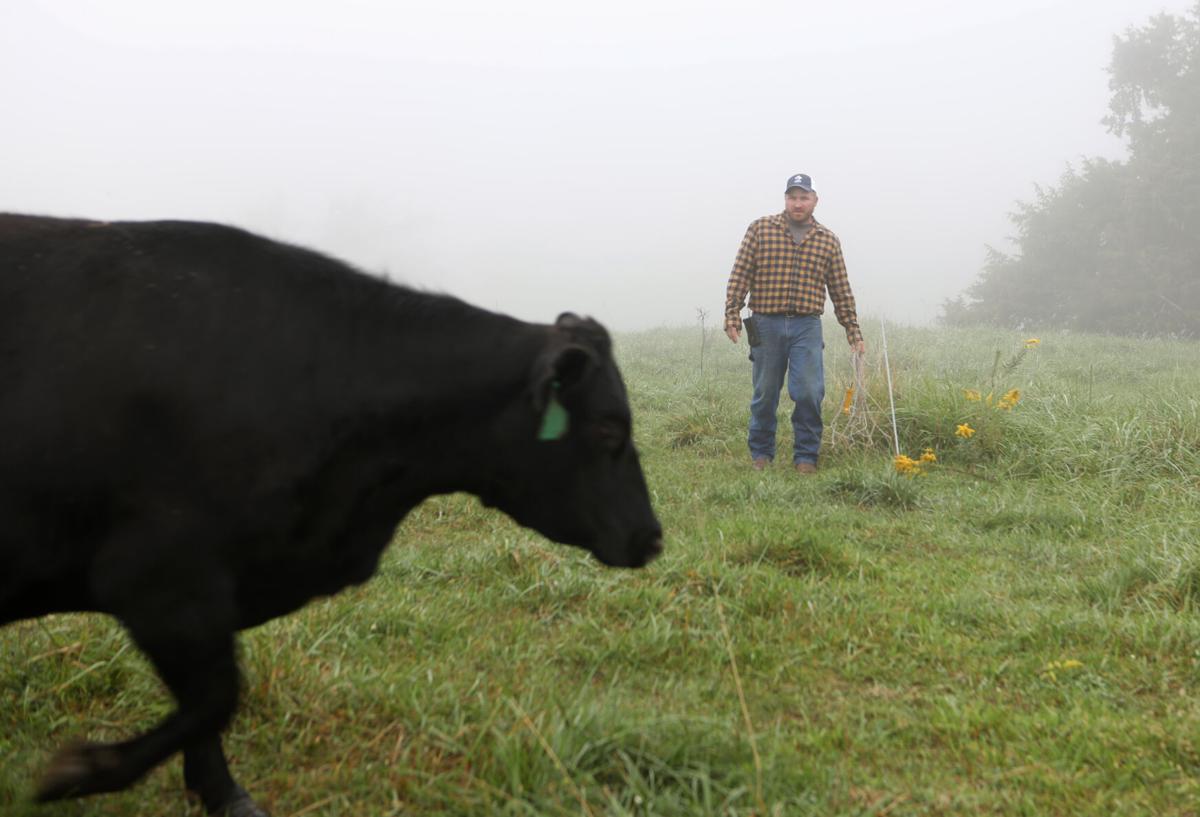 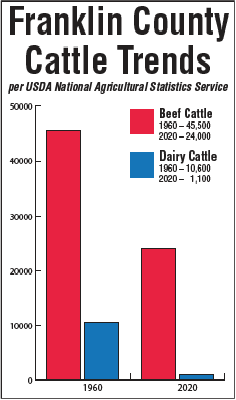 As soon as Ben Schroer’s hands could reach the steering wheel of a tractor, he could be found driving around his family farm near Marthasville with his dad. Schroer, 31, is a sixth-generation farmer who lives in a 100-year-old faded white two-story house on 175 acres filled with green pastures. From the front porch you can hear the faint mooing from the cattle and the crickets chirping. A person sitting in the rocking chair there can gaze out on to the fields as the crisp summer breeze blows the plaid clothes drying on the clothesline. All of which hint toward a peaceful existence, and for Schroer it’s all he ever could have asked for.

“I have always loved farming,” Schroer said. “I love the land and nature. It’s very peaceful, and it keeps me out of the city.”

Schroer, along with Justin Maupin, of Lonedell, and Luke Herring, of Union, are young farmers in the Franklin County area who are continuing the tradition of cattle farming in Missouri’s Rhineland region. They are considered a minority, given that only 20 percent of cattle farmers today are under the age of 40.

It’s the passion for the land, the cattle and the hard work that drive these young farmers in taking a chance in an industry no longer popular among their peers as most younger generations in Franklin and Warren counties have opted for other careers rather than farming or other agriculture-related work.

Cattle farming is no exception.

Franklin County farmers in 1960 raised 10,600 dairy cattle, according to the U.S. Department of Agriculture’s National Agricultural Statistics Services. That number had fallen to 1,100 dairy cattle by 2020. Similarly, the number of beef cattle raised in the county has dropped from 45,500 in 1960 to 24,000.

Kendra Graham, MU Extension field specialist, said agriculture is not a popular field for young people, with 60 percent of the cattle farmers in Missouri aged 55 years and older.

Only 42 percent of cattle farmers in Missouri list it as their primary occupation, according to Graham, who added that number is likely skewed because some cattle farmers retire from other careers and take up cattle farming as a side job.

But despite all that, Schroer, Maupin and Herring have chosen to go into the field and make a living off it. Each has approached his entrance into the industry differently, but all agree there is nothing else they would rather be doing.

Schroer said he knew farming was something he always wanted to do.

After graduating from Warrenton High School, he stepped into the family business and started farming full-time.

Schroer purchased his 175 acres and home from his father who farmed the property for 40 years. Schroer’s parents live on the “home farm” adjacent to his property.

He currently works with his father, Charles Schroer, who is farming not only cattle but also traditional row crops of wheat, soybeans and corn.

On Schroer’s farm he breeds cows and raises them to be about 1,200 to 1,500 pounds, before they are sold to packaging plants in other states.

He said every day brings its own adventures, but it starts around 6 a.m. and often before sunrise.

“Normally I get the feeding done (for the cows) in the morning and check the heifers who are having calves,” he said in an interview with The Missourian last week. “We are also still trying to bail hay, and next week the corn should be ready for harvest.”

Most of the corn crop goes to feeding the cattle. Whatever corn is leftover, along with the wheat and soybeans, is stored to be sold later.

“I was fortunate to keep working for dad because he had all the equipment,” Schroer said. “My words of encouragement for young farmers are save up and make friends with the older farmers who are looking for help.”

A young farmer who lives on his family’s farm in Lonedell is making his entrance into the cattle industry by doing it on the side — at least for now.

Rolling up the driveway, one is welcomed by the bleating of several goats, clucking and crowing of the chickens, and the wagging tail of the family’s dog, Marge, a Great Pyrenees, who is often found at Maupin’s heels, as she run alongside him as he drives his UTV to check the cattle.

Maupin, 25, is an East Central College and Central Methodist University graduate, who earned a degree in marketing and accounting while working full time at Purina Wildlife in Gray Summit, a research mill that makes feed. He’s been working there five years.

He spends his off-time working a second full-time job, cattle and hay farming. Maupin recently purchased a plot next to his parents’ property, which he’d been renting, to call home. He is currently building his house, but his 15 heifers, of mix-breed, already call it home.

Maupin sells calves to a buyer in Bourbon when the calves are around six months old. He hopes to sell 15 per year.

Working with calves is a highlight of the job, he said. “It may make me sound like a little kid, but I like watching them play around with each other.”

Maupin also started cutting and baling hay about four years ago. Currently, he does hay on five area properties.

He said he didn’t always want to be a farmer but fell into the industry. “I bought a heifer from dad, had the opportunity to rent the property (he now owns), buy out the owner’s herd, and it grew,” he said.

Despite not anticipating this career path, Maupin said he enjoyed growing up on his parent’s 125-acre property and the opportunities it provided.

Maupin credits his parents, who also farm on the side, as being a big influence on him going into the industry.

“I lucked out that mom and dad were established in it, and I was fortunate enough to have them let me use their stuff to get going and keep me going,” Maupin said. “If you’re coming up from nothing it would be extremely tough.”

Maupin said one day he hopes to cattle farm full-time, but it’ll take some time before he will get there. “I would have to grow a lot more.”

The Herring Farm located outside of Union is where Herring, 22, moved with his parents in the second grade.

The farm-styled home’s wrap-around porch is where the family’s orange-colored cat, Bob, can be found sleeping on one of the chairs and the gentle loowing of a two-month old angus calf, known as 41, can be heard as the calf roams the yard.

The property, which now homes 50 cows, was not always destined to be a cattle farm, and Herring said he has turned it into “probably more than what his parent’s bargained for.”

“The first few years we did not have anything. It was just open fields and then dad did what they call stocker calves (400- to 500-pound calves) then grew them up a little bit and sold them,” Herring said. “He did that for five or six years and then he did heifers, and at the end of that my sister (Ellen) and I convinced him to keep a few back to breed them. Both of us got to keep one back and that’s how it got started.”

Growing up, Herring was told farmers make no money but realized he could make a living out of it. “I like the fact that I am my own boss, and the cattle are fun to work with and be around,” he said.

Herring earned a bachelor’s degree in agriculture systems management with a minor in economics from University of Missouri-Columbia. He cattle farmed throughout college and started full-time after he graduated last December.

Herring currently sells background cattle, which is anything under 500 pounds, and prepares them to be sold and taken to a feed lot. He currently buys and sells out of sell barns but one day hopes that can change.

“What I would like to do is sell straight to feed-lot buyers and local grocery stores,” he said.

The long-term goal, Herring said is to own his own property. “Right now, in Franklin County you cannot touch a piece a land for a price that makes sense,” he said, adding his parents are helping him now, splitting cost and revenue with him.

With each grain of feed and every tender piece of freshly cut hay, with each calf born and heifer sold, these three men are continuing a tradition of cattle farming that otherwise may be lost to the region that was once home to dozens of dairy farmers who raised sizable herds of brown-and-white Holstein dairy cattle.

“I was always told that farmers make no money,” Herring said. “But then a light bulb kind of went off that I could buy a few calves and be doing something I love. And today I am making a living out of it.”