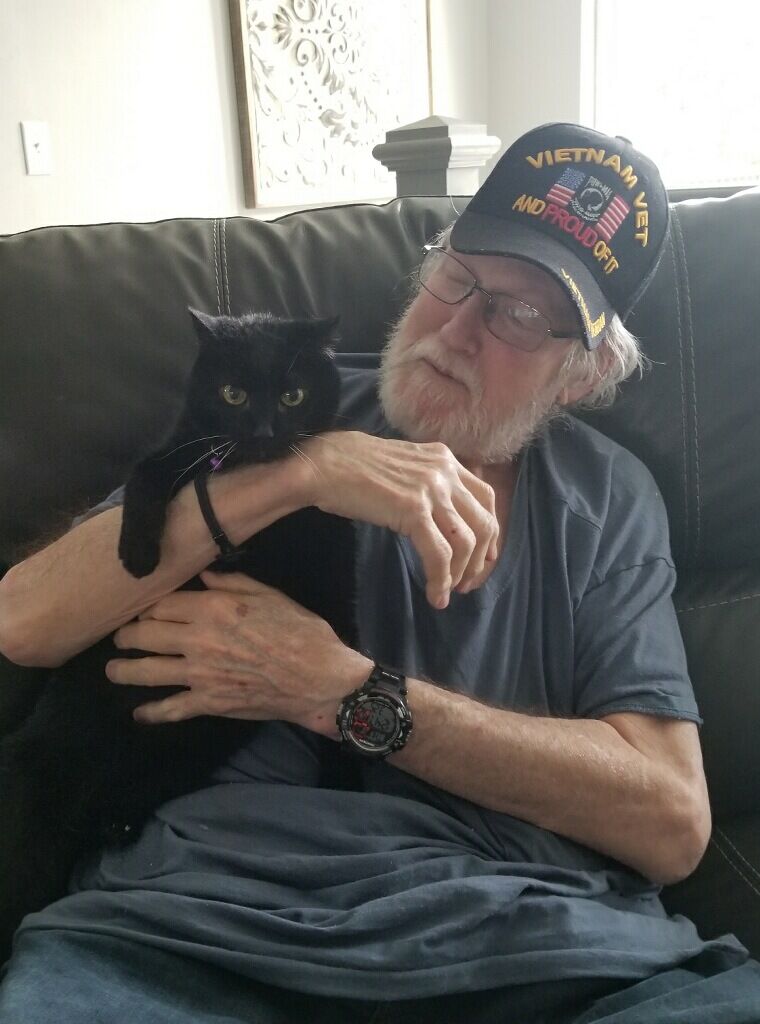 Brighde and her “new lap,” Kenneth Shaffar. Following her two cats’ deaths in a house fire in 2017, Susie Lewis had been looking for a cat who would snuggle with her 76-year-old father, Shaffar. 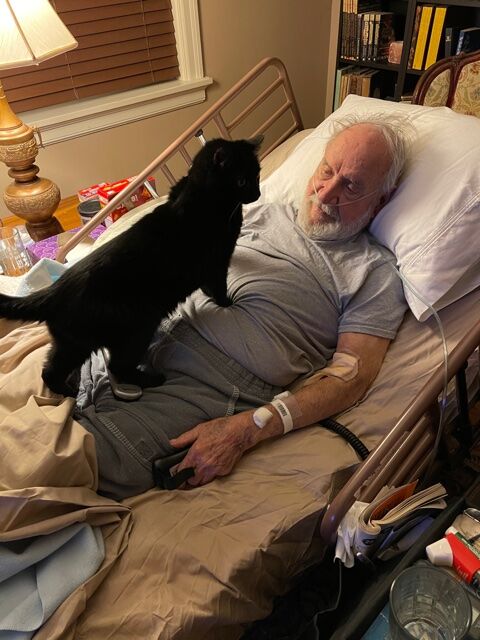 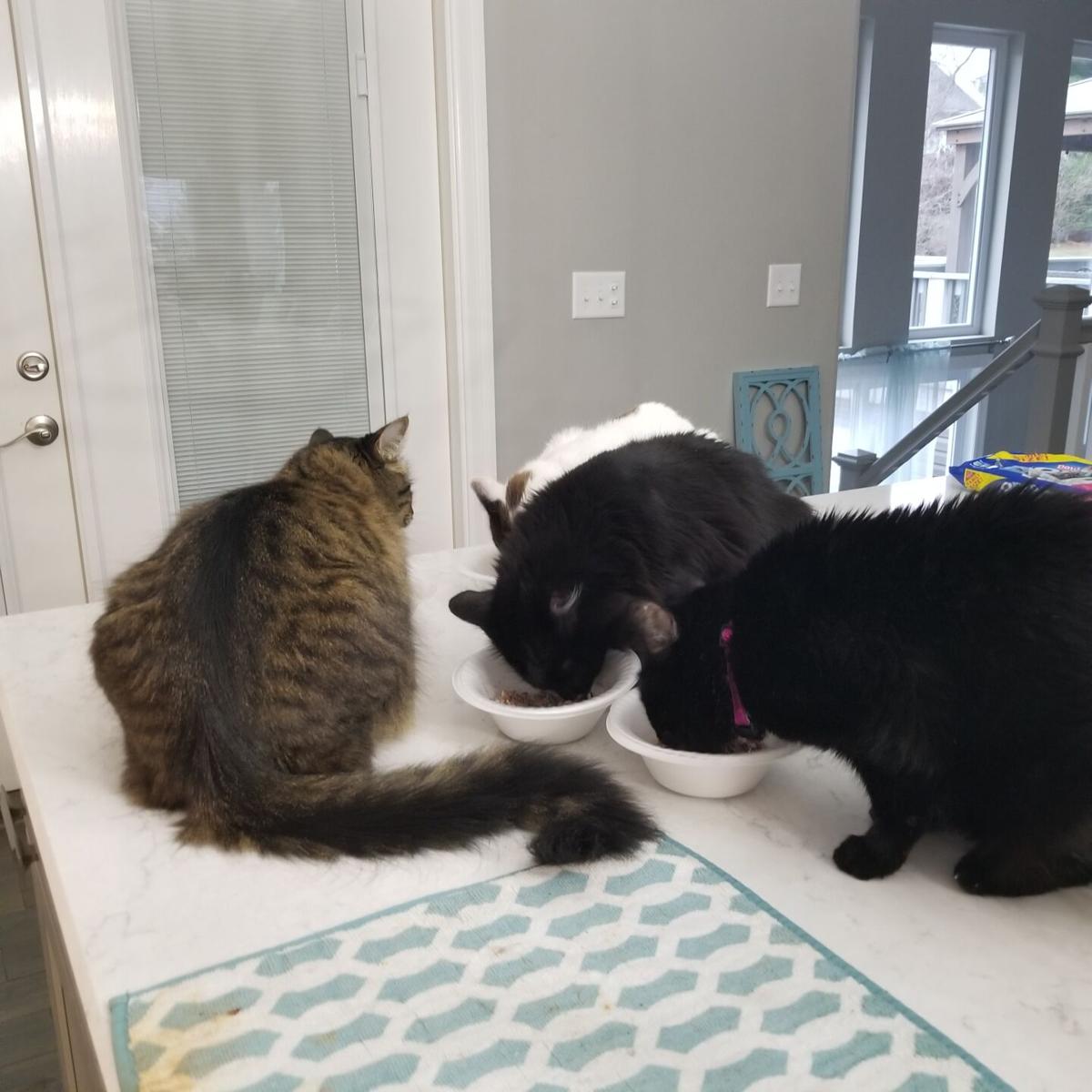 Susie Lewis said Brighde is the most friendly of the family’s now four cats and follows her everywhere. When Lewis isn’t home, Brighde can be found on her dad’s lap, Lewis said. 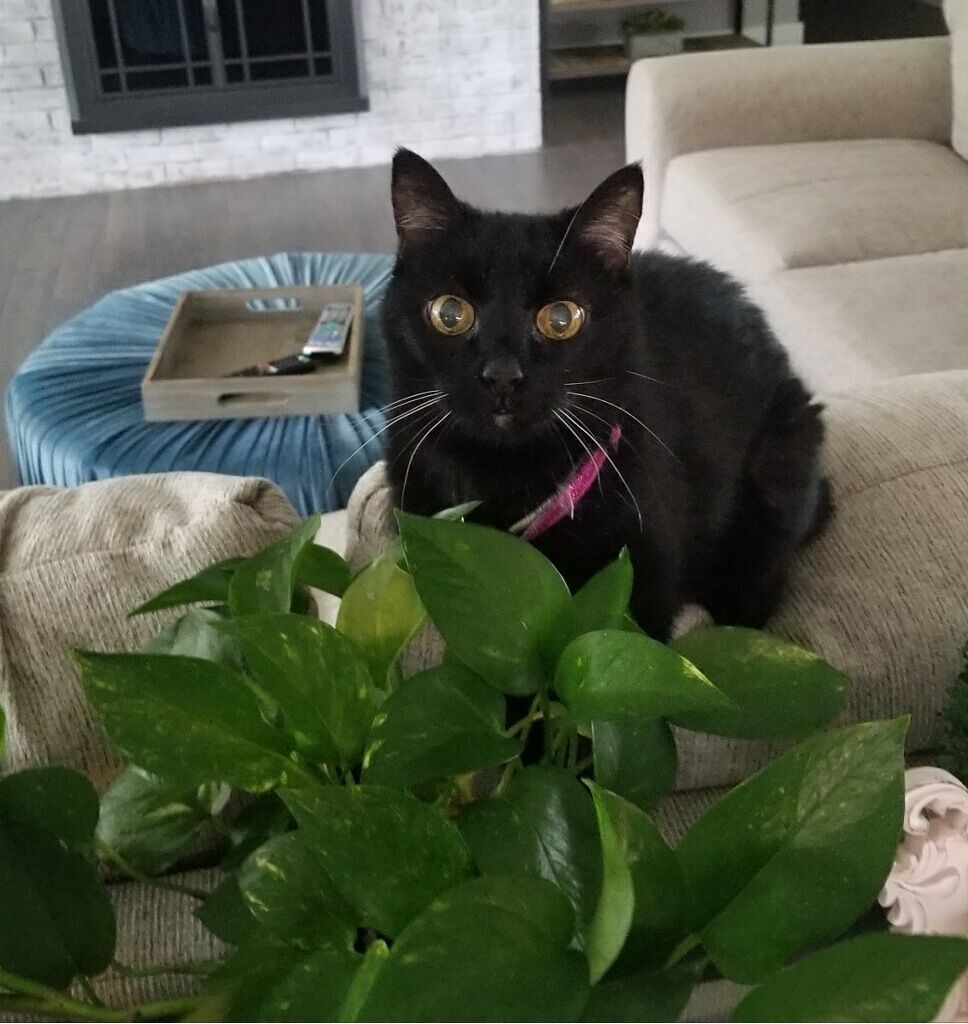 Susie Lewis still sends photos of Brighde to Kristen Wiseheart, the daughter of the cat’s previous owner. Wiseheart, who lives in Texas, has said giving the cat away was “extremely difficult” but that it gives her “peace to know she will be very loved and well cared for.” 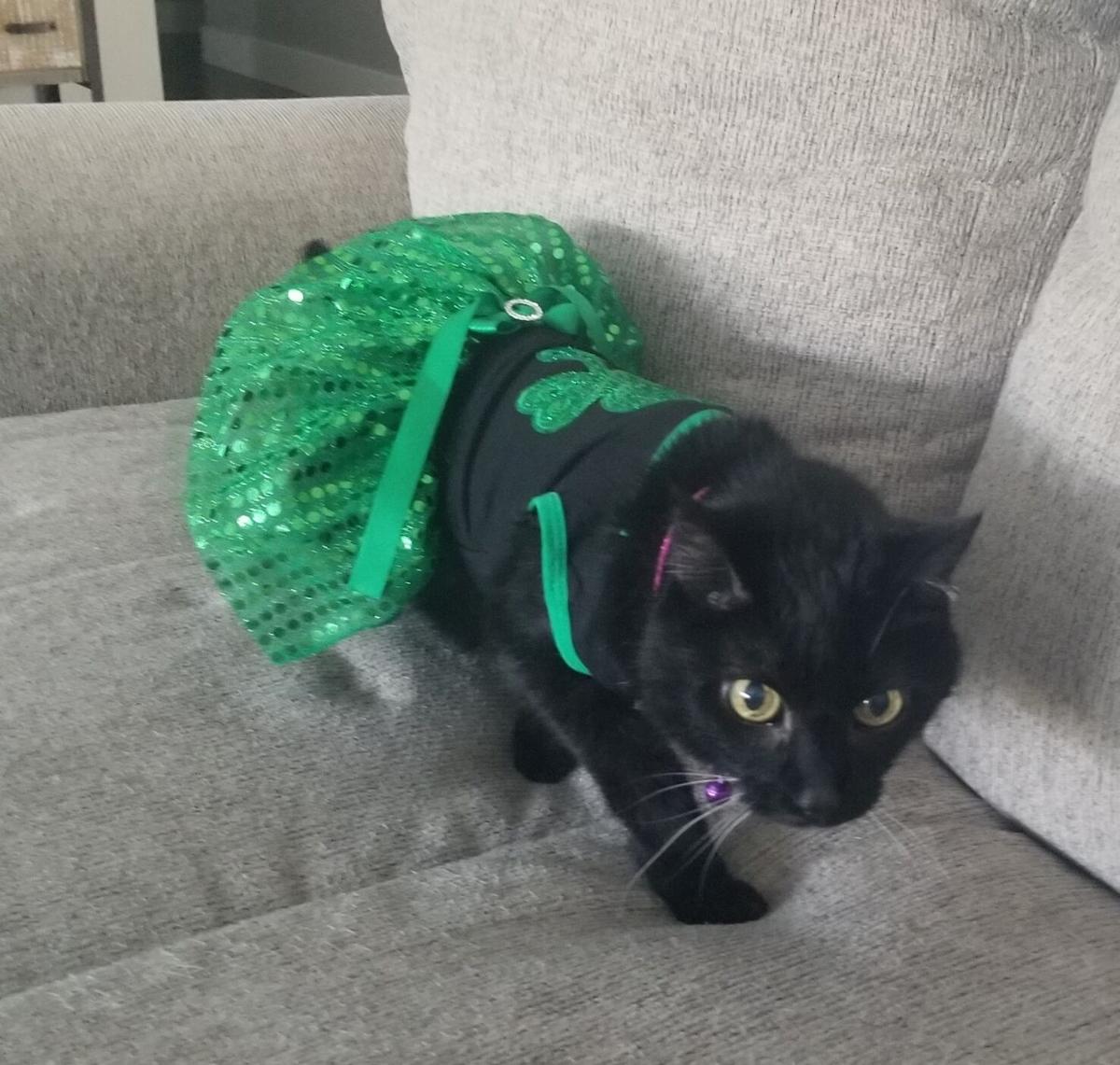 Brighde and her “new lap,” Kenneth Shaffar. Following her two cats’ deaths in a house fire in 2017, Susie Lewis had been looking for a cat who would snuggle with her 76-year-old father, Shaffar.

Susie Lewis said Brighde is the most friendly of the family’s now four cats and follows her everywhere. When Lewis isn’t home, Brighde can be found on her dad’s lap, Lewis said.

Susie Lewis still sends photos of Brighde to Kristen Wiseheart, the daughter of the cat’s previous owner. Wiseheart, who lives in Texas, has said giving the cat away was “extremely difficult” but that it gives her “peace to know she will be very loved and well cared for.”

Susie Lewis loves playing dress-up with her newest cat, Brighde. The cat has almost never left Lewis’ side since the animal moved into Lewis’ home in St. Charles County about a month ago. When she’s not meowing at Lewis’ feet, she’s often stretched out on the lap of Lewis’ 76-year-old father, Kenneth Shaffar.

For Brighde, having a lap to sit on is a familiar part of life. She was previously owned by Washington resident George Wiseheart, a patient at Mercy Hospice. Through a program called Pet Peace of Mind, Mercy staff found a home for Brighde following Wiseheart’s passing.

“A lot of hospice patients like to have their loose ends tied up, and they want to know (their pets) are going to go to a loving home,” said Nancy Preheim, manager of post acute services who leads the program. “One of the top reasons pets are taken to shelters is because their owner has died. So this helps the families and patients out and also the shelters and the pets themselves.”

An Oregon-based nonprofit started the program and expanded it to almost 200 hospices across the U.S. It was picked up by the Mercy Health System in fall of 2018, and since then Preheim has helped rehome 36 dogs and 16 cats from 31 patients across the St. Louis metro area. In one of her early successes, the patient’s neighbor had promised to care for the patient’s two cats, Sammy and Nimrod, but the neighbor already had two and couldn’t handle a third and fourth.

“She reached out to me and said, ‘You’ve got to find a good home because I promised her I would take care of these cats,’ ” Preheim said. “I posted something on Facebook, and a woman reached out to me and said, ‘I’ve always had a calling to help hospice patients,’ but some people aren’t comfortable being with someone who’s dying but still want to help. So my son and I got two carriers and took the cats to their new owner. She still sends me videos of them.”

Preheim said before the program, the task of rehoming pets fell either to grieving families or social workers, or the pets went to the shelter. In one instance before the program started, a neighbor of a patient told hospice staff about a horse living in a barn on the patient’s property.

“We ended up calling the Humane Society,” Preheim said. “But that’s an example of why we need this program. Had we known there was a horse in the back when (the patient) was admitted, we could have taken care of it from the beginning.”

With funding from Purina, Mercy Women with a Mission and individual donors, the program provides pet food, supplies and veterinary care to the pet during the transition period, again with the hope of alleviating stress on patients and their families, Preheim said. The program’s budget is about $5,000 per year with the funding.

Donors also give supplies to the program, and Preheim said one person paid for a dog trainer to come talk to hospice staff about how to manage a pet that is staying with its owner while they’re caring for them.

So far, the animals placed have been just dogs and cats, but Preheim said, “if it comes up, we will help out with anything.”

Preheim keeps in touch with many of the families who have adopted pets and said they often keep in touch with the pet’s former family. Lewis still texts photos of Brighde to Preheim and to George Wiseheart’s daughter, Kristin.

“(Brighde) is a piece of her dad that she had to let go of, so I said they can come visit any time,” Lewis said.

As part of the program, Kristin Wiseheart helped select the family Brighde would go to. She invited Lewis to her house to meet her, and Lewis told her why she hoped she and her dad could take Brighde home.

“We had a house fire in 2017, and our two cats died. It was devastating,” Lewis said. “Brighde snuggles just like my Oscar who we lost. She’s always lying on me and is so sweet. She’s constantly meowing and follows me everywhere. We absolutely have fallen in love with her.”

Lewis said Shaffar spends probably $40 per week on cat treats and toys for Brighde and the other three cats. He also has a lap dog, Willow, who Brighde will snuggle against on Shaffar’s lap.

Kristin Wiseheart said Brighde, who had been with her dad since she was a kitten, sat on her dad’s lap every day, nudged his chin to be pet and slept curled up above his head on his pillow.

“That cat lived for my dad,” Wisehart said. “It’s ironic because he never was an animal person, but my mom got two dogs and three cats and they all took to my dad.”

Wiseheart said she wanted a quiet home where Brighde could keep getting lots of attention, as she’s “more like a little dog.” Lewis remembers Kristin Wiseheart explaining how the cat mourned and often walked around looking for her dad after his passing.

“I think that makes the family feel good knowing my dad is there, so Brighde always has a lap to sit on,” Lewis said.

Kristin Wiseheart said the Lewises and Brighde, who is named for the Celtic goddess of power, are “a perfect fit.”

“I’m a firm believer that God brings people into our lives at just the right moment,” Wiseheart said. “It was extremely difficult to let her go, but it gives me peace to know she will be very loved and well cared for. I know my dad would be so happy with where Brighde is now and the continued love she is getting.”

Lewis is eagerly awaiting the arrival of Brighde’s Easter costume she ordered and is excited to send more photos of the well-loved cat to the Wisehearts.

For Preheim, the level of attention to Brighde and the friendship between Lewis and Wiseheart are proof of the program’s success.

“Pet Peace of Mind is a great way to bring awareness of hospice to the community,” Preheim said. “Hospice is there for the entire family unit. We think pets are family, so we’re going to help them, too.”

For more information about the Pet Peace of Mind program, call Mercy Home Health and Hospice at 314-729-4400.