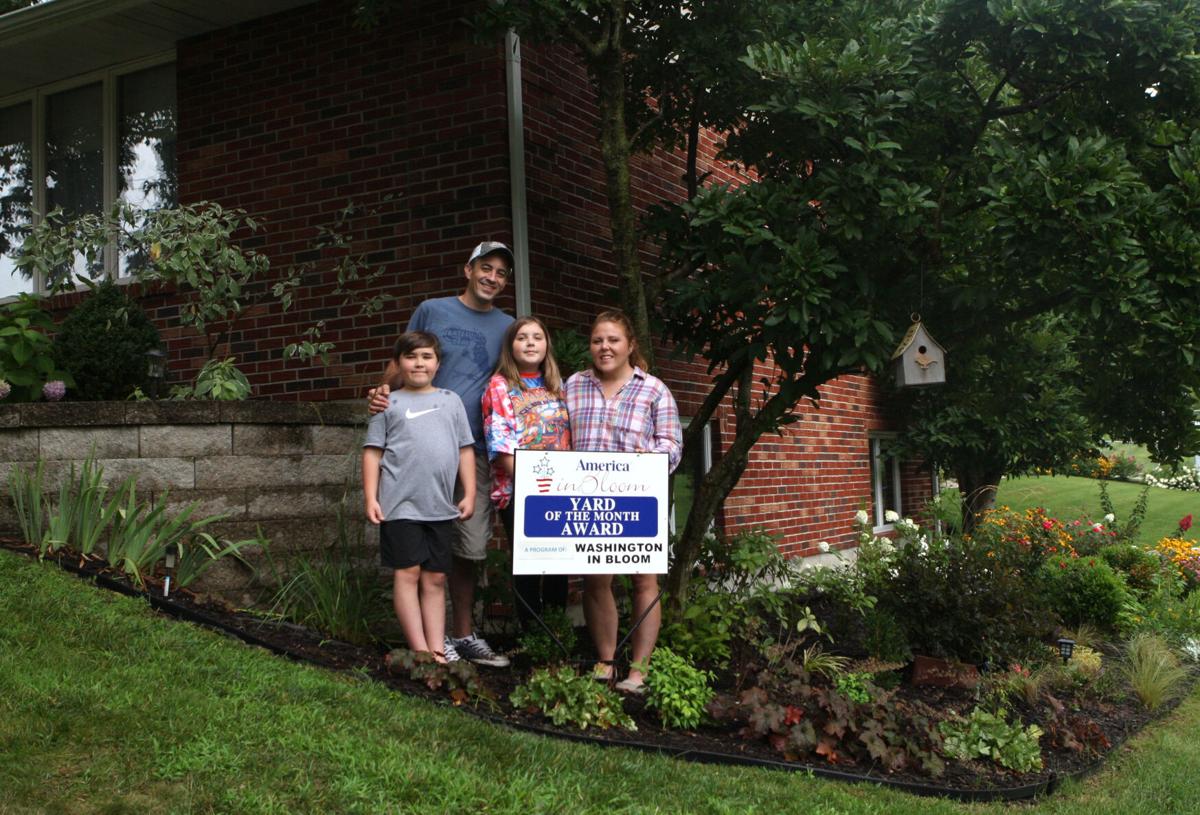 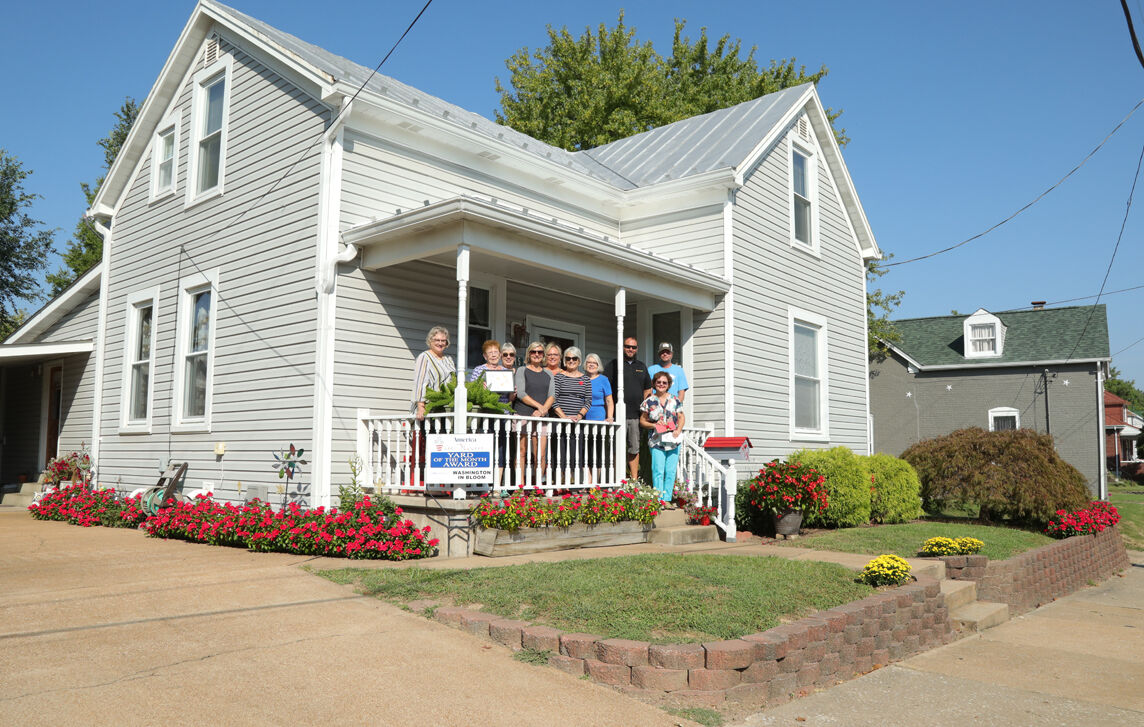 Decades later, Deaneal McAfoos has never forgotten the feeling of the dirt under her tiny fingernails. The spots of vibrant yellow amid a sea of green. Or, mostly, the kind smile of her grandmother as the two passed entire days in the warm sun, planting daffodils in her grandma’s front yard on East First Street near American Legion Post No. 218.

“It was a fun way to get away from my brothers, and it was an outlet,” McAfoos said. “And then it kicked off again (as an adult). Each yard I get is a blank slate to just create.”

McAfoos, now an adult with two young children, said the memories with her grandma have never left her. She now considers herself a “plant addict,” getting a rush from bringing plants found in clearance sections back from the near-dead. She follows in her grandma’s footsteps in her own garden each spring. A few years ago, she and her husband, Devin, moved their garden and home to a special site — her grandma’s former home. It was there that the couple won Washington’s Yard of the Month contest, put on by Washington in Bloom and several local sponsors, last July.

“I was so overwhelmed when I found out (we’d won),” McAfoos said. “I about fell over.”

The Yard of the Month contest honors homes and business each year with the brightest, most blooming and most beautiful front yards. This month, as hopefuls begin planning and planting for the upcoming springtime burst of colors, the contest is celebrating its 10th anniversary. Its first winners, Marsha and Marty Riggs, were honored in April 2011.

According to longtime coordinator Sally Bocklage, the contest was inspired by a symposium called America in Bloom in St. Louis in 2010. Sandi Hillermann McDonald, Mayor Sandy Lucy and then-Parks Director Josh Pedersen were invited, and with their attendance, Washington grew first curious and then excited to enter the city into the America in Bloom national contest for best landscaped communities, inviting judges from the program to tour Washington. The Yard of the Month contest started as a way to encourage city residents to decorate their yards ahead of the July 2011 event.

Washington didn’t win, but the local contest stuck. In its second year, the window of winners was shortened from April to October to May to September, and judges stopped awarding one home and one business each month in favor of one monthly winner.

“When someone wins, the family is so proud,” Bocklage said. “It means they’ve put a lot of heart and soul and work into their yard, so they are quite honored to be rewarded.”

The contest has grown — pun intended — with support from full sponsors Hillermann Nursery, Washington Area Chamber of Commerce, Main Street Creamery, Downtown Washington Inc., Neighborhood Reads, Orange Leaf Frozen Yogurt and Fazoli’s, as well as several partial sponsors. They offer gift cards and prizes to the winners and fund an easily recognizable sign that stands in the winners’ front yard. Since 2011, more than 50 gardeners have been honored.

Some of the contest’s first winners still remember the early excitement and honor. Kirk and Lynne Kuchem had been gardening for years at their home on Karen Lane, adjacent to where Kirk Kuchem grew up, when theirs was named Yard of the Month in July 2011. Near the shadow of the towering tree that once held his childhood treehouse, the couple had planted vista petunias in a bubblegum pink.

“We both started gardening when we were little,” Kirk Kuchem said. “My mom planted flowers, and my father was into vegetable gardening.”

“That’s what we do for fun,” Lynne Kuchem added. “We go to plant nurseries, and we plant all day, and then our reward is a margarita at Los Cabos or Ernesto’s.”

The couple still put days of work each year into their front and back yards, eager to try new plants each year. They plan their plots based mostly on color, also taking into account which areas of the yard get the most sunlight.

“We’re proud because we do everything ourselves,” Kirk Kuchem said. “That’s why some of our stuff has failed.”

Alongside the new plants each year are old favorites, which the Kuchems say provide as much memory and meaning as photographs or keepsakes. A rosebush near the back wall gifted to Lynne Kuchem by her mother before she died almost 30 years ago still produces a vibrant flower any time the Kuchem’s daughter has a special event or birthday. And Kirk Kuchem’s grandfather, who lived on Eighth Street, had a long hedge of white spireas that now bloom behind the couple’s home, still growing each year from starters taken from his grandpa’s plant.

Just as the Kechums use their garden to remember and honor connections with people, another past winner, Marian Wunderlich, has used hers to forge new ones. Wunderlich won in September 2019 for her row of impatiens in alternating colors, their vibrant oranges, reds and pinks striking against her gray house. But the same year, a tomato plant gifted to her by a friend produced more than 5,000 fruits — enough to feed her family, the neighborhood and then some.

“We were tired of picking tomatoes by the end,” Wunderlich said, laughing. “I made juice, salsa. I froze them. I cooked them down. I put them in jars. I was giving them away all over.”

Wunderlich also has been gardening since she was a child, helping her mother plant snapdragons and other flowers. When she first got married, she remembers spending evenings after dinner outside in her garden, sometimes until 10 p.m.

Over the past year, when the COVID-19 pandemic slowed supply chains and many funeral homes had trouble securing enough fresh flowers for services, Wunderlich often gave away cuts from her own plants, particularly of her fern, to be made into bouquets for the caskets. The same fern, which she still has, provided foliage for her husband’s funeral several years ago.

The fern lives in Wunderlich’s basement, but most of her flowers bloom around her house and in her spacious backyard. She also adds more to her garden every year. She was nominated anonymously for the award.

“It was a complete surprise when they called,” she said. “I was just flabbergasted and so happy.”

Applications for the season open each spring and close at the beginning of September, the last month a winner is chosen. The number of entries each time ranges from 35 to 60, and although people are eligible to enter themselves, Bocklage said people are often nominated by someone else and don’t find out until they’ve won.

“Oftentimes it’s a spouse who nominates the other, or a neighbor,” she said. “But people should not hesitate (to nominate their own yard). Be proud. Take ownership of the hard work.”

Through the years, the winners have come from almost all wards and neighborhoods of Washington. Although many winners are retirees with more time to garden, Bocklage said several have been younger couples like the McAfooses. A team of judges selects the winning yards based on neatness, design, use of color and overall impression, only including for consideration parts of the yard that can be viewed from the street.

Although the winners feel a sense of pride, in at least one instance, the winners weren’t the most excited people in the family. Deaneal McAfoos’ grandmother lives in a nursing home now and had only seen her granddaughter’s summer 2020 yard in photos when McAfoos visited her in person to deliver the news.

“She was so happy,” McAfoos said. “So overjoyed, and I told her, ‘It all started because of you planting those daffodil bulbs with me.’ ”

Entry forms for the contest can be found online at washmo.gov/home-1/city-departments/parks-and-recreation/america-washington-in-bloom or at the Parks and Recreation department office at 405 Jefferson St.