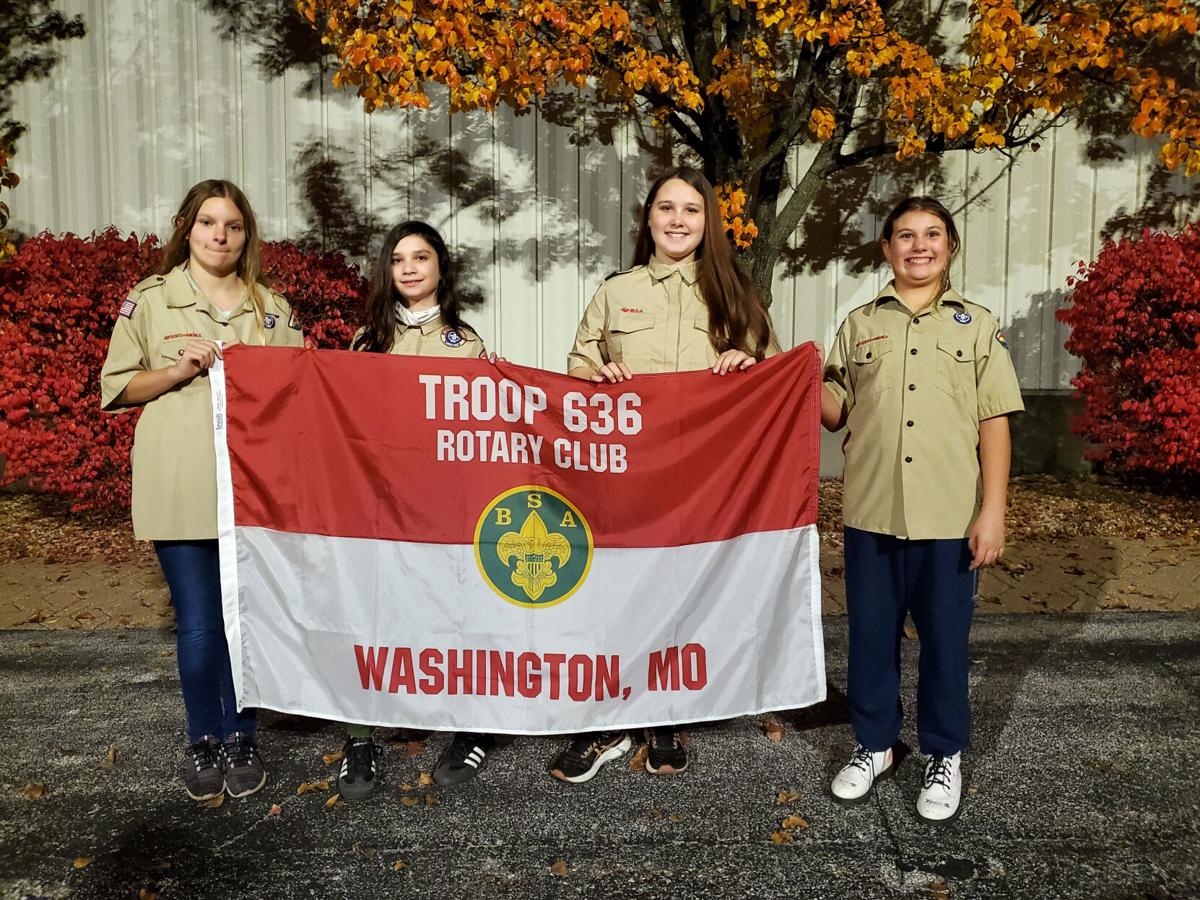 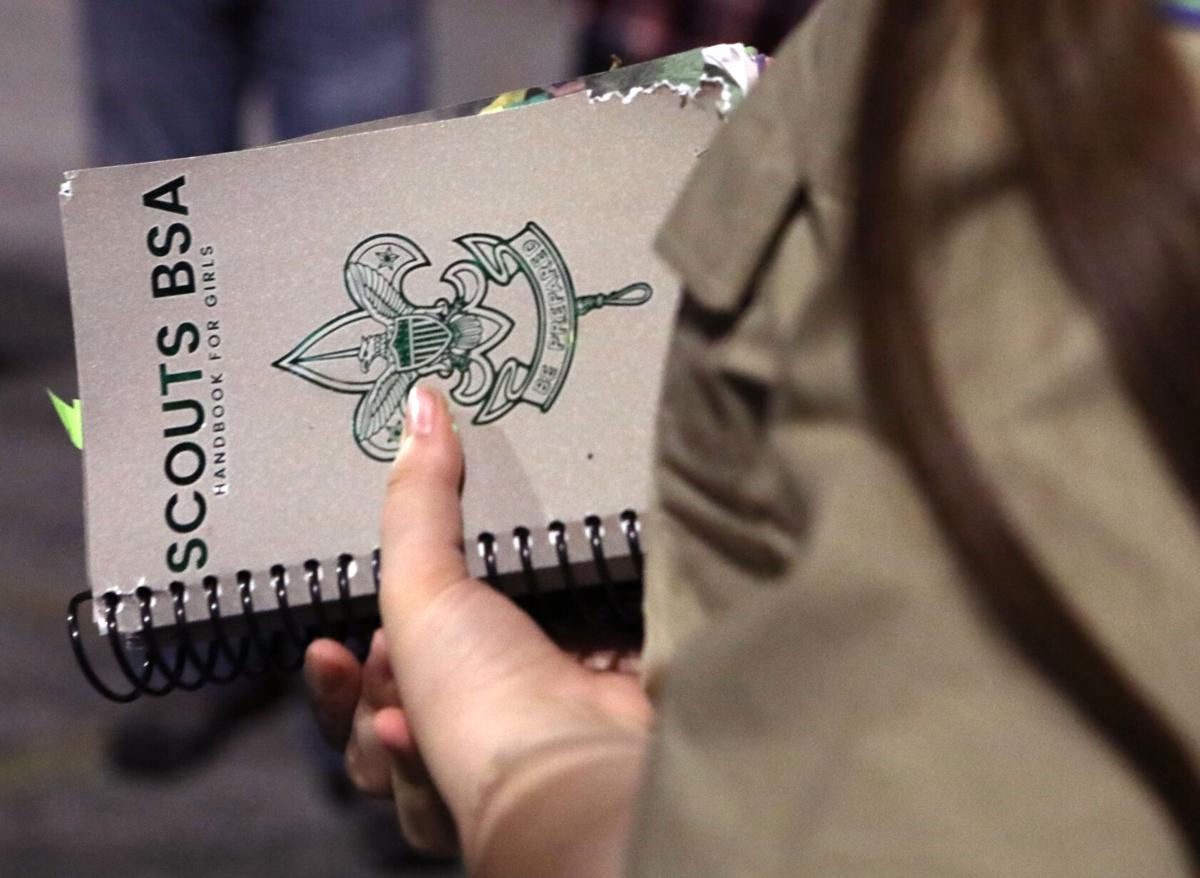 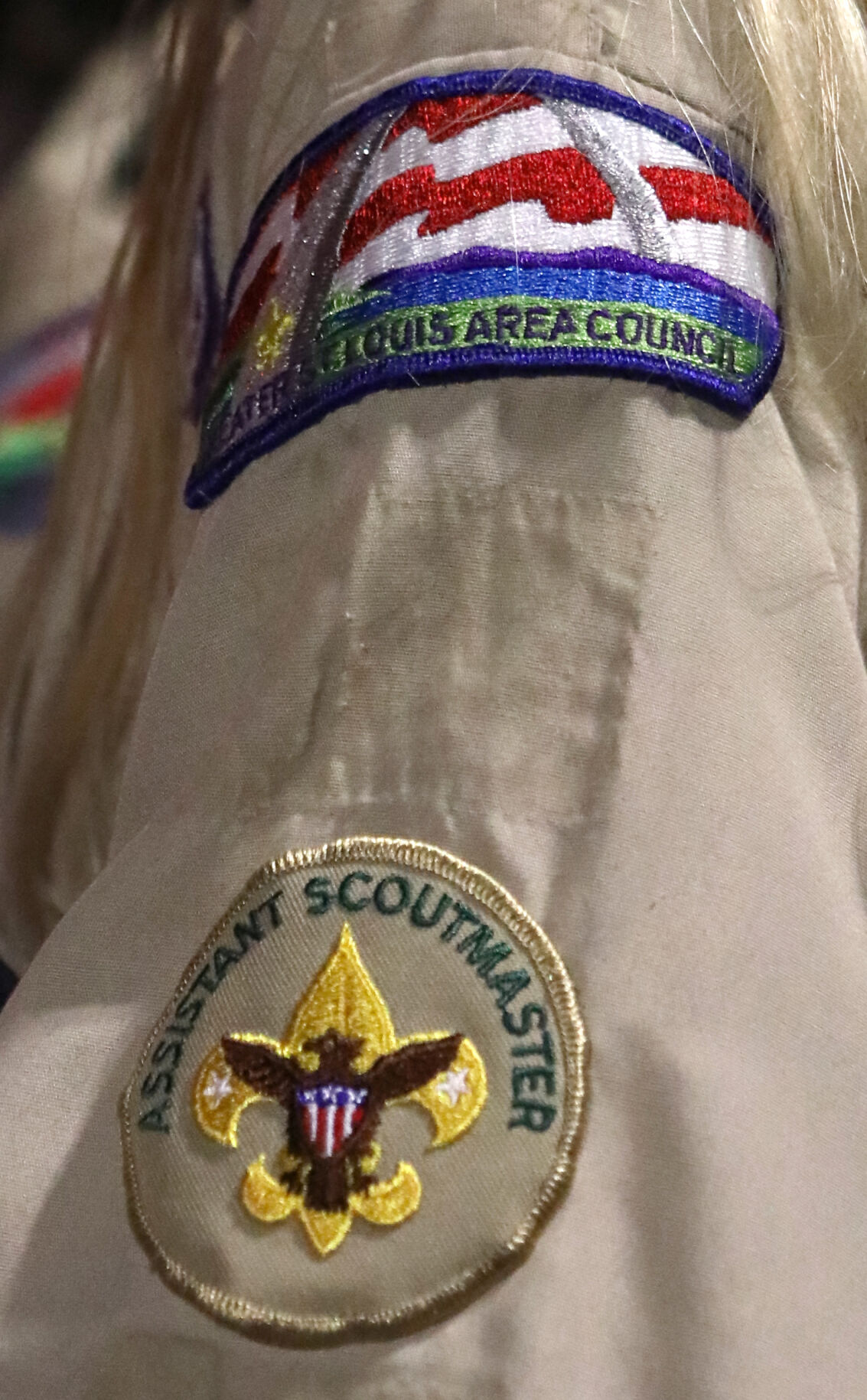 Patches decorate the uniform of a Troop 636 Scouting BSA member Thursday, Nov. 5, during the troop’s meeting. 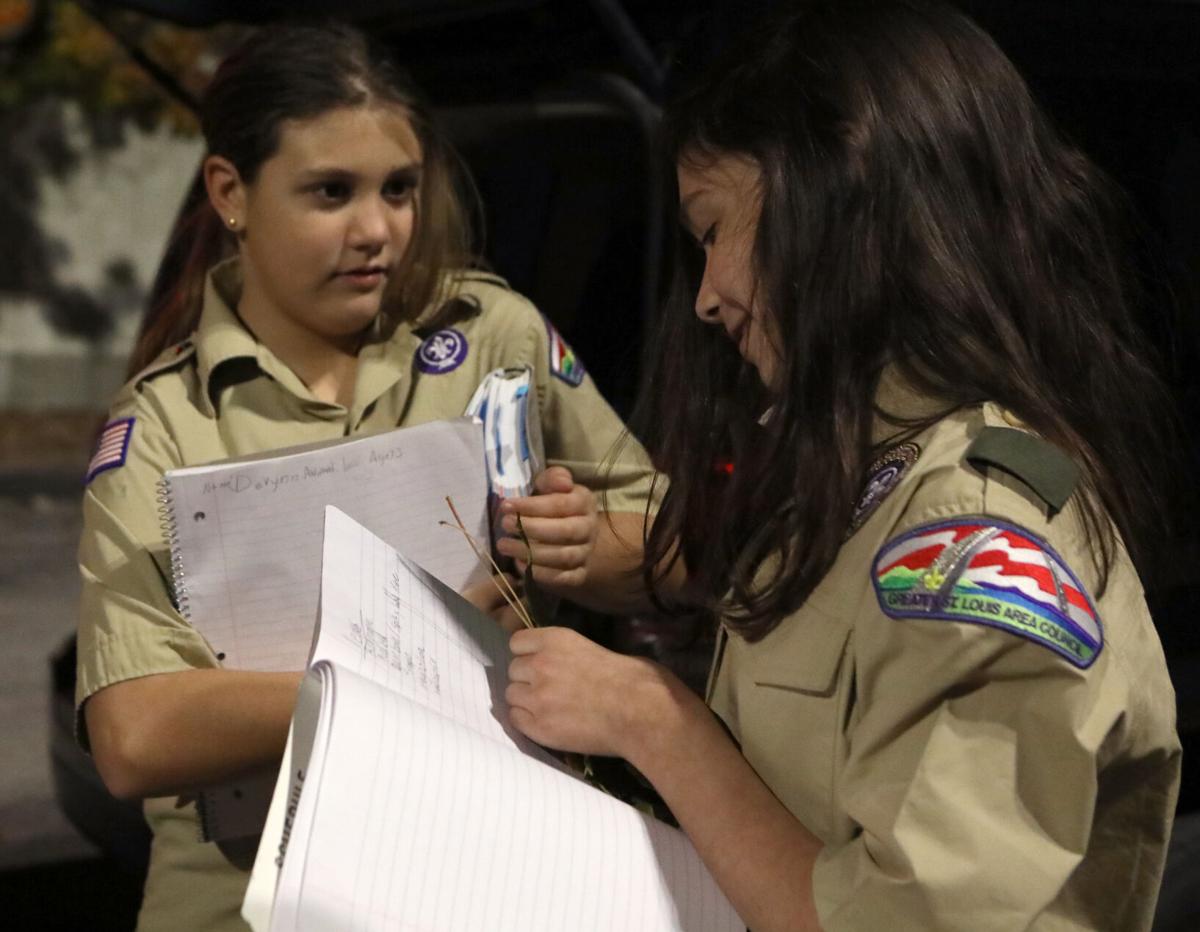 Isis Hasty, 11, left, and Ella Moseley, 11, look at their notes during a troop meeting at Cinema 1 Plus in Washington Thursday, Nov. 5. 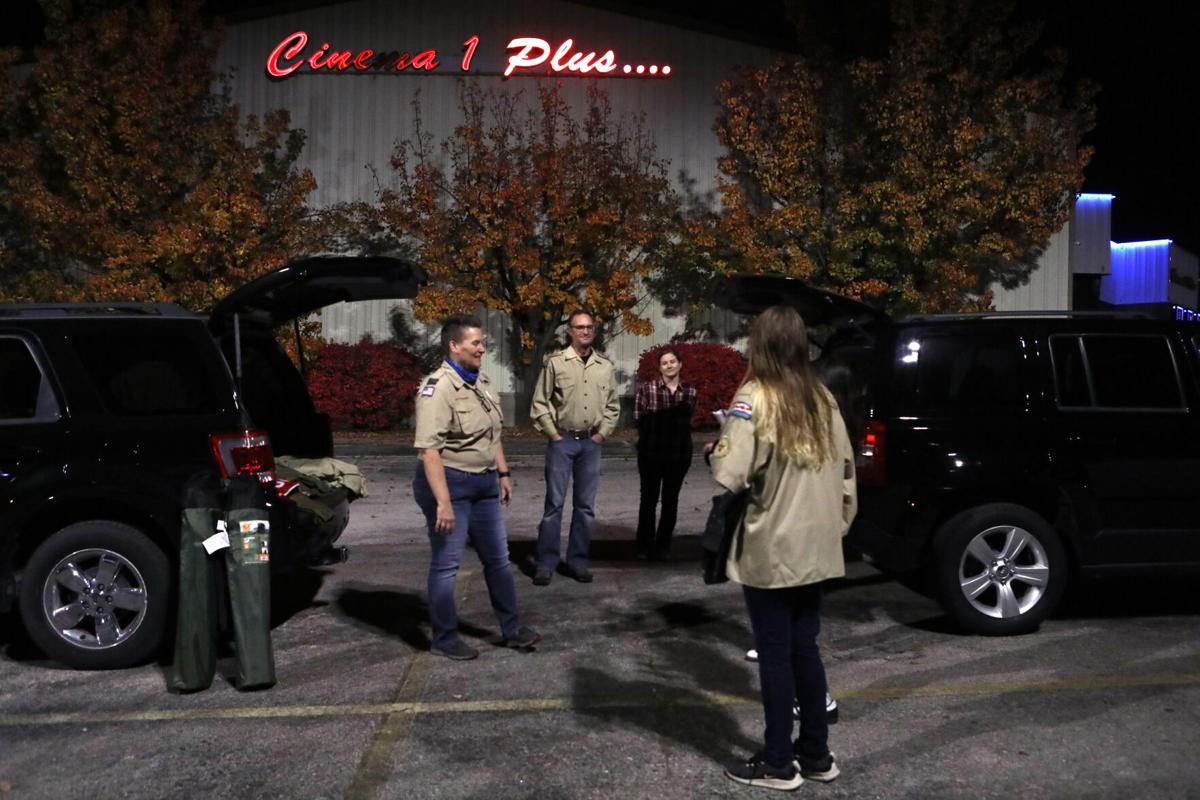 Troop 636 leader Michele Wissmann, left, conducts a meeting for Scouting BSA Troop 636 at Cinema 1 Plus in Washington Thursday, Nov. 5. The troop has five members and began earlier this year. 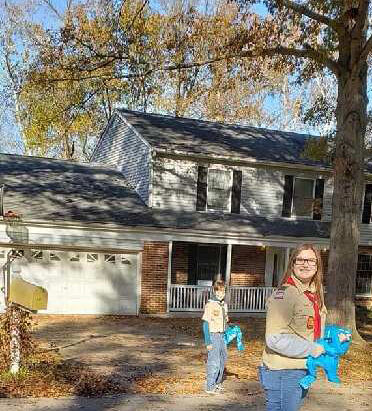 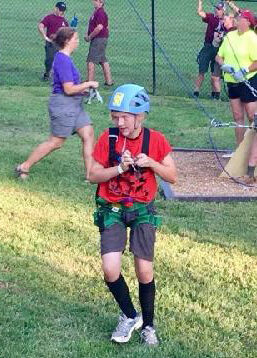 Kaitlyn Kuelker, 10, prepares for a climb at the 2020 Osage Camporee.

Patches decorate the uniform of a Troop 636 Scouting BSA member Thursday, Nov. 5, during the troop’s meeting.

Isis Hasty, 11, left, and Ella Moseley, 11, look at their notes during a troop meeting at Cinema 1 Plus in Washington Thursday, Nov. 5.

Troop 636 leader Michele Wissmann, left, conducts a meeting for Scouting BSA Troop 636 at Cinema 1 Plus in Washington Thursday, Nov. 5. The troop has five members and began earlier this year.

Kaitlyn Kuelker, 10, prepares for a climb at the 2020 Osage Camporee.

A chorus of giggles pierces the quiet night that has settled around Cinema 1 Thursday evening. Under the beams of the streetlights, four girls, three clad in matching tan button-ups, unfold and admire their new flag. It reads: “Troop 636 Rotary Club Washington, Mo.”

The troop is not affiliated with Girl Scouts. It’s Washington’s first all-girls Scouting BSA troop, the organization known for 108 years simply as Boy Scouts. The name changed in February 2019 to reflect a new guideline welcoming any child to join the organization.

Troop 636 formed in August 2020 with five eager girls, ages 11 to 13, and a willing Scoutmaster in Michele Wissmann.

Wissmann, who serves as the district’s STEM chair, became involved with the organization in the late ’90s when her son joined Cub Scouts. When he advanced to Boy Scouts in 2002, she became a leader. Her son earned his Eagle Scout in 2008 and aged out of the program, but by then her daughter was 14, old enough to join Venturing, a co-ed outdoor adventuring group affiliated with BSA. Wissmann stayed active in both programs, primarily Boy Scouts Troop 439 through St. Francis Borgia.

When the decision to allow girls came down from the organization’s headquarters, Wissmann knew she wanted to form a new troop.

“I told them my daughter would have loved this if she was old enough,” Wissmann said. “I wanted it to be exactly the way the boys’ troops were running. I wanted to give the girls the same opportunities.”

The friendships were instant. A couple of the girls had known each other previously but were not close, and there were also some who knew no one. It would have been hard to tell watching them race around the parking lot Thursday.

Emma said her favorite part of BSA so far has been making new friends. The other girls nodded their heads emphatically.

“My favorite part is I can make new friends and be as weird as I want, and they won’t judge me,” Isis said with a grin.

In addition to friendship, the girls also enjoy camping. The troop earned a second-place finish in the 2020 Osage District Camporee, an annual contest of camping and outdoors knowledge. The group started prepping in August with weekly meetings where the girls learned skills such as knot-tying, first aid, hatchet safety, compass navigation and fire building.

The girls also have gone horseback riding and on a hike at Klondike Park.

Isis’ mom, Ashley Jacquin, said her daughter has blossomed in the group with the help of her new friends and Wissmann.

“Michele is not one of those leaders who is super strict,” Jacquin said. “She’ll let them play and joke and then steer them back. (Isis) likes Michele a lot.”

The other girls’ parents have noticed marked changes in their daughters already.  Ella’s parents, Jason and Teresa Moseley, say they’ve seen their only child become more uninhibited and sociable.

“I think she just wanted to get out and enjoy stuff,” Jason Moseley said. “She wants to sign up for journalism at school. She’s so much more outgoing.”

Jacquin has also seen her daughter thrive in her new activity.

“She marches to her own beat,” Jacquin said. “We went into Cub Scouts and the acceptance was immediate. She had a blast. Now she’s moved up to BSA and is one of the leaders. She’s making huge strides.”

Although Troop 636 is Washington’s first all-girls Scouts BSA group, it’s not the first in the county. Villa Ridge and Gray Summit’s Troop 443 is led by Scoutmaster Matt Ahal, and Union’s Troop 812 is under the guidance of Scoutmaster Becky Devos.

Devos first got involved in Boy Scouts 15 years ago when her son joined Cub Scouts. She and her husband stayed involved after their children aged out, and she’s now the district’s activities chair.

“I love scouting. It made my kids kinder, caring and more grown up,” Devos said. “I can see all it provided and I want to give others those opportunities.”

Her all-girls troop has five members: Kaitlyn Kuelker, 12, Brianna Kuelker, 13, Maddie Rodrigues, 13, Alyssa Monahan, 16, and Bella McFarland, 16. It was formed in May 2019, includes several sisters of Boy Scouts and frequently holds activities together.

Devos explained that even before BSA expanded its groups to include girls, many of the Scouts’ sisters would come along to the events.

“It’s a great opportunity for sisters of my Boy Scouts to experience the same rewards the boys get to,” she said. “My comeback to those who say, ‘Oh my gosh, why are there girls in there?’ (would be) ‘Girls have always been there, and they’re always going to be there. If we had our girls learning the oath and law like we have our boys doing, just think how much better we’d be.’ ”

One such opportunity Devos has tried to offer is leadership, a role her oldest member has filled with ease.

Bella McFarland, 16, has enjoyed being a role model to younger girls and boys, including her little brother, Sam, through her BSA involvement.

Bella, a sophomore at Union High School, was, for a short time, the only cousin on her mom’s side to not take advantage of the adjusted rule allowing girls into BSA. She was eager to join Troop 812 in May, but she didn’t want to leave Girl Scouts, which she’d been involved in since first grade, to do it. So she’s stayed active in both — starting work now on her Gold Award project for Girl Scouts and hoping to complete her Eagle Scout project next year.

“I thought there would be more opportunities if (I) did both,” Bella said. “You earn very different types of badges.”

So far the group has enjoyed a five-day hiking and camping trip at Meramec State Park and explored the caves at Crystal City Underground by kayak. They even volunteered to clean up after the election Nov. 3.

The members of troops 636, 812 and 443 are not only earning merit badges. They’re also participating in service projects, the biggest being the annual Scouting for Food donation collection to benefit area food pantries.

“This is where they get a bulk of their food every year,” Devos said. “And the need is higher this year.”

Across the Osage Region, which includes 51 groups comprising 766 kids from Franklin and Crawford and parts of Warren counties, the 2019 Scouting for Food collected 65,642 food items for 23 local pantries.

“We’ve seen (that) the greater the need, the more people give,” said Ken Etter, senior adviser for the Osage District.

The 2020 event will take place the week of Nov. 14-21. Scouts will place the bags the first Saturday and return to pick them up with collected food inside the following week.

“Sometimes (the bags) blow away, so it’s OK to leave food on your porch in a grocery bag,” Devos said. “You’ve got little kiddos trying to tie the bags to the doors, and sometimes they miss one.”

On top of looking forward to Scouting for Food, Devos’ and Wissmann’s members are eagerly waiting for more girls to join the ranks. The annual BSA recruiting blitz, which runs Nov. 1-7, has resulted in 75 members across the Osage District, but so far only five girls — the five in Wissmann’s Troop 636.

Wissmann said her ideal troop size would be 10 to 12, but there will be a place for any girl who wants to join.

“It was challenging to find the first girls to step out of the box and say, ‘I want to do this,’ ” Wissmann said. “But once other girls see what we’re doing, I think it will be easier for girls in the future to step up and say, ‘Yeah, that’s something I’d like to try.’ ”

For more information or to join a local troop, visit stlbsa.org/osage-district.

With rising COVID-19 cases, the popular Boy Scouts Scouting for Food drive was put off two days before it was scheduled to start.