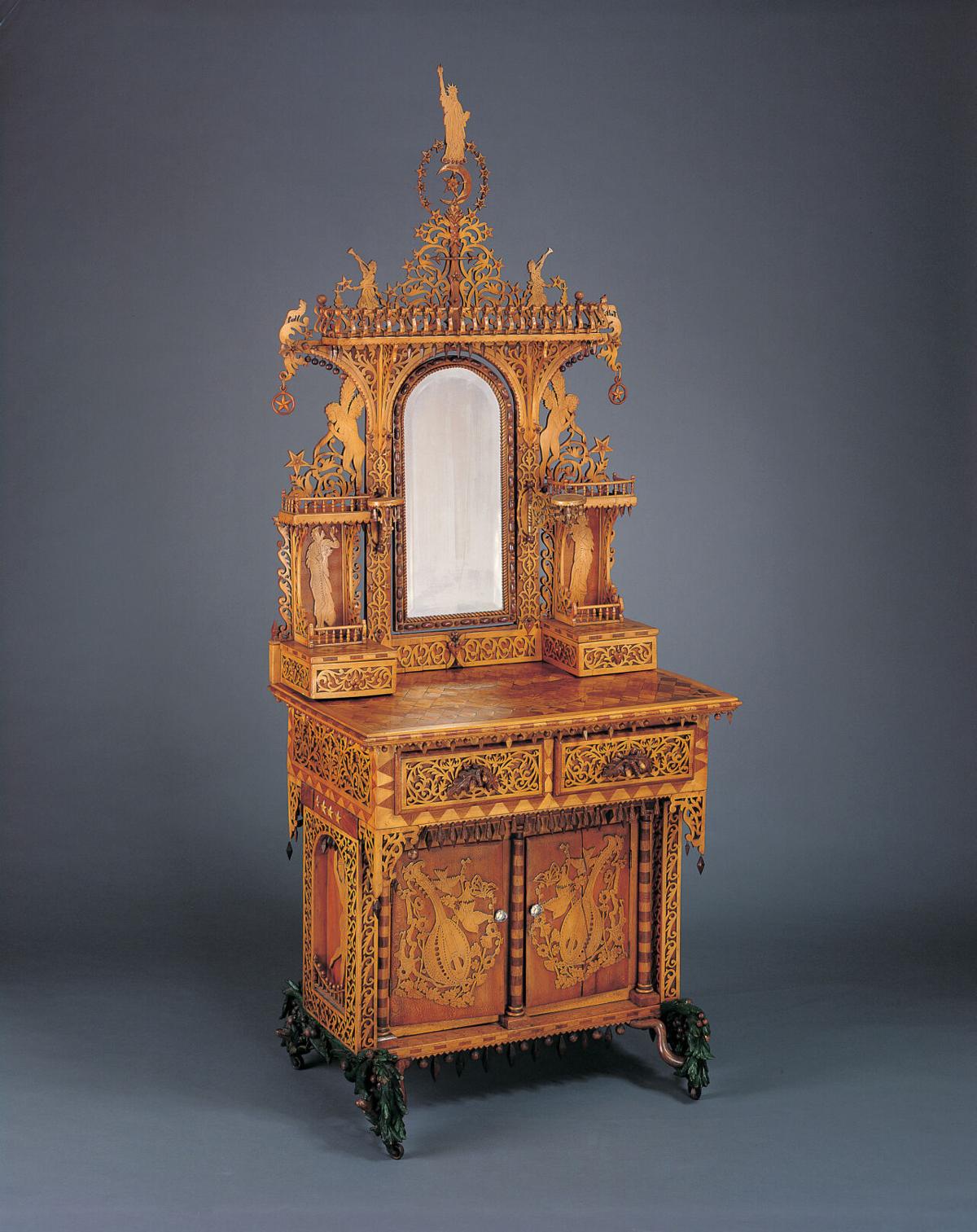 The Statue of Liberty Cabinet featured in the “Art Along the Rivers” exhibit at the St. Louis Art Museum was made by Hermann jeweller Julius Hasenritter around 1886 to 1890. The piece is on loan from the American Folk Art Museum in New York City, where it is part of the permanent collection. 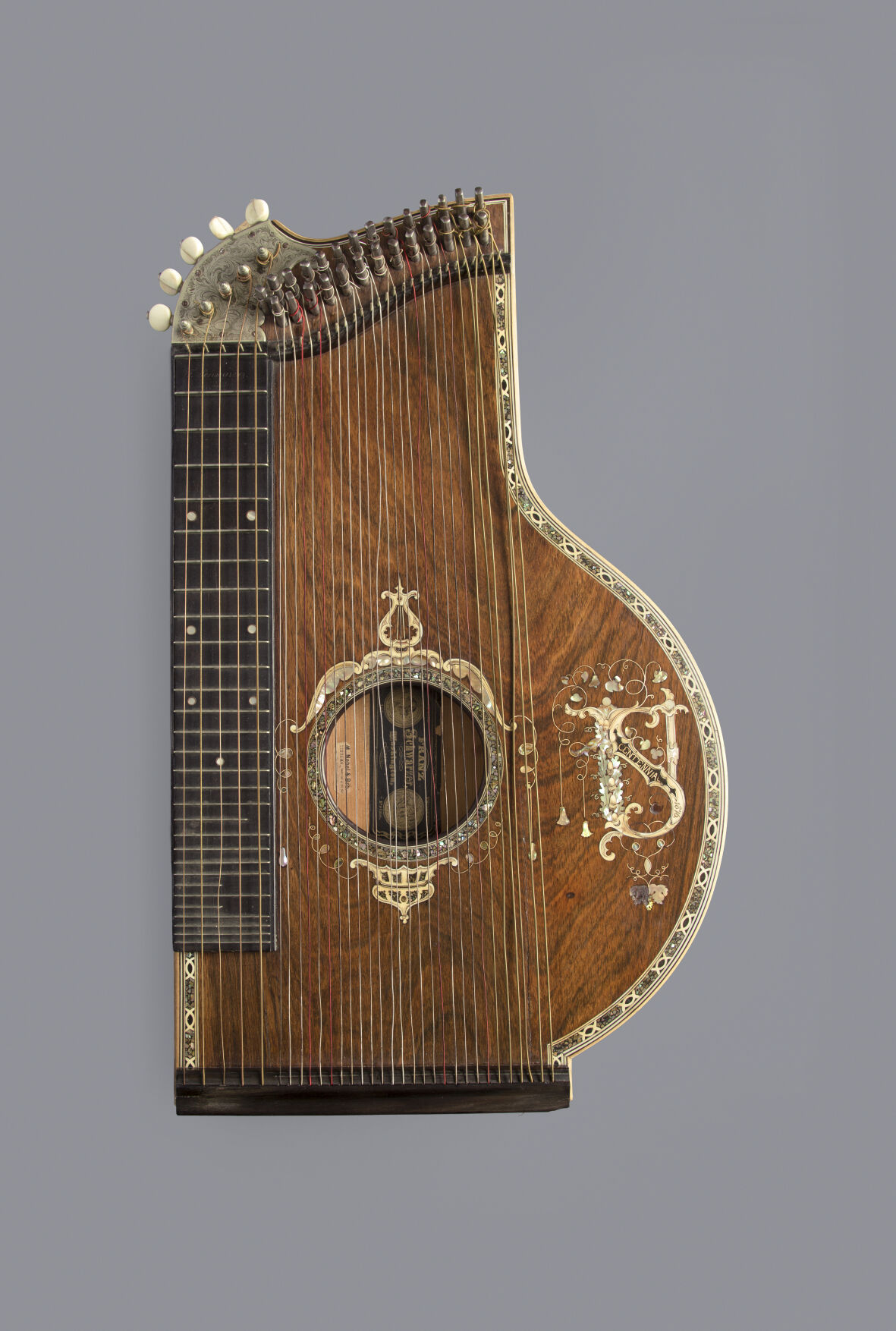 A concert zither crafted by Franz Schwarzer as displayed at the “Art Along the Rivers” exhibit at the St. Louis Art Museum. Schwarzer and his employees produced over 11,000 instruments at his Washington factory from 1867 through the 1920s and earned international acclaim. 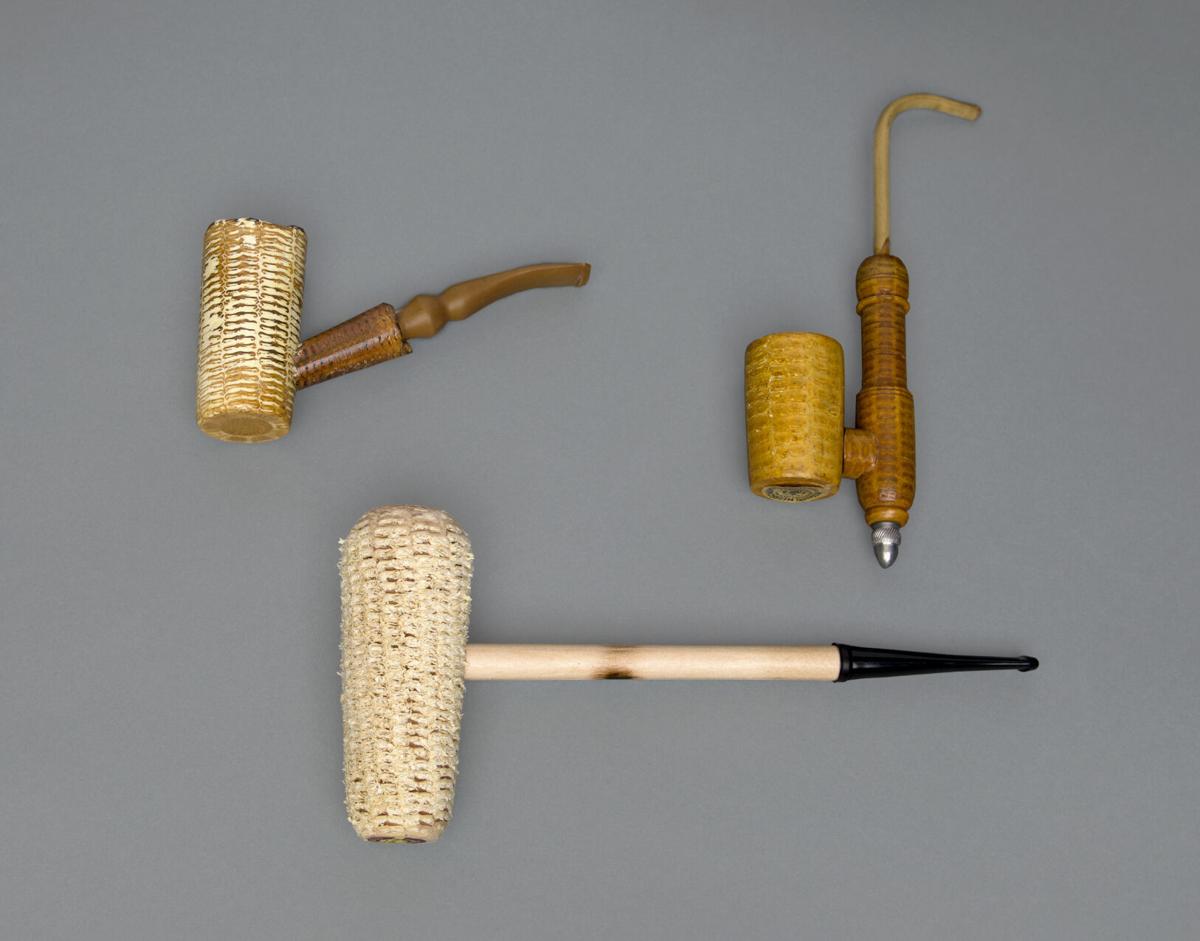 Three corncob pipes from what’s now the Missouri Meerschaum Co. as displayed at the “Art Along the Rivers” exhibit at the St. Louis Art Museum. The Washington factory was founded by Henry Tibbe, who patented the process of coating the pipes with plaster and established a nationwide and later worldwide distribution system for the product.

The Statue of Liberty Cabinet featured in the “Art Along the Rivers” exhibit at the St. Louis Art Museum was made by Hermann jeweller Julius Hasenritter around 1886 to 1890. The piece is on loan from the American Folk Art Museum in New York City, where it is part of the permanent collection.

A concert zither crafted by Franz Schwarzer as displayed at the “Art Along the Rivers” exhibit at the St. Louis Art Museum. Schwarzer and his employees produced over 11,000 instruments at his Washington factory from 1867 through the 1920s and earned international acclaim.

Three corncob pipes from what’s now the Missouri Meerschaum Co. as displayed at the “Art Along the Rivers” exhibit at the St. Louis Art Museum. The Washington factory was founded by Henry Tibbe, who patented the process of coating the pipes with plaster and established a nationwide and later worldwide distribution system for the product.

In the early 1900s, a corncob pipe from the H. Tibbe & Son Co., later rebranded as the Missouri Meerschaum Co., would have been a practical and affordable item along the Missouri River, in Washington and beyond.

The thousands of people, many of them working class, who smoked from these pipes likely didn’t view the instrument as a piece of art. A century-plus later, however, the item is being displayed at the St. Louis Art Museum (SLAM) alongside other relics of life at the confluence of the two mightiest rivers in North America, the Mississippi and Missouri rivers, as well as the Illinois River. The special exhibit, called “Art Along the Rivers,” is a celebration of Missouri’s 200 years of statehood and features more than 150 objects created and collected in the region — from Hannibal south to the Old Mines in Washington County and from Hermann east to Cairo, Carbondale and Alton, Illinois — over 1,000 years. More than 50 museums across the country have loaned pieces for the event, which began Oct. 3 and runs through Jan. 9.

Tickets to the exhibit can be purchased in person at the museum or through MetroTix, which charges a service fee. Regular-price tickets are $12 for adults, $10 for seniors and students and $6 for children ages 6 to 12. Tickets to the exhibit are free for museum members and children younger than 5. Admission to the museum itself is free. The museum is opens at 10 a.m. Tuesday through Sunday and closes at 5 p.m. — or 9 p.m. on Fridays.  It is closed on Mondays. Last entry to the exhibit is one hour before the museum closes.

Among the items included in the exhibit are a 1903 oil painting, “The Mississippi at Elsah,” by American artist Frederick Oakes Sylvester, who focused much of his work on the town. It was there that art historians say he moved beyond impressionism and toward the “spiritual values of nature.” As a town in Illinois, the entire village of Elsah was placed on the National Register of Historic Places in the 1970s.

Other items of note in the exhibit include a 1907 oil painting of “Marquette and Joliet on the Mississippi” by American artist Oscar Edward Berninghaus. There are also a number of works included in the exhibit from western artists and photographers who worked with Native Americans and items from the 1904 World’s Fair in St. Louis, including a “spectacular punch bowl created for the St. Louis World’s Fair by Libbey Glass,” according to the museum’s curators.

Among the local pieces on display are the corncob pipes, an antique concert zither made by Franz Schwarzer — both of which are on loan from the Washington Historical Society — and a portrait of Daniel Boone and wood-carved furniture from German immigrants near Marthasville and Hermann.

“By pulling together this seemingly disparate group of objects, the exhibition aims to amplify the many perspectives represented in these works of art,” said Amy Torbert,who helped curate this exhibition along with Melissa Wolfe.

Officials said they have organized the exhibition thematically rather than culturally or chronologically because “themes reveal how geological and cultural confluence shaped the content.”

The exhibit is split into five themes: art at the confluence, art on display, art in production, art communities and art as advocate. Across the various time periods, people, perspectives and purposes for making the included pieces, the rivers remain a common thread throughout.

Katie Dieckhaus, director of the Washington Historical Society Museum, said the zither and corncob pipes both tell the story of how Washington — with its access to the Missouri River providing easy exportation — helped shape the larger region.

“Both Schwarzer and Henry Tibbe (who started the corncob pipe industry in Washington) improved upon what was already there,” Dieckhaus said. “Both helped put Washington on the map internationally.”

Schwarzer once advertised himself as “the King of Zither Manufacturers,” with good reason. The Austrian native studied design and wood craftsmanship in Vienna before immigrating to America in 1864 with dreams of becoming a farmer. By 1867, however, he had sold his farmland in Holstein and moved to Washington, where he began crafting zithers to meet demand from the large German population. He quickly earned international recognition for the unique artistry of the pieces, and in 1873, three concert zithers similar to the one on display in St. Louis earned the Gold Medal of Progress at the Vienna International Exposition.

At the same time, the Dutch-born Tibbe hoped to craft a cheaper but still durable version of the then-popular Turkish Meerschaum pipes, the German word for sea foam. He earned a patent in 1878 for his process of coating his pipes in plaster to make them last longer and over time experimented with larger and more artistic designs. The pipes are still shipped internationally today.

Dieckhaus added that both also embody the blending of immigrant traditions that helped create the region’s unique culture. The area’s proximity to the river made it a natural hub for westward expansion, and between the 1820s and 1880s, nearly 600,000 people of mostly western European origin migrated through the greater St. Louis area. They brought with them skills in woodworking, glassblowing, painting, music and more that are explored in depth in the pieces exhibited, such as in an ornate cabinet made in the late 1880s by Hermann jeweler Julius Hasenritter, on loan from the American Folk Art Museum in New York City.

At the same time that Europeans were arriving, the natives of the river region — members of the Osage Indian Nation and other native groups — were being forcibly removed by the U.S. government. Although artifacts produced and preserved before colonization are included in the exhibit, also on display are pieces that respond to their interactions with encroaching people of European descent.

In spite of policies preventing many people of Asian descent from immigrating to the U.S. in the 1800s, the first Chinese immigrant to St. Louis arrived in 1857, with several hundred more people following in the 1860s. Fleeing violence, several communities of eastern European Jews also made homes in the area.

The region also became home for many African Americans leaving the South after the Civil War and, later on, after violence against them during the Jim Crow era. Between World War I and the 1930s, the population of African Americans in St. Louis doubled, according to SLAM, and work made in response to the hostile environment they often faced features prominently in the exhibit.

Immigration to the area continued through the latter half of the 20th century, as people — including many groups of refugees — arrived from Mexico, Vietnam, Somalia and Bosnia. And as recently as August 2021, St. Louis announced intentions to welcome 1,000-plus refugees from Afghanistan.

All of these groups of people, and how they interacted with one another and with the river to form unique identities as a result, are explored in the exhibit.

“The works in Art Along the Rivers were all made by artists who experienced the mix of cultures, histories, and legacies that reside in the confluence region and responded creatively to make something entirely their own,” reads the book companion to the exhibit, written by the curators.

Washington-based artist Bryan Haynes said he completely understands the appeal. For him, like for countless other artists over the millennia, the rivers have been a muse. The Kirkwood native said that after he moved back to the area from California, he began to see what artist Thomas Hart Benton once described as the “hollows and bumps” of the Missouri landscape.

“I saw the area in a whole fresh light,” he said. “The landscape was so beautiful in its own way. I never purposefully said, ‘Oh, I’m going to paint the river.’ It’s just such a big part of the landscape.”

Haynes, who is a longtime illustrator and operates a gallery on Second Street in Washington, said he has likely painted dozens of pieces highlighting the Missouri River and various people who have lived near it over his career.

“Everybody (in Washington) is facing it. It’s like the town has a stage,” he said. “I’m a storyteller, and the rivers are kind of the lifeline that go through all the stories around here.”