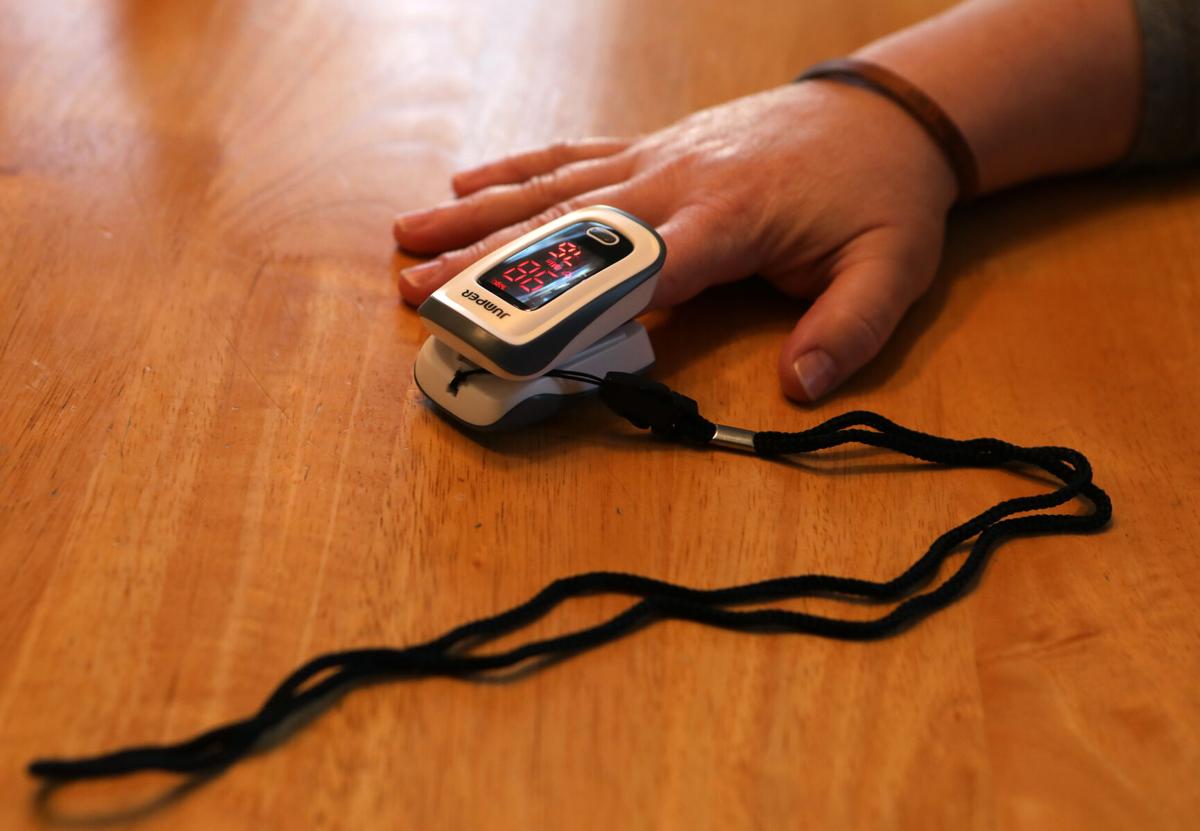 Theresa McGowan demonstrates how she checks her oxygen levels Monday, Nov. 16. McGowan checks her temperature and oxygen levels each evening ahead of a call she gets from the vaccine trial team. 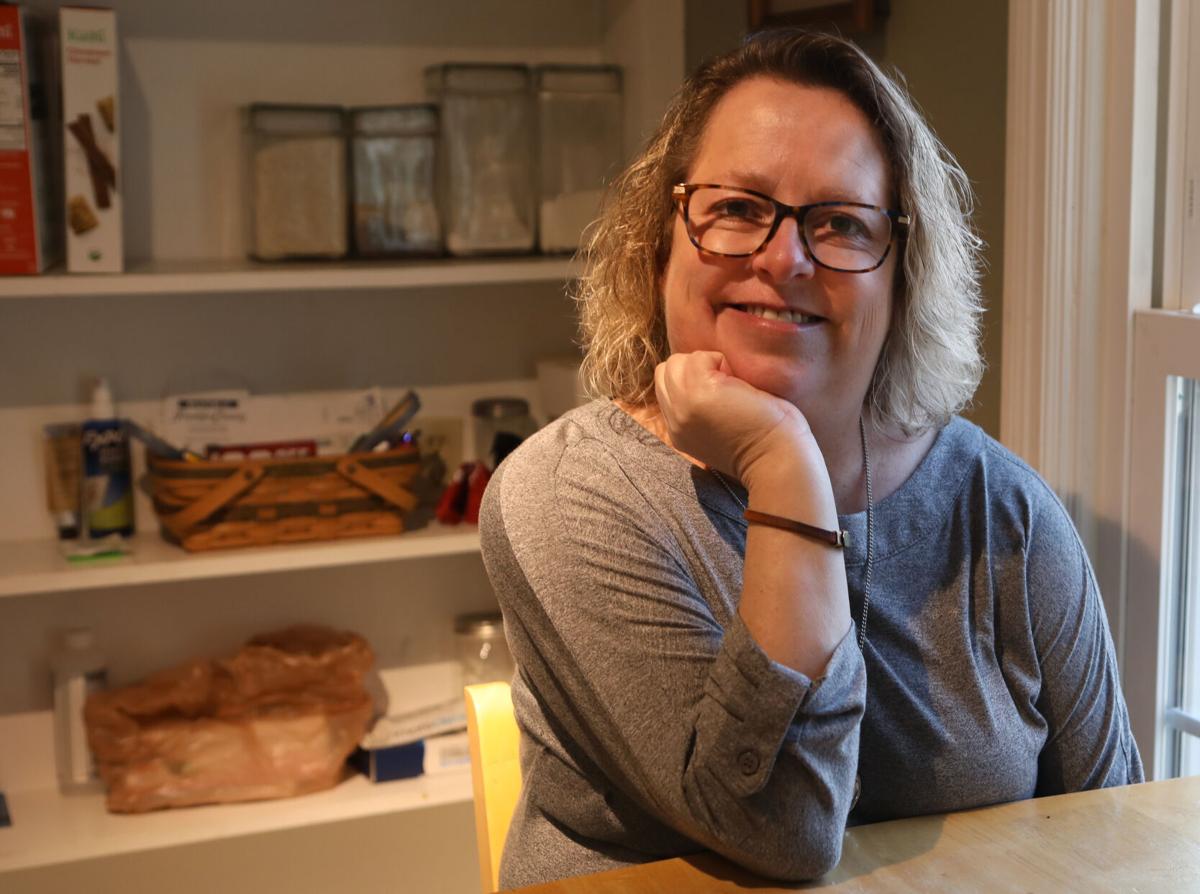 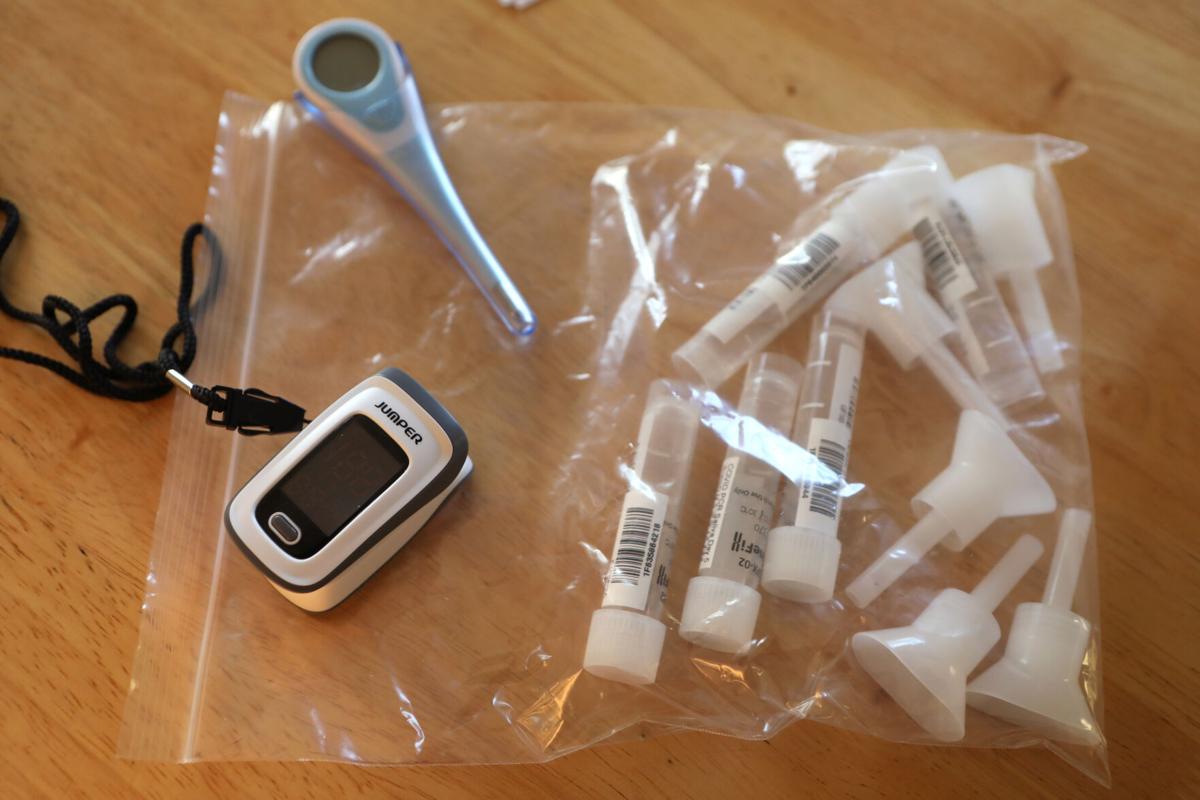 Shown is a pulse oximeter, thermometer and a bag of vials that Theresa McGowan uses as she takes part in a Moderna COVID-19 vaccine trial. 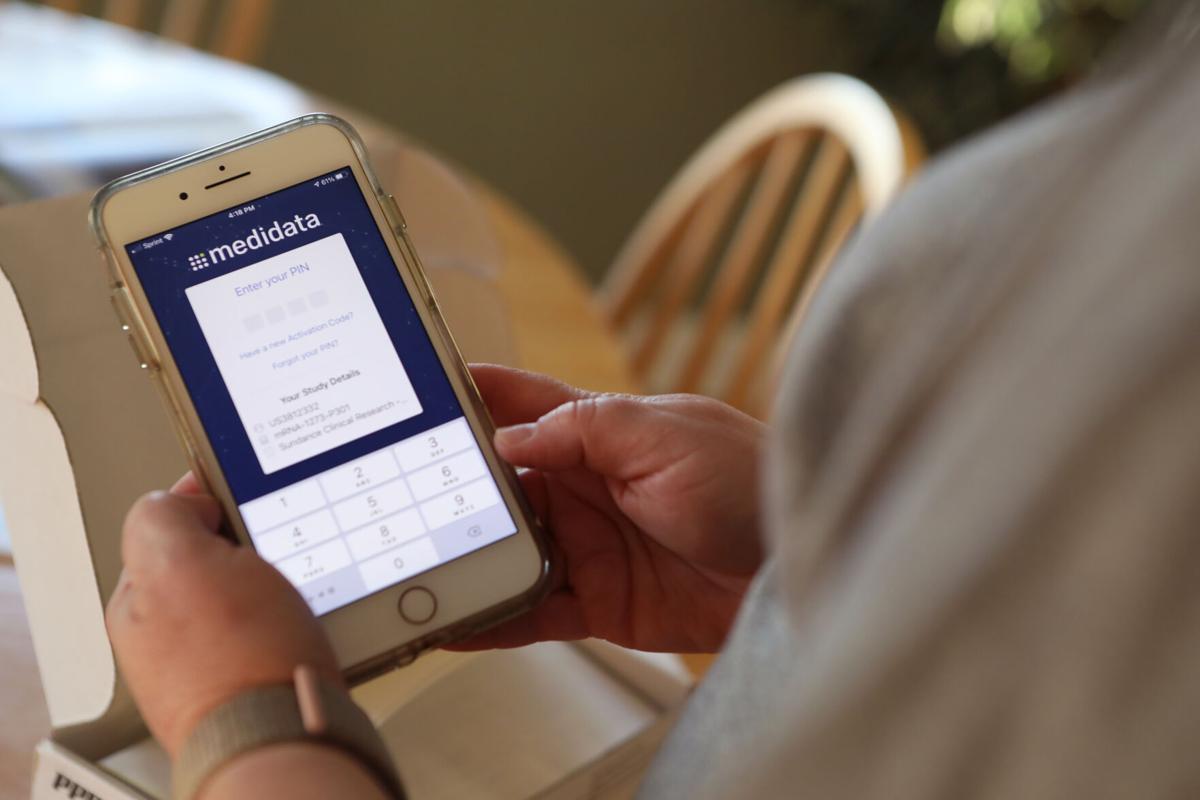 Theresa McGowan shows her medidata app, which she uses to track data related to her Moderna COVID-19 vaccine trial.

Theresa McGowan demonstrates how she checks her oxygen levels Monday, Nov. 16. McGowan checks her temperature and oxygen levels each evening ahead of a call she gets from the vaccine trial team.

Shown is a pulse oximeter, thermometer and a bag of vials that Theresa McGowan uses as she takes part in a Moderna COVID-19 vaccine trial.

Theresa McGowan shows her medidata app, which she uses to track data related to her Moderna COVID-19 vaccine trial.

To many Washington parents, Theresa McGowan is known as their children’s high school guidance counselor. The 54-year-old was a counselor at St. Francis Borgia Regional from 2004 to 2017, and since 2017 has been a counselor at Washington High School.

However, to Moderna Inc., a Massachusetts-based biotech company that reported $60 million in revenue in 2019, she’s known as “Participant No. 2,332” in its COVID-19 vaccine trial study. The 26-month study is relying on 30,000 volunteers across the country to test the effectiveness of the vaccination ahead of potential approval by the FDA.

“I think right now that’s our clear path to getting through the pandemic,” McGowan said of the vaccines. “That’s probably the only way to end this in the near future.”

McGowan became interested in participating in a COVID-19 vaccine study in April, when she first heard of companies in the early stages of developing a COVID-19 vaccine. She said seeing the daily news stories of people losing loved ones, of hospitals in New York City overflowing, and also seeing the burden on health care professionals and other essential workers motivated her to act.

“I started mentioning it to my family, and at first they looked at me like I was insane,” McGowan said. “It was a tug at my heart that just didn’t go away. I viewed (participating) as an opportunity to look beyond myself and try to do something for the greater good.”

McGowan, a self-described “medical nerd” who keeps up on the latest health care news, reached out to Moderna as soon as she heard it was recruiting participants in St. Louis. She didn’t personally know anyone else signing up, but did get some of her nerves alleviated when she read that Dr. Alex Garza, head of the St. Louis Metropolitan Pandemic Task Force, also had signed up for Moderna’s study.

“That was kind of a sigh of relief, because this is a guy who knows what he’s doing, so if he feels safe, then I feel better about this,” McGowan said.

Before she could join the study, McGowan underwent two rounds of phone screenings to determine whether she’d be a good fit.

“They were definitely looking for a very specific kind of candidate,” she said. “The biggest thing they were looking for was people with high exposure through their occupation or lifestyle. I think because I’m a school counselor and come in contact with so many teenagers every day, that was appealing to them because ultimately what they’re looking for is someone who can challenge the vaccine.”

When she learned she’d been accepted, McGowan still had to sign a 20-page consent form, which she was instructed to read thoroughly. With her signature, she agreed to follow all the instructions of the study for the next 26 months and allow her blood to be used for research for the next 15 years.

Along with McGowan, around 600 other St. Louis area residents were accepted into the study. The St. Louis portion of the study is conducted at St. Louis University and at Sundance Clinical Research in Creve Coeur. At nearly 45 miles away from Washington, Sundance is the closer location and where McGowan has been completing all her appointments.

Each appointment consists of a COVID-19 test, a lengthy health questionnaire and getting blood drawn.

“Every time I go in they take what feels like a gallon of blood,” McGowan laughed. “They’re probably taking in the neighborhood of 15 test tubs.”

The vaccination part of the study involves two injections, given exactly 28 days apart. McGowan received her first on Friday, Sept. 18, and she monitored her symptoms daily until one week later, when someone from Sundance called her and completed a wellness check.

Exactly four weeks after the first injection, she returned for the second. She drives to Creve Coeur for in-person visits once a month and gets weekly phone calls in between, which she’ll keep up until the study is over.

She speaks weekly with the same physician who does her wellness checks, and the attending physician at her monthly checkups is always the same.

“You almost start to feel like they’re part of your family.” During her 26 months of participation, if McGowan has any kind of illness during that time, even just a runny nose from allergies as she had recently, she has to go to the clinic immediately for a COVID-19 test.

She also uses an app on her phone to report on her wellness and any symptoms every day.

“That’s the message I want to get out there is just how careful and meticulous they are at taking care of people in the study,” she said. “They were very transparent about what it was going to look like every step of the way.”

Across the study, she’ll be compensated a total of around $1,700 to help offset gas expenses and time spent in the facility and recording entries on the app at home.

However, McGowan stressed that she is not in it for the money.

“I’ve never done anything like this before, but we’re in the midst of a global pandemic here,” she said. “If I can do just a tiny bit to help out, I want to do that.”

The Science of the Studies

The Moderna study is a double-blind experiment, the gold standard of scientific study, which means neither McGowan nor her physician knows whether she is receiving the vaccine or a saline-based placebo. Because it would not be ethical to infect participants with COVID-19, the study has to collect its results based on who among the participants catches the virus by chance, and which injection they received.

“If that were the case, I still would feel like I’ve served my purpose of helping get a vaccine to market and putting an end to this nightmare we’re all living right now,” she said. Having a control group — in this case 15,000 participants who are not receiving the vaccine — is key to knowing whether the vaccine works. In the analysis Moderna released Monday, researchers reported that of the 95 instances of COVID-19 among the participants, 90 were people in the placebo group.

“This positive interim analysis from our Phase 3 study has given us the first clinical validation that our vaccine can prevent COVID-19 disease, including severe disease,” Stéphane Bancel, chief executive officer of Moderna, wrote in a release.

The Pfizer and BioNTech study, which included 43,538 participants, maintained a similar process and ultimately had 94 people in the study contract COVID-19. Based on whether those 94 had received a vaccine or a placebo, Pfizer could deduce a 90 percent effectiveness rate.

The results are not only far better than many in the health care world could have hoped for, they’re also comfortably above the 50 percent effectiveness rate that the FDA said it would require approved COVID-19 vaccines to demonstrate. While the federal agency normally spends about a decade testing a vaccination before it receives approval, officials are currently pushing to get COVID-19 vaccines approved within one year, an “unprecedented effort,” according to the trade publication Contract Pharma. The hope is that the vaccine will be available by the end of 2020 or beginning of 2021, and widely available soon thereafter.

Confidence in the Process

While several members of McGowan’s family are essential workers in health care, education and food service, she said they’ve been “extremely blessed” to have not had anyone contract the virus. She knows of others who were not as lucky.

“I know several people now who have lost their dads to COVID-19,” McGowan said. “It starts to get more personal as it gets to be people you know.”

Monday morning, however, was a bright spot for McGowan. She awoke to a notification from NPR promoting its article about the Moderna vaccine’s 95 percent success rate. She eagerly shared the article with friends and family, typing “we’re almost to the finish line.”

As COVID-19 cases in Franklin County and across Missouri continue to surge, she said being part of the study has given her a uniquely optimistic outlook.

“I have a lot of confidence in the science and in the process,” she said. “By the end of the year, I think we’re going to start seeing people get vaccinated. Even if at first it’s just our health care workers and elderly people. I can see the light at the end of the tunnel.”