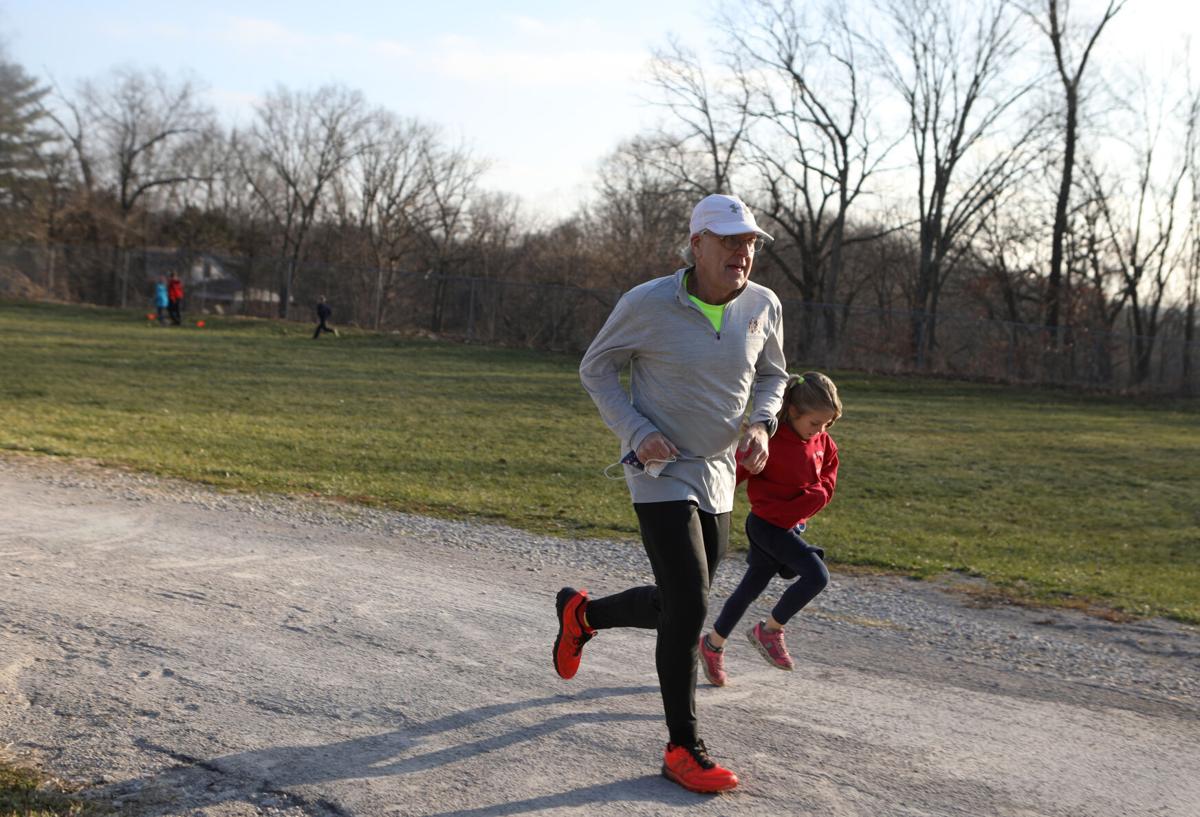 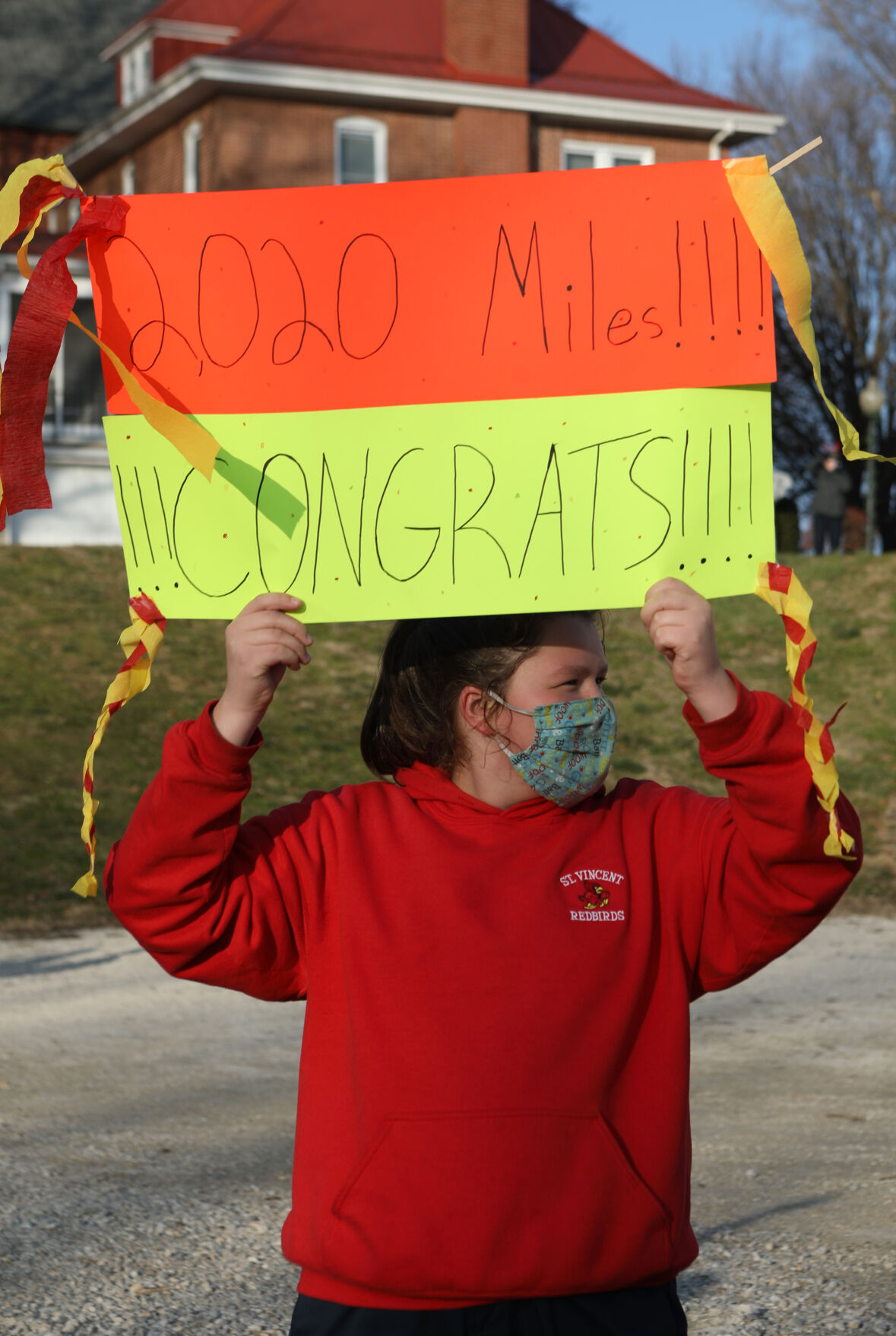 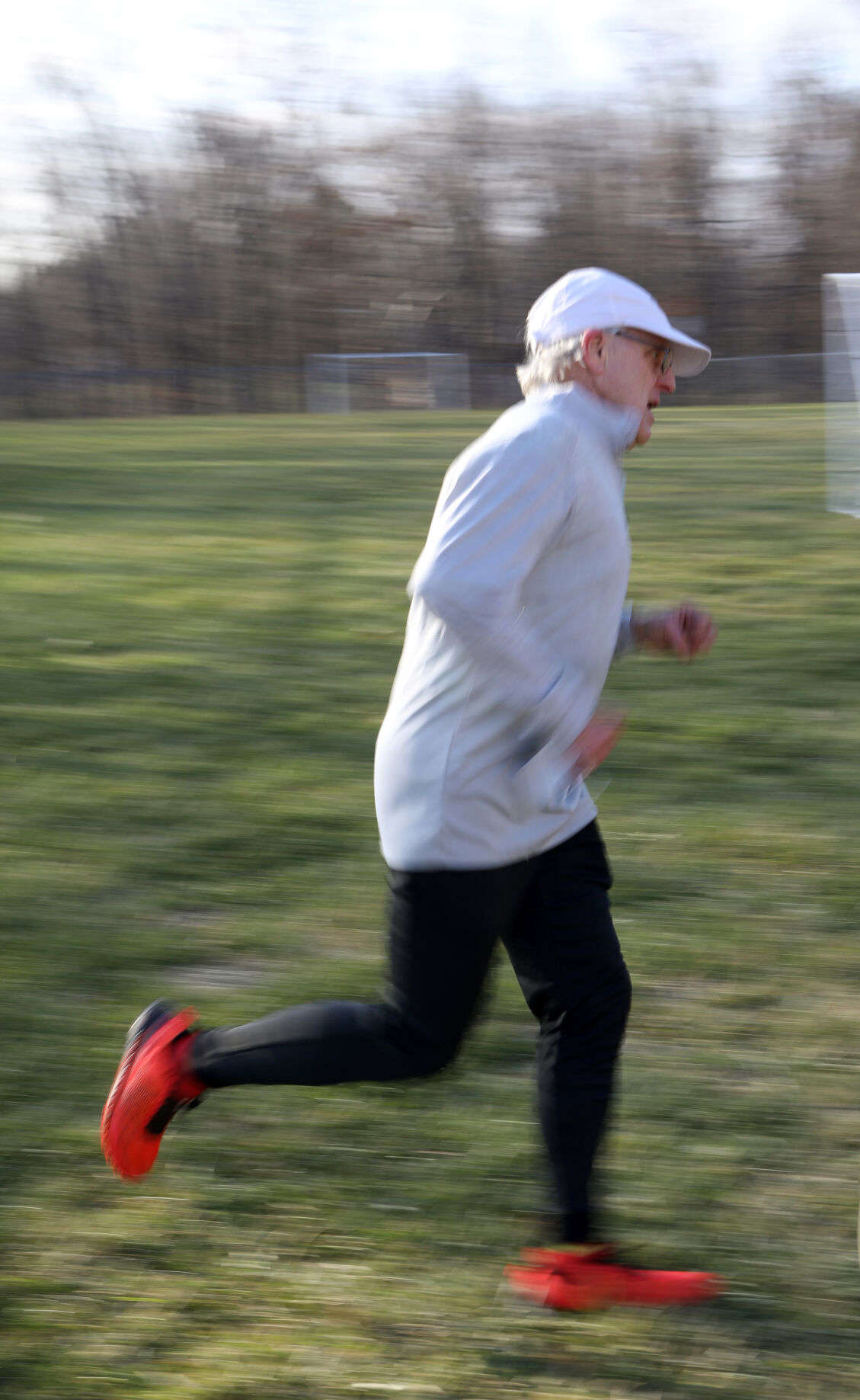 Mark Spann runs the final mile of his 2020 running goal at St. Vincent de Paul School Thursday, Dec. 17. The last mile consisted of eight laps around the field at the school. 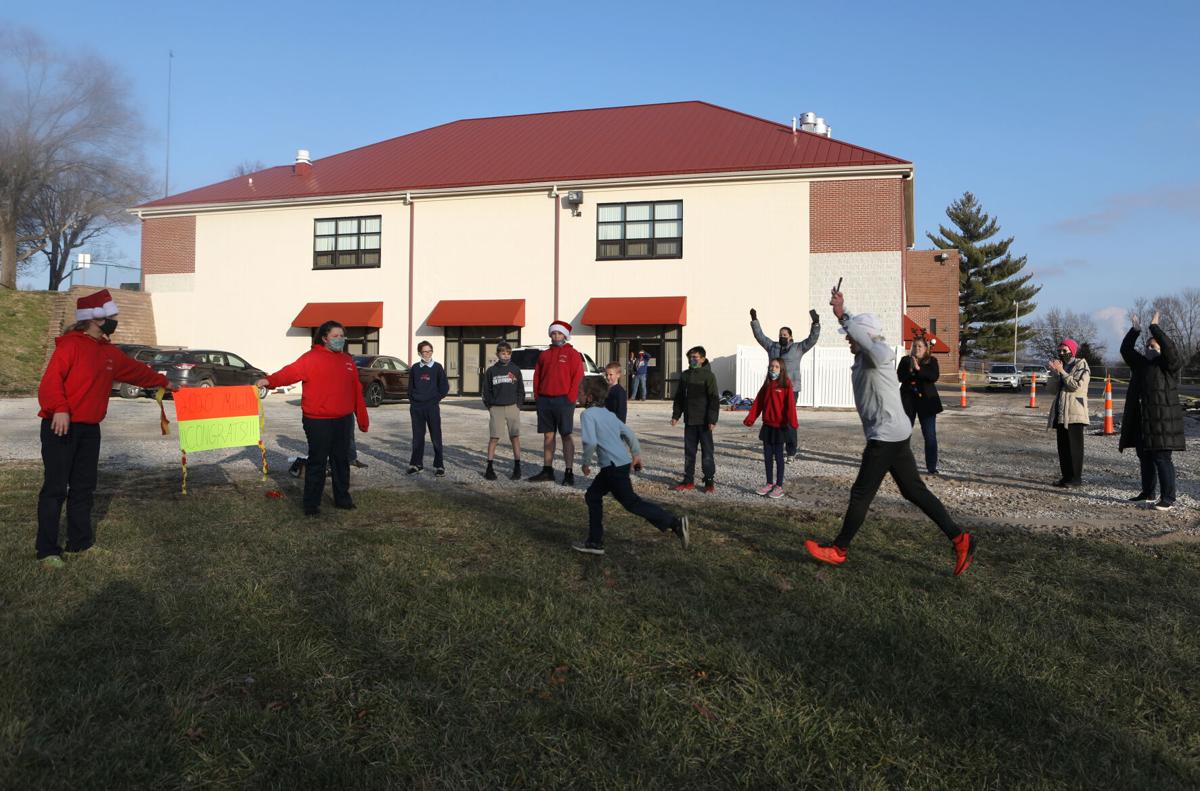 Mark Spann raises his arms as he finishes the last of the 2,020 miles he ran in 2020 while Avery Struckhoff and Clara Novak hold a sign Thursday, Dec. 17. 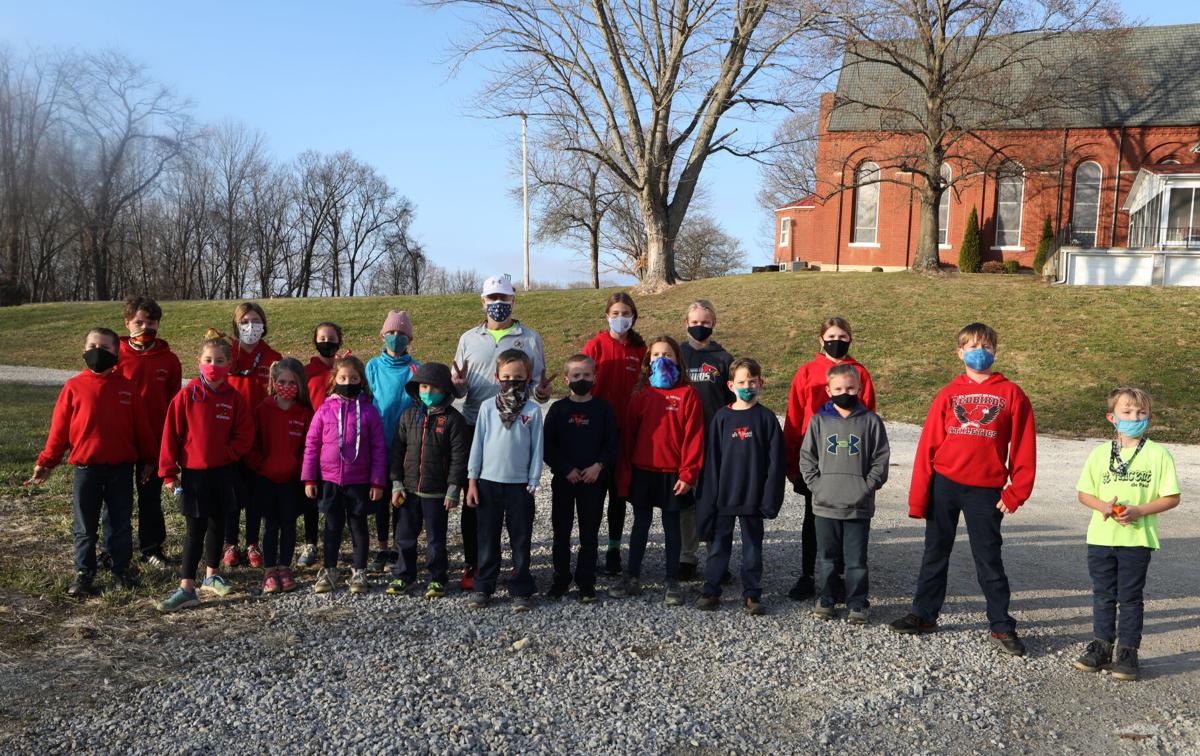 Pictured is Mark Spann with members of the running club, who are students at St. Vincent de Paul, after Spann finished running his 2,020 mile of the year.

Mark Spann runs the final mile of his 2020 running goal at St. Vincent de Paul School Thursday, Dec. 17. The last mile consisted of eight laps around the field at the school.

Mark Spann raises his arms as he finishes the last of the 2,020 miles he ran in 2020 while Avery Struckhoff and Clara Novak hold a sign Thursday, Dec. 17.

Pictured is Mark Spann with members of the running club, who are students at St. Vincent de Paul, after Spann finished running his 2,020 mile of the year.

A handmade orange and neon yellow sign with streamers taped to the back greeted Mark Spann, 64, as his bright red tennis shoes rounded the last bend of the last lap around the open grass field Thursday at St. Vincent de Paul in Dutzow.

The teacher and former principal of the school slowed to a stop in front of the nearly dozen students and teachers cheering him on, filming the welcome on his smartphone with a radiant smile.

“You’re a part of history today,” Principal Dr. Jennifer Maune shouted excitedly to the students. “Mr. Spann had a goal, and he worked hard and achieved it. He ran 2,020 miles in 2020.”

Finishing the last mile alongside him were some of the nearly 25 students in kindergarten through eighth-grade who are involved in Spann’s running club. As he was finishing up the last mile of his goal, his thoughts weren’t on what he was about to accomplish, but on how they were doing.

“I’m watching them and making sure they’re doing all their laps and just encouraging the stragglers,” Spann said.

Spann’s goal to “run the year” — 2,020 miles in 2020 — was inspired by friend and fellow runner Charles “Chuck” Eichmeyer. The two run together several times a week as part of an informal group of about a dozen regular runners that started over 30 years ago. Spann recently joined the group.

“We’re the McFun Runners,” Spann said. “We run at 5 a.m. three days a week, and then on Saturdays we run to McDonald’s. Then, after, we can eat.”

Eichmeyer completed a “Run the Year” challenge in 2019, and he encouraged Spann to attempt one too.

“It sounded like it would be tough but something worth doing,” Spann said.

It would be the most miles Spann had ever completed in a year, by at least 500 miles, if not more. Each month, he would have to clock around 170 miles to stay on track, more than 40 miles each week.

“The thing I get the most often is ‘Oh, I could never run that far,’” Spann said. “But nobody can. You start by running a mile, and then you try to run two. It’s a building process. You set a goal, and you work toward it in stages. Most of us can do more than we think we can do, because we just think we have to do it all at one time.”

Spann often ran in the morning, waking up at 4:30 a.m. and putting shoe rubber to the pavement no later than 5. His routes varied by the day. He said he enjoyed the quiet calm and the sunrises, as well as the feeling of starting the day already having accomplished something.

“When I got halfway, I started thinking ‘OK, I might actually be able to do this,’ ” Spann said. “Then when I got to where I only had 500 miles left, it became more of an ‘OK, I am going to do this.’”

The most challenging stretch of the challenge for Spann came when school started in August. The long hours on his feet at school combined with the frequent running left him in pain almost every day.

“My knees were just killing me,” Spann said. “For a couple of weeks I wondered if I’d be able to actually pull this off.”

Determined not to abandon his challenge, Spann kept running through the pain and icing his muscles after. He also started adapting the way his body moved, running like he did as a young adult when he first started running seriously.

“My stride went back to some things I did when I was marathoning, and that helped a lot,” Spann said. “Just getting myself back to what I used to do when I was younger (helped).”

Dr. Maune said Spann’s determination is an inspiration to students and staff.

“He sets goals and follows through,” she said. “He’s a wonderful example of working hard for what you want and is a positive influence on the whole St. Vincent community.”

Spann started teaching 17 years ago after a career with a health sciences publishing company. He had been a freelance writer and editor for about five years when he earned a teaching certificate through Central Methodist University.

“I’d always wanted to do it,” Spann said of teaching. “When my kids got older, it was kind of nagging at me. After 9/11, it became ‘I need to do something that’s not just for me.’ ”

Spann taught fifth grade at Clark-Vitt Elementary School in Union for seven years before serving as principal at Beaufort Elementary and then Central Elementary, both also in Union. He came to St. Vincent as principal in 2015 and stepped down at the end of the 2018-2019 school year.

“I felt like I wasn’t teaching with all my brain. I wanted to do one job well instead of two jobs OK,” Spann said. “And I missed being in the classroom.”

One of Spann’s students, eighth-grader Averi Glosemeyer, joined the club the first year it started because she wanted to get in shape. She has been in the club every year since, and now her younger brother, Colby, also has joined.

“(Colby) beat me on a 5K a couple years ago,” Spann laughed. “He was around 7. I was chasing him for about a mile and a half, and I caught up. Then he passed me. We had to go up this big hill, and I’m just dying. I could not catch up with this little kid. And he never lets me forget it.”

The Glosemeyer siblings ran the eight-lap mile alongside their teacher Thursday.

“He’s really excited because this is his first time tracking it all,” Averi said of her teacher’s 2020 running goal. “We all made bets on when he was going to finish.”

The runs are normally part of the St. Louis Read, Right & Run Marathon program put on by nonprofit GO! St. Louis. The annual program challenges students to read 26 books, “right” the community with 26 good deeds and run each week for 26 weeks in preparation for a fitness day in Forest Park. Spann said it’s not uncommon to see 5,000 kids in attendance.

Although the program is on hiatus this year due to COVID-19, Spann thinks his students can still learn through running each week.

“I hope they’re learning to just keep trying to improve every week,” Spann said. “I know, especially with the little kids, the beginning of the year they’re walking a lot, and come (spring) they’re hardly walking at all — because for those little legs, a mile looks like a whole lot.”

Even the littlest of legs showed determination as they raced to keep up with Spann Thursday. First-grader Vivian Boenker lost the elastic holding one of her pigtails together, but she kept her pace with one side of hair flowing in the crisp breeze.

For Spann, a mental resolve like that is one of the most important skills he can teach.

“Running has lifted me up from some dark places. It’s just so important, and it’s just fun,” Spann said. “I get to run with a bunch of kids, and I get paid for it? Who wouldn’t want that?”