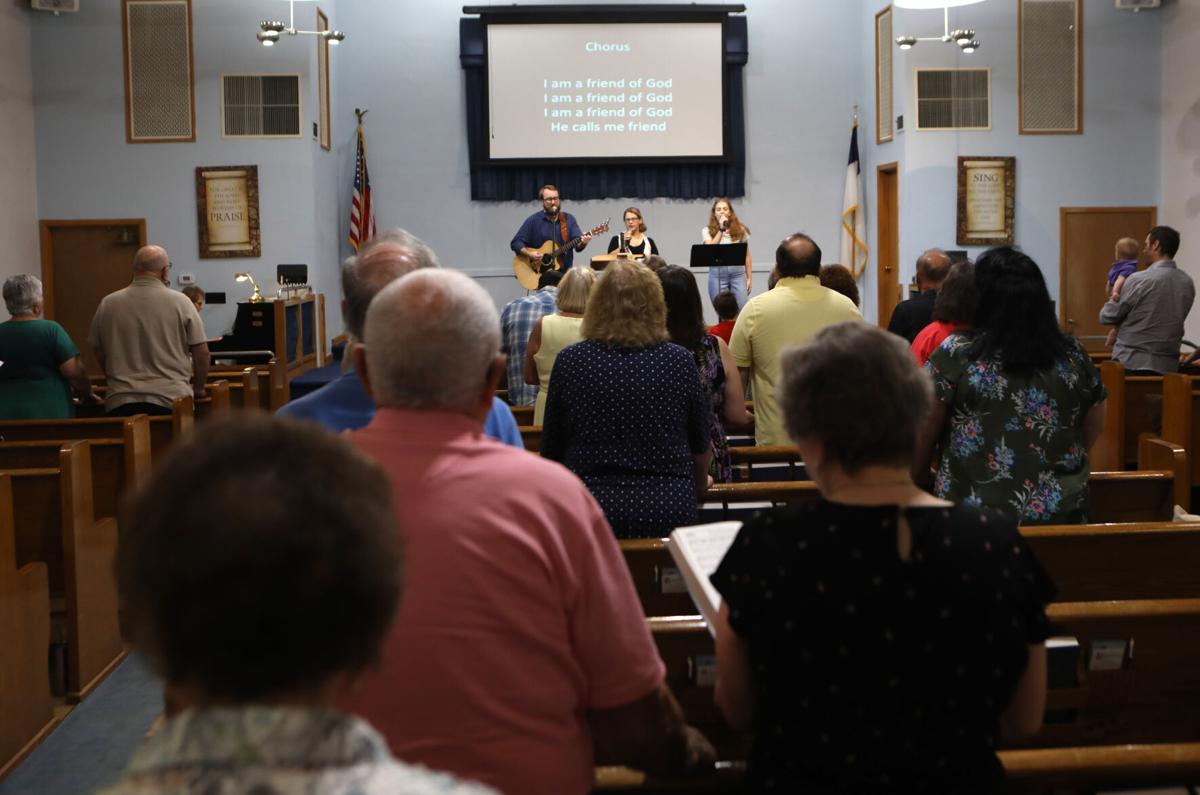 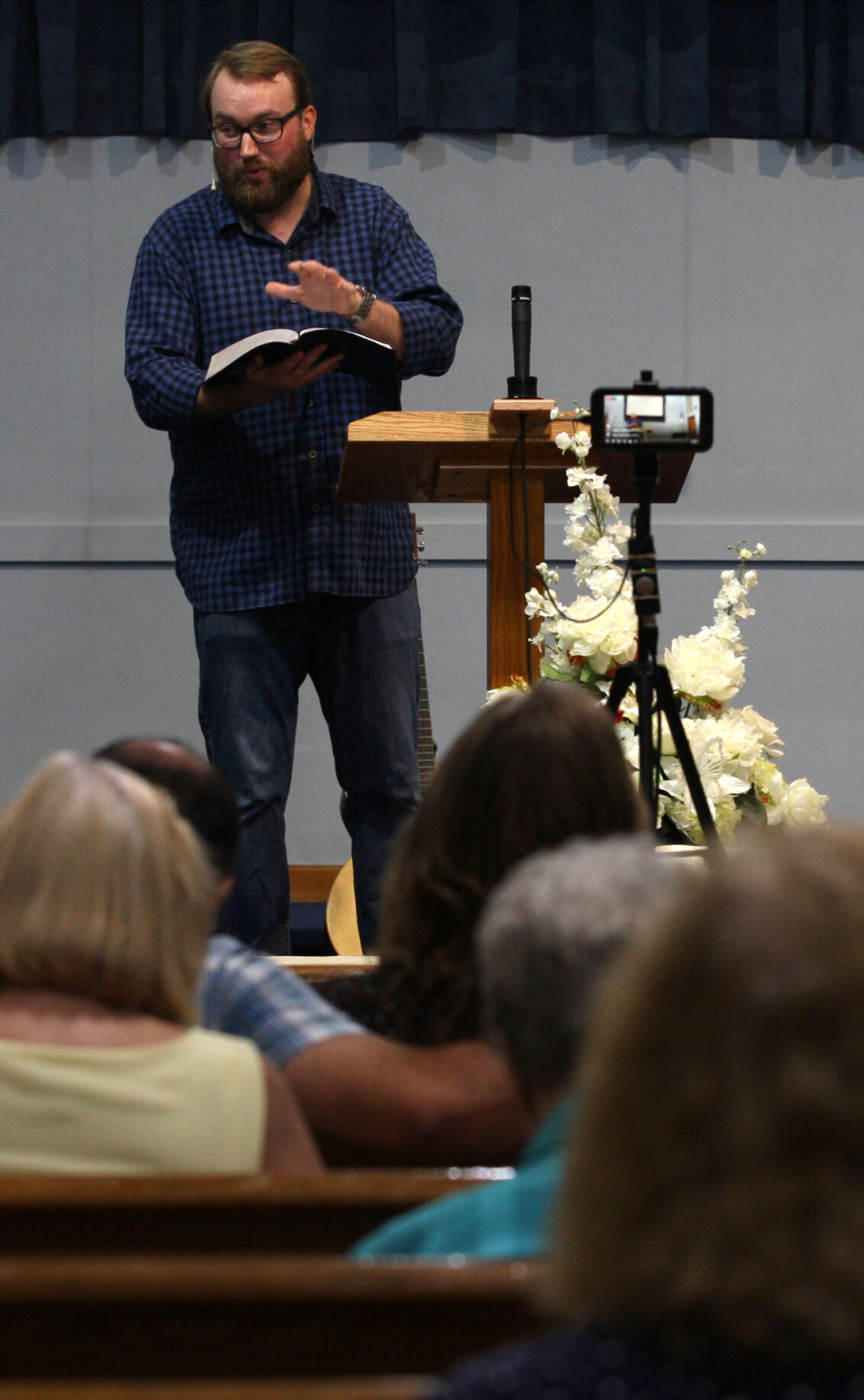 Pastor Tommy Schmitt holds out his Bible at the beginning of his sermon July 25 at First Baptist Church of Gray Summit. Although the church has returned to in-person services, they’re still recording videos of sermons for those who continue to watch online. 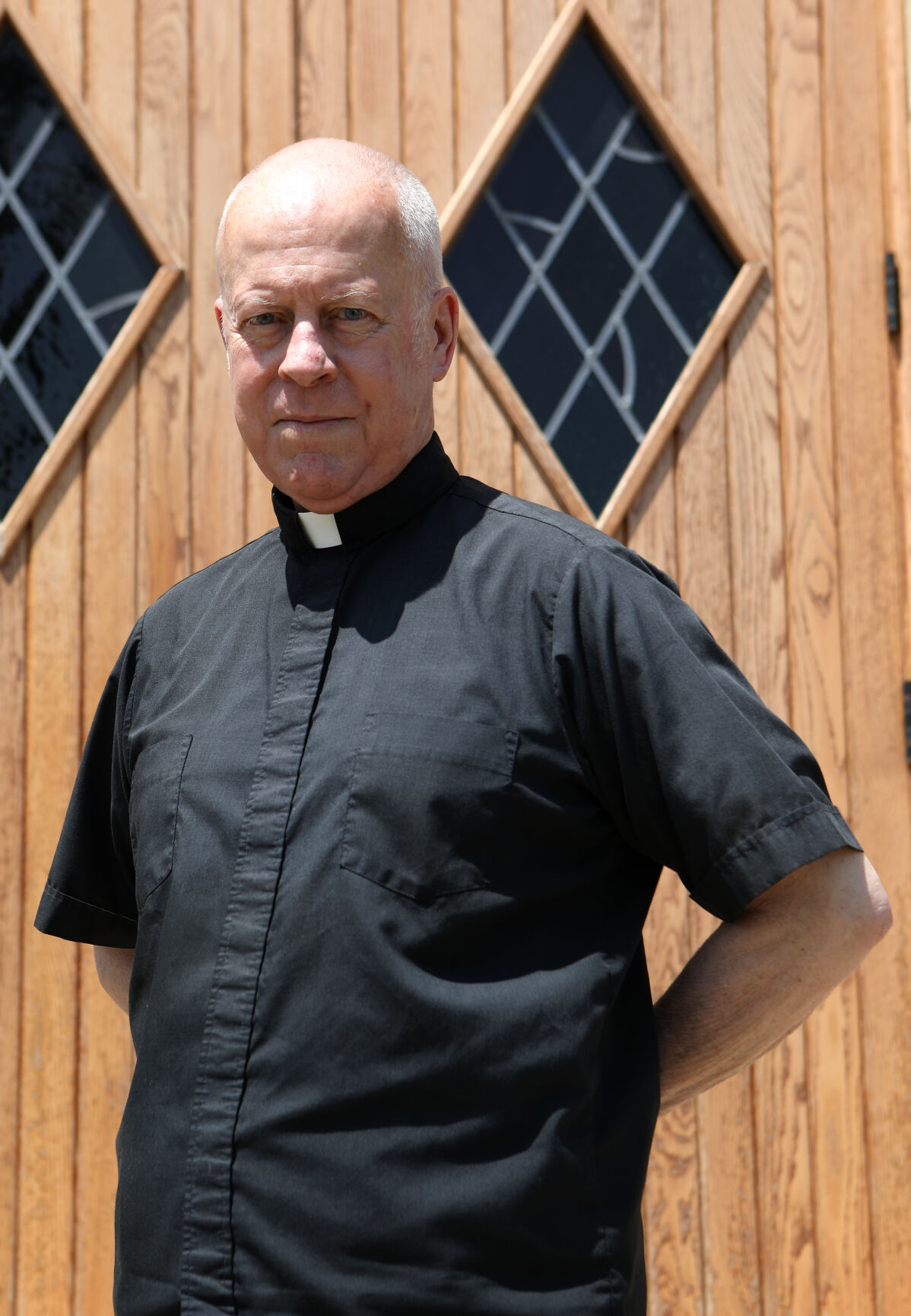 The Rev. John Deken stands before the doors of Assumption Catholic Church in New Haven July 26. 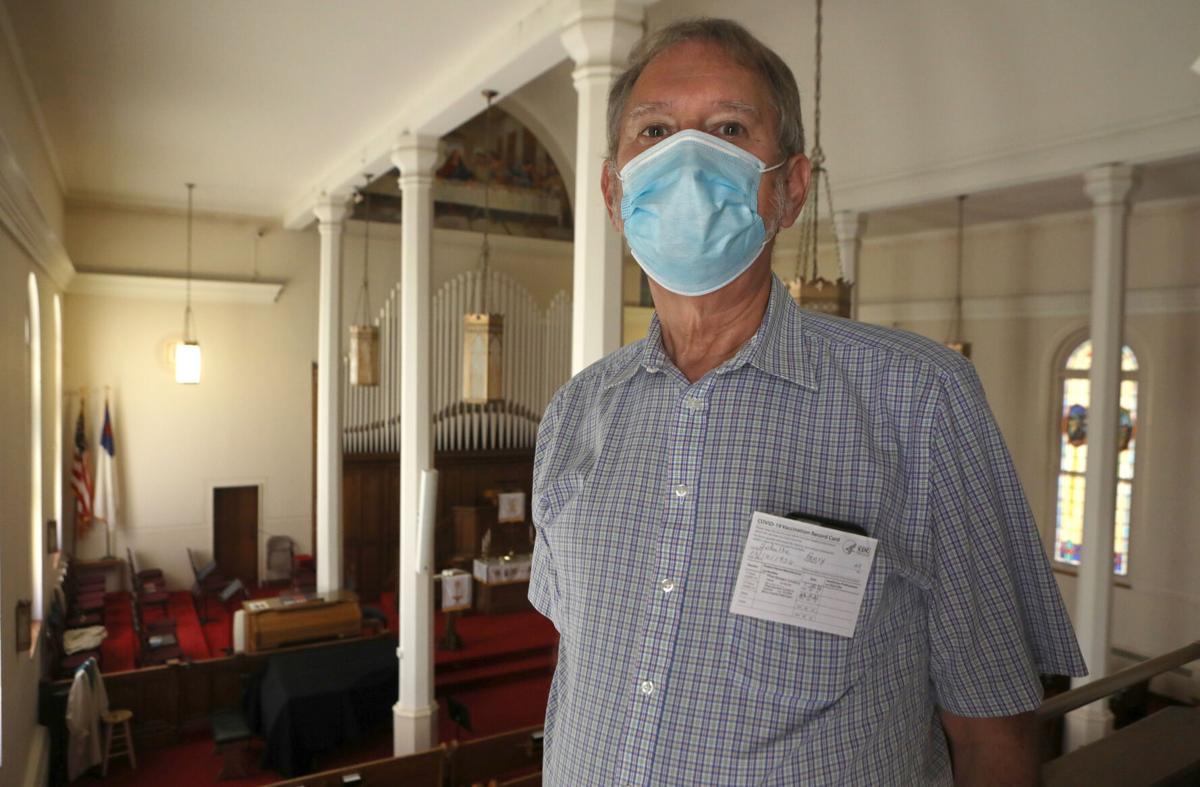 The Rev. Gary Schulte stands in the balcony of the sanctuary at St. Peter’s United Church of Christ July 25 in Washington. St. Peter’s continues to meet in person but has returned to wearing masks inside the building.

Pastor Tommy Schmitt holds out his Bible at the beginning of his sermon July 25 at First Baptist Church of Gray Summit. Although the church has returned to in-person services, they’re still recording videos of sermons for those who continue to watch online.

The Rev. John Deken stands before the doors of Assumption Catholic Church in New Haven July 26.

The Rev. Gary Schulte stands in the balcony of the sanctuary at St. Peter’s United Church of Christ July 25 in Washington. St. Peter’s continues to meet in person but has returned to wearing masks inside the building.

Livestreamed services became more prevalent as churches sought to adapt to a world changed by COVID-19, and they remain popular even after many churches have reopened their doors and are beginning to see more people in the pews on Sundays.

First Baptist Church of Gray Summit began streaming services through Facebook Live during the initial “flatten the curve” shutdown in the spring of 2020.

Tommy Schmitt, pastor at the church, credits those streams in part for growing the church’s live attendance numbers in recent weeks. The church experienced a second shutdown of in-person services in December, but since reopening in January, it has gradually built live attendance levels to new highs.

Now that the church has become accustomed to livestreaming services, Schmitt expects to expand on that option moving forward.

“That was something that was not on our radar before the pandemic,” he said. “We knew of churches that did livestream, but in my mind, I thought that was a bit of a big church thing, a megachurch thing, with cameras and all of this stuff. The pandemic showed that a church our size could do that and have pretty good success in it. Now, we’re looking at improving our ministry in that realm, not by gadgets and gimmicks but by doing it as excellently as we can because there are folks that are widowed and folks that are older and in living facilities that rely on that livestream.”

“I think it’s a really good thing that churches have had to go online because that’s the wave of the future across the country,” she said. She echoed what another pastor had said about the popularity of on-demand services in other industries like television streaming and online shopping. “Now, you can shop 24/7, he was saying, so why would we expect millions of people to have to keep one hour on Sunday available?”

“It was difficult,” she said. “Usually, when you come to a new church, you get together with people and either have a listening session at people’s homes or have small groups of people get together so the pastor can meet them and hear what they have to say — their visions and their hopes and dreams for the church. We weren’t able to do that. We couldn’t go to see anybody that was in the hospital or nursing home. We had a lot of people watch the livestream that couldn’t get to church, so I didn’t get to meet them, either.”

She said her church remains careful, but the dip in attendance was not that noticeable during the pandemic because it is already a small congregation. She said in-person attendance was close to its weekly pre-COVID average, with summer weather playing a role in people getting out more.

Other churches in the area are still seeing between 60 and 65 percent of their pre-COVID-19 congregations, but those members who are coming are grateful to worship in person once again.

Deken said in the early days of the pandemic, his parishes directed its members — around 280 households in New Haven and around 75 households in Berger — to livestreams and webcasts from other Catholic churches that had more resources to offer online services.

Schofield-Dolle and the Rev. Gary Schulte, head pastor of St. Peter’s United Church of Christ in Washington, both reported changes in the way their churches provide communion services.

Instead of calling forth in-person parishioners to receive communion, packets of wafers are distributed for communion to be taken while parishioners remain in their socially distanced seats.

“We have these little prepackaged communion things that are kind of like smaller versions of McDonald’s,” Schulte said. “They’re kind of hard for some people to get them open, and you have to peel one layer off and then the other layer off.”

Schofield-Dolle said she encouraged people watching services online to take communion with whatever they had available, such as toast, cookies, a banana, juice or beer.

Churches also needed to change from the practice of passing a collection plate, instead leaving a box or plates by the door for people to make their offerings as they enter or leave or accepting tithes online.

Another big change for Schulte has been the need to avoid physical contact with parishioners in order to follow social-distancing protocols.

“What I have missed a lot is visiting with people at the door,” he said. “I’m like a magnet. If I’m at the door, they’ll want to shake hands, and then you go from person to person to person. Pre-COVID, I never thought of that too much. I’m not a germophobe, but I certainly think about the responsibility that I have when it comes to ‘Hi, how you doin’?’ over and over again and just exchanging handshakes with everybody down the line.”

St. Peter’s, a nearly two-century-old institution in downtown Washington, was one of the last churches in the community to resume offering in-person worship, doing so in April 2021, and has since seen fewer people attending than it did at its prepandemic services.

Adapting to new circumstances is nothing new for churches, Schulte said, noting the church was returning to the old methods of worship while also continuing to serve people who began attending online services from outside the area, including one in Wright City and others in Florida and Texas.

“Churches are survivors, too,” Schulte said. “This church has been here 175 years. They might not have seen anything quite like this, but the Spanish Flu, the Great Depression — large and small churches have a way of surviving.”

Schmitt said the whole experience has shown how there is more to the church than its grounds.

“Many of our events (that) we used to do by inviting people to our building we had to turn into ways that we left our building and gave food to people out in the community,” he said. “Instead of ‘Come onto our property, and we’ll feed you,’ we had to go out and serve our community. I think that shined a light on what it means to be the church and what it means to get off of our property and love our community. I think there’s a real sense of hopefulness and optimism in doing that.”

In the U.S., the COVID challenge for places of worship comes against a backdrop of a decadeslong trend of fewer people identifying as religious.

It’s too early to know the full impact of the pandemic, though surveys and attendance numbers from local congregations show signs of hope  — and cause for concern.

About three-quarters of Americans who attended religious services in person at least monthly before the pandemic say they are likely to do so again in the next few weeks, according to a recent AP-NORC poll. More than 25 percent of previous churchgoers said they have no plans to return to their church in the next few weeks or months.

This is a change from May 2020, when about two-thirds of respondents said that they would return if they were allowed to do so. But 7 percent said they definitely won’t be attending.

Those findings are in line with a Pew Research Center survey of U.S. residents last summer. It found that 92 percent of people who regularly attend religious services expected to continue at the same or higher rate, and 7 percent said they will attend in-person services less often.

According to Nashville, Tennessee-based LifeWay Research, an evangelical research firm, many churches lost steam when in-person services shut down. A small but concerning number of churchgoers are coming out of the pandemic in limbo without a church home, LifeWay’s Executive Director Scott McConnell told The Associated Press.

“That’s a lot of momentum to lose and a lot of people stepping out of the habit” of weekly worship, McConnell said.

McConnell’s comments echo a new Gallup analysis highlighted by The Christian Post earlier this year, showing a marked shift away from formal church memberships. The data showed that for the first time in nearly 80 years, fewer than half of Americans maintain formal membership in a specific house of worship.

Those churches that are successful in reemerging from the COVID-19 lockdowns will likely be those that did a better job adapting to the pandemic, according to church officials. Eight in 10 congregants in the U.S. reported that their services were being streamed online, according to Pew.