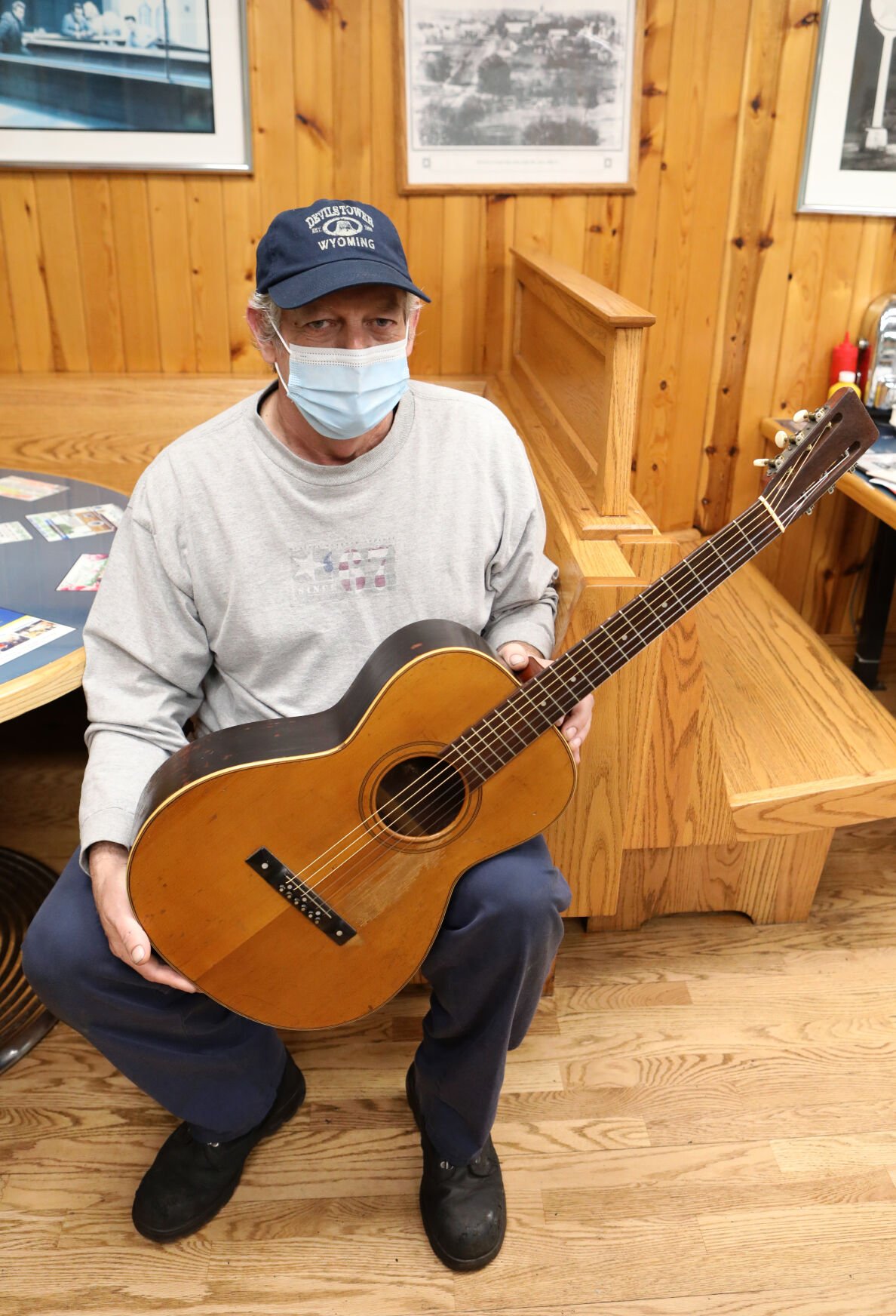 Matt Snodgrass poses with his Schwarzer guitar at the White Rose Cafe in Union Friday, Nov. 20. 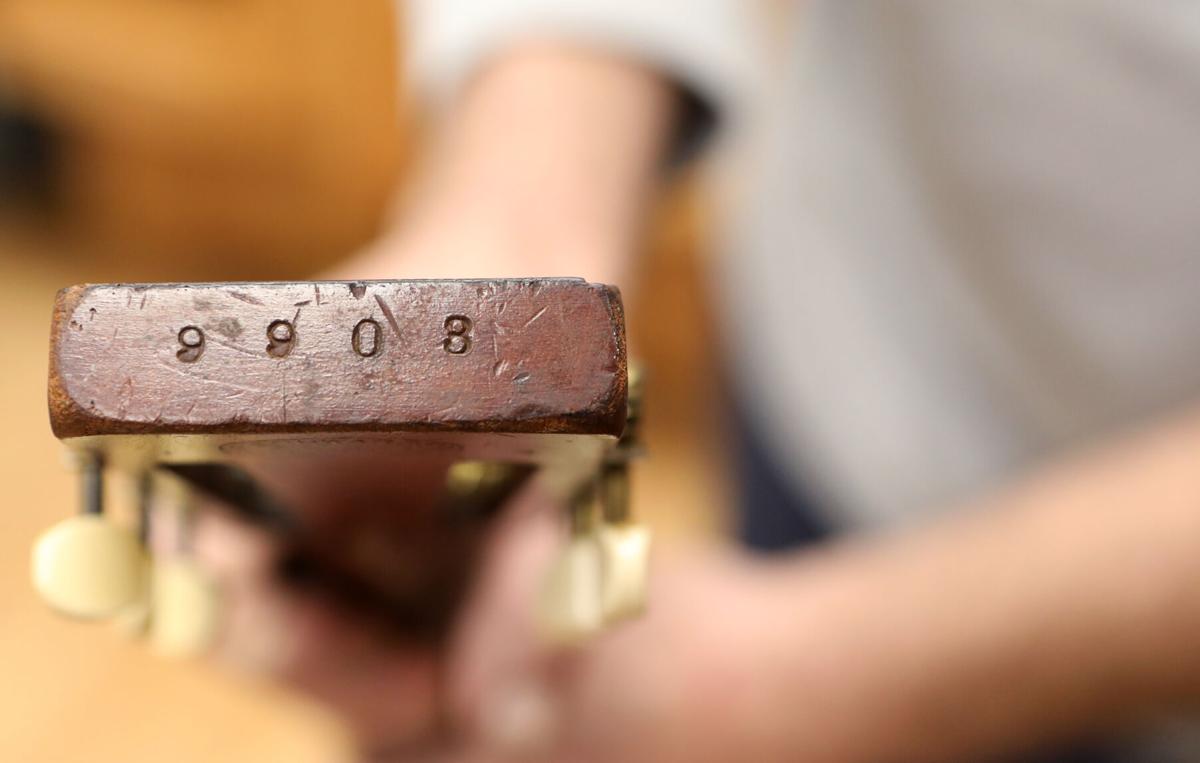 Pictured is the serial number of Matt Snodgrass' Schwarzer guitar. 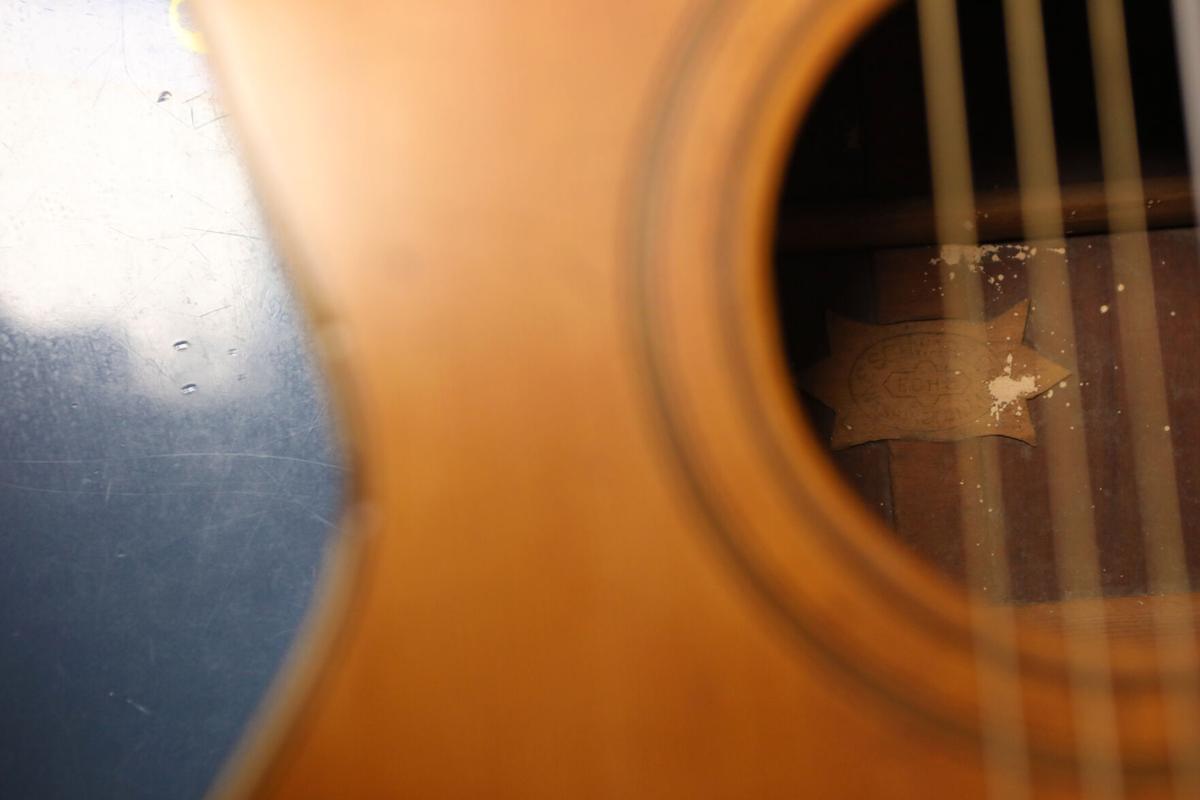 Pictured is Matt Snodgrass' Schwarzer guitar with a stamp of authentication inside the instrument. 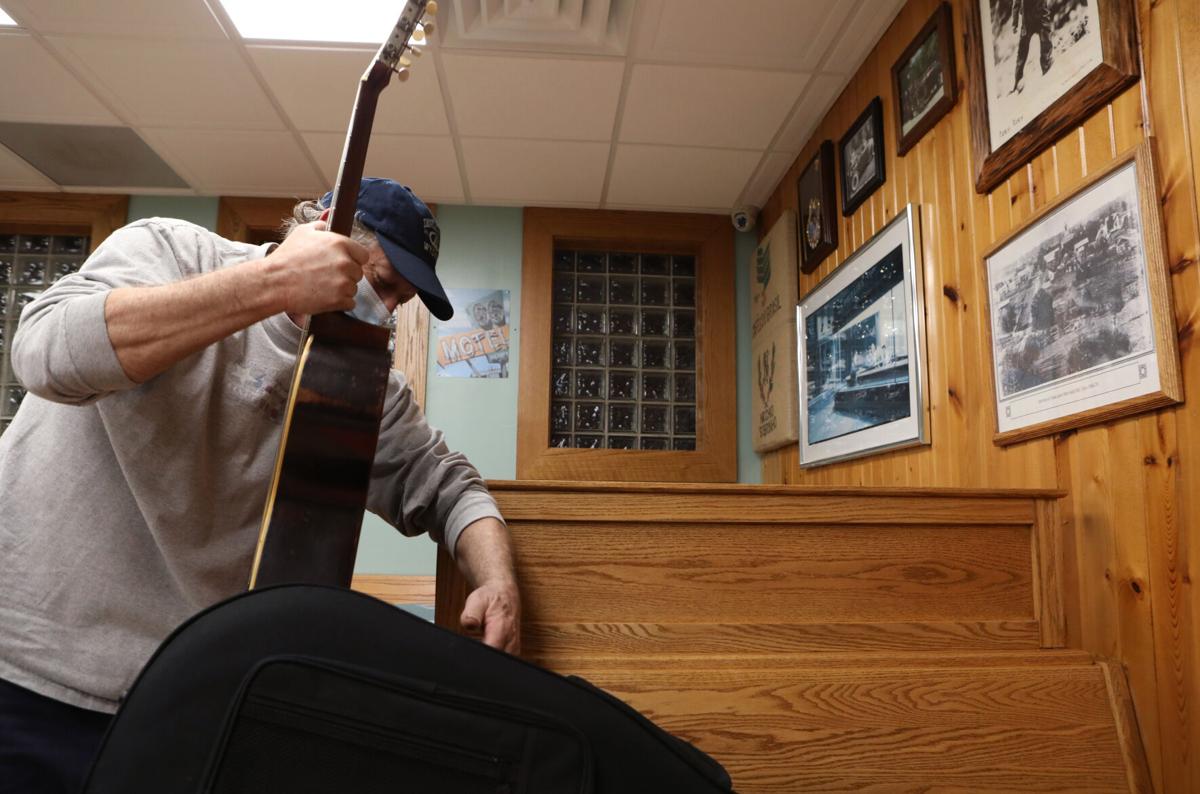 Matt Snodgrass packs away his Schwarzer guitar at the White Rose Cafe in Union Friday, Nov. 20.

Matt Snodgrass poses with his Schwarzer guitar at the White Rose Cafe in Union Friday, Nov. 20.

Pictured is the serial number of Matt Snodgrass' Schwarzer guitar.

Pictured is Matt Snodgrass' Schwarzer guitar with a stamp of authentication inside the instrument.

Matt Snodgrass packs away his Schwarzer guitar at the White Rose Cafe in Union Friday, Nov. 20.

On Nov. 10, 1911, Schwarzer Instruments, a Washington factory that crafted and sold mostly zithers but also some other instruments, sold a model 702 mahogany guitar to the Althmueller brothers. A small wooden stamp inside the guitar guarded the piece’s serial number, which also was carved into its head: 9903.

Where the guitar went after will probably never be known. It changed hands at least once, likely more, being plucked and played over the years until it came to rest in an outdoor shed in an area home, a neglected novelty item. For a time, the only thing to touch the instrument was a steadily building layer of dust.

Until 109 years later, on Oct. 29, 2020, when Matt Snodgrass purchased the instrument at an estate auction. A guitar enthusiast from Union, Snodgrass saw a photo of the guitar on the auctioneer’s website and thought it might be a vintage children’s guitar — or possibly a Washburn or a Lyon & Healy.

“What drew me to it was it was not normal,” he said. “At first it was unremarkable because I only saw one picture. (My wife) said you ought to look at that old guitar again. So I went back and there were four pictures. And it intrigued me.”

He’d also been looking for a classical guitar to add to his collection and thought this might work.

Although he couldn’t place the manufacturer, he sensed an opportunity and decided he would not be outbid.

The lot consisted of the guitar and a Casio electric keyboard. Bidding started at $2, and Snodgrass submitted his first bid at $10. Over the next few days, the price topped $100, and Snodgrass was still bidding. He did not disclose how much his final offer was for, but he did eventually win the lot.

Snodgrass arrived to pick up the items on a rainy day, realizing at once that he’d stumbled upon a special piece.

“As soon as I touched it, I knew it was no kid’s guitar,” Snodgrass said. “It’s more exciting to find something like this.”

A Trip to the Archives

Snodgrass’ next move after cleaning the instrument, was to see what information he could find on its maker or serial number. The maker would be easiest; the name Franz Schwarzer is known to almost everyone from Washington because of the former instrument factory. After immigrating from Austria to New York in 1864, Schwarzer bought a plot of land in Washington and started building his home and operation in 1866 or 67. By 1888 more than 3,000 Schwarzer zithers had been sold worldwide, and each instrument sold for $19 to nearly $1,000.

At the Washington Historical Society, Director Marc Houseman showed Snodgrass a copy of Schwarzer’s official ledger of sales, which is housed at the State Historical Society in Columbia. From 1885 to 1951, the factory produced more than 11,000 instruments, primarily 4,759 concert zithers, according to its record of sales. The factory went out of business in 1956 and was torn down.

Remnants of Schwarzer remain hidden in plain sight in other parts of Washington. He made an altar for St. Francis Borgia Church, and his two-story, brick home along the railroad tracks at Walnut and Locust streets has been listed on the National Register of Historic Places since 1978.

Snodgrass’ answer lay not in any of that, but in a smaller entry about 10 slots down on the sales record, reading “Guitars … 159.” He remembers thinking that he didn’t even know Schwarzer made guitars.

According to him, not many people do. It’s not known where most of the 159 Schwarzer guitars produced are, or whether they survive. A more battered instrument belongs to the Washington Historical Society collection. Houseman also personally owns one, which his wife purchased at an auction for $20.

“It looked like some hard rock group had smashed it on stage,” Houseman laughed. It cost almost $600 to repair the instrument. One also turned up in a California vintage shop in 2014, which Snodgrass found online.

But they are far more infrequent than finding a Schwarzer zither. Snodgrass doesn’t know how it came to be in the possession of the previous owner, whose name he did not disclose.

After he’d cleaned and tuned it, the first song Snodgrass played was “Wildwood Flower.”

As far as he can tell, the only piece of the entire instrument that has been replaced is one side of tuning keys. There is a small crack in the backside wood, which Snodgrass says will be easy to repair, and other small signs of wear. If he tilts his head just right, the light will illuminate small dents in the fretboard, put there by fingers pressing the strings down to play.

“It’s survived remarkably well,” Snodgrass said. “It would have been in a wooden case at the time, so just the bouncing around (in the case) wears it.”

He quickly bought a fabric, cushioned case for the piece, and swapped out the steel strings for nylon, which he says do less damage to vintage guitars. Other than such tiny markings, the guitar is in mint condition.

While researching his new collector’s item at the historical society, Snodgrass watched a DVD the museum made celebrating the legacy of Schwarzer in Washington. Near the end of the film, Snodgrass saw a familiar face speaking about the famed instrument manufacturer — local genealogist and his late grandmother-in-law, Elsie Webb.

If she could see one of Schwarzer’s guitars in the hands of her grandson-in-law, “Grandma Webb would be jumping up and down for joy,” Snodgrass said.

Even though Snodgrass can’t share his music with the generations above him, he loves the days where he can sit on the floor of his home holding down the strings while his two granddaughters, Kinsley, 5, and Blakely, 3, strum the strings with their tiny fingers.

“They see those guitars and it’s, ‘Can I play? Can I play?’ ” Snodgrass laughed. “Now every time they come over I have to have two guitars on the floor they can play with.”

He hopes the music will help them improve their math and science skills, but he mostly enjoys the memories made with them.

Snodgrass also has given away instruments to his nieces and nephews.

Nine remain in his collection, adorning the wall in his spare bedroom-turned-office, each with a special story behind it. The 1989 Takamine, for example, is the guitar he’s owned the longest and has been with him for more than 30 years.

But none of his pieces have the local history attached that the Schwarzer instrument does.

“I want to share with people here. This is a part of their history,” he said. “This was made top quality — the fact that it’s here today is a testament to that quality.”

Snodgrass said he would be open to selling the piece if he found a conservator who he trusted to take care of it, but he didn’t buy it to make a profit.

“The story isn’t, ‘I got a great deal on something,’ ” Snodgrass said. “The story is, ‘I found a piece of Washington history.’ ”