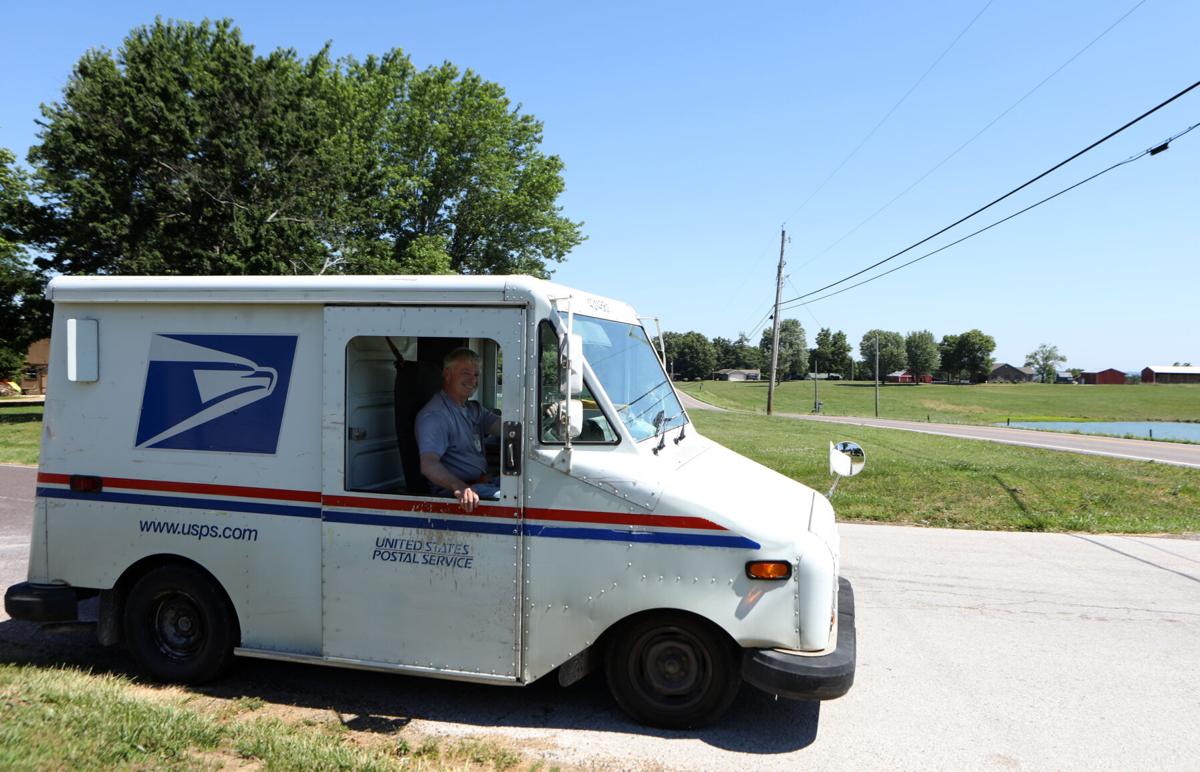 Kevin Knight drives his mail truck along his route June 23 near Krakow. 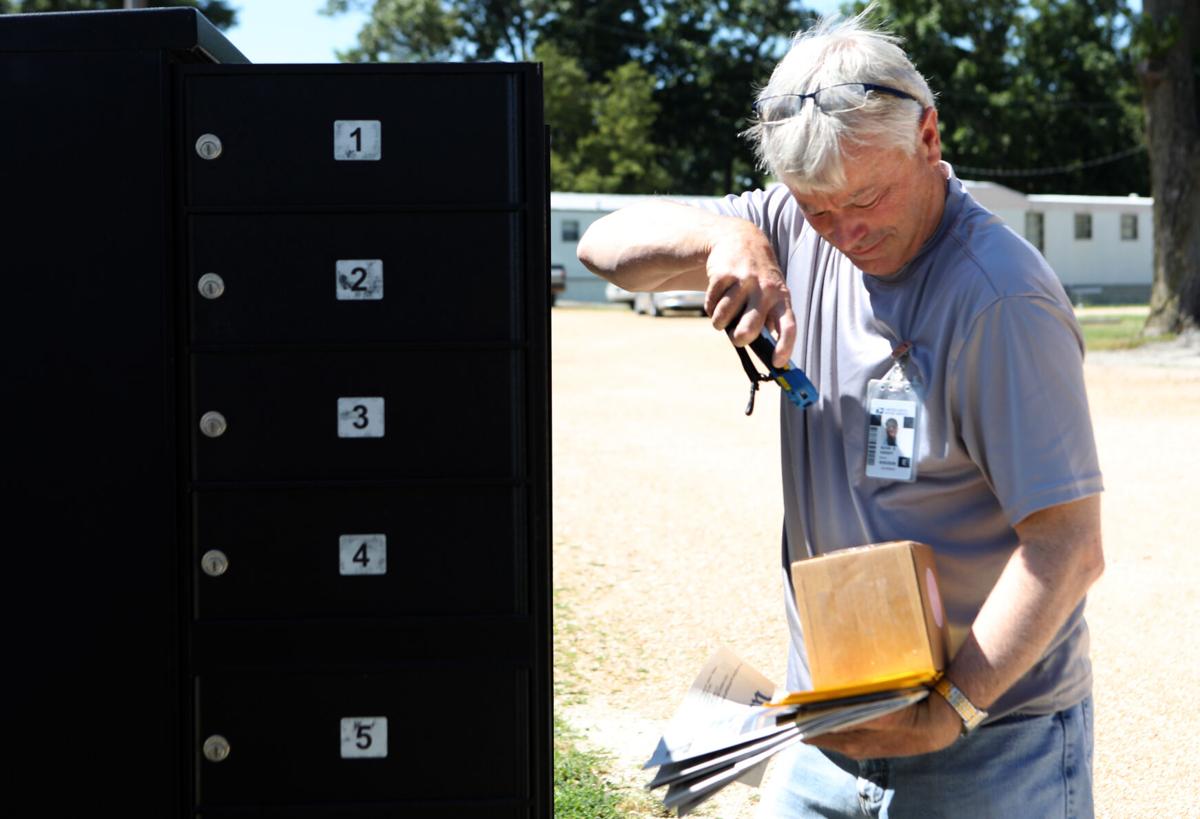 Kevin Knight scans mail before placing it in a mailbox along his route near Highway YY June 23 in Krakow.

Kevin Knight drives his mail truck along his route June 23 near Krakow.

Kevin Knight scans mail before placing it in a mailbox along his route near Highway YY June 23 in Krakow.

As a longtime mail carrier for the U.S. Postal Service, Kevin Knight and his mail delivery truck are what you might call age-old friends.

Knight, who will be 56 at the end of June, has been a rural carrier in Washington for nearly 37 years, and he’s been driving the same mail truck — the classic box-shaped Long Life Vehicle, or LLV — since 1996. That’s right, the very same truck for 25 years.

On his daily route, which runs primarily through the communities of Krakow and Clover Bottom, Knight said he typically travels 65 to 70 miles each day, including 5 to 10 miles of travel up and down rural driveways when he’s delivering parcels too big to fit inside customers’ curbside mailboxes.

The odometer on Knight’s LLV has been changed out three times, and, to date, he figures the truck has “well over half a million miles on it.”

Indeed, last fall, Knight earned the Million Mile Award, which honors mail carriers who have avoided any sort of preventable roadway accident either over the course of 30 years or once they have accumulated 1 million miles of driving on the job. Knight has managed to accomplish both.

Most mail carriers never accumulate the 1 million miles or the 30 years required to be eligible for the Million Mile Award. Still, many distinguish themselves under the radar through their decades of service. Among them are rural carrier Lorrie Smith, 60, who has been delivering mail for 25 years, and city carrier Kyle Banderman, 46, who has served as a mail carrier for nearly 21 years.

“It was humbling to get the award,” Knight said. “I’ve been fortunate, really, because there are a lot of things that could go wrong out there. And not every accident is the carrier’s fault, so it takes a little extra caution. ... I was proud to get the award.”

A mail carrier’s day starts bright and early. At the Washington post office, carriers are expected to arrive by 7:30 a.m., Smith said, though many arrive earlier to get a jump on the day. Smith usually gets in before 6:45 a.m. and Knight by 7 a.m.

A big portion of a carrier’s morning is spent preparing the day’s mail for delivery. Most standard-size letters are presorted and put into delivery sequence via an automated machine in St. Louis before arriving at the Washington post office. However, when it comes to larger pieces, such as magazines and catalogs — “flats,” as postal workers call them — mail carriers at the Washington branch must sort by hand. Then they combine the sorted flats with each customer’s letters before putting the individual bundles into trays, organized sequentially by address, and loading them into the truck.

Then, too, there are the parcels — dozens of them — to be loaded into the mail truck and organized in improvised fashion each day, so individual packages can be easily found again as carriers move along their routes.

A major challenge for mail carriers in recent years has been the growing volume of parcel packages. Knight said parcel deliveries on his route have been “steadily gaining over the last five or 10 years.” Banderman summed it up, saying, “It’s like Christmas every day now.”

Knight, Smith and Banderman all point to the ever-growing popularity of online shopping as a major reason for the increase in parcels. They also said the onset of the COVID-19 pandemic made online shopping more popular than ever.

“People who had never shopped online in their life were afraid to go to the store,” Knight said. So they turned to online shopping, he said, adding that those people “are going to continue to shop online because they found out how convenient it is.”

The task of delivering more parcels has inevitably made for longer workdays, sometimes by as much as an hour or two or more, Smith and Knight said.

“I’m delivering in a rural area,” Knight said, “and a lot of these houses have a half-mile-long driveway. ... It can easily take five to ten minutes to deliver one parcel. If it takes five minutes, and you’ve got ten parcels, pretty soon, you’ve got almost an hour there. It can add up really quickly.”

Smith will never forget the time she delivered a winch, a mechanical device used to adjust a rope, to a customer’s home. She could barely get the hefty parcel out of the truck, much less up to the house; ultimately, she left it at the end of the customer’s driveway. Later that evening, with a little online research, Smith discovered the winch weighed 160 pounds, well over the Postal Service’s limit of 70 pounds. Still, she later apologized to her customer. “I said, ‘I’m sorry. This is as far as I could get the box.’ ”

Storms and fire — all in a day’s work

As longtime postal employees, Smith, Knight and Banderman have endured all kinds of inclement weather, yet for the most part, they’ve taken it in stride.

“Over the years, I’ve never the let the weather bother me,” Smith said. “You cannot change it. ... And I loved the snow back in the day. I’d say, ‘I can’t believe they’re paying me to deliver mail in the snow. I get to play in the snow today!’ ”

Banderman said that sometimes “the weather can get a little tricky, especially in the summer. There’s no air-conditioning in our LLVs, so I always joke that it’s like driving an Easy-Bake Oven on wheels.”

He recalls a day when he was out on his route and tornado sirens started going off. He headed to Mercy Hospital Washington, where he took shelter under a loading dock until the storm passed. “But other than that,” he said, “there hasn’t been anything too crazy.”

As for Knight, he vividly remembers a particular summer day back in 2002. It was July 10, his wife’s birthday, and he planned to take her out for dinner that night. During the day, though, a severe thunderstorm broke out. As Knight made his way along Whiskey Creek Road, he saw smoke in the distance. He headed toward it through hammering rain and soon realized that a customer’s house was on fire; lightning had struck the propane gas line leading into the house. After asking a nearby neighbor to call 911, Knight shut off his customer’s propane tank, then grabbed a garden hose. By the time the fire department arrived, he had extinguished the fire.

“To this day, they (the owners of the house) call me their guardian angel,” Knight said. “I just happened to be there at the right time. It was just one of those things.”

As for the birthday dinner Knight had planned, he recalls that his wife was a “little perturbed” for being kept waiting at home — until she found out why. “I got excused for being late that day,” he said, chuckling.

The work of a mail carrier is physically demanding. “You’ve got to have stamina to do this job,” Smith said. Oftentimes, new hires don’t last long, she said. “A lot of them think we’re out there just driving around in the country, waving at people. But there’s so much more involved in it than that.”

The challenges of the job aside, Smith, Knight and Banderman say the most rewarding aspect of the job centers around their customers, the people.

“You build relationships with your customers,” Banderman said, “and it makes the day go by better. For some people ... you might be the only person they see the entire day. So it makes you feel good to kind of brighten up their day. That’s my favorite part of it really.”

As for Smith, she plans to retire in October but admits the transition might be tough at first.

“I enjoy seeing my customers,” she said. “It gives me great joy when a customer is happy that a box arrived or that they got their check in the mail.”

She has a particular soft spot for the kids on her route.

“You watch them go to elementary school, and then you see them graduate high school and go on to college, almost like your own children,” she said. “It’s fun watching them grow. ... So those things I’m going to miss immensely when I retire.”

Knight, who has been delivering the mail for nearly 37 years, said his customers also have been wonderful, and he’s proud to have done this work for as long as he has.

“It might sound corny, but part of why I stay is because I feel I’m doing a service that is needed,” he said. “It’s been an honor really for me to do this all these years.”

The U.S. Postal Service as we know it today wasn’t officially created until 1970. Before that, the nation’s postal system was known as the Post Office Department and operated at the cabinet level within the government.

Plans to commemorate the 50th anniversary of the Postal Service include interviews with employees who have been with the postal service since July 1, 1971. To view those interviews online in July, go to about.usps.com/who-we-are/postal-history/ and select “Postal People” from the drop-down menu on the left.