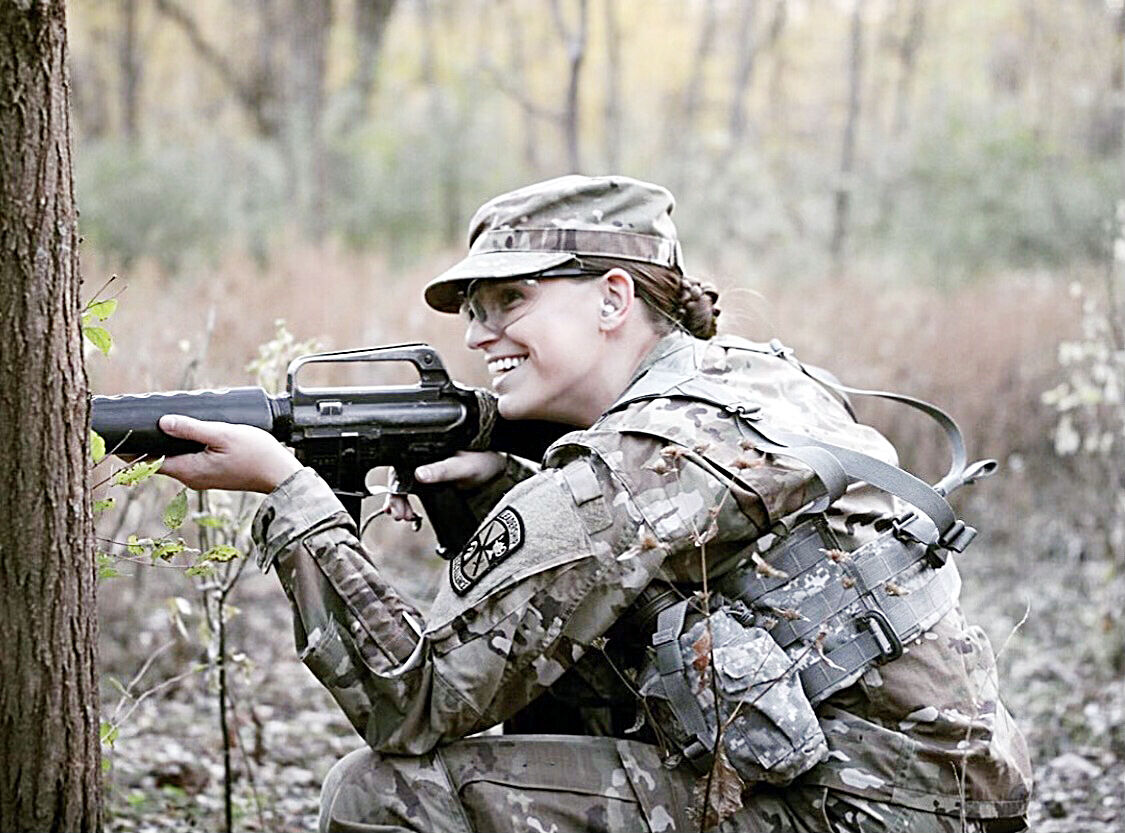 Washington High School alum Paige Hall during a training drill for ROTC at the Southern Illinois University-Edwardsville campus. Hall is entering her third year as an Army ROTC cadet and hopes to be an active duty officer and a pharmacist. 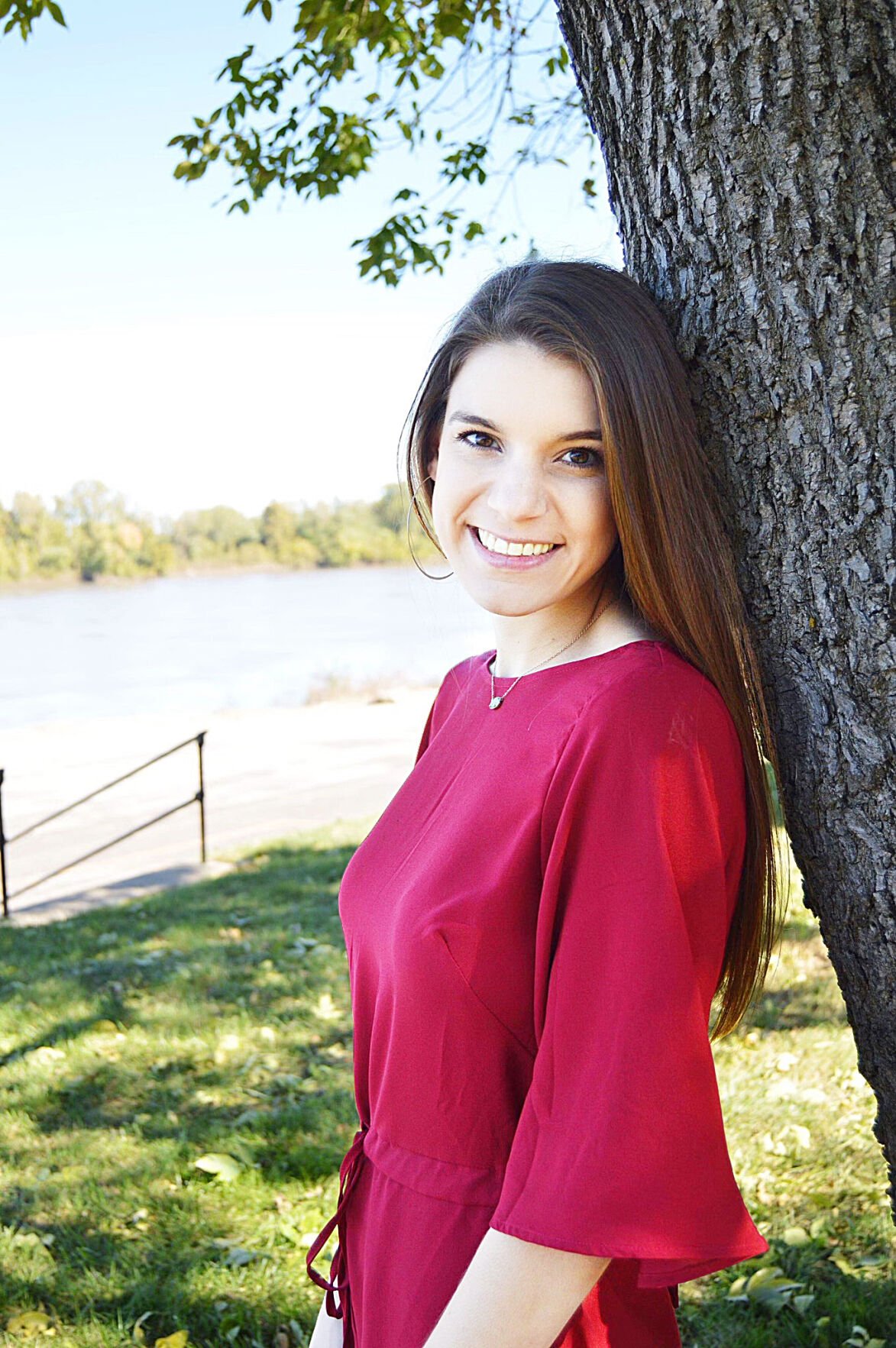 Paige Hall has been interested in pharmacy from the time she was little, but she only became interested in the military during her freshman year of college. She hopes to serve as an active duty officer after she completes her pharmacy degree.

Washington High School alum Paige Hall during a training drill for ROTC at the Southern Illinois University-Edwardsville campus. Hall is entering her third year as an Army ROTC cadet and hopes to be an active duty officer and a pharmacist.

Paige Hall has been interested in pharmacy from the time she was little, but she only became interested in the military during her freshman year of college. She hopes to serve as an active duty officer after she completes her pharmacy degree.

For Washington High School alumna Paige Hall, the road to success has often been more like an obstacle course than a straight sprint. Not unlike the drills she completes every weekday as an ROTC cadet at Southern Illinois University-Edwardsville (SIUE), Hall’s path requires determination and diligence.

An incoming junior studying pharmacy at SIUE, Hall, has harbored dreams of being in the medical field her whole life. That dream has in recent years been joined by a second — to be an active duty member of the U.S. Army.

“It can be frustrating, but you really just have to try your best, and people are going to appreciate that you’re trying and want to help you get better,” she said.

Hall was diagnosed at 3 years old with severe hearing loss. Most people meeting her would never know she is hard of hearing since Hall has been using hearing aids since childhood and relies heavily on them, as well as on reading lips.

“When I was growing up, my parents raised me to not use my hearing as a crutch,” she said. “It’s really helped me get where I am today.”

A challenge to rise to

Since she was a young girl, Hall was drawn to a career in the medical field. She spent time in high school shadowing her grandfather, who works as a pharmacist in Poplar Bluff, and often talked about the profession with her stepmother, who is a pharmacist at the Washington Walmart. She loved that both developed relationships with patients and took time to check in on them.

“I enjoyed that it wasn’t just sitting behind a desk all day,” she said. “You’re actually interacting with patients and communicating with other physicians to work out what will be best for the patient.”

Hall chose SIUE for its pharmacy program, whose students had the 19th-highest pass rate of the licensing board exams in the nation. Students join the four-year program after two years of prerequisites, earning their degree and professional certification in six years.

After arriving on campus, Hall attended an activities fair and passed by the ROTC program table by chance.

“I thought, ‘I’ll give it a shot,’ not thinking I would like it at all,” Hall said. “The people are amazing. I can ask them for anything, and they’re not going to judge me. They’re here to help (one another) get better.”

Michael Porch, scholarship and enrollment officer at the SIUE Army ROTC, said activity tables like these are where many of the cadets come from, several of them without knowing what ROTC is. However, he said their previous exposure doesn’t guarantee their success or failure, with Hall being a good example.

“She took to the program quite well and has pushed herself physically and academically,” Porch told The Missourian. “She found a challenge she wanted to rise to and a way to help pay for some of her school.”

Like many other ROTC cadets — though not all — Hall’s participation in the program has earned her a nearly full-ride scholarship at school, which for the pharmacy program costs around $14,000 per semester for tuition alone.

At the time she joined, she was the only woman in her class, although a few others have joined since.

Women were banned from joining ROTC programs until 1970, and today they make up 20 to 30 percent of the 20,000 ROTC cadets, according to the Army. June 12, the anniversary of the signing of the Women’s Armed Services Integration Act, is celebrated in the U.S. as Women Veterans Day to honor women military members and ROTC cadets, including Hall.

Hall encouraged any one who might be interested, especially women, to give ROTC a try for a semester or even a class, a suggestion Porch echoed.

“It’s an opportunity, and it doesn’t hurt to give it a try and see if it fits with where you’re going,” Porch said.

Hall’s days usually begin around 5 a.m., when she gets ready for battalion training at 6 a.m., and end anywhere from 10 p.m. to midnight or later, depending on how much studying she has to do for her classes. However, Hall said the schedule doesn’t deter her, as completing her pharmacy degree has recently become even more important to her. She explained that with her hearing loss, having medical training could provide a huge advantage to her in trying to earn a place as an active duty service member. If she gets the commission, she will finish her pharmacy degree and then likely be sent to work as a pharmacist at a U.S. or international Army hospital.

“Sure, I can still communicate well, but I’m pretty nervous I won’t get in with my hearing loss,” she said. “That’s something I’d have to get a big waiver for.”

When after two years of classes Hall was accepted to the pharmacy program, which she will begin this fall, she became the only student in the school’s 26-year ROTC history to attempt to balance both. She also will have a leadership role helping new ROTC recruits navigate the program, where she hopes she will set an example for younger students that women can be successful leaders in all levels of the military.

She also hopes other students studying math- and science-related fields, maybe even a fellow pharmacy student or two, will be encouraged to join. “People think if you’re a STEM major, you can’t do ROTC, and I thought that, too, but you can do both,” she said. “ROTC has improved my leadership skills, my ability to communicate with other people and my discipline. Those are all things I need in a pharmacy. ... I’m going to stick with the Army as long as I can, until they tell me, ‘no.’ ”

The ROTC — or the Reserve Officers’ Training Corps of the U.S. Armed Forces — are high school- and college-level training programs for people aspiring to be officers in the U.S. military. The programs, which can be offered for Army, Navy, Marines and Air Force, are offered at around 1,700 universities across the U.S. according to the U.S. Department of Defense.

The program is open to any university student at participating schools who is a U.S. citizen between the ages of 17 and 26, graduated from high school with a GPA of at least 2.5 or passed a high school equivalency test and passed the Army physical fitness test, among other qualifications.