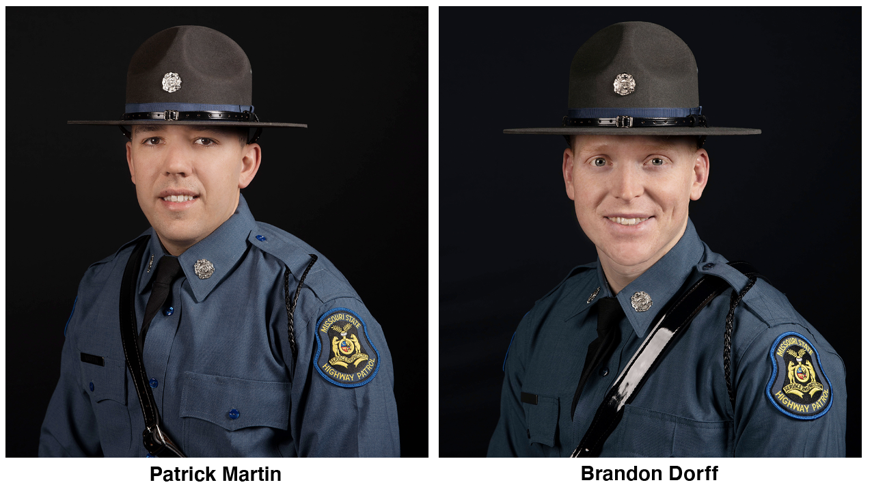 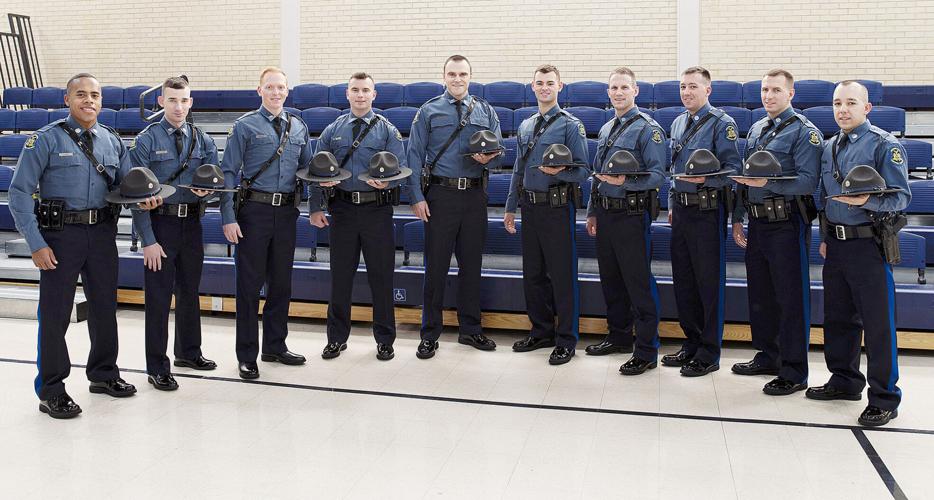 Brandon Dorff, third from left, and Patrick Martin, far right, are pictured alongside the other members of the Missouri Highway Patrol's Law Enforcement Academy. The two men have been assigned to serve and patrol in Troop C, which includes Franklin County. 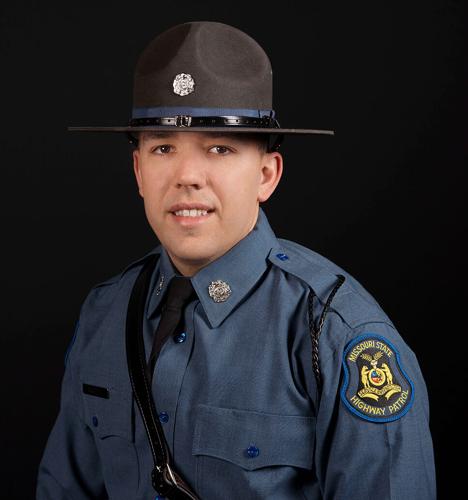 Patrick Martin, a recent graduate of the Missouri Highway Patrol's academy, has been assigned to serve and patrol in Franklin County. 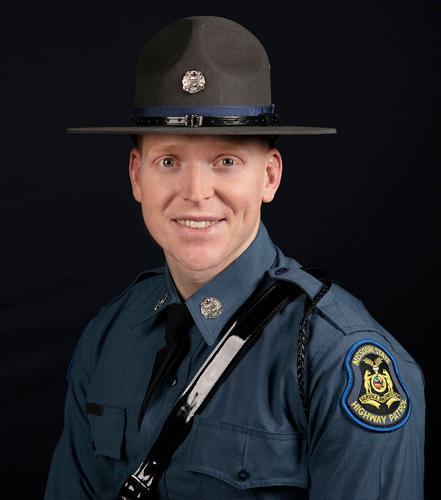 Brandon Dorff, a recent graduate of the Missouri Highway Patrol's academy, has been assigned to serve and patrol in Franklin County.

Brandon Dorff, third from left, and Patrick Martin, far right, are pictured alongside the other members of the Missouri Highway Patrol's Law Enforcement Academy. The two men have been assigned to serve and patrol in Troop C, which includes Franklin County.

There’s a new kid in town – make that two: Patrick Martin and Brandon Dorff, who recently joined the ranks of the Missouri State Highway Patrol. They have been assigned to Troop C, Zone 10, in Franklin County.

Martin, 27, and Dorff, 22, both had long aspired to become state highway troopers. In January they graduated, along with 23 other recruits, from the Patrol’s Law Enforcement Academy in Jefferson City.

“Ever since I was a kid, I wanted to go into law enforcement,” Martin said recently. He grew up in Jacksonville, Ill., and holds degrees in accounting and business administration. For several years he worked full time in the business world — all the while setting his sights on becoming a state trooper. “I always liked helping people, and I knew that a career in law enforcement would allow that.”

Dorff grew up in Dardenne Prairie and earned a degree in criminology, prior to applying to the MSHP academy. His inspiration for becoming a state trooper came largely from his parents, he said.

Dorff’s father is a U.S. Navy veteran. “He always would tell me stories of when he was in the Navy, how much he loved it and how much respect he got, while being a part of something bigger than himself,” Dorff said. “And my mom was the person who taught me that for every person you meet, you can change their life in some way.”

Pursuing a career in law enforcement, Dorff said, was “the perfect way” to combine those values. And, by becoming a state trooper, he would be a part of “the best of the best.”

The Path to Becoming a Trooper

Graduating from the highway patrol’s training academy is no small feat, nor is the initial task of being accepted into it.

From start to finish, the hiring process takes about six months, beginning with a written test focusing on skills such as writing and problem-solving.

The top-scoring applicants in the two initial tests go on to participate in more evaluations — everything from a polygraph test and a background investigation to an oral interview and a psychological evaluation.

The bigger challenge comes as new recruits at academy.

“In my opinion, the academy is a stress test – the entire time, you are under stress,” Martin said.“You find ways of coping and learning to deal with it.”

Dorff echoed Martin’s sentiment. “It’s very intense — physically demanding, mentally demanding, very stressful,” he said. “But they need to put you in an environment like that because that’s what this job (as a state trooper) often is.”

The training academy is located in Jefferson City, where the MSHP is headquartered. In order to become a Missouri state trooper, every recruit must successfully complete 1,200 hours — or approximately six months — of training, which includes passing an array of academic and physical-fitness tests along the way.

Recruits live in dormitory-style housing and are provided with uniforms and meals at the academy. The starting salary for recruits in training is approximately $53,500, according to Cpl. Dallas Thompson, Troop C public information officer.

Martin, Dorff and the other recruits in their class began training last August.

Dorff said a typical day at the academy began at 5 a.m. with physical training (P.T.), usually an hour of calisthenics. Afterward, recruits showered, changed into their uniforms and ate breakfast.

At 8 a.m., classroom instruction got underway.  Aspiring troopers learned arrest procedures, pursuit driving, first-responder skills, civil and criminal laws — and much more. On a typical day, Dorff said, recruits usually spent four hours in the classroom, followed by lunch, and more class time until about 5 p.m.  Then a second round of P.T. — running hills outside, for instance, or practicing defensive tactics — before dinner.

Bright and early the next day, the regimen would begin again.

When it came down to it, the most challenging aspect of training for Martin and Dorff wasn’t the physical or mental demands, but something more basic and essential: being away from home and the people they love.

On weekends, from Friday evening until Sunday evening, recruits are allowed time off, an opportunity to get away and visit with family and friends. That time could be fleeting. “Six months is a long time,” Martin said.

Shortly before heading off to the academy, Martin proposed to his girlfriend, Kayla. “I knew it was going to be a big turning point in our lives, and I thought it was a good time to ask,” he said.

At the time, the two were living in Jacksonville, where Martin had grown up and where his family still lives.

Dorff grew up in Dardenne Prairie but his parents and sisters live on the East Coast now; his parents are in Connecticut. “The distance from home, family, was the biggest hurdle I had to get over,” he said.

Despite the homesickness and the daily stress of the academy, Dorff and Martin said what they learned at the academy has been invaluable.

“If I could give one piece of advice to people wanting to do this job, it would be that when you get to the academy, you have to keep an open mind and understand that everything that happens there is done for a reason,” Dorff said. “You won’t necessarily understand it when you’re going through it, but the day you walk across that stage (at graduation) and leave the academy, you’ll look back on all those moments and think, oh, this makes sense now.”

The 112th recruit class to which Dorff and Martin belong graduated on Jan. 12. Of the 36 recruits who showed up last August for day one of training, 25 ultimately graduated.

Dorff’s parents had flown in for the ceremony, and friends from college were there, as well.

“I felt amazing that day,” Dorff said. “I was proud and felt a real sense of accomplishment. After I walked across that stage, I was eager to begin my journey as a state trooper and eager to spend time with my family, since I had been away  from them so long.”

As for Martin, a cadre of family members showed up to see him graduate – his parents and four siblings, his sibling’s spouses, his nieces and nephews. His fiancée was there, along with her parents and brothers. “I was very glad to have them all there to watch me walk across the stage and become a trooper,” Martin said. He credits his fiancée for helping him make it to that day. “I couldn’t have done it without the support of Kayla.”

Martin and Dorff are on the roads of Franklin County now, putting into practice their newly acquired knowledge and skills. For now, they each are accompanied by a Field Training Officer (FTO), a seasoned trooper who serves as mentor, ensuring that new troopers are fully ready to take to the roads on their own.

“Every day is different, and I’m always out doing something new,” Martin said. “I love interacting with people — and that’s what law enforcement is all about.”

Those interactions on the job, making genuine connections with people, is important to Dorff, as well. The role of a state trooper is “not just stopping cars, writing tickets and sending people on their way,” he said.

One of the core values of the Patrol is empathy, which should be extended to every person that a trooper encounters, Dorff said.

“We’re not just robots,” he said. “We wear a uniform every day, but when we take it off, we’re just normal people — and I think remembering that is what we need in order to perform well in this job.”