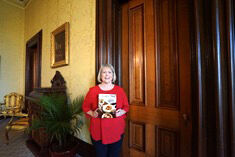 Missouri's First Lady, Teresa Parson, holds a copy of her cookbook, "A Spoonful of History," slated for release in October. 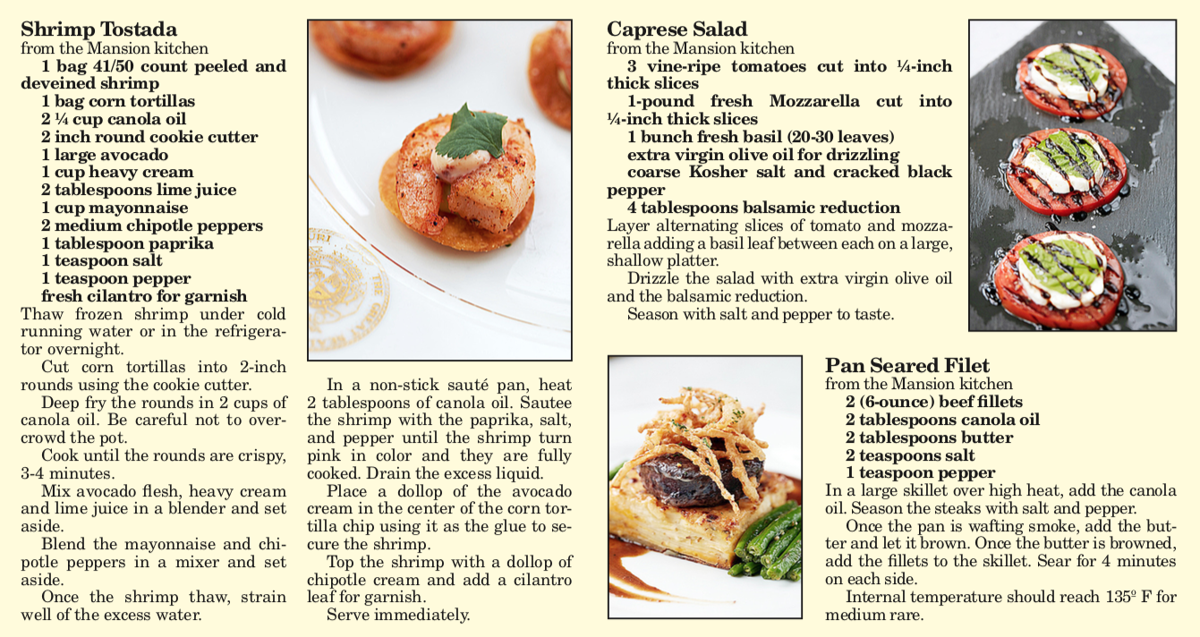 Missouri's First Lady, Teresa Parson, holds a copy of her cookbook, "A Spoonful of History," slated for release in October.

Long before Teresa Parson became the first lady of Missouri, she was just a girl growing up on a cattle farm in the town of Bolivar, in southwest Missouri.

Mornings, she helped her mother in the kitchen, while her three brothers worked outside, milking the cows.  “My mother would fix homemade biscuits,” the first lady recently recalled. “And my chore at the time was to set the table.”  When the boys were done with the milking, the family would often sit down together for breakfast.

Dinnertime was similar, if not more sacred, as family rituals go. “We always had dinner together around the kitchen table — back in those days it was the kitchen table. …We always sat down as a family and had our evening meals together.”

Her family ate a lot of beef — they lived on a cattle farm, after all — and homegrown vegetables, fresh from the garden or canned previously by her mother.

Now it’s decades later, and a pet project of the first lady’s, a cookbook, is slated for release in October.  The book’s title is “A Spoonful of History:  A Culinary Tour of Missouri and our Governor’s Mansion.”

The first lady came up with the idea last year as she contemplated ways to celebrate two major anniversaries: Missouri’s bicentennial and the 150th anniversary of the Missouri Governor’s Mansion, both to occur next year.

The book has come to fruition through a collaboration between the staff of the Governor’s Mansion and the Friends of the Missouri Governor’s Mansion — a nonprofit devoted to preserving the mansion’s interior and historical collections, as well as providing educational programs and free guided tours of the mansion.

With 200-plus pages, “A Spoonful of History” includes a wide range of recipes, along with, as the book’s title suggests, morsels of history.  It’s the sort of cookbook that will likely appeal to cooks and non-cooks alike.

Among the older recipes in the book is one for sweet potatoes from George Washington Carver.  Born onto a slave owner’s farm in southwest Missouri, not long before slavery was abolished, Carver ultimately became a renowned agricultural scientist.  He was a proponent of crop rotation, and he developed hundreds of uses for certain crops, including peanuts and sweet potatoes.

Other recipes in the forthcoming book highlight dishes that have been served in recent times to guests at the Governor’s Mansion.  Shrimp tostadas, a caprese salad and pan-seared filets are among those recipes.

The cookbook draws from Missouri’s past and present but with an eye, too, toward local fare that is dished up in various parts of the state.  “I wanted our entire state to be represented in some way,” the first lady said. Indeed, a number of recipes come from some of Missouri’s locally revered restaurants, including eateries that were recommended by Missouri legislators from various districts.

There’s a recipe for bread pudding, for instance, from the Boji Stone Café in Chillicothe and another for Missouri rainbow-trout ratatouille from Beks restaurant in Fulton.

Closer to home — the Parsons’ home, that is — is a recipe for enchiladas, meaningful to the Parson family because Gov. Mike Parson’s mother used to make them for the family.  Though she’s gone now, Gov. Parson carries on the tradition.  “On Christmas, the governor always fixes his mother’s enchiladas,” the first lady said. “That’s the one day of the year that he cooks. It’s something that he has done since his mother passed away about 12 years ago.”

The Mansion — a Home Away from Home

The governor and first lady’s longtime home is in Bolivar, and they still spend time there with their family — a son and daughter (both married) and six grandchildren. The majority of the time, however, they live in the Governor’s Mansion, their home since June 2018. Jefferson City lies northeast of Bolivar, only a hundred or so miles away, but in many respects the city and the town, the mansion and the house, are worlds apart.

Built in 1871, the three-story Governor’s Mansion incorporates Renaissance Revival architecture.  It is at once stately and opulent. For the first lady, it is a house — “the People’s House,” as she calls it — with a meaningful history.

She is fond of a quote by Geraldine Hall Dalton, who was Missouri’s First Lady from 1961 to 1965.  Mrs. Dalton said, “To live in this house (the mansion) is to have a handclasp with history.  You can’t live there long and not grow to love the building.”  About first lady Dalton’s quote, the current first lady said, “That statement, even after 60 years, reflects my own feelings about the People’s House, because the old house just grows on you. … I really appreciate the history and all the things that have occurred here over the past 150 years.”

“A Spoonful of History,” slated to be shipped in October, can be preordered online at missourimansion.com/cookbook. The cost is $40, plus $8 for shipping and handling.  Proceeds from sales of the book will go toward preserving the mansion’s interior and historical collections.