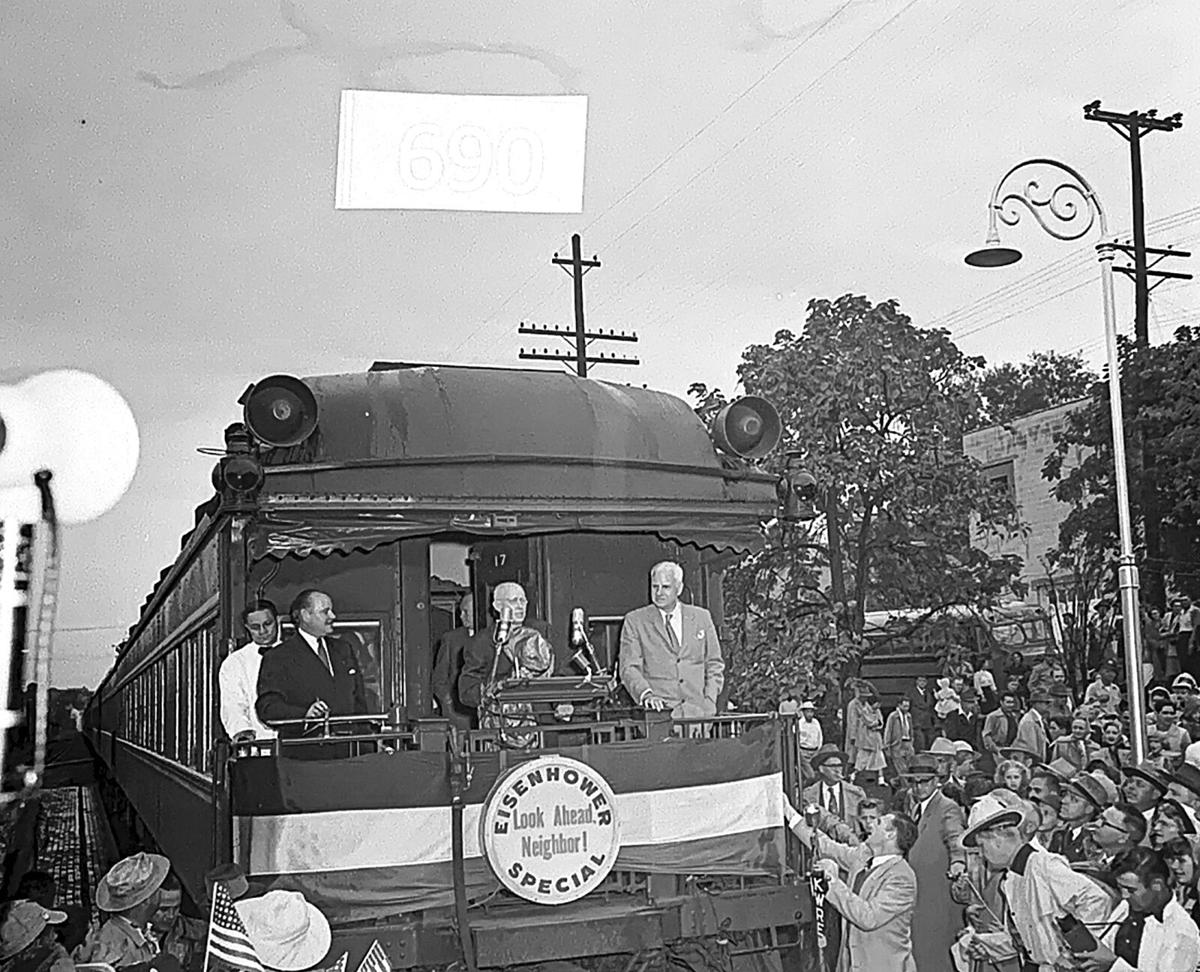 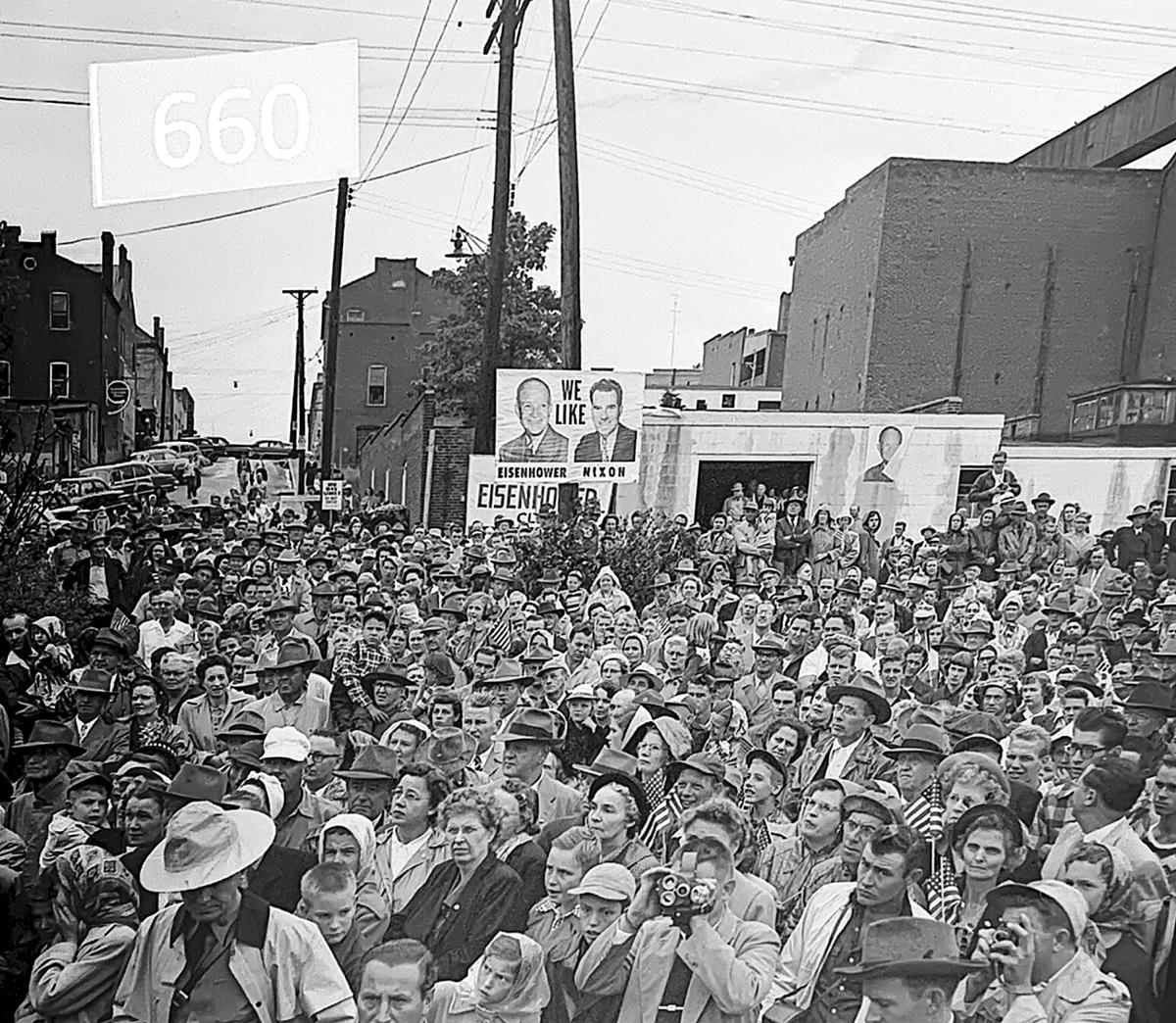 A crowd gathered at the train depot to get a glimpse of Gen. Dwight D. Eisenhower, who campaigned here ahead of the 1952 election. 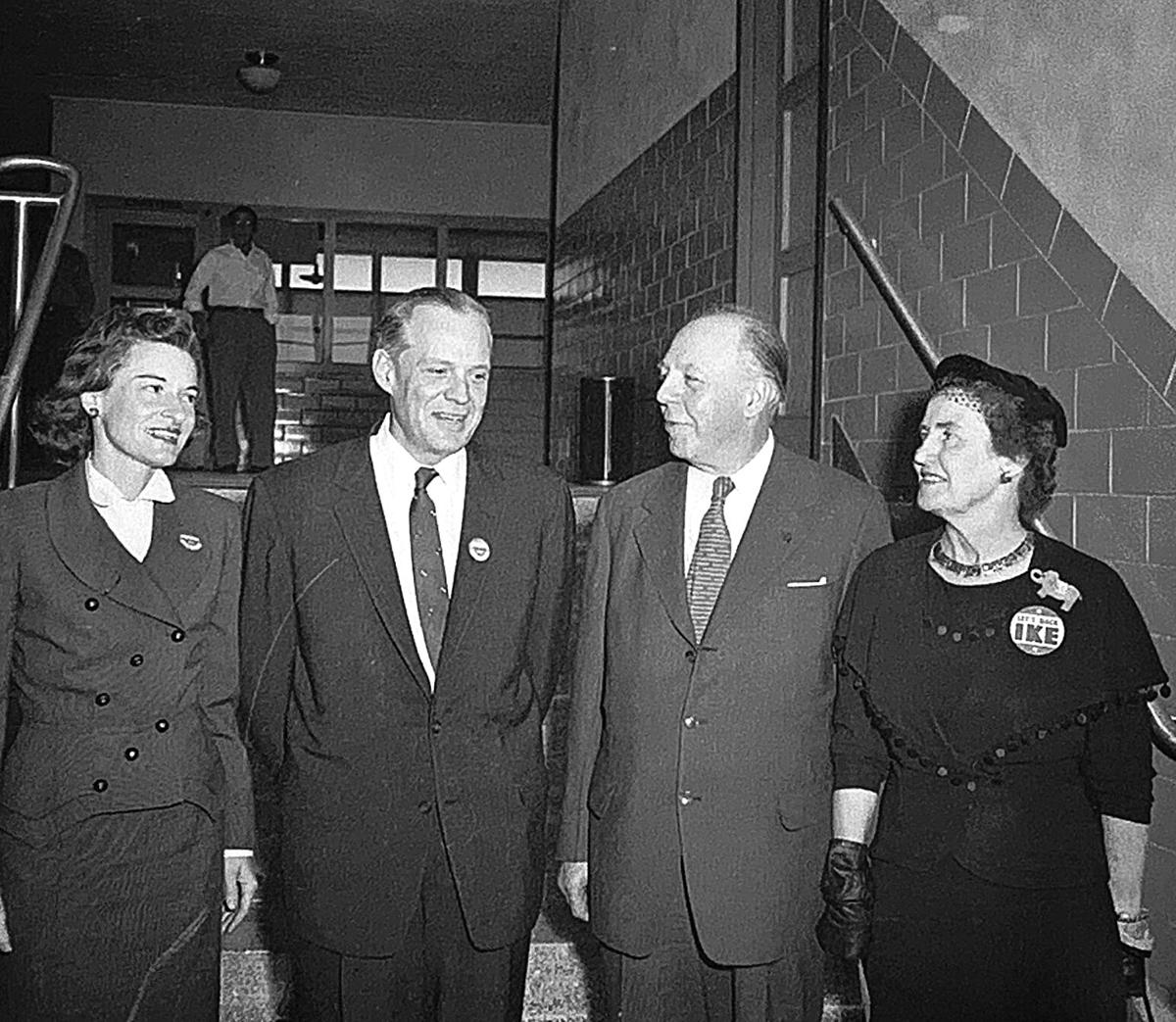 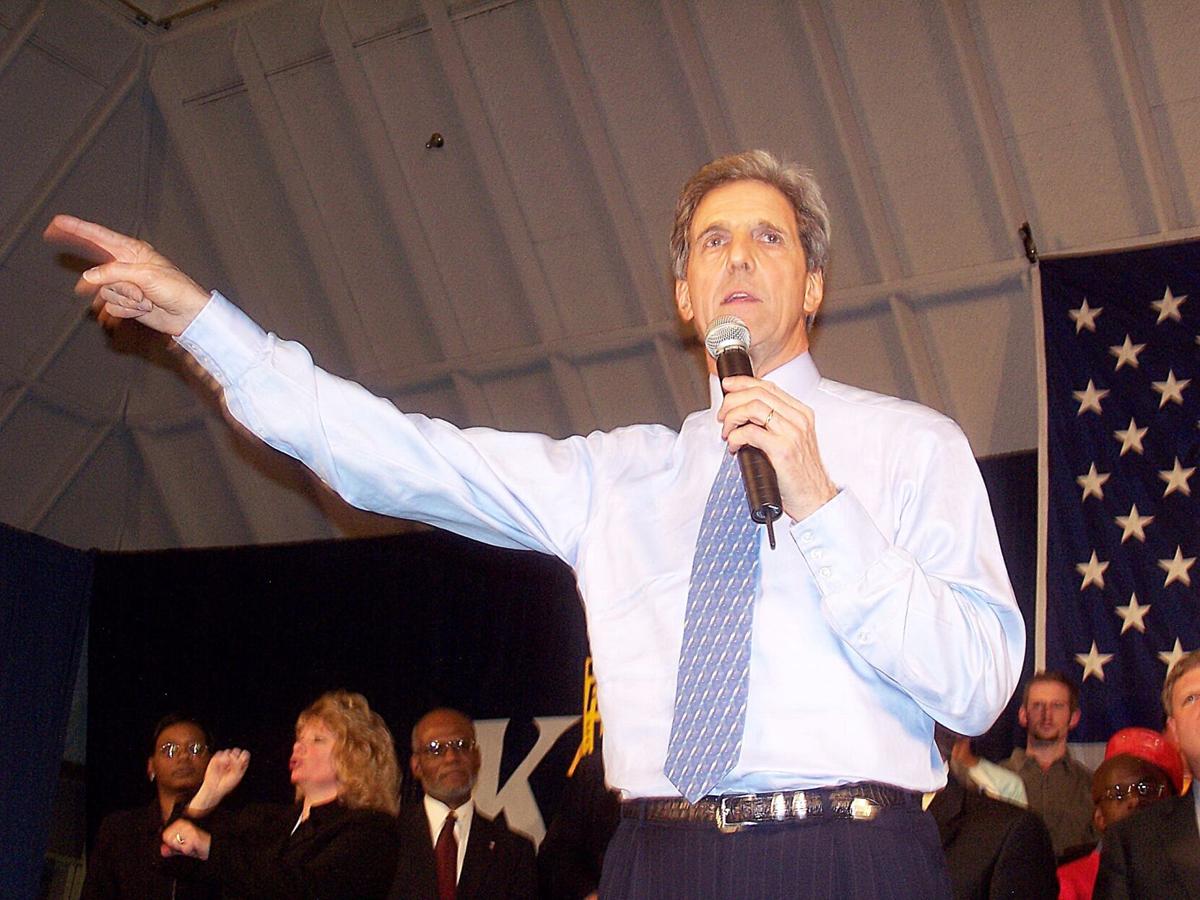 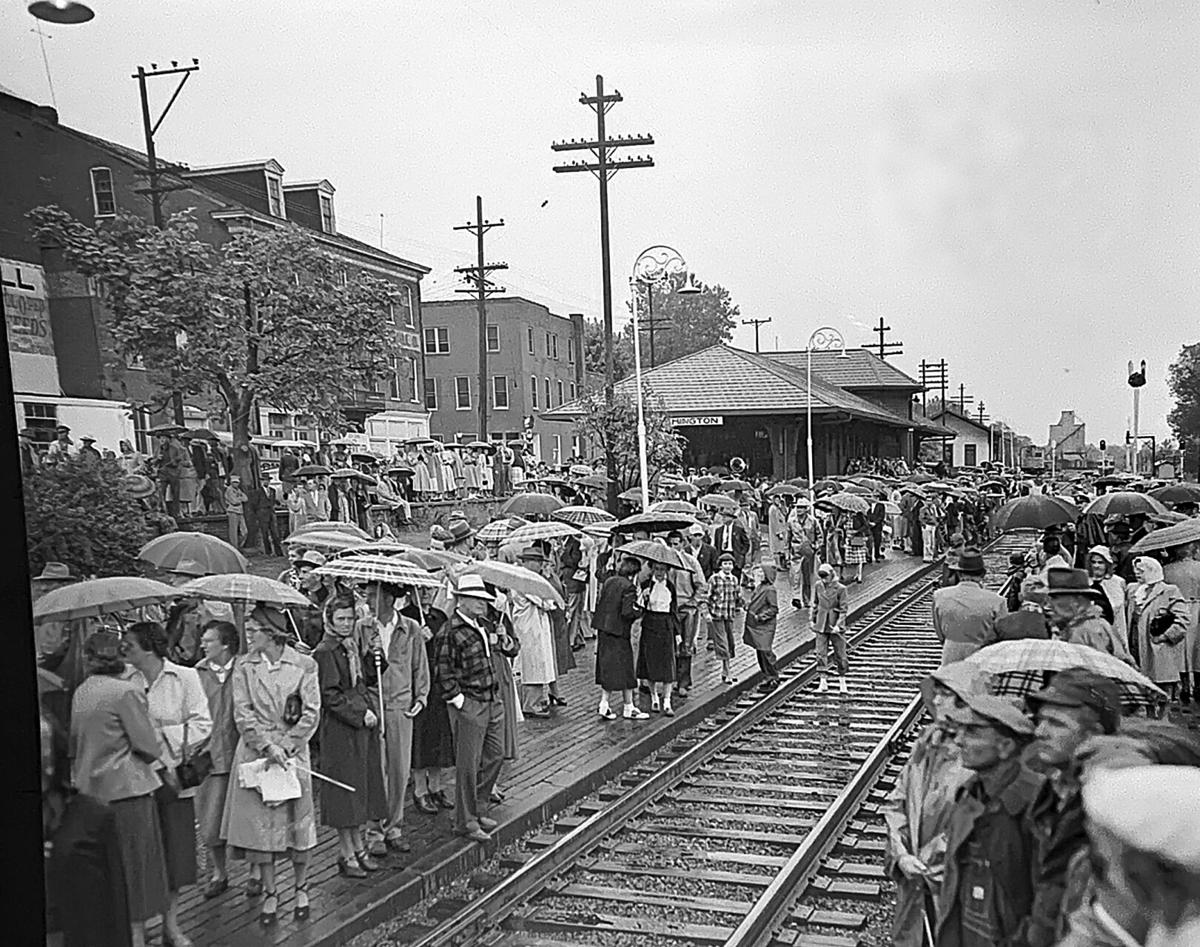 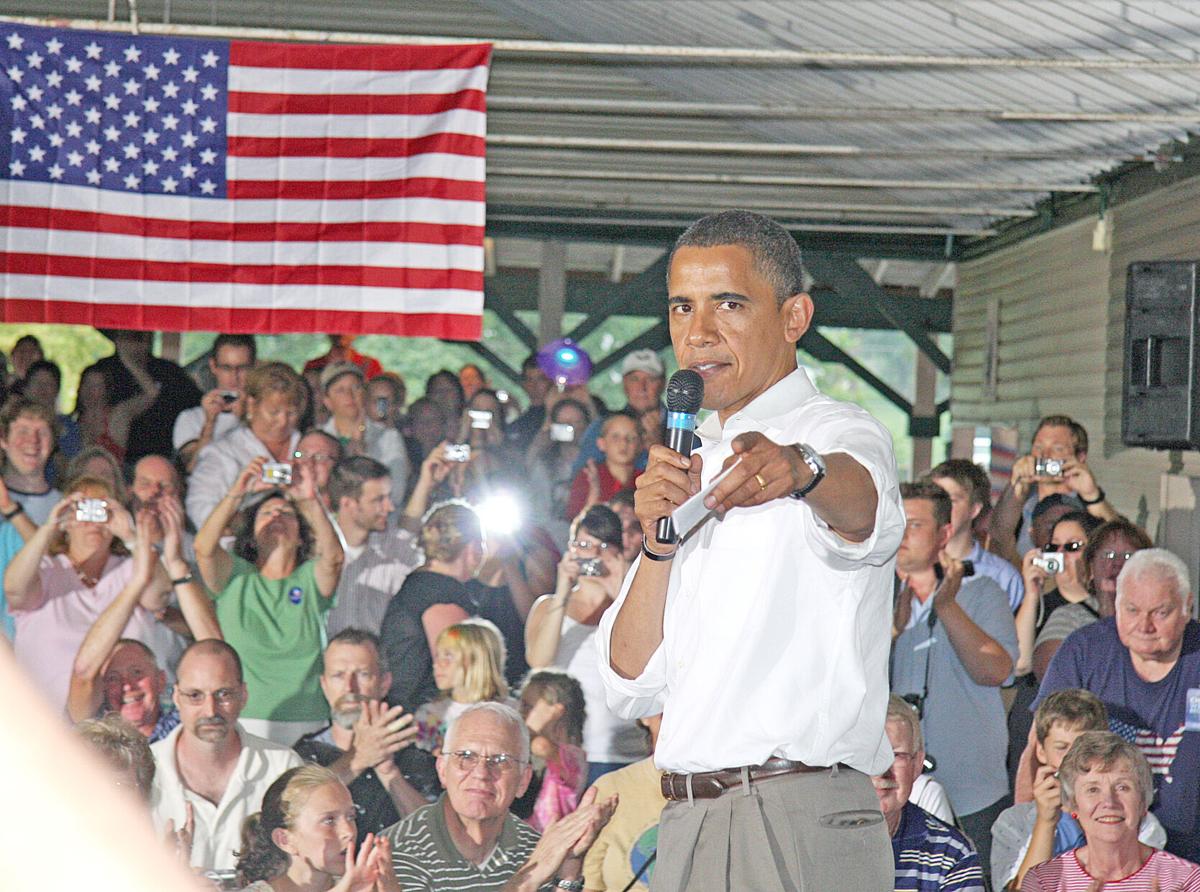 A crowd gathered at the train depot to get a glimpse of Gen. Dwight D. Eisenhower, who campaigned here ahead of the 1952 election.

With fewer than 20 days to go in the presidential election, it is unlikely President Donald Trump’s itinerary or Vice President Joe Biden’s campaign itinerary will include a stop in Franklin County.

Instead, Trump and Biden are expected to focus much of their remaining time in eight critical battleground states that are likely to determine the outcome in 2020 — Pennsylvania, Michigan, Wisconsin, Florida, Arizona, Georgia, Minnesota and North Carolina.

Missouri is not “in play” this election. But that wasn’t always the case. Missouri had for a century been the nation’s ultimate bellwether state in presidential elections. That changed when it turned Republican during Obama’s two victories. Trump won it by almost 19 points in 2016. The state continues to trend red.

Missouri is the only state that picked the winning presidential candidate in every presidential election from 1904 until 2004 with the exception of 1956 — choosing Adlai Stevenson II over Gen. Dwight D. Eisenhower, the winner in a national landslide, by less than 1 percent of the vote. It’s why national political pundits used to say, “As goes Missouri, so goes the nation.”

One of the first, if not the first, president to visit Franklin County was Theodore Roosevelt, who was on a train that stopped for water in Washington Oct. 19, 1916. It wasn’t a campaign stop as Roosevelt had been out of office for several years by then.

According to “A History of Washington” by local historian Ralph Gregory, Roosevelt made an appearance on the end of the last car to speak with citizens and students from the high school at the train depot. The train stopped for about five minutes, and Roosevelt made a few remarks in English and German. He told the crowd, “Do not be German-Americans nor English-Americans, but be Americans.”

“As far as I know, he’s (Roosevelt) the first president to stop here, but I couldn’t say for sure,” Marc Houseman, museum director for the Washington Historical Society, said. “Franklin County had newspapers going back to the 1840s, but no copies exist until 1869. There is scant historic references before that. For instance, if (President) Buchanan was ever here, I don’t know how you would even know.”

William Jennings Bryan, who ran unsuccessfully three times for president on the Democratic ticket in 1896, 1900 and 1908, spoke for three hours at a Washington park in July 1922, according to a story in the Washington Citizen, a newspaper published in the city from 1905 through 1984.

Much of his lecture was in opposition to Darwinism. Bryan was an outspoken proponent of prohibition, and many “wets” in Washington refused to go to the park to hear him speak. Bryan was paid $250 for his lecture, and according to news reports, he spent the night in Washington.

On Oct. 18, 1940, Wendell Willkie, the Republican candidate trying to unseat Franklin D. Roosevelt, campaigned in Washington. According to a story in The Missourian, a crowd estimated at 5,000 to 7,500 turned out to hear him stump from the back of a train for about 10 minutes. The crowd was so thick it was impossible to move through it. A sidebar story in that edition of the newspaper noted 10 Franklin County men were fleeced of a total of $190 by pickpockets in the dense crowd.

Willkie was unsuccessful in November of that year. He carried only 10 states (82 electoral votes to Roosevelt’s 449), but his popular vote of more than 22 million was the largest ever received by a Republican until that time.

Three years later, President Roosevelt stayed overnight in Washington on his special train. The Missourian reported a company of soldiers was assigned to guard the train and tracks in the area, but they did not know who was on the train. The soldiers learned later it was the president. Some of the soldiers recalled seeing Fala, the president’s dog, being taken out for a morning walk.

Harry Truman, an Lamar, Mo. native, would take over for Roosevelt after his passing in 1945. Throughout his long political career and after, Truman visited Washington on a number of occasions.

“The story is Truman would get off the train on his many trips through Washington and walk up Elm Street to have a beer with Heinie Diestelhorst, the owner of the Old Dutch,” Houseman said. “He and Heine were World War I contemporaries.” Diestelhorst served in the German Navy.

William L. Miller, Sr., former Missourian publisher, said he remembers Truman coming to Washington for a Democratic fundraiser in the 1930s hosted by his father, James L. Miller, Sr., a friend of Truman’s, during one of Truman’s U.S. Senate runs.

Truman served in the U.S. Senate from 1934 through 1945 when he became Roosevelt’s vice-president.

Truman traveled through Washington on the presidential train in March 1946 with former British Prime Minister Winston Churchill en route to Westminster College in Fulton, where Churchill would deliver his famous “Iron Curtain” speech.

A front page story in The Missourian said the train “crept through Washington at about three or four miles an hour and President Truman stood on the observation platform smiling and waving to the crowd.” Both the Washington High School and St. Francis Borgia bands played for a “large” crowd that gathered for the event.

It was an event that almost didn’t happen. According to The Missourian’s story, Washington Chamber of Commerce head Walter Otto, Missourian Publisher James Miller and B.J. Hungate imposed on Missouri Congressman Clarence Cannon to convince Truman’s staff to make an appearance in Washington.

Truman’s opponent in the 1948 presidential race, Republican Thomas Dewey, campaigned in Washington Oct. 2, 1948. He delivered a speech from the back of a train along with other GOP candidates. Louis B. Eckelkamp, Republican district chairman, introduced Dewey and the other candidates. A large crowd — estimated to be around 5,000 people — listened to the speech, according to a story in The Missourian.

Four years later, Gen. Dwight D. Eisenhower campaigned in Washington Sept. 20, 1952. A temporary platform was erected and about 2,000 people “braved a slow rain” to see the Republican candidate. The Missourian reported eight area bands played for the event, which was broadcasted live by radio station KWRE of Warrenton.

At the outset of his talk, according to The Missourian’s article, Eisenhower mentioned that there were too many Missourians in Washington, D.C., and he hoped to “bring them back home where they belonged” — a dig at Truman and his administration.

“If you decide to go ahead with the Republican Party,” Eisenhower told the crowd, “we pledge to do this first: first, we propose to do good for the people of the United States, and second, there shall be no trifling with public funds.”

The 2004 Democratic ticket of John Kerry and John Edwards stopped in Washington August 6, 2004. The candidates arrived on a train, which stopped for about 45 minutes so the candidates and their wives could deliver remarks and shake hands. An enthusiastic crowd estimated at 1,500 to 2,000 waited nearly two hours for the train to arrive.

“Change is coming to Washington — both Washingtons,” Kerry told a cheering crowd. Many observers felt Kerry’s wife, Teresa Heinz Kerry, delivered the best speech during the stop, praising the town and the Midwest. She even mentioned Lewis and Clark’s famous westward journey that passed through Washington on the Missouri river.

The event was closed to the general public; however, 200 tickets were given away on a first-come, first-served basis the day before at the Franklin County Democratic Headquarters in Union. Obama delivered remarks, mingled with the crowd and even served barbecue at the event.

Houseman said when he gives his “Presidential Connections” presentation, he reminds students and others that “all history is local history.

“When you are in a classroom learning about presidents or anything that takes place some time ago or somewhere else, the student can’t always relate to it,” Houseman said. “But you have to remember that whoever is occupying the White House 1,000 miles away – it’s still our history, it’s Washington’s history, it’s Franklin County’s history.”

From former presidents to president hopefuls, Franklin County has welcomed many from "the other Washington."