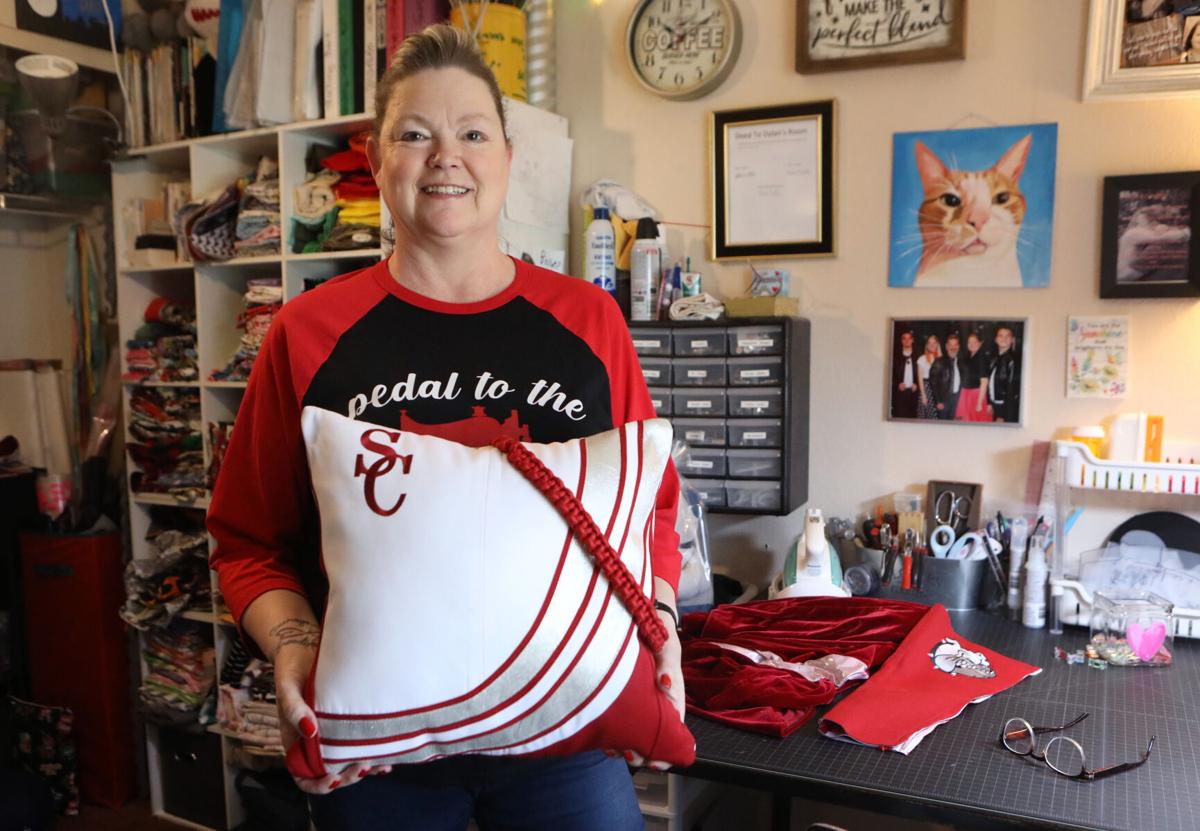 DeAnn Fiedler holds a completed commemorative pillow April 22 in her home. While some pillows already purchased have gone to current students, many have been purchased by alumni of St. Clair's band program. 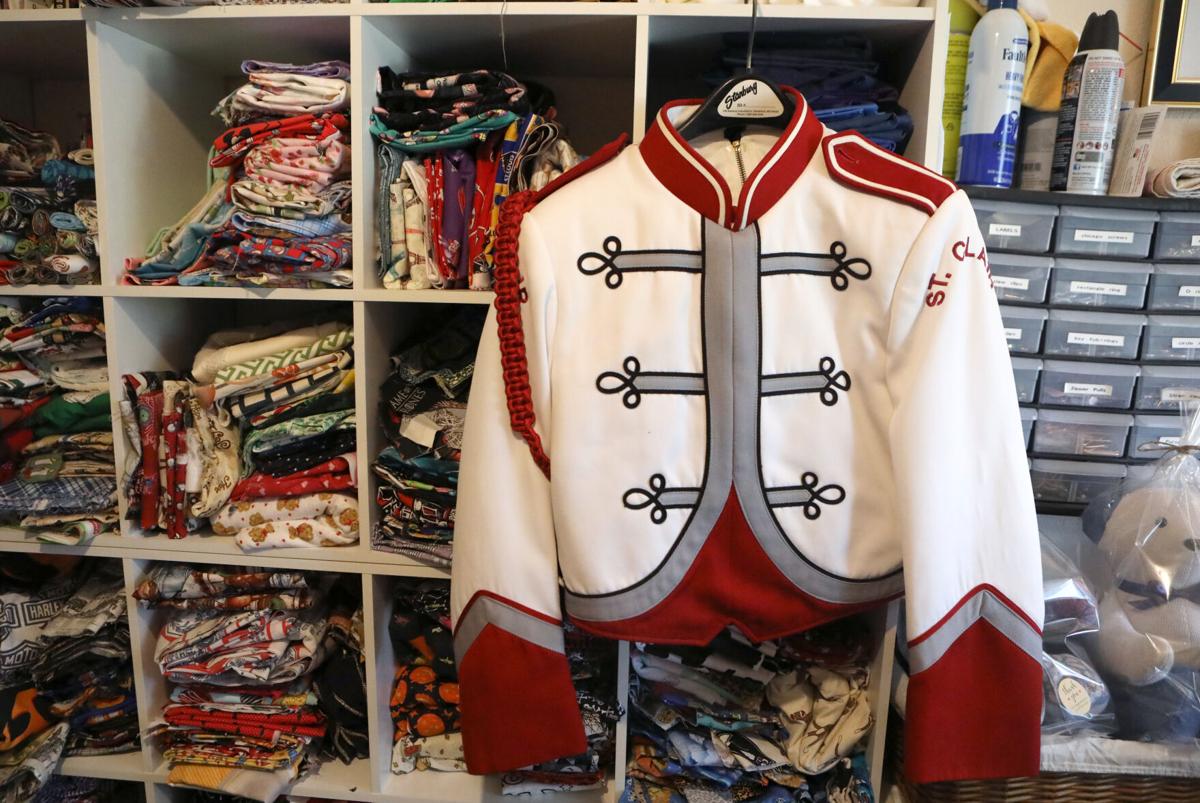 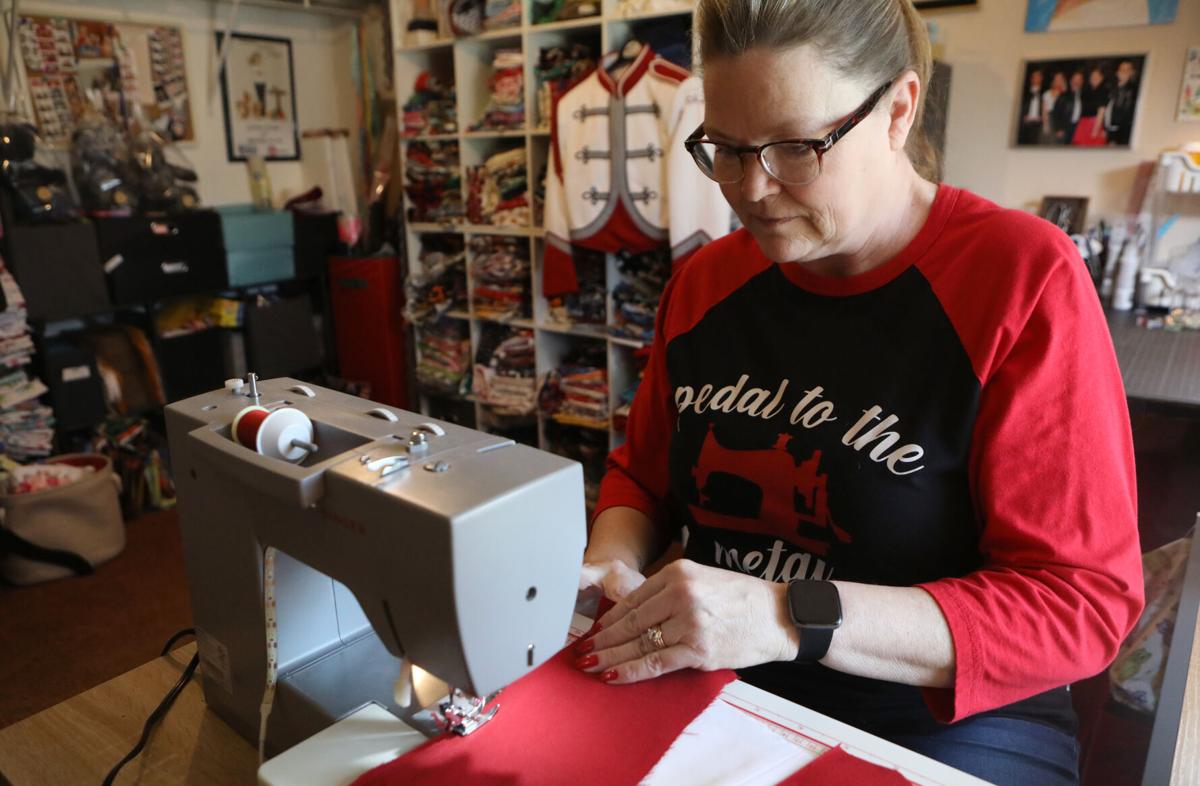 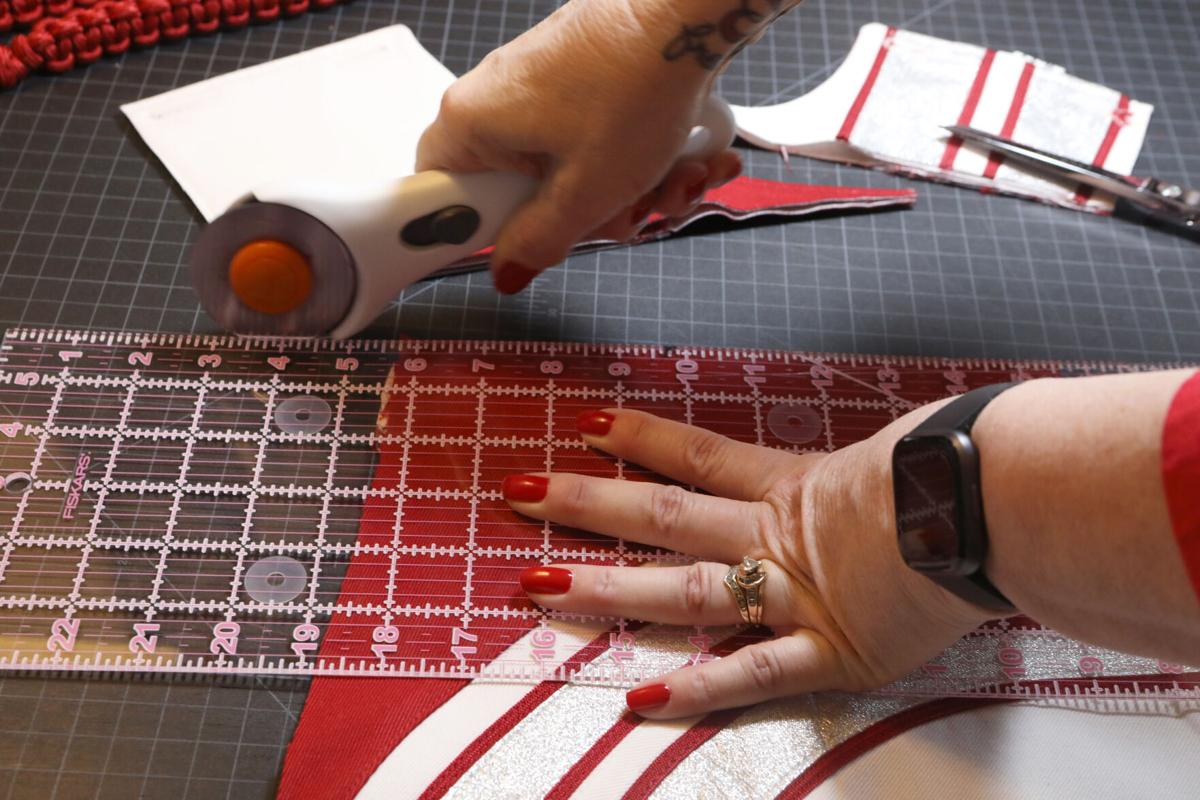 DeAnn Fiedler holds a completed commemorative pillow April 22 in her home. While some pillows already purchased have gone to current students, many have been purchased by alumni of St. Clair's band program.

For more than two decades, the vibrant green turf of the football field, the golden wood of the gymnasium and elsewhere have often been decorated by students marching proudly in red and white uniforms and playing sleek, shiny instruments. In the St. Clair school district, about 240 students from fifth through 12th grade are involved in the band program, with 70 of them in the high school marching band. From 1998 to 2020, those students wore the same uniforms year after year, Director of Bands Tim Karth said. Now, 22 years later, the students have new uniforms and the chance to keep a memento of their time in the marching band.

As a fundraiser for a trip to march in a parade at Walt Disney World in Orlando, Florida, in spring 2022, students and alumni can purchase a pillow made from the fabric of the old uniforms. DeAnn Fiedler, owner of DeAnn’s Dazzling Designs in St. Clair, is repurposing the bright jackets and pants of the old uniforms into commemorative pillows, complete with braided cord and the “SC” emblem. The pillows are $50 each or $60 with an embroidered name.

“I’ve had so many parents reach out who are so excited to be able to do this for their kid,” Fiedler said. “It’s cool because (band) is a group; it’s a family.”

That company provided the service, but he couldn’t find a local company at first. Then a parent told him about Fiedler’s business, which specializes in creating teddy bears and other keepsakes from fabric that has meaning for people. She’s made bears from everything from wedding dress fabric to the favorite shirts of deceased loved ones.

Karth didn’t realize it until later, but Fiedler was a perfect match for the project for another reason.

“As a parent of kids who went through band, one of the reasons I think this was such an amazing idea is because there’s a lot of pride and a lot of hard work,” Fiedler said. “It’s a community in itself, so to be able to take that (feeling) and always have it … those uniforms are sacred, so it’s exciting to be able to keep a piece of it.”

So far, Fiedler has made about 60 pillows from the uniforms, with each taking her a few hours to finish. There are 250 old uniforms to work from, and each uniform makes one pillow. Much of the stitching Fiedler does is meant to keep the fabric, which in most cases has been altered dozens of times to fit multiple students.

Karth said a good life expectancy for a high school band uniform is about 10 years. Each season, they’re worn to football games, three to four marching band competitions, parades, pep rallies and assemblies, and then they’re passed from a graduating senior to an incoming freshman.

“We are extremely grateful for those old uniforms,” Karth said. “The color had held up, but they were starting to fall apart. The amount of sewing we had to do every year was a lot.”

Karth said many parents have ordered pillows for their band students, especially graduating seniors, but the majority of sales are to alumni of the band program. At least one band member who graduated in 1998, the year the uniforms were bought, has ordered a pillow. In one family, a grandparent of a current student bought two pillows — one for the grandchild and one for her child, the parent, who also marched in the St. Clair band.

“Band is a unique class,” Karth said. “It’s the only class (where) you stay with the same teachers all the way through. From when they begin in fifth grade to when they graduate, it’s eight years, so we really get to know them. And then just to spend that much time together in the same room with the same kids, you become like a family. This is a nice souvenir of that.”

Students and alumni can order the pillows through June at stcom.org/banduniforms.