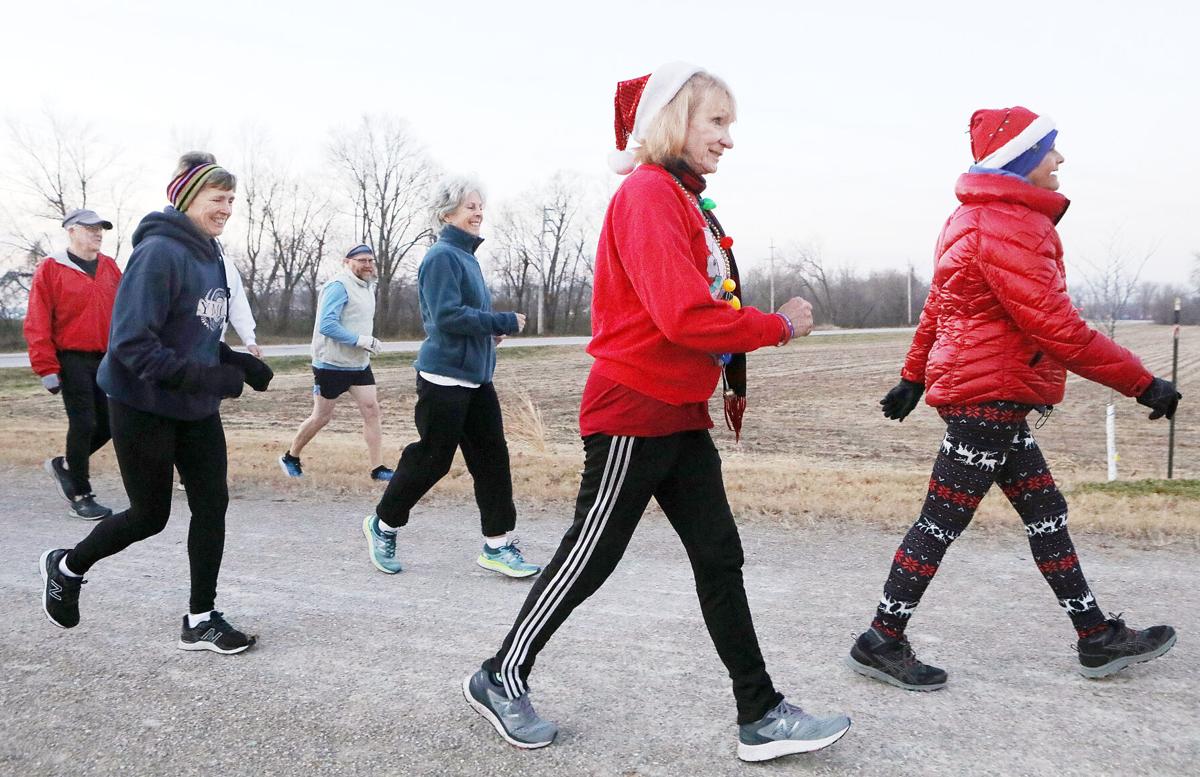 The McFun Runners set off on their morning jogs and walks Dec. 4 at the Dutzow Trailhead of the Katy Trail. Usually the group meets each Saturday at the Washington McDonald’s, but once a year, members start their trek in Dutzow. 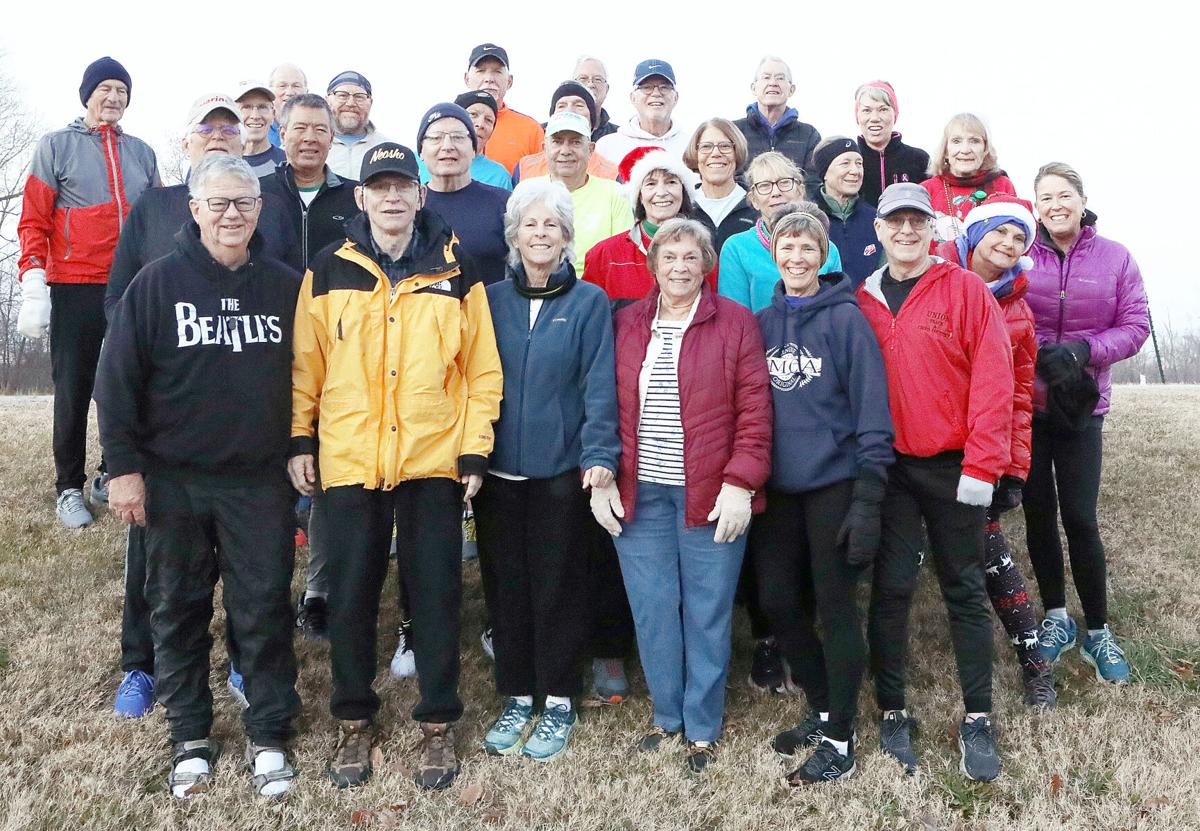 Members of the McFun Runners gather for a group photo Dec. 4 at the Dutzow Trailhead of the Katy Trail prior to their Saturday morning exercise to mark the group’s anniversary. 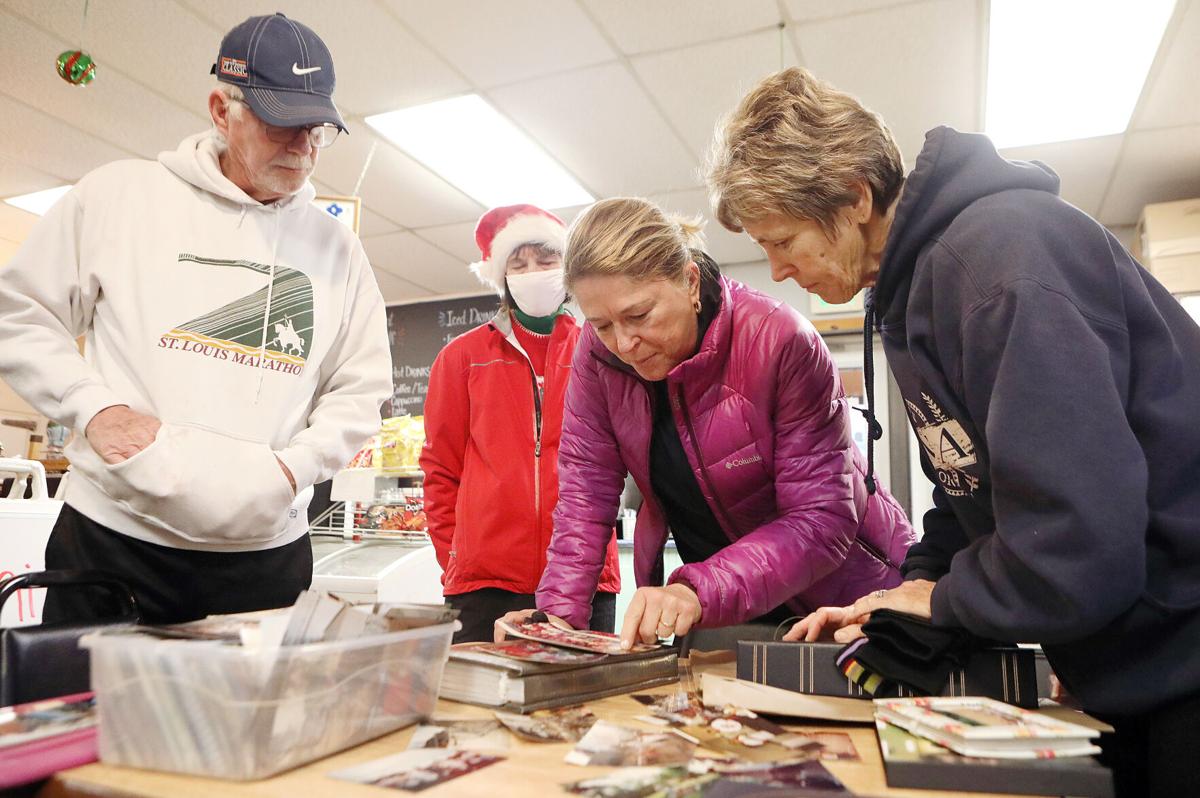 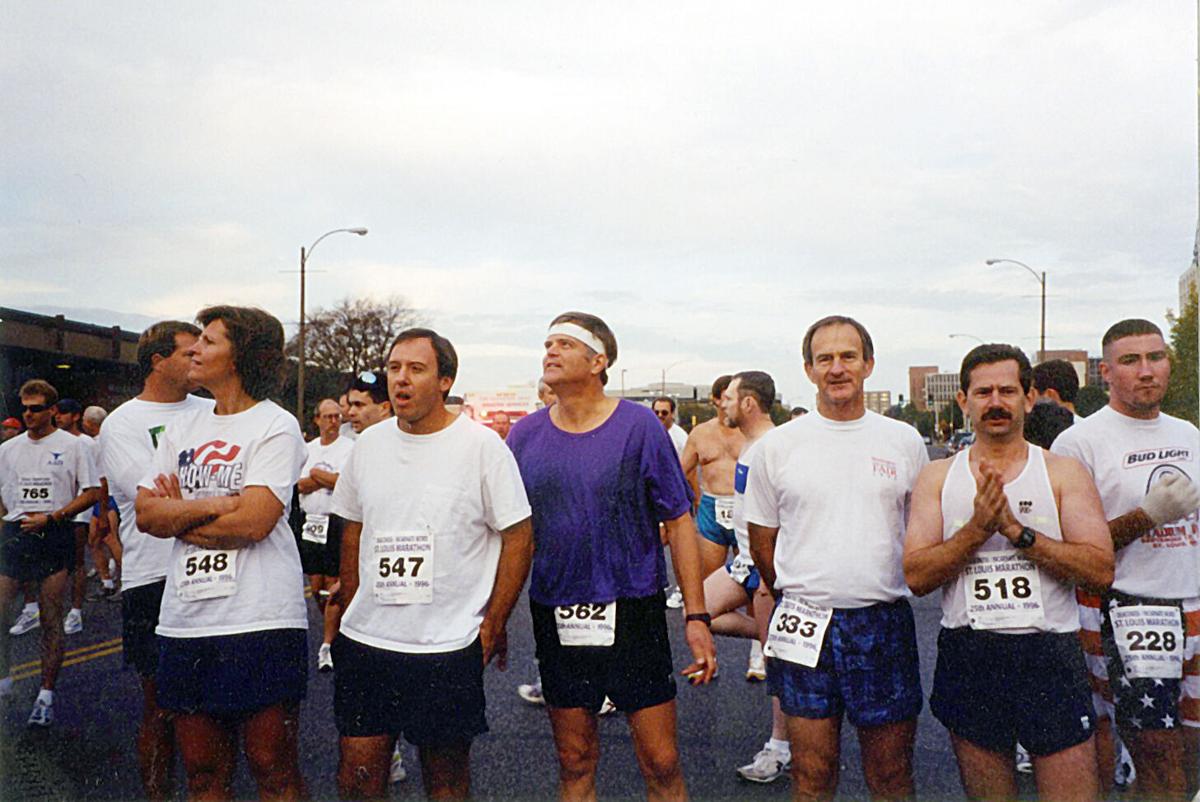 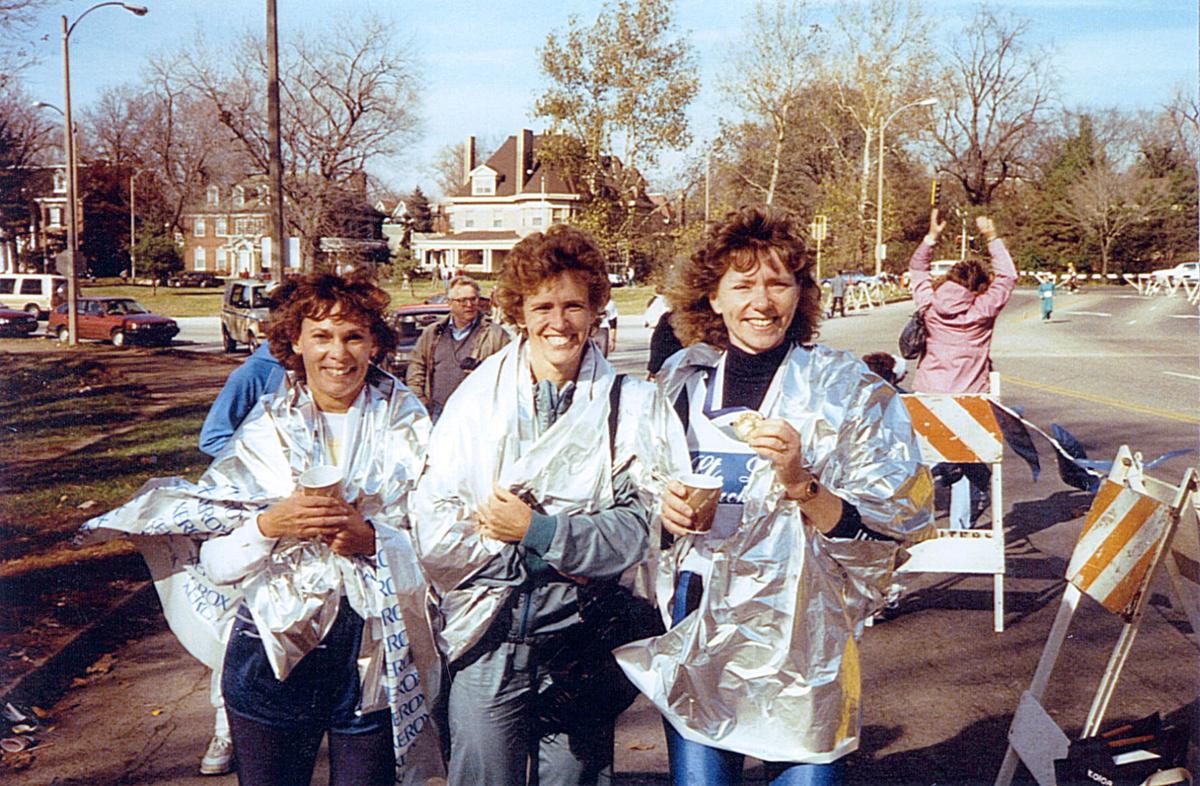 Marilyn Riley, Ann Hartley and Diana Hall stand at the finish of a race. Although the McFun Runners is mainly a social running club, many of its members participate in competitive races, and some have even run the Boston Marathon multiple times. 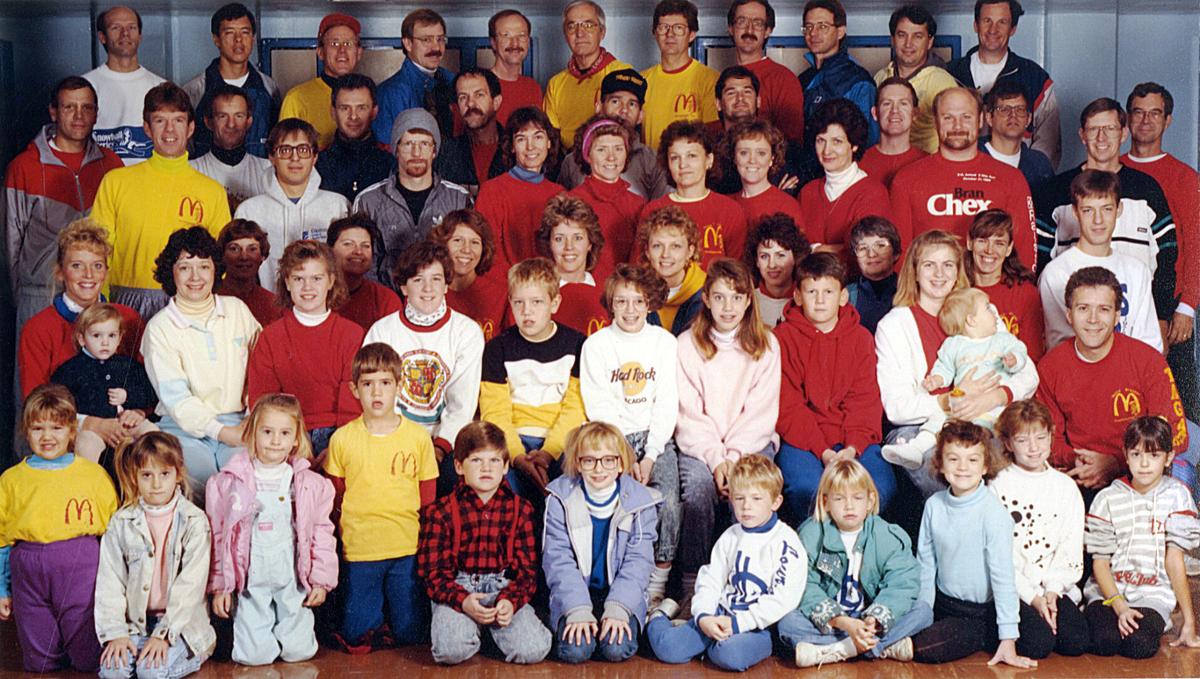 Members of the McFun Runners and their children are assembled for a photo in the club’s early years. Several runners said the club members’ children grew up together.

The McFun Runners set off on their morning jogs and walks Dec. 4 at the Dutzow Trailhead of the Katy Trail. Usually the group meets each Saturday at the Washington McDonald’s, but once a year, members start their trek in Dutzow.

Members of the McFun Runners gather for a group photo Dec. 4 at the Dutzow Trailhead of the Katy Trail prior to their Saturday morning exercise to mark the group’s anniversary.

Marilyn Riley, Ann Hartley and Diana Hall stand at the finish of a race. Although the McFun Runners is mainly a social running club, many of its members participate in competitive races, and some have even run the Boston Marathon multiple times.

Members of the McFun Runners and their children are assembled for a photo in the club’s early years. Several runners said the club members’ children grew up together.

Much has changed in the three-plus decades since four friends met up for a morning run outside the Washington McDonald’s, but for nearly 1,870 Saturdays since, at least one thing has stayed consistent: the gentle thud of soles hitting pavement in a synchronized rhythm for an 8-mile loop starting at 7 a.m. sharp — and the friendships it has created.

Diana Hall said she never would have anticipated all that would come from her; her husband, Bill Hall; and the couple’s friends Dr. Jim Cassat and Dr. Kim Colter meeting up for a Saturday morning run in December 1985. But on Saturday, Dec. 4, the group, which is now 30-plus members strong and is fondly called “The McFun Runners,” met for an anniversary run on the Katy Trail at Dutzow to celebrate the group’s 35th year, which was technically last year during the COVID-19 pandemic.

When they’d finished, members pored over photos from marathons, trips, children’s weddings and more that they have enjoyed together over the years, sipping coffee and munching on breakfast at Dutzow Deli.

“After we run, we always sit down and talk for an hour or so,” Diana Hall said.

“There have been plenty of problems of the world that have been solved while we’re visiting on Saturday mornings,” Cassat said, smiling.

When the McFun Runners started, Diana Hall said the main goal was to train for upcoming marathons. The whole group was involved with the St. Louis Marathon, and Diana and Bill Hall were planning to attend the New York City Marathon the following November. The group didn’t advertise but did mention to friends that the Saturday morning runs were “an open invitation.”

New faces, including Larry Kloppe, Dr. Tim Long and Greg Curran, started coming shortly thereafter. Curran had never run a marathon before and said he worried that he wouldn’t be able to keep up with the group, but instead he found a group of people eager to teach him how to train for it.

“The thing that I’ve always liked about it is everyone has someone their own level to run with,” Long said. “There were the ones who were faster, talented athletes, but everyone had someone else who could run at your speed and distance.”

And, the runners explained, if you know someone else is counting on you to match their speed, it makes it easier to brave the morning chill each week. Diana Hall said group encouragement and motivation is a huge reason why people stick with the group for so many years.

“You have someone else that you feel responsible to or connected to. That’s going to make you want to get out there more than if you were pounding the pavement all by yourself,” Long said. “I would never do it by myself. This is the encouragement I need.”

For a time, the group saw multiple generations of families run each Saturday. Diana Hall said members’ children were running alongside the group as soon as they could walk. Some were in sports at school and used the weekend sessions to train, but others just enjoyed the company.

“All our kids grew up together,” Diana Hall said. “Now a lot of them are married with their own kids.”

For at least one runner, his children were what brought him to the group. Chuck Eichmeyer’s daughter was a cross country runner in high school and asked him to make a highlight film the way he’d done for his son when he played football.

“I would start at their starting line and then go to two or three different spots in the course. I was running with all this video and camera equipment, and by her junior year, they were getting faster, and I was getting slower,” Eichmeyer said. “I thought, ‘I’m going to have to get in better shape for this.’ ”

Eichmeyer improved each year, and last year he ran the most miles he’d ever completed — 3,100. He said friendships made through the McFun Runners, which he joined to help train to cover his daughter’s cross country meets — were essential to meeting the goal.

“They’ve always been so encouraging, so friendly, no matter what your skill level is,” he said. “It’s always been a fun group.”

In addition to the weekly Washington runs, the group has also made an annual trip to the St. Louis Marathon, where the McFun Runners who aren’t competing set up a stand to offer water and encouragement to passing runners.

Members have also made appearances in several other marathons over the years. The group includes veterans of the New York City, Twin Cities and Boston marathons — the latter of which runners have to qualify for — and of the Bix 7 Road Race in Davenport, Iowa. Group members have also traveled together for bucket list hikes, such as the roughly 8-mile Bright Angel Trail in Grand Canyon National Park.

Lynda Merrill, a retired teacher, has used the group to train primarily for similar long hikes, including one she took three years in a row in Alaska. The 33-mile Chilkoot Trail was once traversed by more than 30,000 men, women and children during the Klondike Gold Rush in 1897-98.

“I moved to Washington in ’86 and joined (McFun Runners) right away,” she said. “It was a good way to meet people.”

Meeting people is also what first brought out Tom Dunlavy when he moved to Washington from St. Louis in 1985. The former Boeing estimator said he enjoyed meeting a breadth of people such as doctors, lawyers, teachers and nurses.

Long agreed, saying, “The truly marvelous thing about this group is that it’s such a cross section of people from all walks of life.”

He and Long walked the anniversary route Saturday, which Diana Hall said is more and more common as members approach their 70s and 80s. At 81, the group’s oldest member is Kloppe. He and several others — including 80-year-old Bill Hall — still run, but health problems will frequently crop up among the group.

“There’s back issues, knee issues, every kind of ailment, but all of us are still committed to the idea of being part of the group,” Long said.

Mark Spann, who ran 2,020 miles in 2020, said he has also recently transitioned to walking and has enjoyed being able to still spend time with the group.

“When we meet at McDonald’s, especially in the summer, they’ll often take lawn chairs and sit out there,” Diana Hall said. “Even in the winter, they’ll put their coats on after we run and sit around and talk.”

As the group runs into Year 37, Long said time spent with the cross section of people who make up the club will likely remain his favorite thing about the McFun Runners.

“It’s just a great sense of community and keeping connected, staying up on everyone’s lives,” he said. “I think the more people you’re connected to, the healthier and happier you’re likely to be.”