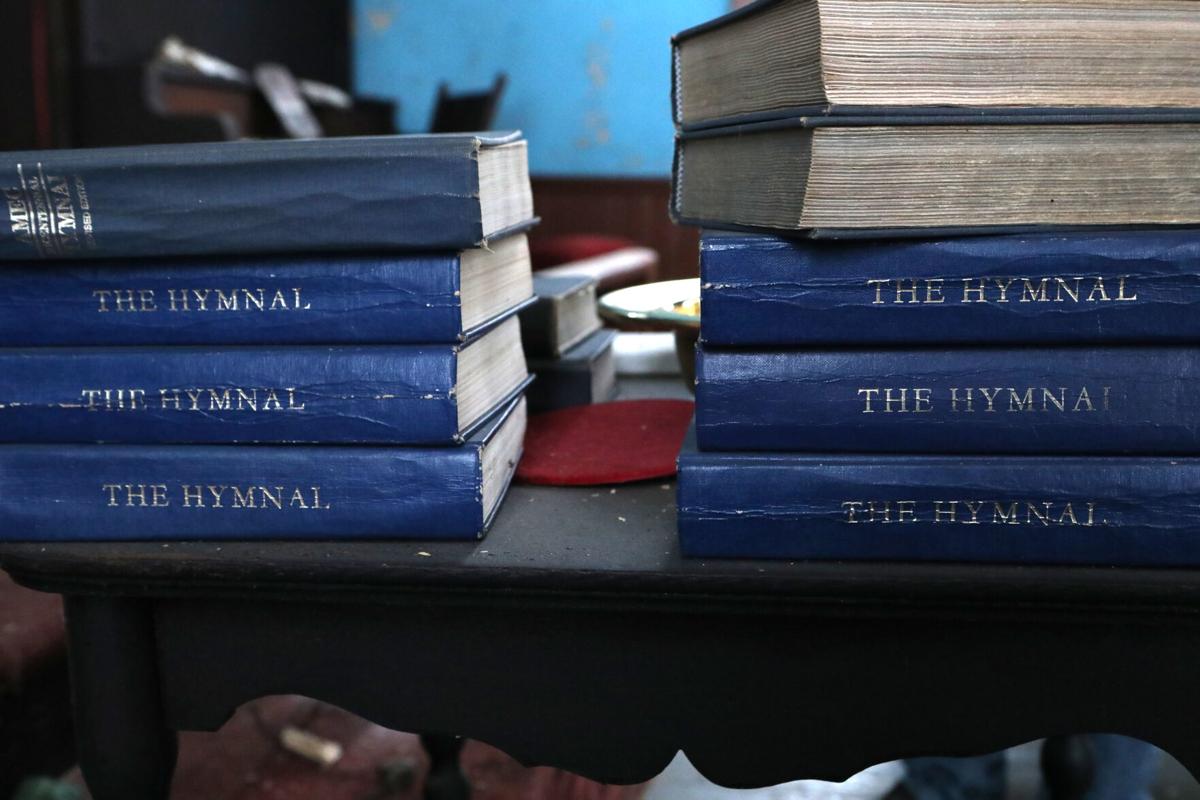 Hymnals sit on a table in front of the pulpit at Anna Bell Chapel Wednesday, Feb. 10. 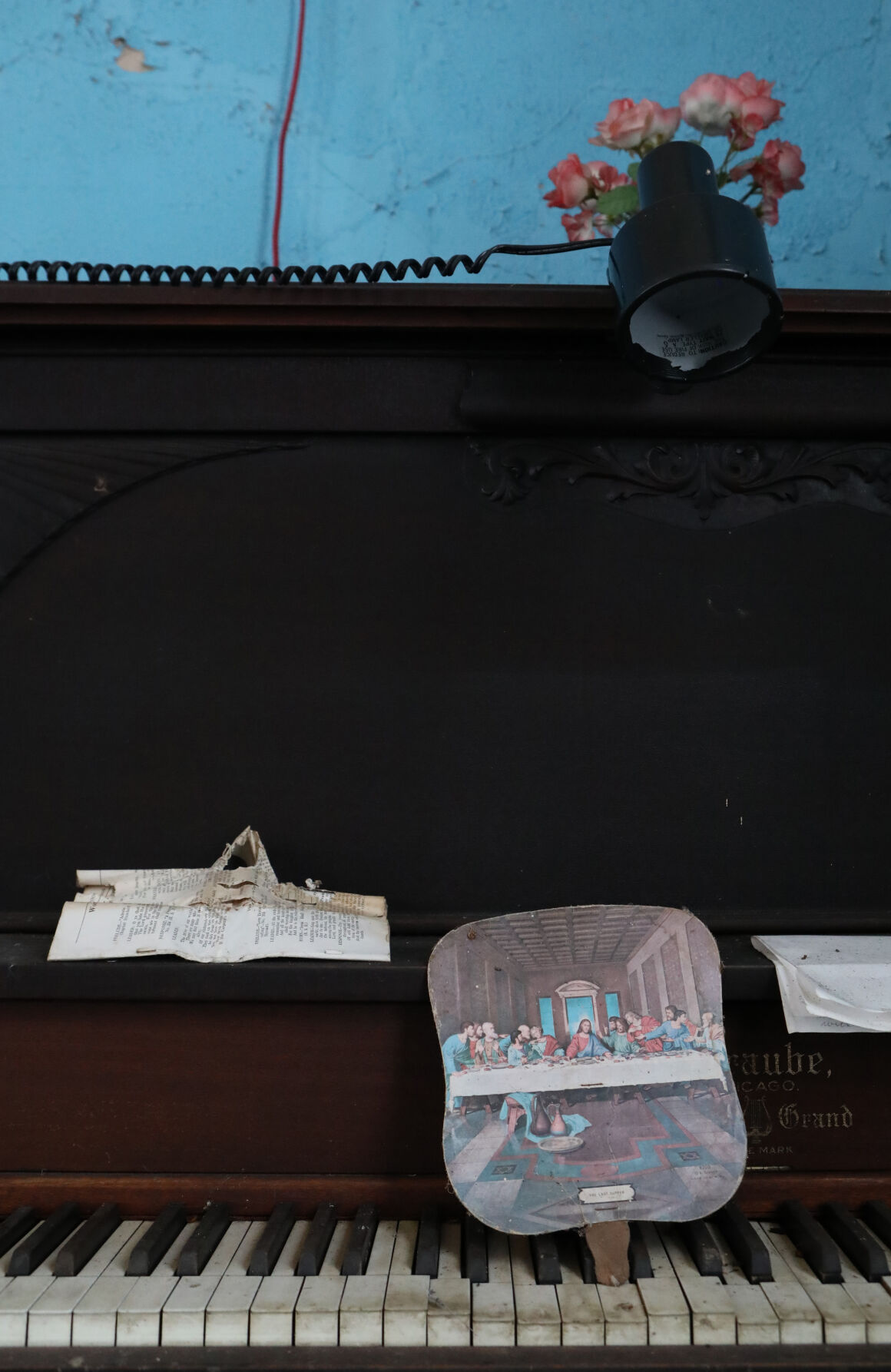 A fan and discarded sheet music sit on the piano at Anna Bell Chapel Wednesday, Feb. 10, about 30 years after the church last held services. 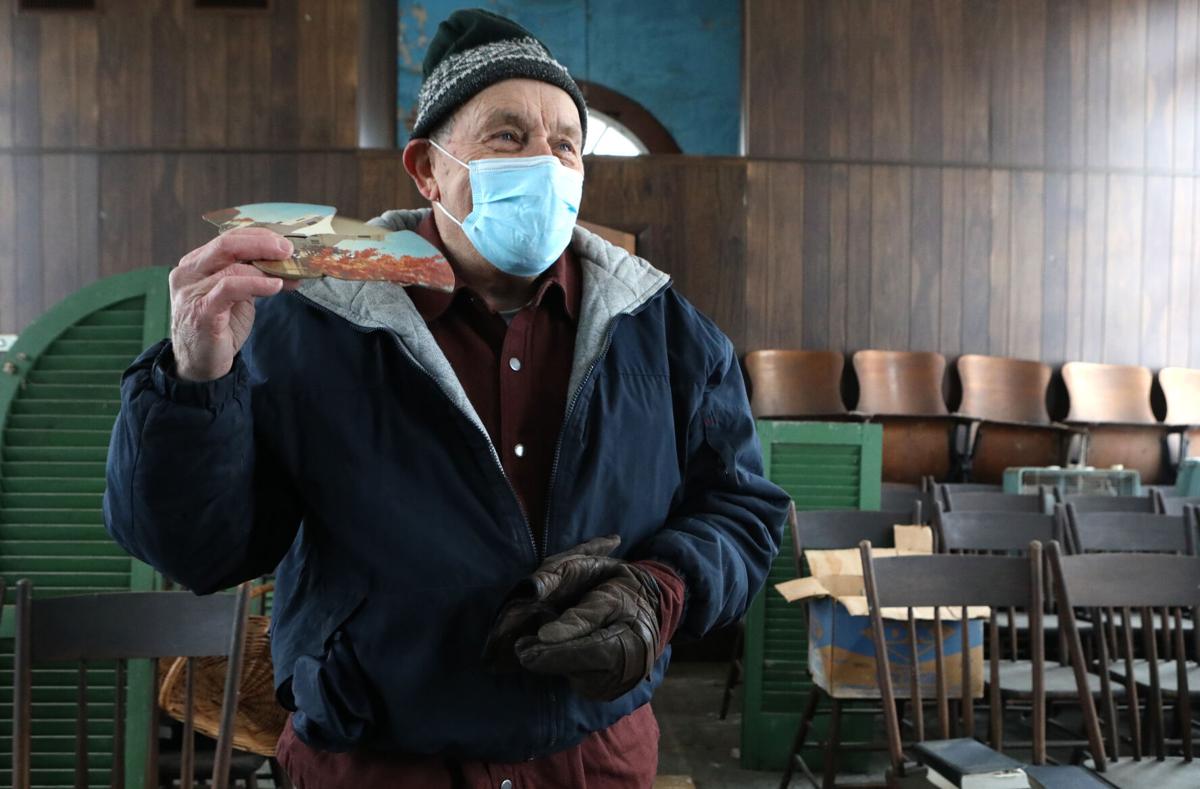 David Menke, president of the New Haven Preservation Society, fans himself with a fan left in the Anna Bell Chapel Wednesday, Feb. 10. The fans were used to keep congregants cool on hot days. 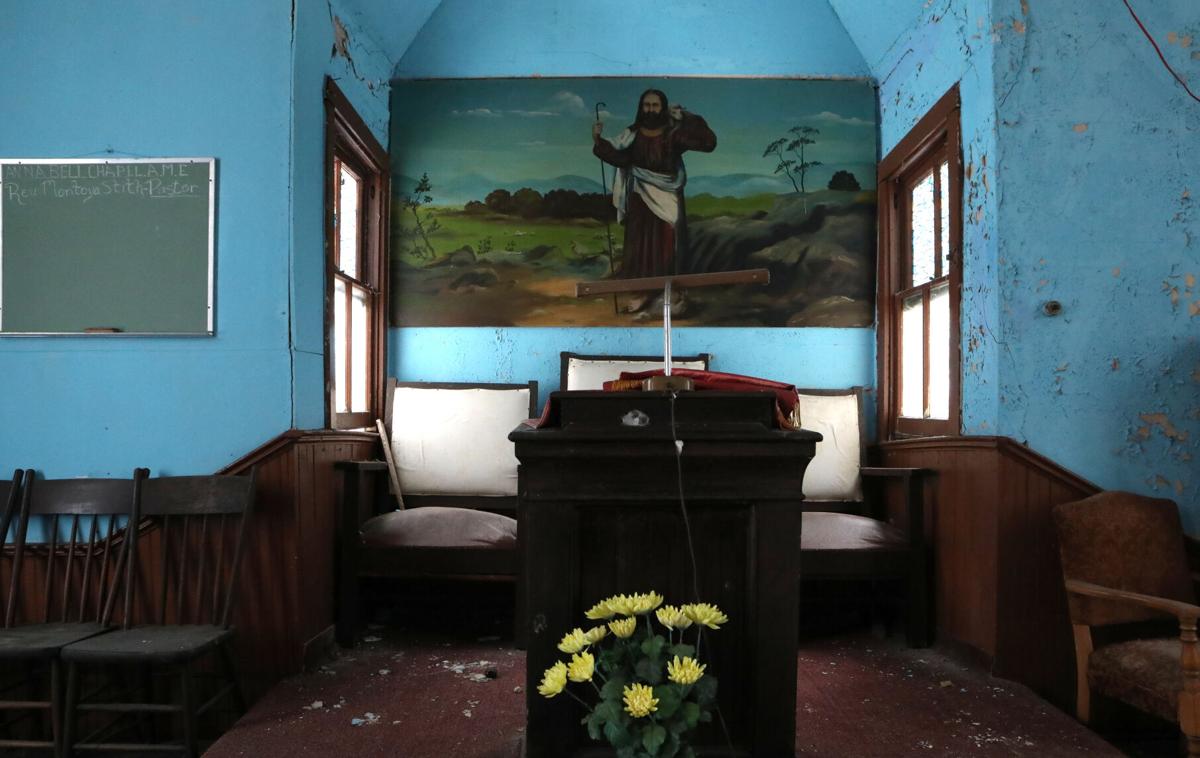 Pictured is the pulpit of Anna Bell Chapel in New Haven Wednesday, Feb. 10. After the chapel is moved to downtown New Haven, the town’s preservation society plans to restore the building. 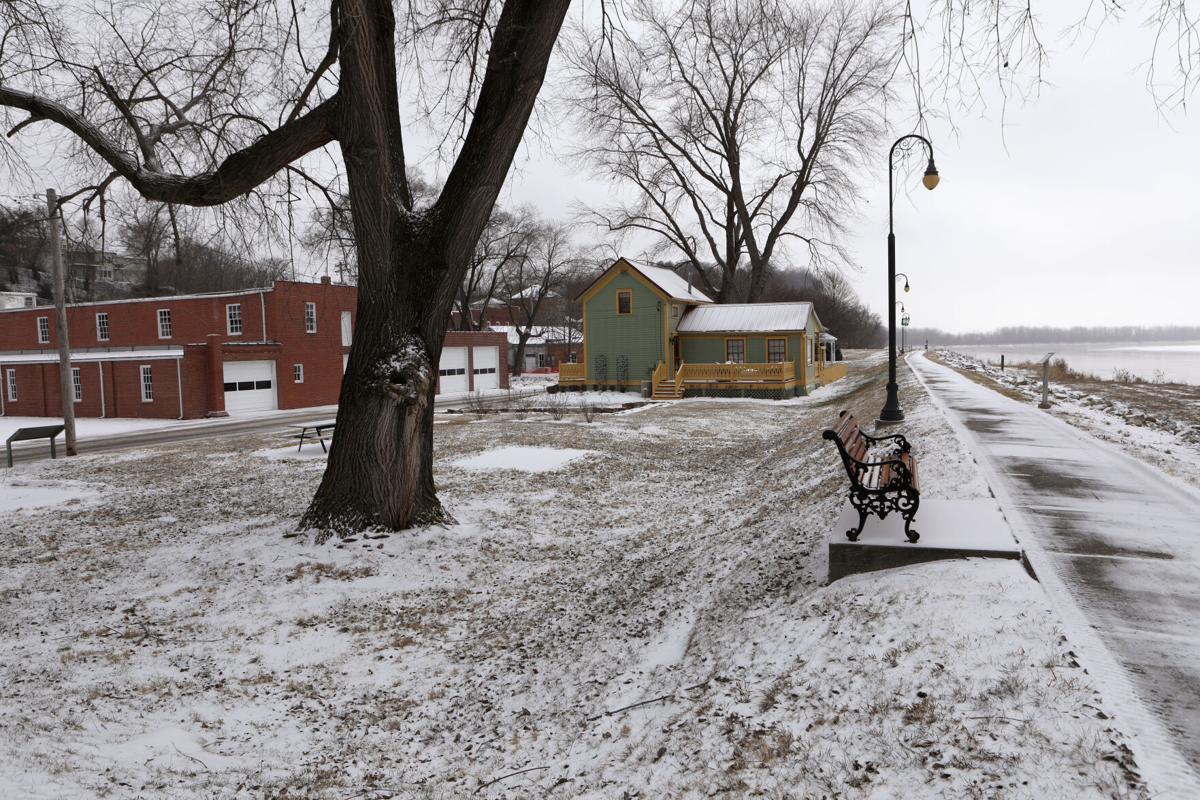 Pictured is the spot along Main Street, near the John Colter Memorial, in New Haven, where the Anna Bell Chapel is expected to be moved to. The Chapel’s planned resting spot is where the tree is currently located. 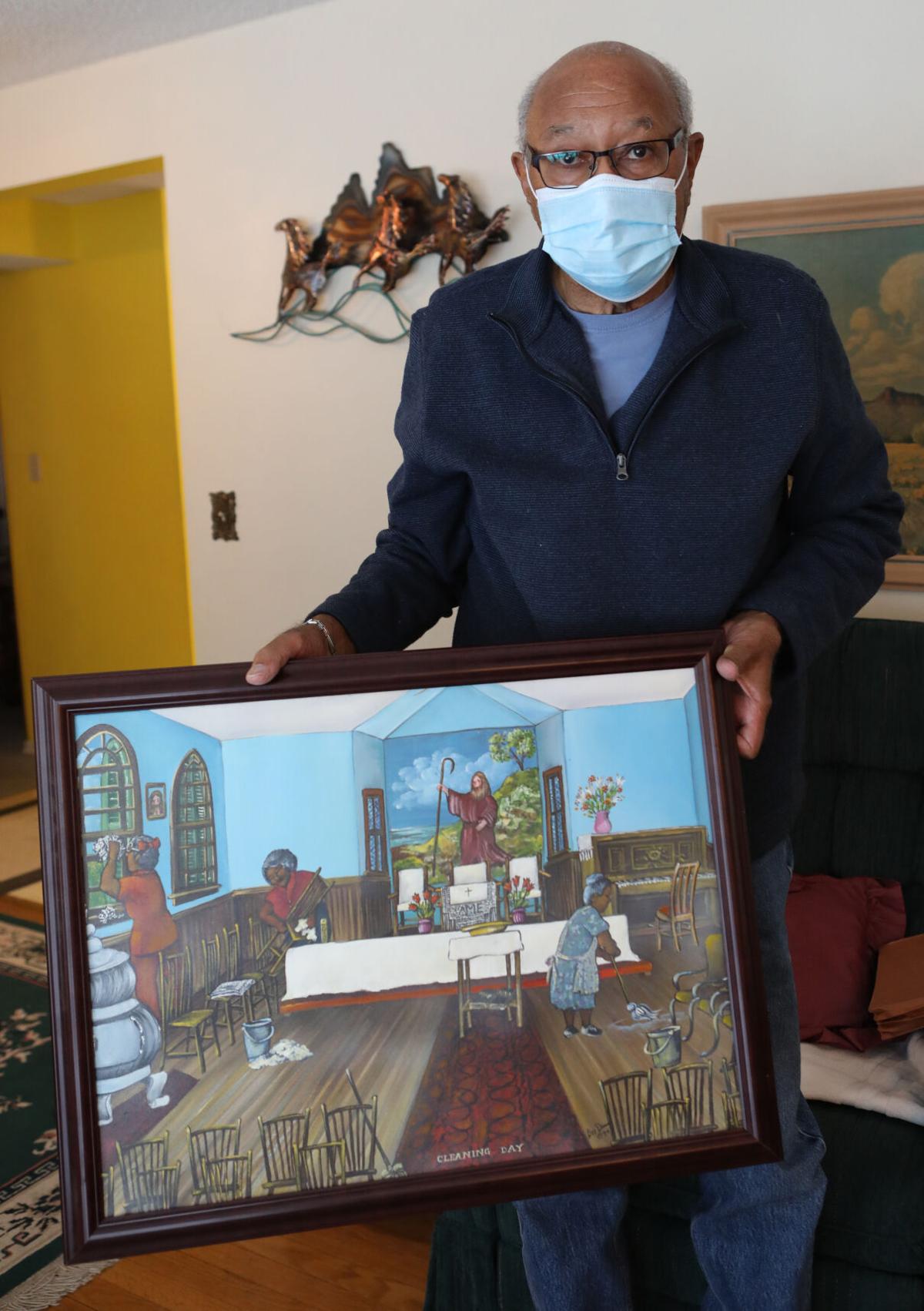 David Smith holds a painting, created by Dee Dann, depicting the inside of Anna Bell Chapel being cleaned in his home Wednesday Feb. 10.

Affixed atop one of the bluffs overlooking the Missouri River near New Haven is an unassuming 24x30 white A-frame chapel.

The walls of the simple chapel have borne witness to more than 150 years of history, including weddings, baptisms, infant dedications, funerals and other major milestones in the lives of the congregation members.

Today, the chapel on Selma Street represents one of New Haven’s last physical reminders of a bygone era when dozens of African American families lived nearby.

Although it’s been almost 15 years since the church’s last member died, and nearly 116 years since its namesake, a former slave who helped found the church, died, the Anna Bell Chapel remains almost as it was left in the late 1980s to early ’90s. A dusty wooden piano still hums a strong, albeit out-of-tune, C major. A box of hymnals show the wear not only of time, but also of use. And a striking painting of Jesus done by area artist Dee Dann remains a colorful centerpiece of the chapel, which in 1992 became the only building in New Haven to be included on the National Register of Historic Places.

Today, preserving that history is a main goal of the New Haven Preservation Society. Its members hope to move the church to a more prominent location in town, restore it to its former glory and use it to highlight Black history in their own community.

The push is being led by David Menke, president of the Preservation Society, David Smith, who attended the church as a child, and dozens of other New Haven city leaders.

“We knew the building had been vacant and was deteriorating,” said Menke. “We knew something needed to be done. The idea (with relocating) is that maybe the building could be more visible to people, and the history of the African American community could be better expressed.”

The most likely new home for the Anna Bell Chapel is a lot along the riverwalk, between two historic homes dating to the 1870s. Menke hopes the chapel, which seats around 50 to 75 people, can be used for church services, town meetings, weddings and as a museum honoring New Haven’s Black history.

The chapel is one of two surviving historic Black churches in Franklin County. The other, Washington’s St. John’s African Methodist Episcopal Church, was similarly restored in the mid-2000s and now houses an archive of Franklin County records.

The cost of the New Haven project is projected at $150,000. A fundraising effort was officially launched this past week and pledge cards are being mailed to supporters of the society. The Preservation Society donated the first $10,000 and is hopeful that donations from the New Haven area and beyond can save the historic Anna Bell Chapel.

Who Was Anna Bell?

The congregation dates back to 1865, when a group of former slaves worshiped in a small log cabin chapel in Etlah, an unincorporated area west of New Haven. The church was nestled into the Missouri River bottoms, which made flooding a constant threat. One of the church’s members, Anna Bell, began collecting donations from white residents of the area to pay for the church to relocate six miles to a river bluff in New Haven.

Menke explained it’s hard for us to imagine today how difficult it’d be for a former slave to convince white families to donate to a Black church, but other historical documents show Anna Bell, nee Terry, was used to breaking barriers. Born in 1826, she was enslaved in Montgomery County for almost 35 years and moved to the New Haven area after the Civil War. She had learned at some point how to read and write, and she was able to purchase for herself almost 43 acres of land in Boeuf Township. She had seven children, three of whom were living at the 1900 census. It’s unclear whether any of the other four were sold to other slaveowners. The census also lists her as married to Ned Bell for 32 years. She had previously been married to a man with the surname Pryor. At the time she started raising money for the church, she was in her late 60s.

Local lore says the church building was moved by a mule team in 1878. Menke says it’s not clear whether the church actually moved or a new one was built. The current structure dates back to 1893, and Anna Bell is among the trustees who signed the building contract July 6, 1893. With the exception of a small addition to the back to fit an indoor bathroom and an HVAC system, the church remains almost identical to what Anna Bell and the other congregation members would have worshipped in.

Anna Bell died in 1905, but her legacy lived on in the chapel on the bluff. One of the last few living members of the church, Luella Pryor, was Anna Bell’s grand-daughter-in-law. She told The Missourian in 1990 that she recalled sharing stories about Anna Bell at Sunday luncheons following services, and in 1980 the church held a 115th anniversary celebration in honor of the congregation’s establishment in Etlah and of Anna Bell.

Although David Smith is now in his early 80s, his memories of attending Anna Bell Chapel as a child are vivid. His grandfather, who was a deacon, always sat on the far left in the front and would periodically toss coal into the potbellied stove that heated the church in the winter. In the summer, Smith could gaze out the window and see the Missouri River peaking out from behind the trees.

The chapel overlooks Olive Street Valley, where historically many of New Haven’s African American families lived. The families, including Smith’s, would trek up the steep hill to the chapel every other Sunday, summer or winter, rain or shine.

“(People) had to wear white gloves and had to have a suit,” Smith remembered. “Everybody wore a suit.”

The congregation had no official choir, but a few strong voices including Smith’s Aunt Mercily could always be heard during the group songs. Services were held on the second and fourth Sundays of each month, as on the first and third the pastor served Washington’s AME church. Afternoons following the service were usually spent enjoying a meal at a member’s house. Smith remembers the pastor being particularly fond of his grandma’s lemon pie, so often his family played host.

The church community was a constant in a time of many changes for the Smiths. Because most businesses at the time refused to hire Black workers, Smith said his dad went to Detroit to find work and sent money back to his wife and three children. His older brother, Aaron, became one of six students to integrate New Haven Senior High School after the U.S. Supreme Court struck down school segregation in 1954, and he was later its first African American graduate. David Smith rode the train each day to Sumner High School in St. Louis, the first high school for African-American students west of the Mississippi River.

Menke said the importance of the church in the lives of its members cannot be overstated. In an upcoming book he’s writing on the history of African Americans in New Haven, he explains, “During the days of segregated society, the church was a place of refuge, a safe place, away from the fear of retribution. It was a place of hope and salvation.”

As an adult, Smith moved away from the New Haven area for work. He occasionally visited the chapel when he returned to see family. Several other families in the congregation also moved out of New Haven. Some died. Others switched parishes. By 1990, its 125th anniversary, the church had stopped holding regular services and had only a few surviving members. The chapel became dormant.

In 1992, the Preservation Society succeeded in getting Anna Bell Chapel onto the National Register of Historic Places. The document of approval says the church “represents one of the few public institutions in Missouri which expresses the state’s legacy of black history. … the church became the ‘womb of Black culture’ affirming an African American heritage.”

The same year, David Smith’s son Jason chose restoring Anna Bell as his Eagle Scout project. He cleaned the facility, made a wooden welcome sign that still rests outside the chapel and planted a tall tree.

From the mid-1990s until 2006, Anna Bell Chapel’s sole surviving member was Hazel Hinkle, David Smith’s aunt. Hinkle paid insurance and utilities on the church building until her death, and a plaque outside the door honors her as the last member.

After Hinkle’s death, Smith, who had since moved back to New Haven with his late wife, Joyce, took over finances for the church. He knows many other people would have let the building fall into disrepair, but for him it’s too important.