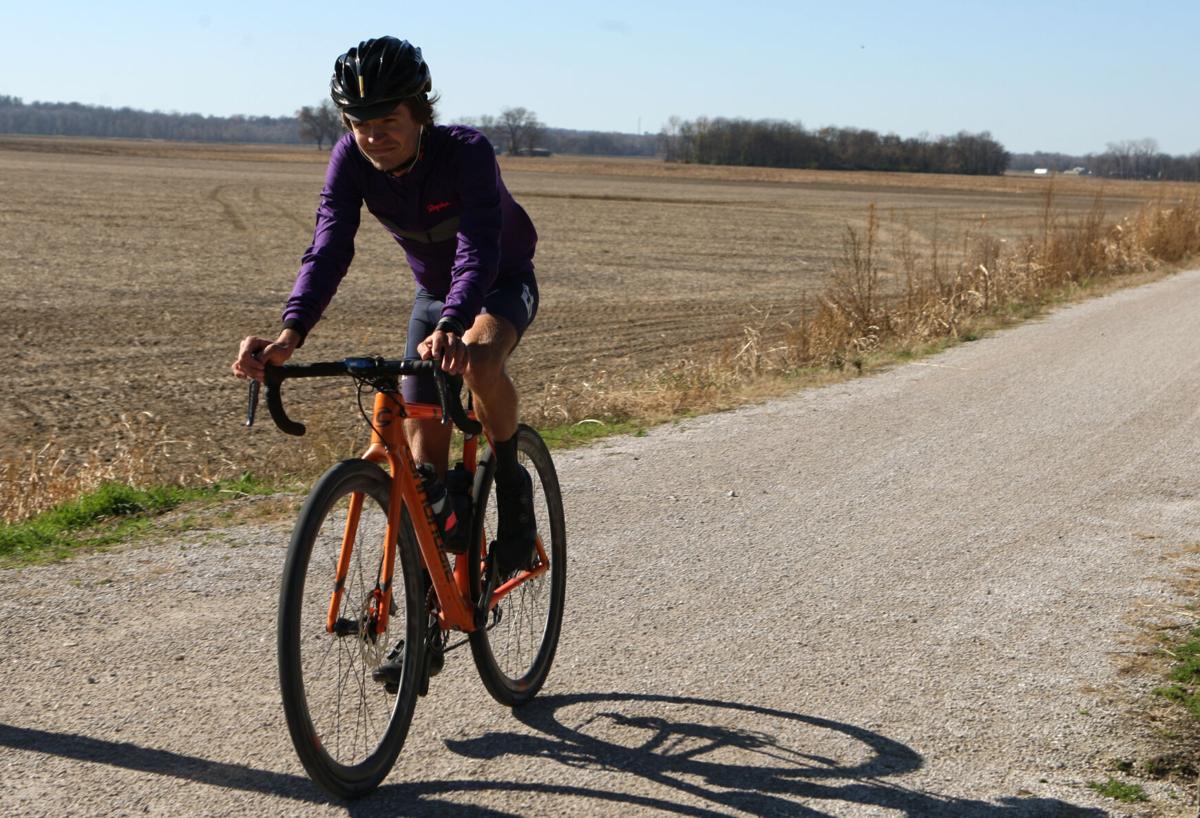 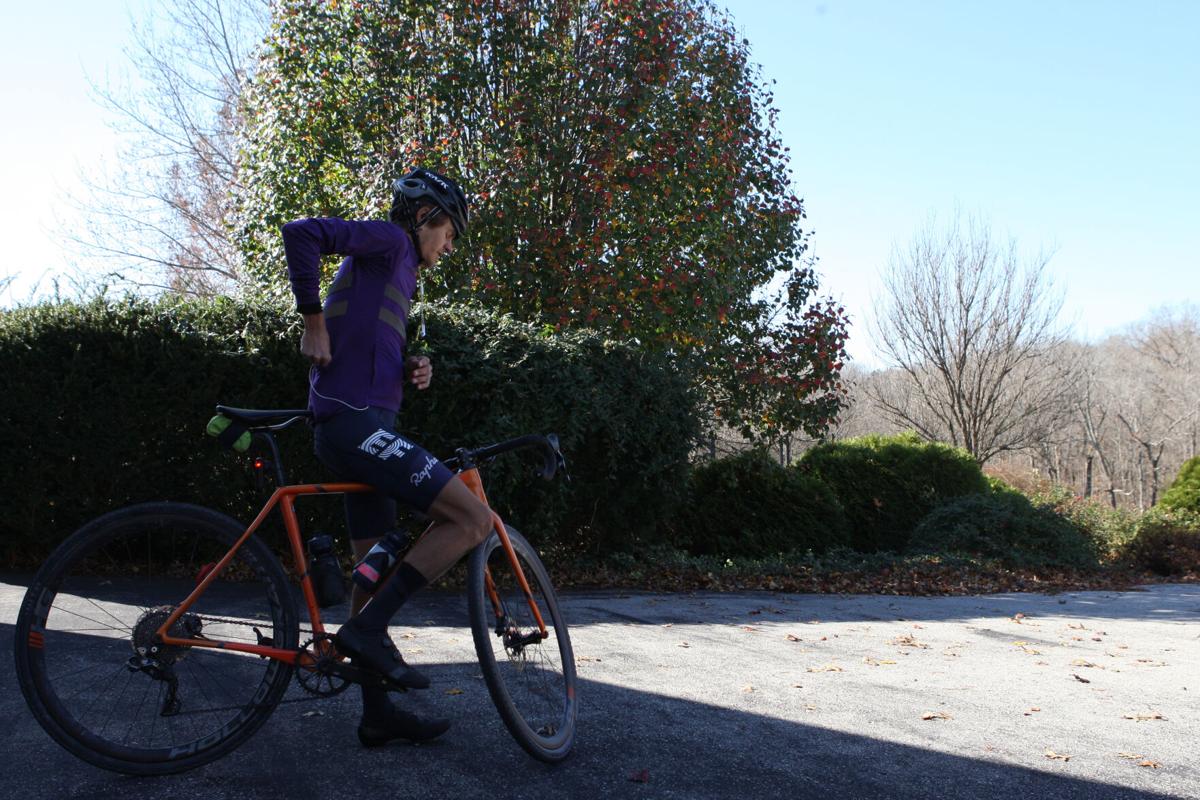 Luke Davis prepares for a bike ride at his home in Marthasville Wednesday, Nov. 11. 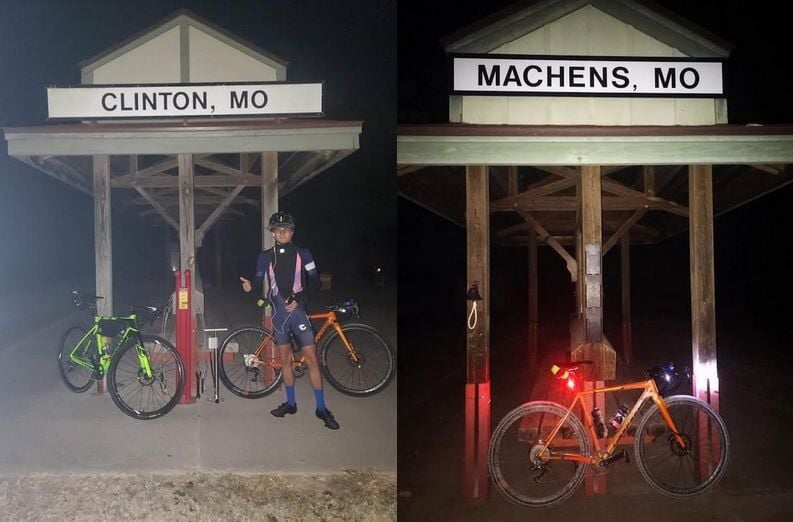 Left, is Luke Davis standing with his and Mauricio Tijerina's bikes before the duo began their ride across Missouri Saturday, Oct. 10. On the right, is Luke Davis' bike after completing a rode across the entire length of the Katy Trail in one day. 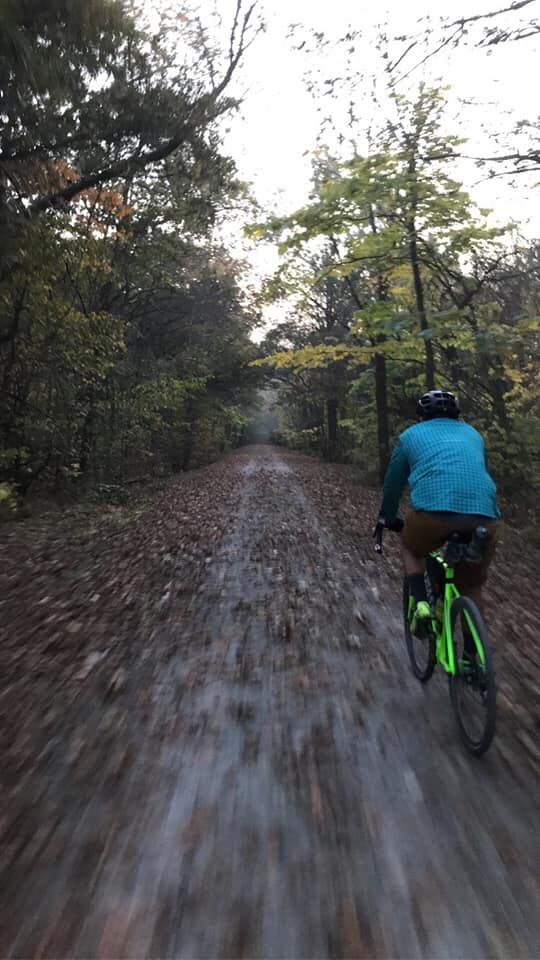 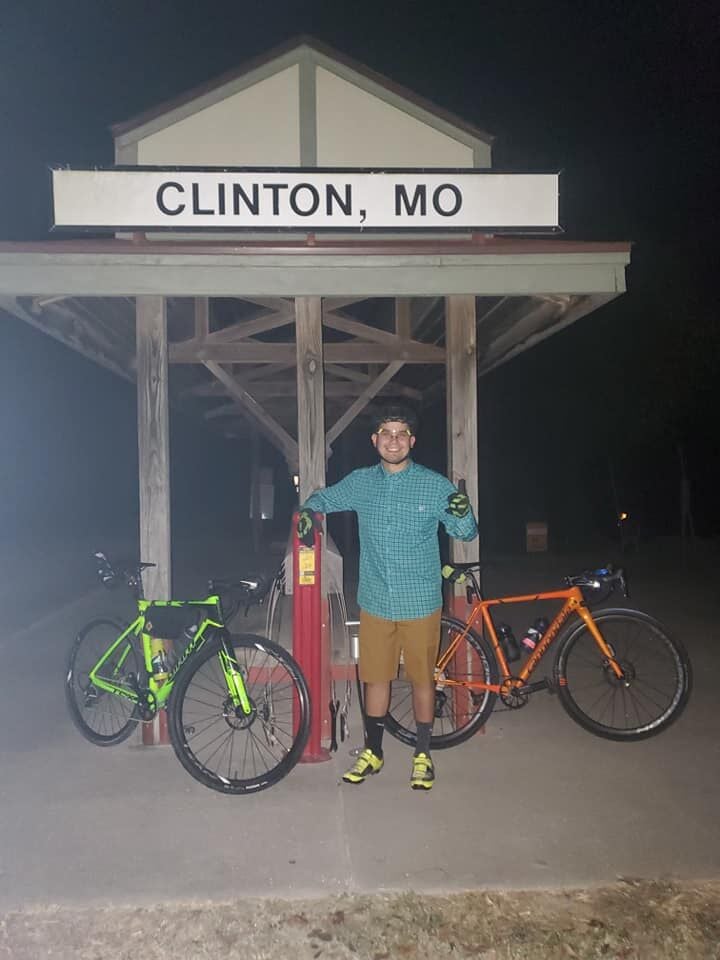 Mauricio Tijerina stands at the the Clinton rest stop along the Katy Trail Saturday, Oct. 10. Tijerina began biking across Missouri with Luke Davis but didn't complete the whole ride that day.

Luke Davis prepares for a bike ride at his home in Marthasville Wednesday, Nov. 11.

Left, is Luke Davis standing with his and Mauricio Tijerina's bikes before the duo began their ride across Missouri Saturday, Oct. 10. On the right, is Luke Davis' bike after completing a rode across the entire length of the Katy Trail in one day.

Mauricio Tijerina stands at the the Clinton rest stop along the Katy Trail Saturday, Oct. 10. Tijerina began biking across Missouri with Luke Davis but didn't complete the whole ride that day.

Luke Davis dreamt about this moment for three years — maybe longer. In fact, the night before his trek across Missouri, the Marthasville man could hardly sleep.

His mind raced, his body filled with jitters, adrenaline coursed through his veins as he reflected upon the seemingly countless hours of training and visualized how the next day’s 240-mile journey from Clinton to Machens would transpire.

Just when it seemed that sleep may come, the alarm clock on the bedside table sounded — it was 3:50 a.m. and it was time to ride.

Together with friend Mauricio Tijerina, of Washington, Davis arrived at the Katy Trail trailhead near Clinton just before 4 a.m.

In the crisp air of a Missouri morning, the pair clicked the straps of their helmets together, gripped the handlebars of their bicycles and with a slight push of their toes against the finely crushed gravel, they set off into the seemingly endless black sky.

Although Davis, 25, was setting off to become one of the only area residents to ever bike the entire length of the Katy Trail in less than 24 hours, at that point the only destination on his and Tijerina’s minds was Pilot Grove, a town in northern Cooper County, about 60 miles east of Clinton and their first planned stop.

At 240 miles with access points in nearly 30 Missouri towns, the mammoth trail rivals only the Missouri River and Interstate 70 for the title of “most thorough thoroughfare” across the state.

While the trail attracts around 400,000 visitors each year to bike, hike, walk or run, the number who have successfully biked its full length in one day stands at just over 30.

Exactly 15 hours, 32 minutes and 20 seconds after setting off from Clinton Saturday, Oct. 10, Davis joined their ranks.

“Riding the whole trail in a day was a three-year obsession,” Davis said. “I always had it in the back of my mind as something I wanted to do.”

Davis has been riding bikes so long he doesn’t remember when or how he started. His dad, Paul Davis, also loves biking and would often ride with him around his hometown of Marshfield, outside of Springfield. If he wasn’t available, mom Joni Davis would keep an eye on the biking child while she walked. After his family moved to Marthasville in sixth grade, Davis continued to ride semi-regularly until he turned 16 and eagerly traded two wheels for four when he got his driver’s license.

The day he rediscovered his love of biking was also the first day he ever rode the Katy Trail. While a student at Washington High School, he and some friends decided on a whim to try to bike the distance from Marthasville to Jefferson City, roughly 70 miles.

“It was one of those things where (we) just wonder if we can,” he said. “The following weekend, we loaded up some backpacks and got on our junky mountain bikes.”

Soon after that trip, Davis started riding pieces of the trail several times a week after school, first on his dad’s nicer bike and then on one he purchased.

But the miles he put on then pale in comparison to the stats he’s reached this year. The 240 miles of Katy Trail completed Oct. 10, are just a few of the approximately 12,000 miles Davis is on track to bike in 2020. That’s three times as long as the Amazon River and twice as long as the entire length of the Great Wall of China. The avid biker has 15 to 20 regular routes around town and on nearby trails, and he bikes 200 to 400 miles per week during five to six rides. On a normal day, he’s pedaling for anywhere from two to seven hours.

“I ride all over, definitely not exclusively the Katy,” Davis said. “But the Katy is a great access point to some other routes in the area.”

Among his frequent day-trip destinations are Augusta, Hermann and St. Charles, where he enjoys stopping at the Bike Stop Cafe. He often rides alone, but it’s also not uncommon to see him riding alongside Tijerina or a few of the other long-distance bikers in the area.

Davis and Tijerina began preparing for the 240-mile ride about a week before by making sure they were eating nutritious foods and drinking more water than usual. The night before the ride, Paul Davis drove the two men to Clinton, a more than three-hour journey from Franklin County even by car. Like Davis, Tijerina had been riding six days per week for months to prepare for the day-long ride, often traveling around 100 miles per trip. Physically, the pair was as ready as they could be.

For Tijerina, 30, it was not the first time he’d attempted a challenging feat just because someone said he couldn’t.

Tijerina, who was born in Mexico and moved to Washington four years ago, said he decided years ago that he wanted to complete an Ironman Triathlon.

“Back in Mexico, I trained with a team, and I told the head coach I wanted to do an Ironman. At that time I was a bigger weight and completely unathletic,” Tijerina said. “He kind of laughed. It started like that, and then I got hooked.”

Within a year Tijerina had completed a half Ironman. The next year he checked off a full.

But on that early morning, all he was thinking about was the trail. Both men’s jerseys were stuffed with their snacks of choice, power bars and bananas, and their water bottles, which long-distance bikers are recommended to drink from every 15 minutes, were full.

“The first three to four hours were pitch black,” Tijerina said. “It was cold, but this was a portion (of the Katy) I’d never ridden before so I was just enjoying the ride.”

The western section of the trail traverses prairie fields and rolling hills. Racing along on their bikes, the men passed a longhorn cattle ranch and a series of rural towns.

They reached Sedalia as the sun was coming up at around 6:45 a.m. and continued onto Pilot Grove, the first planned stop. They bought doughnuts and water at Casey’s convenience store before continuing east. Missouri’s famous rolling hills are never more present on the trail than at a 20-mile stretch around California, where the elevation jumps from just over 800 feet to nearly 1,900 feet and then back down to around 800 feet.

“Most people think the Katy Trail is completely flat,” Davis laughed, “but there’s definitely a section where it goes up and back down.”

By the time the men crossed to the north side of the Missouri River in Boonville and reached their second planned stop, Cooper’s Landing, outside of Columbia, around noon, the scenery had changed dramatically.

“Once (the trail) meets up with the river, you’ve got water on one side and limestone bluffs on the other,” Davis said. The sun had also fully risen, its warmth splashing on both their faces as they rode still further east.

At the Jefferson City trailhead, Tijerina realized his body was no longer cooperating.

“About (at) the eight-hour mark is when things started to fall apart,” Tijerina said. “It was hot, and I was getting tired. I wanted to eat, but my body did not want any food.” He remembers lying on a bench considering whether he’d be able to continue the trip. He and Davis decided to ride on, reaching Portland, a small unincorporated community on the southeastern tip of Callaway County, at around 4:45 p.m. They’d traveled nearly 150 miles in 12 and a half hours at that point, and they still had another 90 to reach the trail’s end.

“I told (Luke), ‘I know my way back, and I don’t want to hold you up,’ ” Tijerina said. Tijerina rode on alone another 30 miles, with a vibrant sunset for a backdrop, to a small market in Treloar. There he scarfed down a ham sandwich and soda and texted his wife, Veronica, to pick him up. She brought him a shake full of carbs and proteins so he could start to repair the strain to his body.

Miles to Go Before I Sleep

After splitting up, Davis continued east alone, arriving at his home in Marthasville around 8 p.m., right as the sun was setting. His parents and girlfriend, Maggie Swoboda, were waiting to greet him as he enjoyed a brief rest. Of all the tough moments he’d encountered thus far, he said that, feet away from his shower and bed, was the hardest to continue past. He didn’t give in.

“Being obsessed with completing this for three years, I didn’t want to get so close and not finish.”

He again was riding in the dark, this time with only the beam of his headlight for company. While this stretch was one he’d rode hundreds of times before, the exhaustion — physically and mentally — threatened him more than once.

“I kept repeating this quote to myself the last 50 miles in the dark from my favorite pro rider (Lachlan Morton), ‘The dark moments fade, but if you give into them they last forever.’ It 100 percent helped me push through the last stretch, and with all the madness in the world right now, I feel like maybe people would find a little comfort in that quote,” Davis said.

He rolled up to the end of the trail, an unassuming field in Machens, at almost 10 p.m.

“My mind was numb that night. It was kind of a blur of exhaustion and hunger and wanting to go to bed,” he said. “It didn’t sink in until the next day.”

Davis tiredly got in his girlfriend’s car, who had come to pick him up, and headed for home. She’d brought a smoothie for the trip home, and once in Marthasville Davis feasted on one of his favorite dishes, Mexican rice and beans, which his mom had cooked for the occasion. He also made an omelet and had some yogurt with granola.

“Honestly, I was just shoveling food in,” he said.

Not one to miss an opportunity to bike, Davis rode 15 miles the next day.

“I just wanted to make sure everything still worked,” he laughed.

Eric Ferguson of Revolution Cycles, a Washington bike shop where Davis used to work and frequently gets his Canondale SuperX repaired, said he hopes Davis and Tijerina will do Race Across America, an annual 3,000-mile ride from the West to East Coast that is about 700 miles longer than the Tour de France, sometime in the next few years.

“Luke is a guy who will ride 100 miles a day just for fun. Mauricio too,” Ferguson said. “They put in crazy miles.”

Since completing the one-day Katy Trail ride, Davis also said the bug for ultradistance rides has only gotten stronger.

Tijerina is not surprised by this.

He said, “Luke puts more miles on his bicycle than his car.”