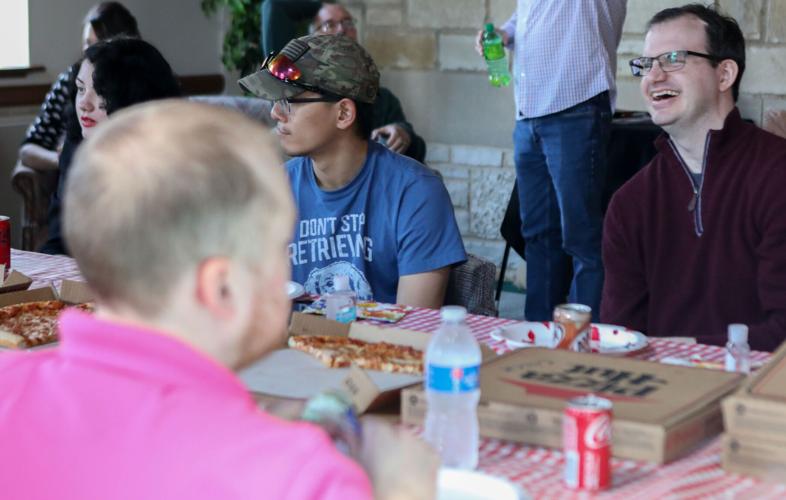 Dane Buschling, right, laughs as he talks with other Brain Buddies members March 19 over a pizza lunch. After his brain injury six years ago, Buschling and his parents formed Brain Buddies as a social and advocacy group for young adults who have experienced traumatic brain injuries. 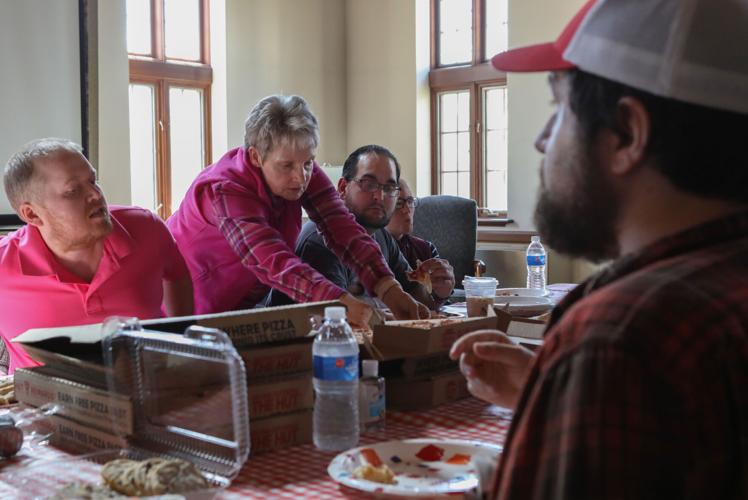 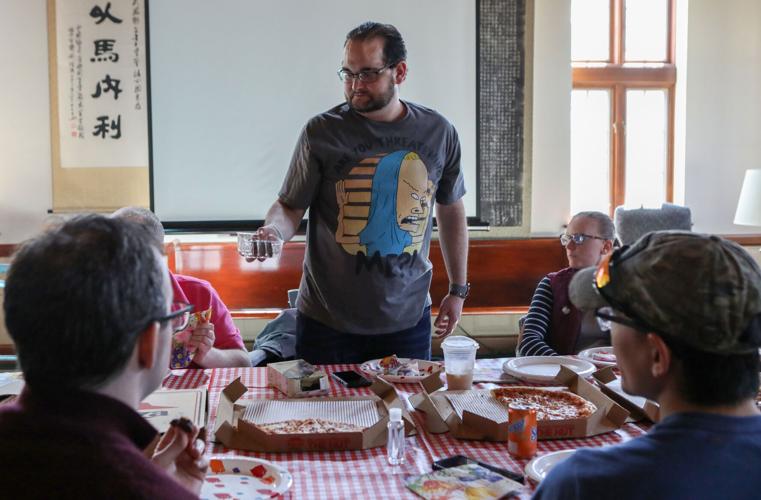 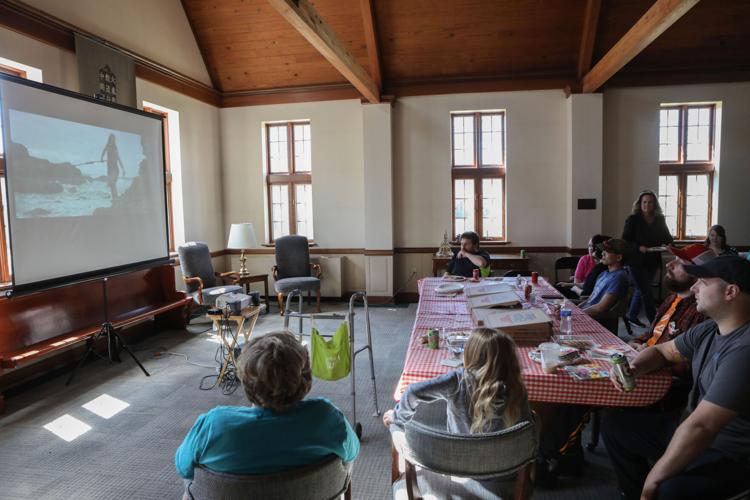 Brain Buddies members and their companions watch a screening of Marvel’s “Eternals” March 19 at Samuel United Church of Christ in Clayton. The monthly meetings have included a variety of activities aside from pizza and movies, including ax throwing, craft nights and Cardinals games. 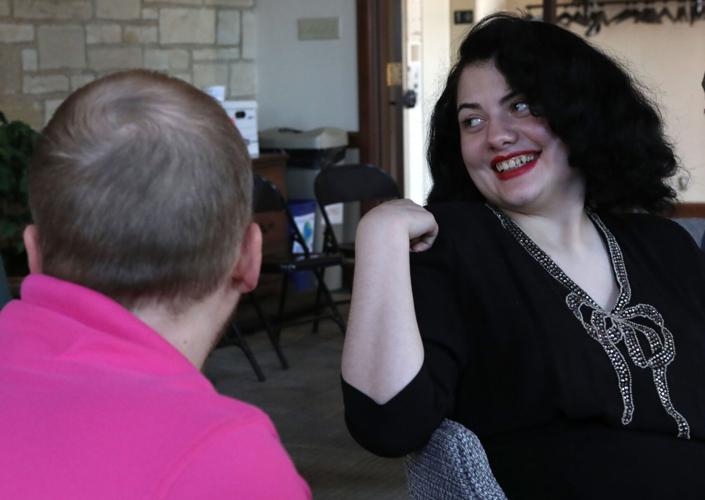 Dane Buschling, right, laughs as he talks with other Brain Buddies members March 19 over a pizza lunch. After his brain injury six years ago, Buschling and his parents formed Brain Buddies as a social and advocacy group for young adults who have experienced traumatic brain injuries.

Brain Buddies members and their companions watch a screening of Marvel’s “Eternals” March 19 at Samuel United Church of Christ in Clayton. The monthly meetings have included a variety of activities aside from pizza and movies, including ax throwing, craft nights and Cardinals games.

The last six years have been full of twists, turns, ups and downs, but Tammie Buschling is just grateful to have her eldest son, Dane.

“We know we are one of the lucky ones,” said Buschling, who moved to Washington with her husband, Randy, and two sons, Dane and Josh Buschling in 1998. “We are grateful to still have his wit, to hear his laugh, to have him sitting around the table at the holidays, because the alternative would be to see an empty chair. We are forever grateful, but I still rue the day this happened.”

Dane Buschling, then 27, was an attorney with a high-profile real estate development and holdings company in St. Louis. The Washington High School graduate was out to dinner with some friends at a St. Louis restaurant when he left the noisy restaurant to take a phone call.

Moments later, the man who had crisscrossed the globe as a foreign exchange student, was found on the sidewalk by a stranger. Doctors would later discover he suffered a fractured skull and severed artery, causing a significant brain bleed and a traumatic brain injury after what they described as an “unwitnessed fall.”

More than 223,000 Americans suffer traumatic brain injuries requiring hospitalizations each year, according to the U.S. Centers for Disease Control and Prevention.

Doctors at Barnes-Jewish Hospital tried to prepare Randy and Tammie Buschling for the worst. They somberly told the Buschlings that if Dane survived the surgeries that he would likely never walk again and would likely live the remainder of his days bedridden in a nursing home.

Tammie Buschling said she “refused to accept that what they were saying was going to be my son’s fate.”

Minutes after being discovered, Dane Buschling was in an operating room, where surgeons removed part of his skull in hopes of giving his brain enough room to swell without causing further injury.

“He was full of tubes, on a ventilator. He was in a deep coma and all we could do was to wait,” Tammie Buschling said. She said the experience of seeing her son in a coma is far from the portrayals of comas seen in movies and television. As the days turned into weeks, the Buschlings used that time to research different medical options for what they hoped would lead to their son’s recovery.

“He had a 5 percent chance of living. But the odds don’t matter. They don’t mean anything when it is your child. You disregard them, no matter how much they are against you. You disregard them,” Tammie Buschling said of her son who spent three weeks at Barnes-Jewish Hospital in St. Louis, nearly four weeks at Kindred Hospital in Denver and was in and out of Craig Hospital in Englewood, Colorado, for more than a year.

He also dreams of one day being able to return to a profession he loves, to live independent of a care giver, to drive a car and maybe, one day, to marry.

Tammie Buschling, a retired engineer, said his first words since his fall were to his paternal grandfather and came in the form of a shaky “hello” within days of his arrival at Kindred Hospital. Buschling equated that hello to hearing his first words as a toddler.

She said her son’s personality has largely remained unchanged.

“He is still that same witty person, just like when he was a teenager,” Tammie Buschling said.

Dane Buschling said his parents’ drive and unwavering support empowered him to believe a recovery was possible.

The support also motivated him to help others, which led the family in 2018 to found Brain Buddies in hopes of providing a social and advocacy group for adults between the ages of 20 and 40 years old who are rebuilding their lives after experiencing some form of traumatic brain injury.

“I am where I am today because my parents were such strong advocates for me,” Dane Buschling said. Tammie Buschling said the organization started with about six members and has now grown to include more than 25 people. The group was recognized in 2020 by Craig Hospital with its Impact Award.

The organization has a board of directors, but the group’s monthly membership meetings are largely led by the individuals recovering from the brain injuries. To date, the group has met for a variety of outings, including movie screenings, ax throwing, craft night, arcade outings, and attending a St. Louis Cardinals game.

Tammie Buschling said she never imagined that the group would grow so quickly.

“When we started Brain Buddies we thought it would be nice for these young adults to be able to get together, doing things they normally would do but all while not having to worry about anyone judging them,” she said. “It is a safe space for everyone.”

Dane Buschling said the group’s commitment of tolerance and empathy stems from his experiences as a foreign exchange student living with a host family in Australia’s Gold Coast; Cork, Ireland; Hong Kong, and in Moscow, Russia.

“Being welcomed into someone’s home, being taken in when you’re unfamiliar with a culture has an impact on you,” Dane Buschling said. “Brain Buddies is like that, or at least we try to be a place of empathy and understanding.”

As the group continues to grow, the Buschlings said the organization is looking toward fundraising and advocacy opportunities.

“Many of our members live on Social Security and disability, which doesn’t pay very much,” Tammie Buschling said. “Our group is all about enriching their lives, so I don’t want anyone to not be able to pay $50 to go and experience the Fox Theater.

“We’d also like to raise money because transportation to our social events can be a burden for some, especially since many will never be able to drive,” she said.

“It is incredibly expensive to do everything that needs to be done to recover from a brain injury, and a lot of things are considered too cutting-edge to be covered by insurance,” Tammie Buschling said.

“All we want people to know is that suffering a traumatic brain injury is not a death sentence. Yes, a lot of people do die from them, but there is also hope for those who survive,” Tammie Buschling said. “We’re living proof that you can pick up the pieces, embrace the changes that life brings and that you can live a productive life again.”