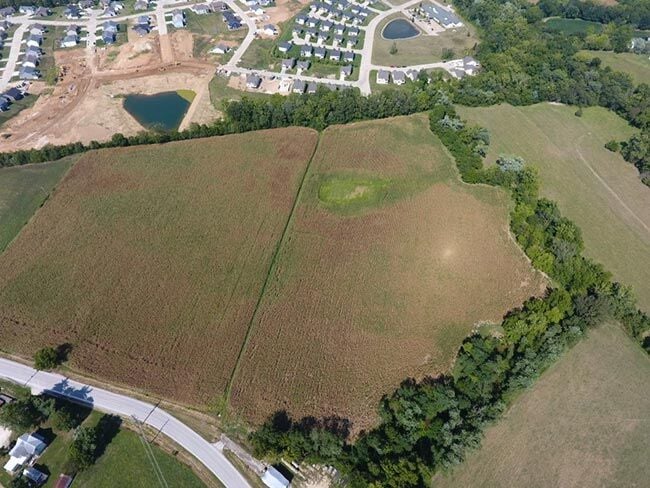 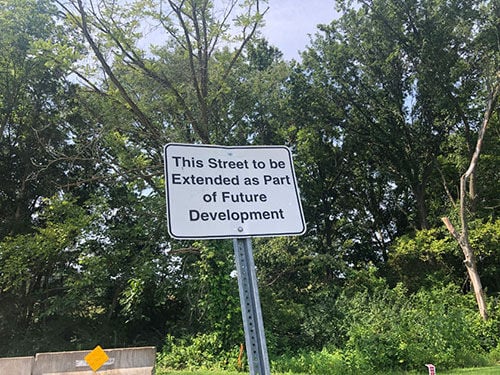 With the upcoming auction of a large part of the Koch farm, family members and the city of Washington anticipate the land could be used in the future to connect Rabbit Trail Drive to Bieker Road. 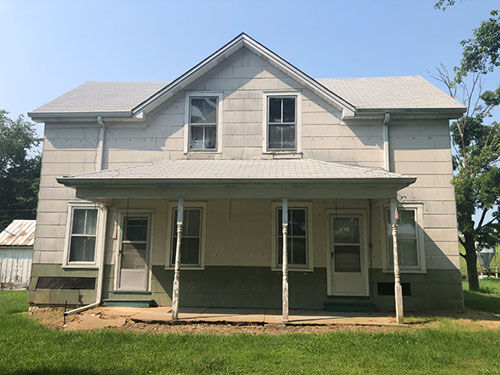 Pictured is the Koch Homestead, which has housed four generations of Bieker and Koch family members since the early 1900s. The house is located on one of the tracts of land that will be up for auction Nov. 10.

With the upcoming auction of a large part of the Koch farm, family members and the city of Washington anticipate the land could be used in the future to connect Rabbit Trail Drive to Bieker Road.

Pictured is the Koch Homestead, which has housed four generations of Bieker and Koch family members since the early 1900s. The house is located on one of the tracts of land that will be up for auction Nov. 10.

Sitting in a circle outside the two-story white farmhouse that has belonged at different times to their parents, grandparents and great-grandparents, four of the five Koch siblings recently shared memories of the structure, of the surrounding corn and cattle fields that have been the backdrop of much of their lives and of the family members who called it all home. The siblings, now nearly in their 60s and 70s, soaked in the sights, sounds and scents of their historic family farm for likely one of their last times as its owners.

On Nov. 10, just over 85 acres of the farm will be up for public sale for the first time in over a century, through Wheeler Auctions and Real Estate. Four of the five Koch children hope to sell their pieces of the farm, which was divided among the five of them around 1989 by their parents, Roy and Marie Koch. The five children — Tom Koch, Roger Koch, Jeanne Koch Hoelscher, Rita Koch Scheib and Mark Koch — are the fourth generation to have farmed the land just south of Highway 100 and east of Highway 47. The seventh generation of the family recently showed livestock at the Washington Town & Country Fair.

Theirs is one of the last family-owned farms in an area of Washington that has transformed in recent decades with the growth of the city. The four who plan to sell anticipate the land likely becoming a site of new developments as Rabbit Trail Drive is expected to expand there to connect to Bieker Road. As the St. Louis metro region expands and as economic opportunities in Washington multiply, farms like theirs are often a cost of that growth.

“It’s a shame we’re that close to Washington,” Roger said. “It’s a great town. It’s grown quite a bit, but you still have that country feeling. And that’s the reason people want to move here.”

The five siblings recall a childhood spent in the fields with their parents, running cattle, driving tractors and growing food in the garden. Their mother, Marie, planted daffodils that bloomed bright yellow each spring along the front of the house. They were close with their grandparents, John and Matilda Bieker, who lived on the farm until their passing, as well as with other relatives, including their mom’s sister Lucille and their great-uncle Cap.

Marie had grown up on the land and met her husband, Roy, while he was working on a neighboring farm. Marie’s relatives had purchased the farm in 1884 for $2,500 shortly after immigrating from Germany. The gravel road winding through the homesteads was called Duncan Dairy Road for the many dairy farms in operation, including the family’s farm, and the road was later moved away from the house and renamed Bieker Road for John Bieker, Marie’s dad.

All of Roy and Marie’s children, but particularly the three sons, loved farming with the family. Following his high school graduation in 1980, Mark began farming full time alongside his dad. The family transitioned from dairy to cattle farming and also had chickens and, briefly, hogs. The amount of money that could be made was not a lot, and Mark eventually got a job with the city of Washington to make ends meet. However, he said he kept farming with his dad each day because he loved it. He said he and his parents had discussed that he would someday purchase and take over operation of the farm. Roger said he also would have purchased the farm in its entirety when his parents retired.

About three decades ago, Roy and Marie were ready to sell the farm to the next generation. They offered to sell all five children a piece of the land, which they each purchased for undisclosed amounts. Some of the siblings felt at that time that it likely wouldn’t continue on as a family farm due to the split.

“It really changed my life,” Mark said. “It was hard for me because that farm was my whole life.”

At the same time that Roy and Marie passed on ownership of the farm, neighboring tracts of land were being sold and developed into subdivisions and shopping centers. The Kochs remember working in fields along Highway 100 where Washington Crossing and Schnucks stand today. The roads had been gravel for most of their childhood, but they now were being paved so they could lead new homeowners to Washington Heights, Whispering Oaks, Weber Heights and other new housing developments.

The change accompanied a steady growth since the 1960s in the number of jobs available in Washington, particularly those connected to the industrial parks. Sal Maniaci, economic development director for the city, said that as more people moved to the area, more housing was needed, and the city identified that area as a good potential spot for annexation and residential development. He said the city would like to see Rabbit Trail Drive connect to Bieker Road through the land.

“We are very fortunate that Washington is not just a bedroom community. People can live and work here,” he said. “We have a need for more housing. (The farm) is a prime area, and it’s next to recent developments, so it makes sense to continue that. ... We never want to push any family if they aren’t ready, but now they’re ready.”

For Mark, the combination of the split farm and the encroaching neighborhoods of Washington encouraged him to seek other property in Berger to start a new-to-him cattle farm in the early ’90s. As he has approached his 60th birthday, he started thinking seriously about selling his portion of the Koch farm. He said that although he isn’t passing the land onto his children, he hopes the earnings from the sale can instead be something that will help their families in the future.

“My son lives in Hermann; my other son lives in New Haven. The (Koch) farm is not something we’re going to go back to,” he said. “I just felt I needed to move on.”

When Mark shared his plan with his siblings earlier this year, Tom, Jeanne and Rita felt that it would be a good time to sell their pieces, too.

“I think it became a domino thing,” Rita said. “We didn’t all get together and say, ‘Let’s sell our land.’ It just kind of fell into place.”

Tom bought a farm in Macon several years ago and resides there full time. Rita bought her share of the Koch farm as a retirement investment, and she is now in her 60s and eager to travel. Jeanne was in real estate and envisioned developing her share but never did.

“My head said ‘develop,’ but my heart has always said, ‘Mom loved this land and wanted it to stay a farm,’ ” Jeanne said. “We kept Mom’s dream alive for 21 years (after her passing), but now is the time.”

Roger and his wife, Doris, are not selling their piece of the farm, which is the southeasternmost portion, in the auction. About five years ago, Roger set up the Koch Family Farms LLC on the land and plans to continue farming his piece. He said he would still be interested in renting the neighboring land to farm as well, if the buyer is willing.

Roger also worked on the family farm alongside his dad, and in more recent years has farmed cattle and crops primarily with his two sons. He said for them, preserving the heritage of the farm by keeping it in the family is more important.

All agree the decisions to sell or not have been emotional and hard on the family, as they imagine it was for their childhood neighbors who have migrated away from the land over the years. The upcoming auction will list the acreage, buildings and other features of the six tracts up for sale but not the memories of their mom peeling apples for fresh apple butter, of eating potatoes for each meal when the crop was good, of the siblings good-naturedly teasing a young Rita for being afraid of cows or of playing pinochle for hours when relatives would come visit.

Those memories the siblings will have to maintain in other ways. Rita recalls a 1930s hardcover edition of the novel “Little Women” that was a gift from her aunt Lucille to her mother, and the tattered but treasured pages remind her of the two women every time she sees it on her shelf.

“Even when we don’t have the land or the house anymore, that house had generations of stuff in it, and just about everything was claimed by somebody,” Rita said. “We all have little pieces that we brought with us to our new homes.”

Amid a flurry of changes both to themselves and their community, many of which residents of other historically rural places can empathize with in the year 2021, Rita said she is confident in one thing that will remain as it has always been.

After more than 100 years of family farming and four generations of ownership, a majority of the Koch Family Farm was sold at auction Wednesday.