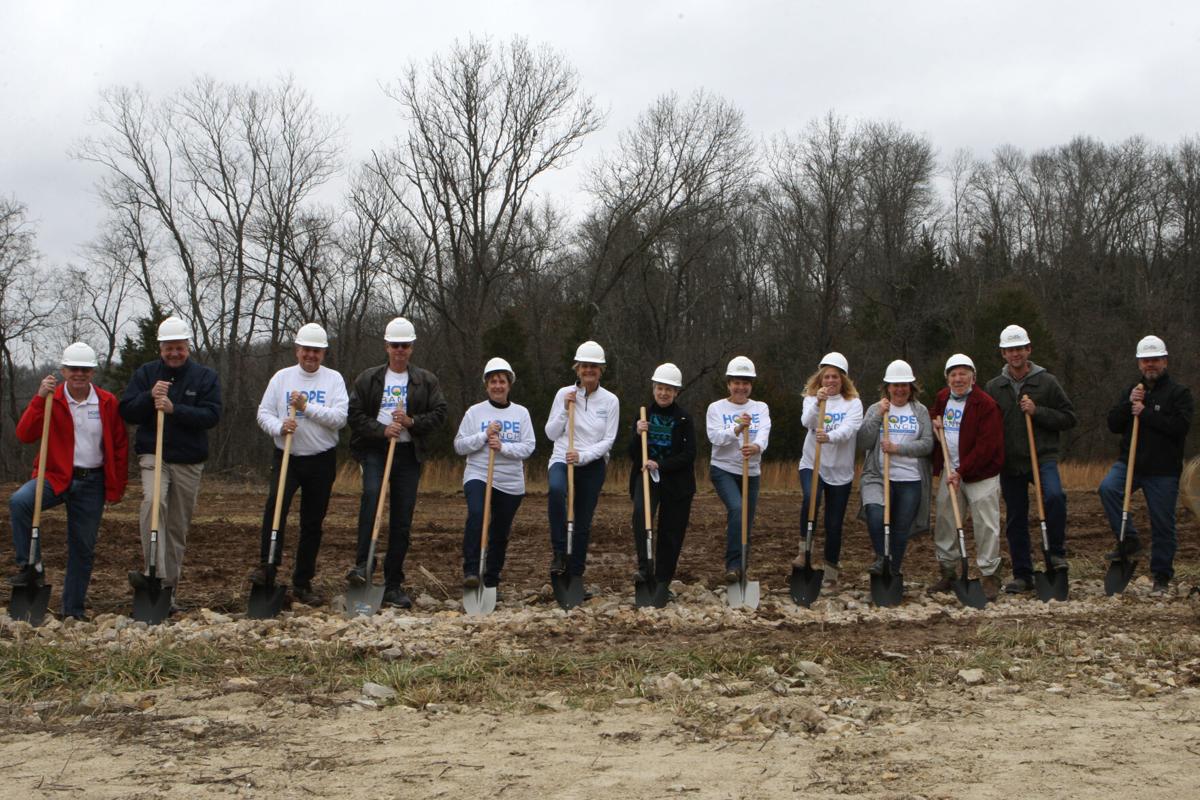 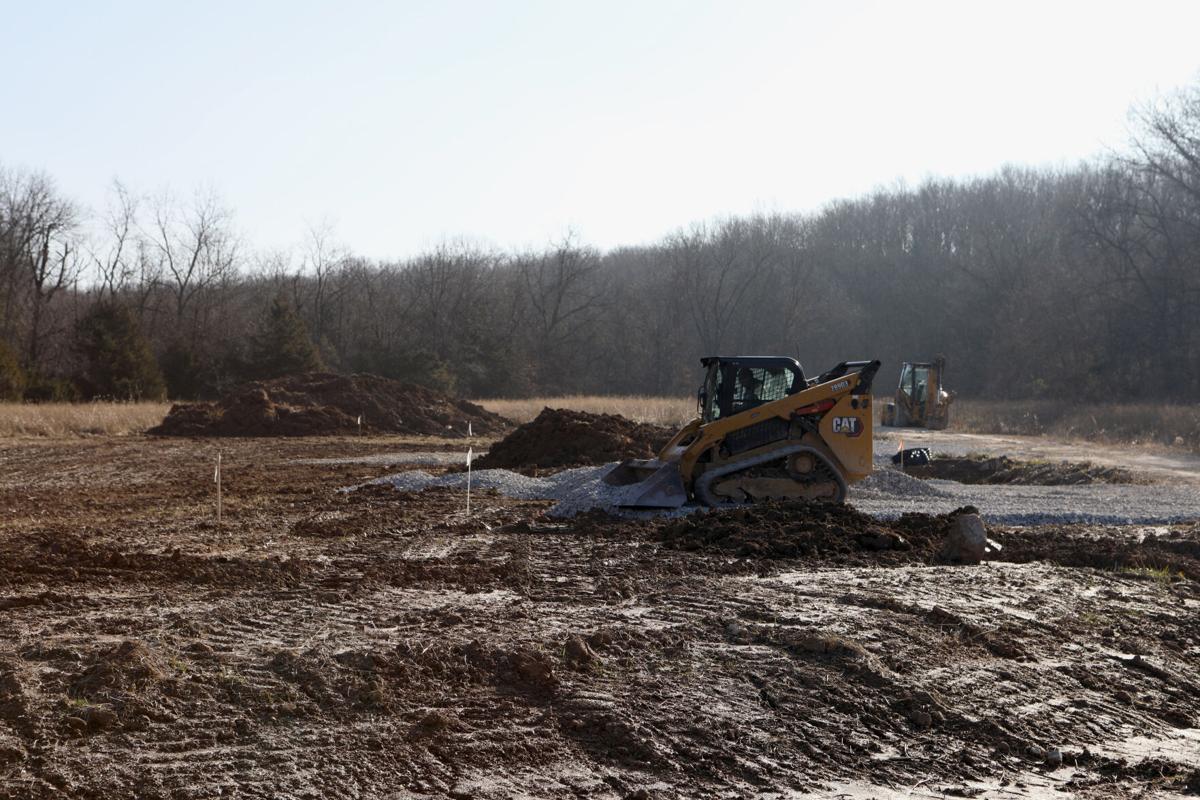 A construction worker moves rock at the site where the Hope Ranch of Missouri will be built near Stanton Monday, Dec. 14. 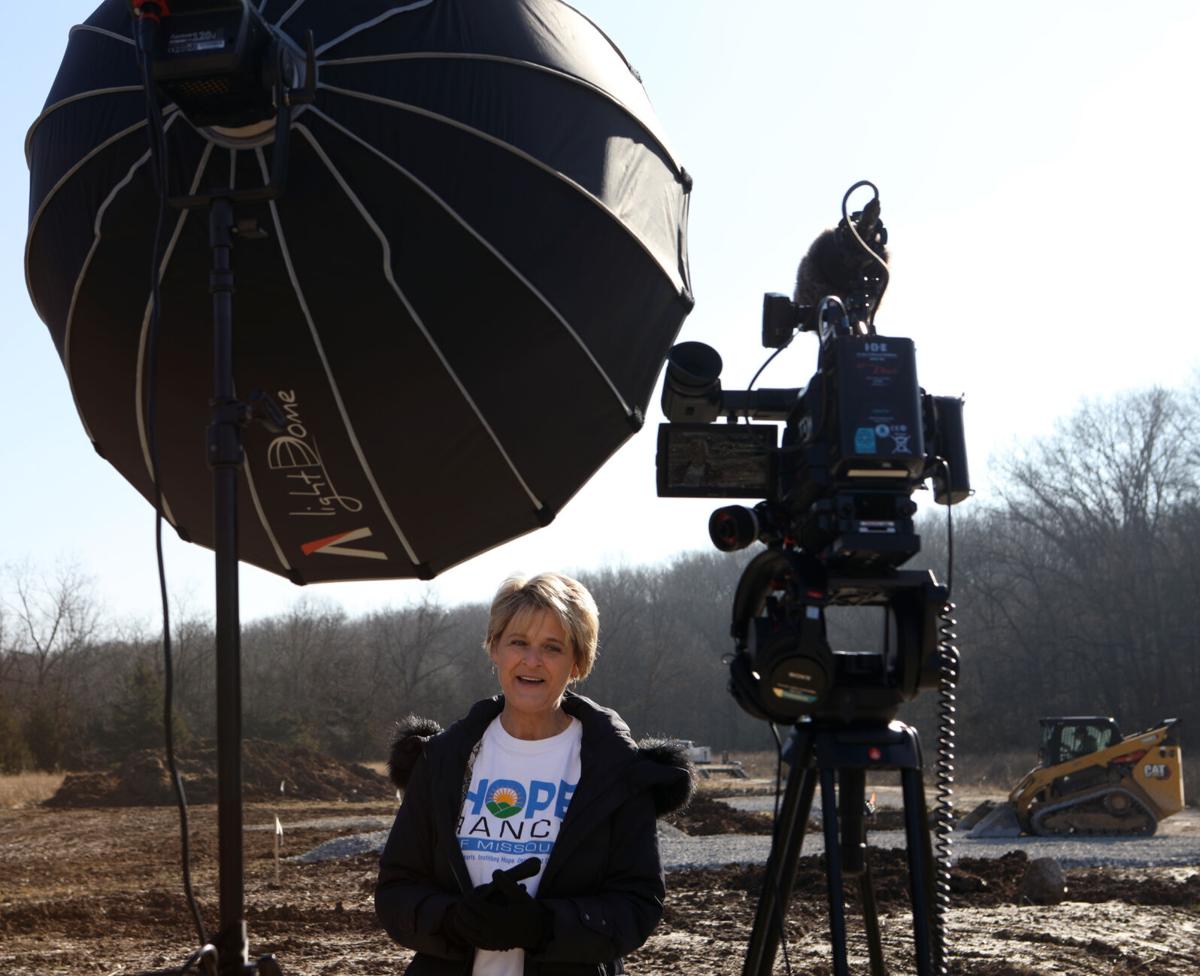 Jennifer Hope talks on camera about the Hope Ranch project at the construction site near Stanton Monday, Dec. 14.

Pictured is a rendering of the Hope Ranch home, which will be located near Stanton, created by Cochran Engineering. Construction on the home began Tuesday, Dec. 15, after a groundbreaking ceremony Saturday, Dec. 12. 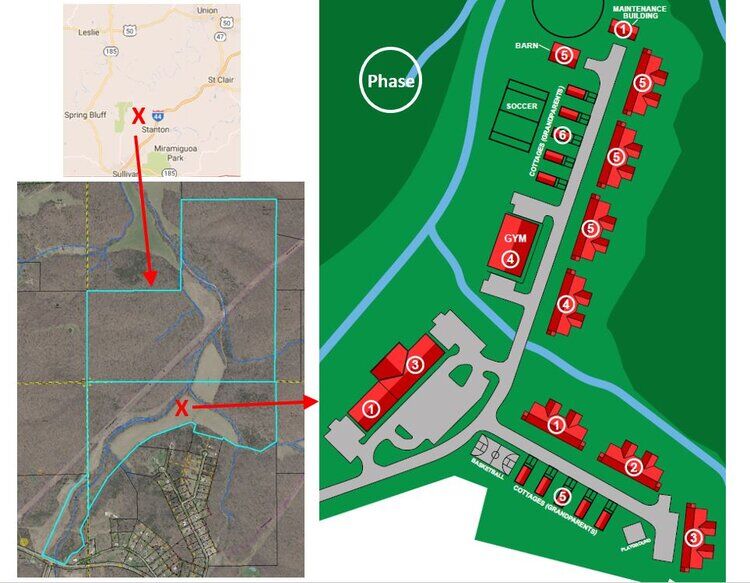 Pictured left is a map showing the location of the planned Hope Ranch near Stanton. Pictured right is a rendering of the whole ranch. The numbers on the buildings represent the build order.

A construction worker moves rock at the site where the Hope Ranch of Missouri will be built near Stanton Monday, Dec. 14.

Jennifer Hope talks on camera about the Hope Ranch project at the construction site near Stanton Monday, Dec. 14.

Pictured is a rendering of the Hope Ranch home, which will be located near Stanton, created by Cochran Engineering. Construction on the home began Tuesday, Dec. 15, after a groundbreaking ceremony Saturday, Dec. 12.

Pictured left is a map showing the location of the planned Hope Ranch near Stanton. Pictured right is a rendering of the whole ranch. The numbers on the buildings represent the build order.

The moment was a decade in the making.

In seven years of regular meetings to plan for the multimillion-dollar project, her team said Jennifer Hope never voiced any doubt that it would happen. For Hope, the moment she came closest to believing her dream wouldn’t happen occurred in March. All fundraising efforts were halted when the COVID-19 pandemic hit, and the project’s initial construction start date was pushed back almost nine months and fundraising efforts dwindled to almost nothing.

But on a crisp Saturday morning around 15 people, mostly founding board members, including retired Sheriff Gary Toelke, retired Judge Larry Davis, retired educator Meg Vogel and Dr. Lee Parks, donned shiny white hard hats and proudly pushed shovels into the ground in Stanton. It was the official groundbreaking of Hope Ranch of Missouri, an envisioned family-style home and school with live-in counselors and house parents for children in the foster care system in Franklin County.

Hope saw the act of shovels hitting rock Saturday as physical evidence that she and her team, which comprises people trained in education, counseling, social work, law, finance, health care and law enforcement, had conquered one of the hardest challenges they’ve faced since she first had the idea while working as assistant superintendent at Union R-XI School District.

“The momentum was there, and this (pandemic) stopped us in our tracks,” Hope said. “This was the year of fear, as far as (wondering) ‘Is this going to happen?’ ”

When it’s complete, Hope Ranch will be a $4.2 million haven for children in the foster care system to get support, counseling and education. The nonprofit plans to open its first residential unit by September 2021. It is still about $1.2 million away from building the school. The Mabee Foundation awarded the nonprofit $750,000 through a challenge grant, meaning the ranch must raise the remaining money required to finish the project within one year or risk losing the grant.

For Natasha House, a former child of the foster care system, who now volunteers with Hope Ranch, every day that passes is a day the children who should be living at the ranch are stuck in their situations. She said she knows one child personally, and she reminds Hope often the ranch needs to open as soon as possible for him.

“Hope Ranch is beyond needed,” House, 32, said. “I thank God I was able to get accepted to college. I took my opportunity and ran. I can’t say the same has happened for a lot of my foster care siblings or my biological siblings. The only piece I can think is because we didn’t have that place to give us hope. Had I had that spiritual guidance and consistency, I think that could have significantly changed my entire outlook.”

Hope Ranch plans to involve its children’s biological families in counseling and training, with the hope of some children eventually returning home. From April 2019 through March 2020, 31 of the 110 children discharged from the system were reunited with their families.

Organizers say the ranch-style homes will welcome children aged 6 through 18 and older. Hope said this is partly due to licensing requirements to care for children younger but mostly because older children have a harder time finding a permanent adoptive family. In 2018, almost half of all children adopted in Missouri were between the ages of 1 and 6, according to the state department of health and senior services. Children in each age group above 11 made up less than 3 percent of the kids adopted.

Annie Foncannon, executive director of the Franklin County Children and Families Community Resource Board, said the ranch will allow these older kids to get support and counseling before they age out of the system. The ranch will welcome these children even after they’ve turned 18, hopefully preventing them from getting involved in crime, she said.

“One of the reasons there’s a lot of reform going on in the child welfare system is to try to stop the pipeline to jail and see what we can do to write that away,” Foncannon said. “I think a place like Hope Ranch is actually giving these kids hope to not end up in that pipeline. And it’s not that all kids in foster care end up in that pipeline, because some kids are amazingly resilient and they’re able to make it. But unfortunately, the majority of them statistically don’t.”

Toelke’s four-decade career in law enforcement also familiarized him with this pipeline.

“I’ve always felt that if you’re going to change someone, you have to do it when they’re younger,” he said. “You see a lot of these kids come into jail, and they’re good kids, they’ve got a lot of talent, but somehow they got messed up and went down the wrong road. They just needed something there to guide them. It will be really nice to have a program that does that.”

A team of around a dozen local contractors led by Bob Loughman of Jasper Builders, Union, began work Monday on the roughly 7,700-square-foot residential building.

“I truly believe we would have been already under construction, but then when COVID hit the whole world turned upside down,” Loughman said. “They were so close when the rug got swept out from under them. Yet they’ve stuck with it and fought their way through it, and now here we are back alive. The project is alive.”

Loughman is organizing the team of almost entirely local contractors, many of whom Hope said are donating some time and materials, to construct the home planned to house 12 children and two sets of house parents 10 months from now. He said the team is using many maintenance-free materials to construct the home.

“It’s the people, the board, the Jennifer Hopes of the world, Sheriff Toelke and Judge Davis who have put in a lot of time and effort to pull this thing together and have never given up,” he said. “We’re honored to have our names associated with it.”

The 190-acre property was donated in 2017 by now-board member Peggy Swisher-Piotraschke, who purchased it specifically for Hope Ranch. The long-term plan is to build a school and enough residential wings for 84 kids, who will be split into 14 “families” — each with two house parents.

Hope said the board will start the process of hiring staff after the new year, including the parents, teachers and certified counselors. The only position that will not be paid is the director — Hope.

“We’ll have competitive pay,” Hope said. “We want to attract the best and keep them.”

The 24/7 counseling is one element of the ranch that will be unique among many other group homes. Cheryl Savage, licensed clinical social worker and founding board member, said a focus on counseling is essential to address each child’s challenges holistically.

“We’re just starting to understand how much trauma affects lifelong decisions. So the question is ‘How do we restructure the system socially and emotionally?’ and shift the entire philosophy of the system,” Savage said. “My utopia was weaving the counseling system through every piece of these people’s lives.”

At Saturday’s groundbreaking, former board member Ron Cowan said a prayer over the soil before the team’s shovels broke the surface.

“When I started the prayer I was trembling,” Cowan said. “I’ve felt the holy spirit working through the last seven years. Just to see what they’ve done — most people would have given up by now. In the future, as we develop, it’s almost limitless as to how many kids we’ll take care of eventually. It’ll be beyond our lifetimes.”

Donations to Hope Ranch of Missouri can be made online at hoperanchmo.org/donate.