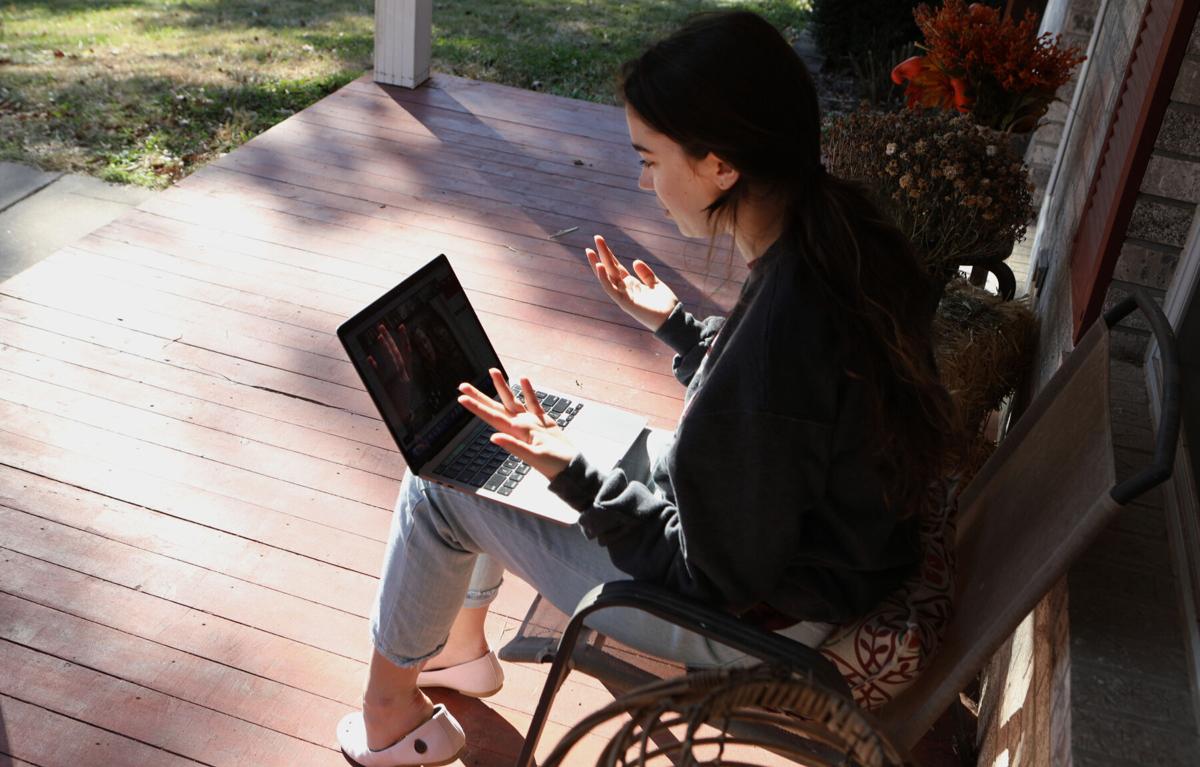 Emily Hahne speaks during her Zoom lecture Thursday, Nov. 19. Hahne, a freshman at Loyola University, decided to do classes from her home in Marthasville this year because of the COVID-19 pandemic. 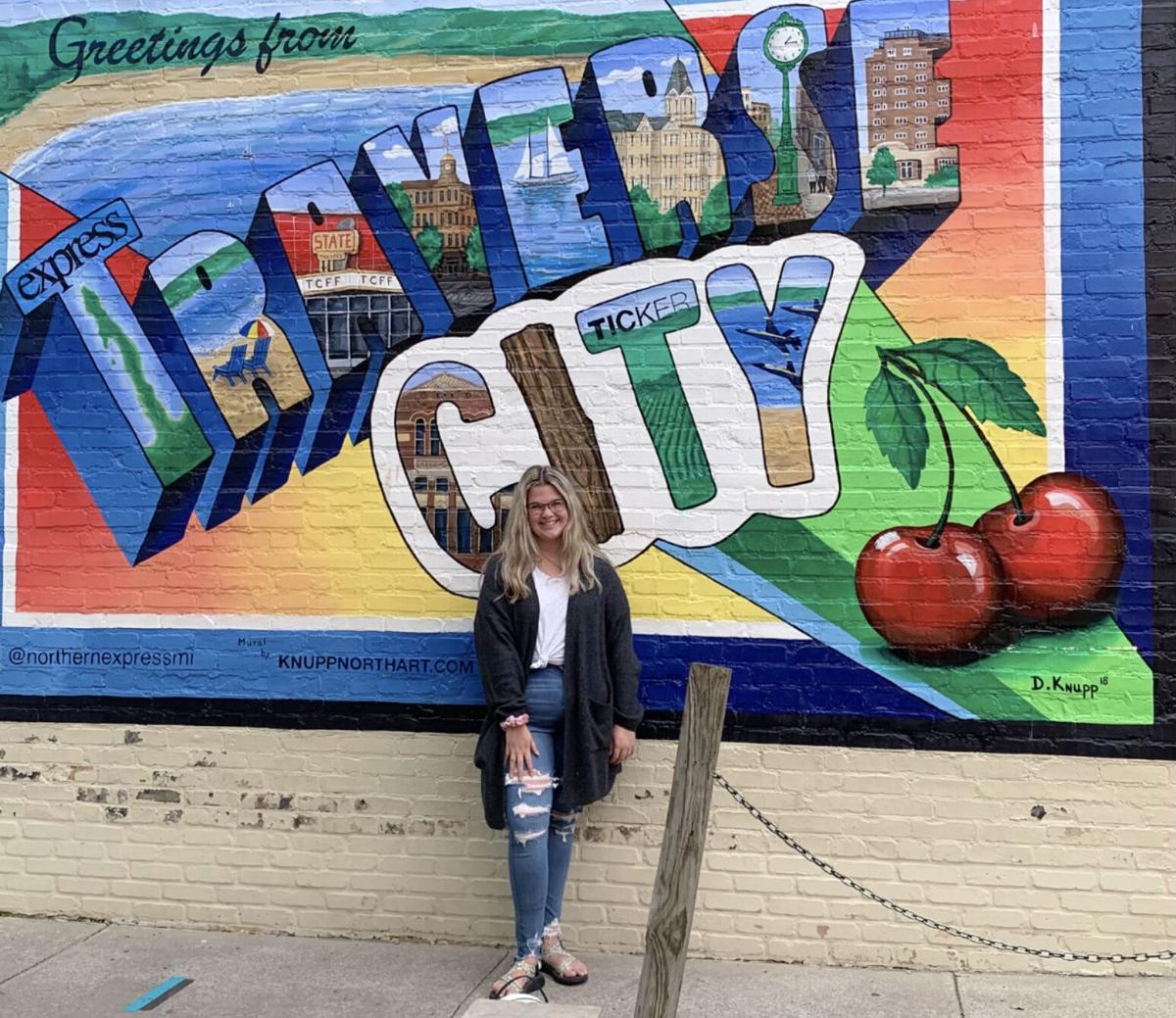 Kylie Phinney poses next to a mural in Traverse City, where she attends college. 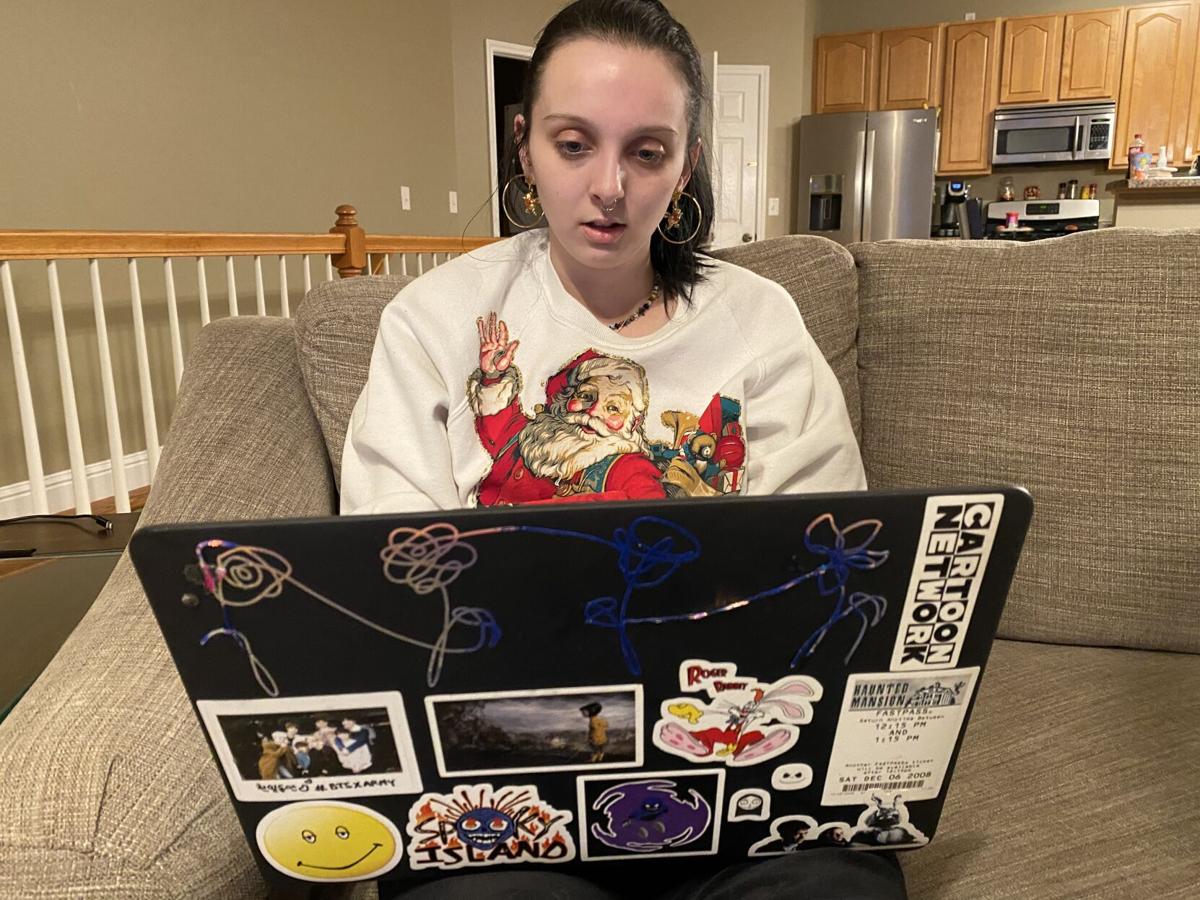 Cassidy Lesire, pictured doing homework in her home near Washington, is a sophomore at St. Louis community College. Next semester she will transfer to the University of Central Missouri and attend classes virtually. 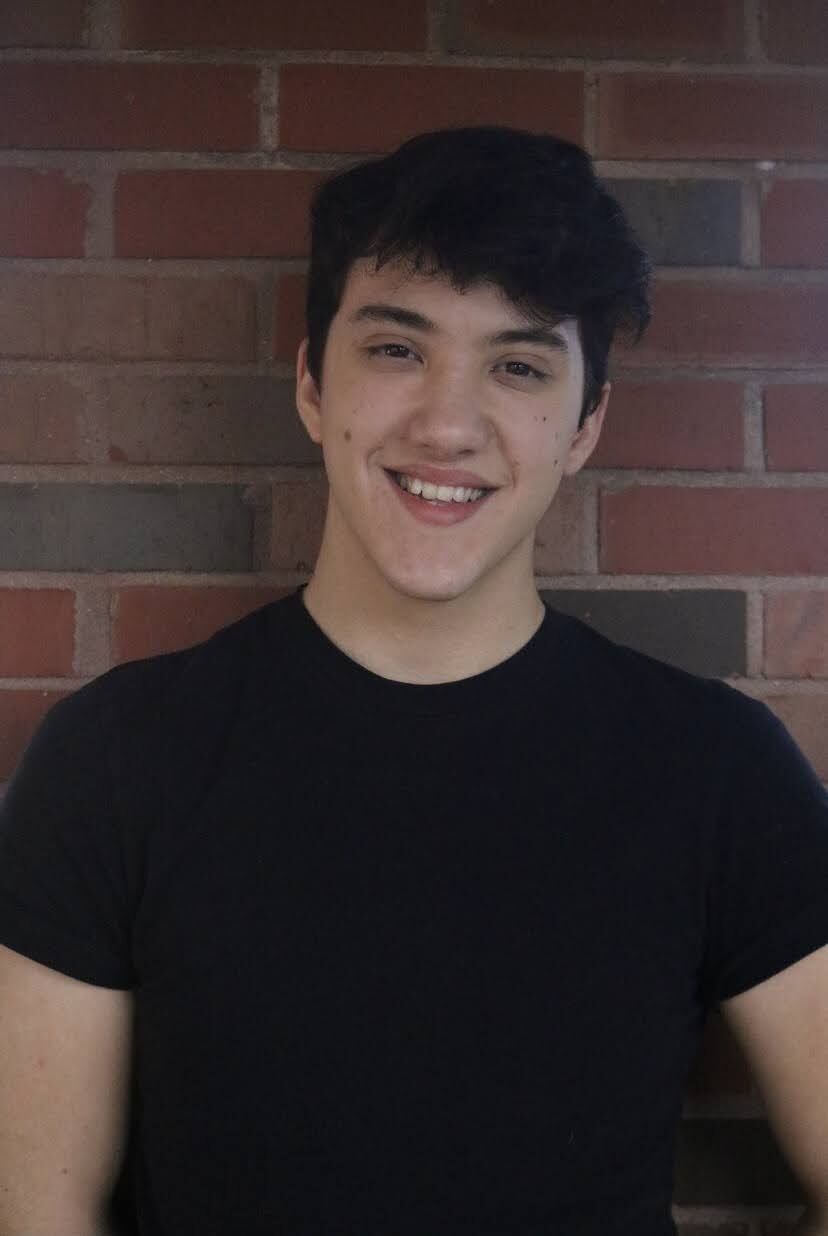 Pictured is Drew Post, a freshman at Southeast Missouri State University. He is attending hybrid classes for the fall 2020 semester. 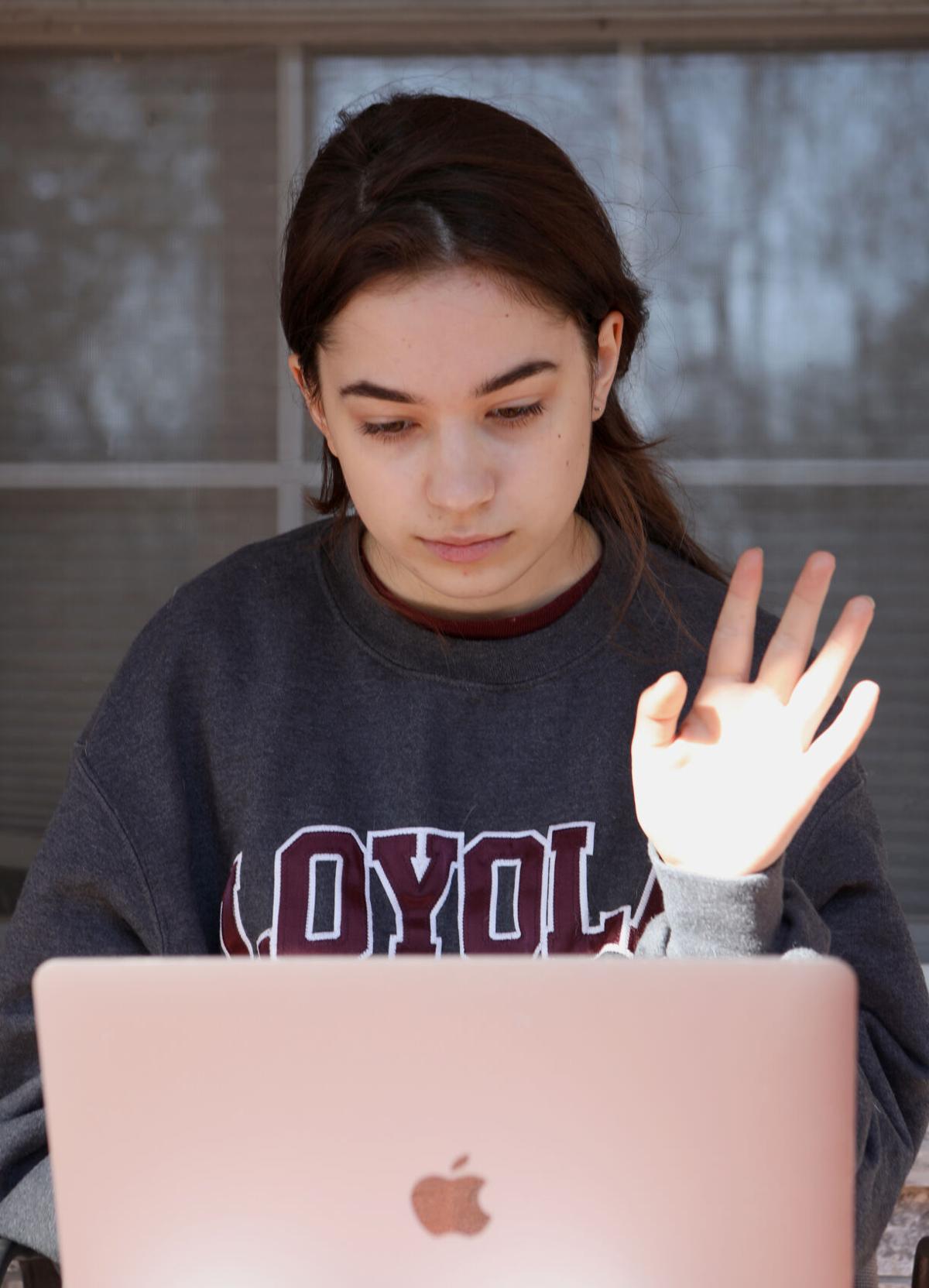 Emily Hahne raises her hand to speak during a Zoom lecture for her international relations class at Loyola University Thursday, Nov. 19.

Emily Hahne speaks during her Zoom lecture Thursday, Nov. 19. Hahne, a freshman at Loyola University, decided to do classes from her home in Marthasville this year because of the COVID-19 pandemic.

Kylie Phinney poses next to a mural in Traverse City, where she attends college.

Cassidy Lesire, pictured doing homework in her home near Washington, is a sophomore at St. Louis community College. Next semester she will transfer to the University of Central Missouri and attend classes virtually.

Pictured is Drew Post, a freshman at Southeast Missouri State University. He is attending hybrid classes for the fall 2020 semester.

Emily Hahne raises her hand to speak during a Zoom lecture for her international relations class at Loyola University Thursday, Nov. 19.

On a crisp and windy Chicago morning, a professor at Loyola University sits at their computer and prepares for a lecture. With a click of their mouse, the Zoom call is live and the professor is addressing their class.

One of those students is seated nearly 300 miles away in her Marthasville bedroom. Freshman Emily Hahne, who is majoring in international relations and hopes to work for the U.S. State Department, flips open her laptop and logs on every day of the week for her college classes.

Loyola University, like many higher education institutions, has shuttered its campus this semester due to COVID-19 concerns, and Hahne is attending the school 100 percent virtually.

“I actually looked into taking community college classes for a semester,” Hahne, 19, said. “I emailed Loyola to see if my scholarship would hold, and they said it would, so I definitely considered it. I would have done it, but all the community colleges I looked at didn’t have enough credits that would transfer.”

Hahne, a Washington High School alumnae, is not alone. She is one of thousands of students who had their university plans interrupted, modified or put on hold due to the coronavirus pandemic.

For Hahne and other fully virtual students, particularly incoming freshmen, one of the main challenges they face is forming genuine relationships with new friends and instructors.

“It definitely is hard for me to connect with professors,” Hahne said. “I know that can be really important when I need recommendations for internships and everything, and I’m kind of worried if they don’t know me that it might be difficult. It’s not like I can stay after class.”

Thankfully, she’s had better luck connecting with friends. After learning two weeks before she was set to move to Chicago that campus would be closed, she and other students in the Interdisciplinary Honors Program formed a group chat to stay in touch. She even got to visit her would-have-been roommate, who is from the Chicago area, in August.

A popular avenue to making friendships at college — joining clubs or campus organizations — is effectively out-of-reach to students such as Hahne.

“I was really involved in high school, so I wanted to get really involved in college as well,” Hahne said. “Most of the clubs aren’t having meetings since we’re all virtual, so it’s hard to meet people who actually go to my college.”

Other students are attending hybrid classes, meaning they have some virtual lectures and some in-person each week. For Drew Post, a freshman at Southeast Missouri State University in Cape Girardeau studying musical theater, the hybrid model presents its own unique challenges.

“What I find difficult is knowing when assignments are due since the class is split in half. If I go in-person Tuesday, on Thursday they’re teaching the same thing your class just learned,” said Post, 19, a WHS alumnus, who is living on-campus. “Studying has also been difficult. You have to find the right time within your schedule, and it’s easier to forget.”

Even with some in-person classes and a few clubs that meet social distanced, Post has also found it challenging to make friends.

“It’s hard to know the person behind the mask sometimes because it’s hard to familiarize yourself with what they look like when you can’t see three-fourths of their face,” he said.

Incoming freshmen are not the only college students feeling huge impacts from COVID-19.

Sophomore Cassidy Lesire, 20, was already planning to complete her first two years at St. Louis Community College before transferring to the University of Central Missouri in Warrensburg. She is hoping to major in film studies at UCM.

Because of the virus, she had her last in-person class at the school without even knowing it. The students were instructed not to come back after spring break, and she is all online this semester. She was eager to return to in-person classes in Warrensburg next semester, but she is not planning on returning as the college has yet to make an announcement about next semester.

“I was going back and forth about whether I wanted to sit out a semester. I wasn’t comfortable going with the possibility of classes getting canceled, so I’m going to meet in the middle and take online courses (next semester),” Lesire said, adding that to take a semester off entirely “would just push me back so far from the timeline I set for myself.”

Lesire, a WHS graduate, feels grateful to have friends from community college who she can keep in touch with and is not sure what will happen when she starts virtually at UCM.

“In my virtual classes now, I know a couple of people’s usernames on discussion boards, but I don’t think I’m going to be making any friendships through virtual learning.”

Even with the lack of new social connections, both Hahne and Lesire said one positive to come from virtual learning is that they have more free time. Both have used it to get jobs to help pay for school. Hahne works three days a week at Wedding Creations, and Lesire works at Cinema 1 and at JoAnns Fabrics.

Nationally, the 16 to 24 age group has been the most impacted by COVID-19 in terms of unemployment, because they most often work in the service industry, one of the hardest-hit sectors. In July, the national youth unemployment rate for that industry rose by 1.1 million, or 21 percent, compared to 2019, according to a report from the U.S. Bureau of Labor Statistics.

The report also explains that the number of unemployed young people usually increases between April and July because people who were not in the labor force while attending school begin seeking employment. This year unemployment “increased sharply” in April because of the coronavirus pandemic, rising from 1.7 million in February to 4.9 million in May. In July it was at 4 million.

For Hahne and Lesire, working is a way to save for school. Those are the same reasons Kylie Phinney got a job — although hers is proving to be helpful to her education in a whole other way.

Phinney, a freshman nursing student at Northwestern Michigan College in Traverse City, applied to the local hospital for something to do, not knowing what she’d learn there would soon outpace what she was learning in school. She was hired on as an ICU nurse’s aide and is preparing to work in the COVID-19 floor.

“I get to work more and have money to pay for college, which I wouldn’t have been able to do if we were in in-person classes,” said Phinney, who graduated in May from Washington High School.

The job has also helped her make new friends in the area. Previously, she was suffering from heightened anxiety because she was feeling so isolated.

“I’m very social and like talking to people, so about a month ago it was really hard on me,” said Phinney, who lives with her aunt and uncle in Michigan but has not met many people at her school. “My body was so homesick not having that friend factor. At the hospital, I’m starting to get a group of people I can talk to and text, which is really nice.”

Phinney, Post and thousands of students nationwide will return home to Washington next week for Thanksgiving and many will not go back until spring semester, instead finishing the semester virtually.

When they return to campus in the spring, Hahne will not be among them. As Loyola is still planning to hold classes virtually until at least fall 2021, she said she’d rather wait it out a little longer.

“I think it’s smarter to stay home and save up,” Hahne said. “I’m not sure it’s worth the money to be alone in a dorm room all day. I’m not sure I would have made the same decision a few months ago.”

Even if she won’t be on campus, Hahne said she’s happy she picked Loyola and pointed out how the pandemic ironically helped her make the choice.

“I’d always dreamed of going to a really small New England school or a school in a big city on the East Coast, but going (so far away) scared me with COVID going on,” Hahne said. After her class is finished, with a hand that’s slightly cramped from note-taking, Hahne exits Zoom and shuts her laptop screen.

Hahne, who is enrolled in 18 college credit hours this semester, hopes to be on Loyola’s campus making new memories as a college student soon — the caffeinated late night study sessions that are interrupted by the arrival of a pizza, cheering on the Loyola Ramblers athletic teams, exploring new interests and hobbies through different student organizations and then that final special memory of crossing the graduation stage and receiving her diploma.

She said, “I do love Chicago, and I really want to give Loyola a chance in-person.”