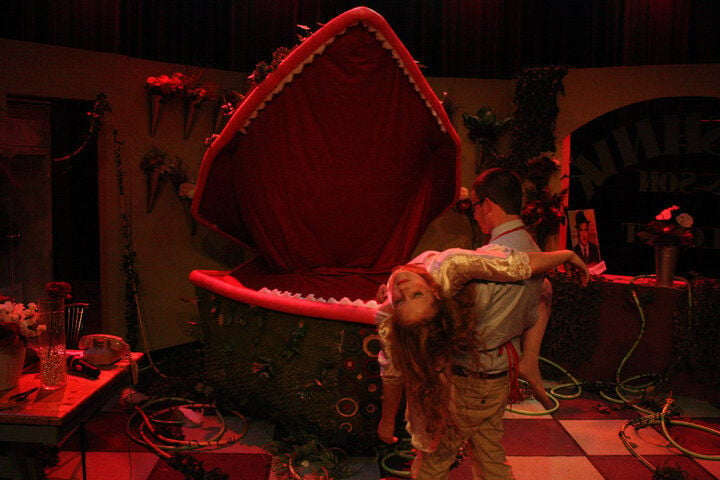 Danny Tobben and Rebecca Lahay perform as Seymour and Audrey in Riverside Players’ 2010 production of “Little Shop of Horrors.” 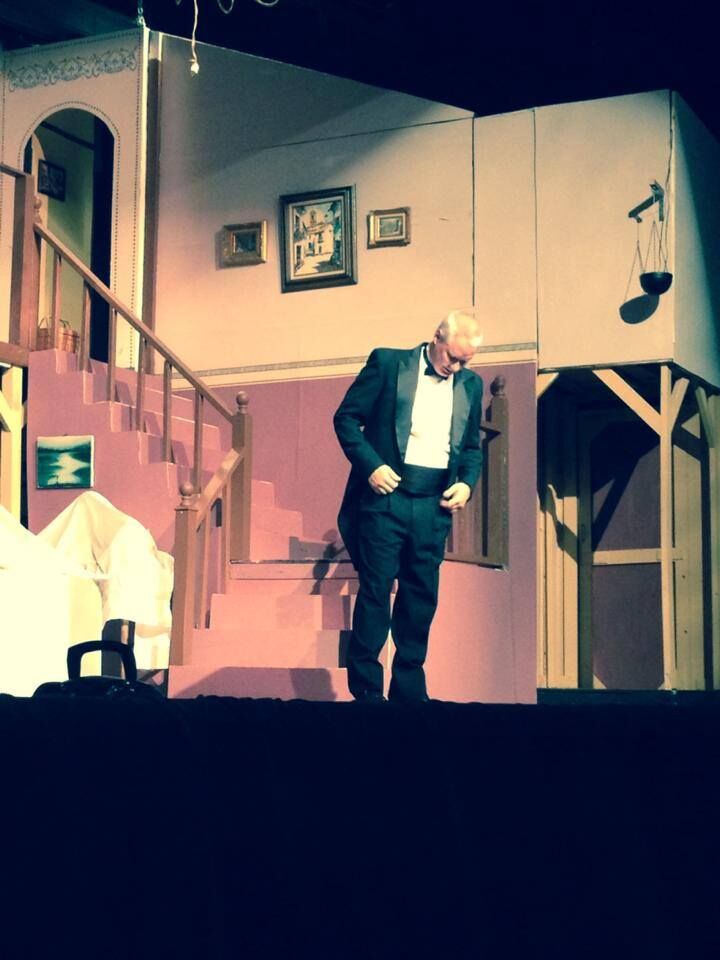 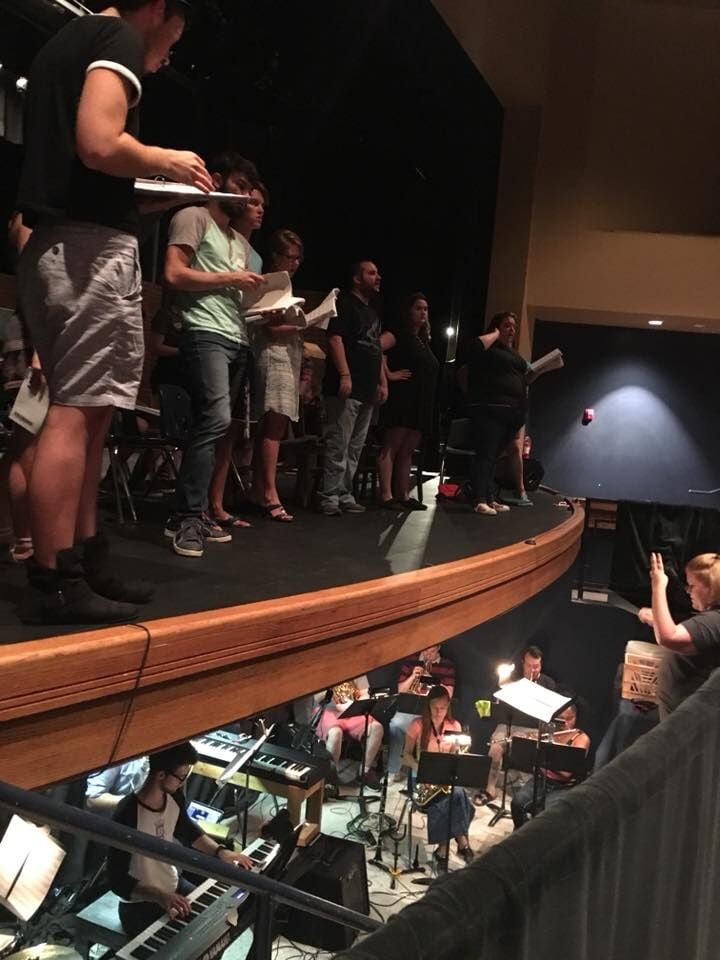 The cast and orchestra of Riverside Players’ 2018 production of “Assassins” rehearse at the start of “tech week,” the week leading up to a performance when the cast rehearses the play and adds in full sets, lights and costumes. 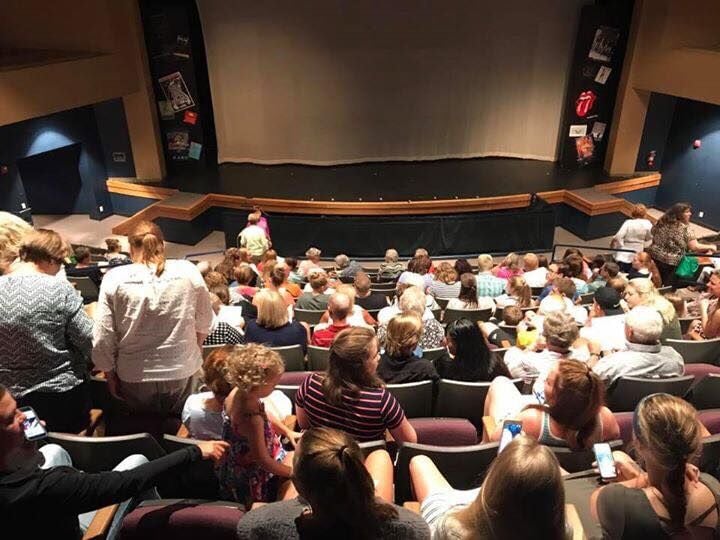 Audience members take their seats before a performance of Riverside Players’ 2017 production of “9 to 5.” 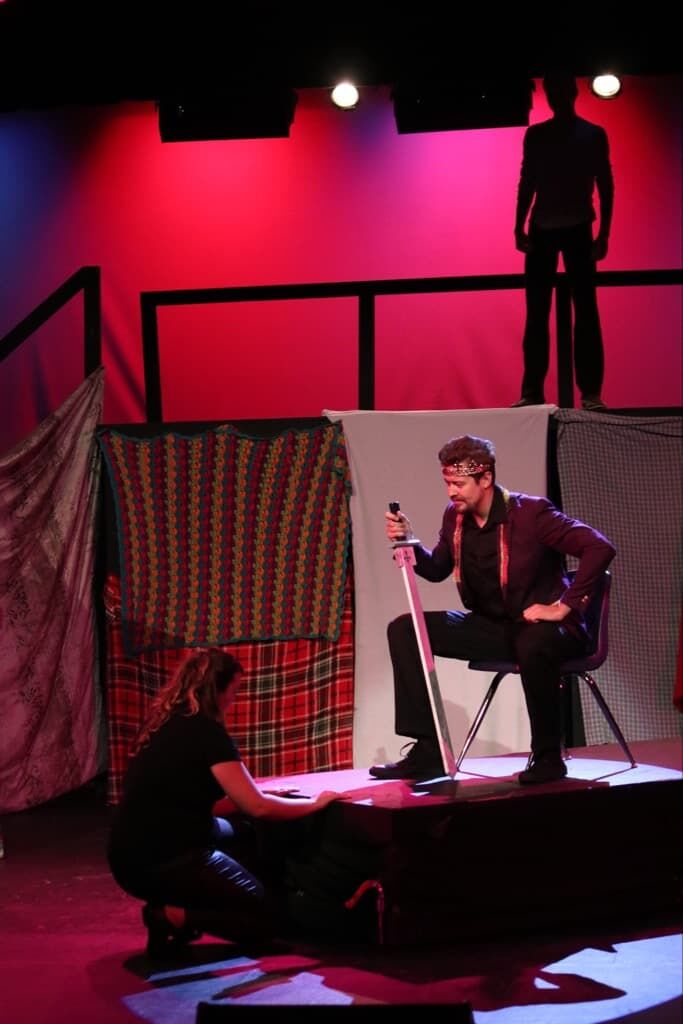 Danny Tobben and Rebecca Lahay perform as Seymour and Audrey in Riverside Players’ 2010 production of “Little Shop of Horrors.”

The cast and orchestra of Riverside Players’ 2018 production of “Assassins” rehearse at the start of “tech week,” the week leading up to a performance when the cast rehearses the play and adds in full sets, lights and costumes.

Audience members take their seats before a performance of Riverside Players’ 2017 production of “9 to 5.”

Every time Tara Steffens looks at her arm, she remembers working crew for a live production of the play “Working” at the Washington City Park main stage. A surprise thunderstorm came nearly out of nowhere during Saturday night’s show, and Steffens burned her arm yanking lights down from the stage to save them from getting damaged.

The burn is one of dozens of similar stories of missteps, improvised lines, spontaneous solutions to problems and more from 15 years of putting on live theater productions in Washington. Steffens and fellow board members Tim and Sarah Buchheit, as well as the dozens of other volunteers over the years, have answered each with the same mentality: Keep performing.

“That’s what goes on in theater,” Steffens recently told The Missourian. “There’s a lot of crazy things that happen that we very fondly laugh about now.”

In 15 years, the Riverside Players — which is the longest-running theater troupe in recent memory in Washington — have put on 34 shows and entertained thousands of area residents, but they have never had a permanent home. Tim Buchheit recalls putting up shows at the riverfront, in St. Francis Borgia Regional High School’s auditorium, in the storefront that now houses Main Street Creamery, the Washington Farmers’ Market, the Washington Brewery, the fairgrounds and more. The group has even traveled out of the county, performing in St. Louis and Hermann.

Whatever it takes to put on a show, he said, is what the troupe of volunteers will find a way to do.

“I just think it’s super important to get theater out there,” Sarah Buchheit said. “It gives you empathy and a different perspective that you don’t get through almost anything else.”

Fifteen years ago, adults in Franklin County who wanted to perform or produce live theater had little options unless they were willing to drive to St. Louis. When Steffens returned home to Washington after college, she quickly felt the lack of opportunities. While attending Borgia, Steffens had been a theater student of Tim Buchheit’s, who has been in theater education for more than 30 years, and she wanted to return to the creative outlet she’d loved as a student.

She and Tim Buchheit founded Riverside Players along with Clayton Smith and Michelle Larson in 2006, and they put on their first show that summer. “The Boys Next Door” debuted at Borgia High School to a modest audience, and after paying for copyright permission to perform the show, costumes and sets — mostly with their own personal money — the group had enough money left over to make a donation to Emmaus Homes and start saving for a show the following summer.

“A lot of people put in not only personal time but also personal money,” Steffens said. “That was really key early on ... people committing to it with their passions, their time and their money.”

The next show the group tackled was a three-men comedic retelling of several Shakespeare plays. After performing at Borgia, the show was put on again at Washington Art & Winefest and at the Tin Ceiling Theater in St. Louis. That Christmas, the same small group put on a special performance of “It’s a Wonderful Life: a Live Radio Show” at Washington High School’s theater, and that gave the small group the confidence to start dreaming of bigger shows.

In 2009, during its fourth year as a theater company, Riverside Players tackled its first musical, “Godspell.” In addition to costing more to buy the rights to perform — usually up to $5,000, with more popular shows being more expensive — Sarah Buchheit explained that musicals are often far more labor intensive than straight plays because performers have to learn music and choreography as well as dialogue and stage movements.

Over the years, the shows have involved people whose daytime occupations are teachers, businesspeople, retail employees, retirees and even a car salesperson. It’s a mix of people who did theater as a kid and those who have never been onstage.

Steffens stressed that the number of people participating would be even bigger if one of the biggest misconceptions about community theater could be cleared — that people can only be involved by performing onstage.

“We tend to struggle more with getting people to help behind the scenes,” Steffens said. “We need people to build sets and sew costumes and sell tickets and buy tickets. ... There’s not a full awareness of what it takes to do theater.”

The group’s biggest undertaking came in 2011, when they put on a performance of the Tony Award-winning “25th Annual Putnam County Spelling Bee,” which ran on Broadway from 2005 to 2008. The show is designed to have four audience members “compete” in the bee along with the cast members, making the show truly different every time. The show is known for lively and energetic numbers, colorful characters and comedic improvisation.

Steffens said the show was bigger and had more moving parts than they anticipated, and Tim Buchheit added that it was still a relatively new show that lacked the name recognition of “Godspell” or the 2010 summer musical, “Little Shop of Horrors.”

“We did (Spelling Bee) really early after it was released,” Steffens said. “Usually if a show has come through The Muny or The (Fabulous) Fox, you’ll pull a little bit more people.”

It was the closest they’ve come to wondering if they would make enough off a show to afford to do one next year — that is, until the COVID-19 pandemic. They canceled the two productions originally scheduled for summer 2020, “Noises Off” and “Joesph and the Amazing Technicolor Dreamcoat.”

Not wanting to go a whole calendar year without a show, the group put on its first virtual play, “The Audition,” June 20, 2020. Around 20 actors delivered their lines via webcam to audiences watching on their screens at home. Ticket proceeds were donated to area educational theater programs such as Tim Buchheit’s at Borgia and Sarah Buchheit’s at Union High School.

The group’s most recent time on a physical stage remains its 2019 season of “Pippin,” “The Odd Couple” and “The Wake Murder Mystery” — which Steffens wrote — but Tim Buchheit said the group is working on securing a venue to put on a Christmas-themed show this December.

The theater troupe’s biggest long-term goal is to secure a building of its own. The group has 501(c) status, meaning donations to the organization are 50 percent tax deductible, but they said raising enough funding to cover renovations and upkeep on a permanent building would be a huge undertaking.

However, all said it’s an undertaking they feel called to continue chipping away at if it means Franklin County would have its own permanent spot to see and help put on live theater.

“I don’t think there’s any single greater group pursuit than to have people ages 16 to 70 all bringing their different backgrounds and different opinions and feelings and sharing that to create something beautiful together,” Steffens said. “It’s just so special.”