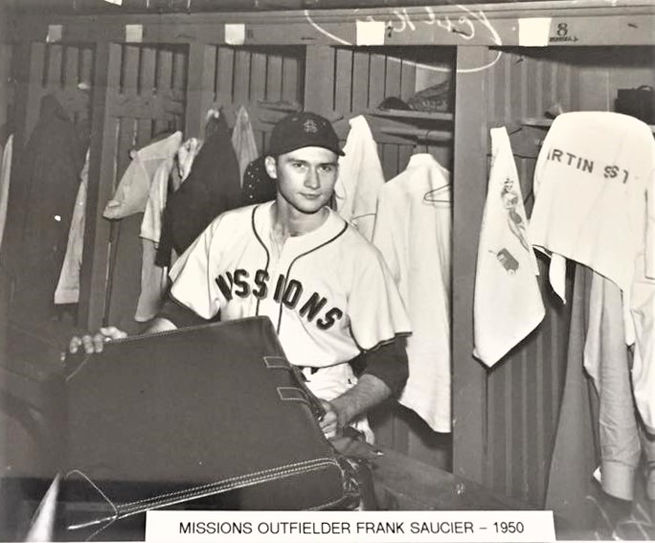 Washington native Frank Saucier, shown here with his Silver Slugger bat award, is featured in the book on Page 107. 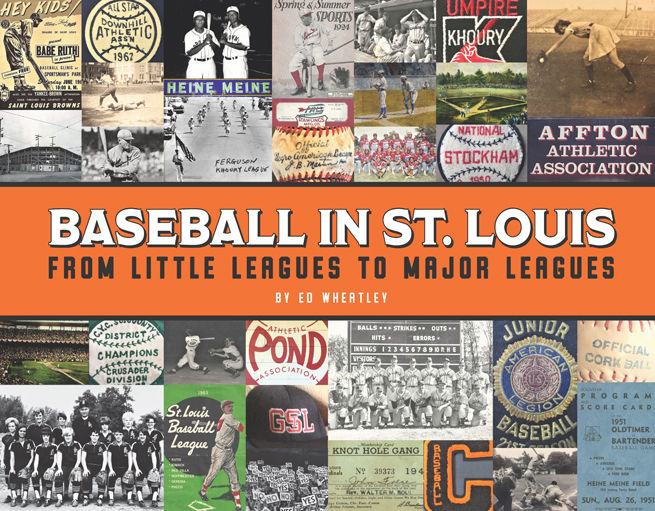 Washington native Frank Saucier, shown here with his Silver Slugger bat award, is featured in the book on Page 107.

Summer unofficially begins this weekend, but there will be no roar of the crowd or crack of the bat at Busch Stadium in Downtown St. Louis. Major League Baseball has yet to announce if or when the 2020 season will begin or the details of how games will be played amid the current COVID-19 pandemic.

Here at home though, baseball has returned.

“A total of 40 teams at three levels have committed to playing games this summer in an organization which includes teams which would have been playing in multiple organizations during a normal summer,” Bill Battle, The Missourian’s sports editor, wrote in the May 9-10 issue.

“Organizer Kent Getsee has been able to pull together many organizations which normally play American Legion baseball, but were stranded when the Missouri Department decided to cancel its season due to the COVID-19 pandemic. Additionally, some club teams which normally play in showcase events around the country during the summer, are joining as well.”

The local ball games, which began this week, can provide the “baseball fix” that many people have this time of year, and that’s fitting, since local ball has been the backbone of baseball from its beginning.

The book traces the history of baseball within the St. Louis region, from how the game evolved across the region and transitioned the city to be the best baseball town in America.

“It is not just a story of the Cardinals or the Browns,” said Wheatley, referring to St. Louis’ MLB teams past and present. “It’s the story of grassroots amateur baseball that created the strong fan base of the game across the city.”

It begins with the little leagues and few people knowing the Khoury League, which was founded in St. Louis and is still headquartered here, and today is played in all 50 states and countries around the world.

It highlights the great and nationally ranked high school and American Legion teams as well as taking an in-depth look into the African-American baseball experience and the great St. Louis teams of the Negro Leagues.

“No other book has taken such a comprehensive view of the region’s baseball experience,” said Wheatley, noting plans are already underway to develop “Baseball in St. Louis” into a documentary for the PBS network.

The documentary is scheduled to air March 2021.

Wheatley, who grew up in and around the world of baseball, from the time in his youth when his dad, Ed, played professionally to his own baseball activities, which continue now as he plays in senior league games across the country, will be in Washington Friday, June 19, from 6 to 7:30 p.m. for a presentation and book signing at Neighborhood Reads, 401 Lafayette St. in Downtown Washington.

Washington is a favorite destination for Wheatley. He has lots of fond memories of coming to Ronsick Field to watch his dad play in the semi-pro league.

“Not only is it picturesque and Americana, it has that local community feeling,” Wheatley said. “It has that local Americana feel that this is how baseball grew up; it was the town field, and people had (and still do) have a lot of pride in it.”

There are many fields like that across the St. Louis metro area, Wheatley said. They’re not jazzy stadiums with astroturf, but they’re special because they have history.

Ronsick Field, at the intersection of High and Second streets in Downtown Washington where baseball has been played for more than 100 years, isn’t mentioned by name in Wheatley’s new book. He had to draw the boundary line of what areas he could include in the book somewhere or else it would have ended up being 1,000 pages, he said.

Heine Meine pitched for the Browns in 1922, but he also owned a tavern and built a baseball field behind it.

“It doesn’t mean Major Leaguers or All Stars played there, but my father, my grandfather and now I am playing on this field, just like my ancestors,” said Wheatley. “That is the feeling I’m talking about.

“And it’s more than just a feeling; it’s pride at getting to play on that same field.”

Although he couldn’t include much about baseball played around Washington or Franklin County in the new book, Wheatley said the hope is that the stories that are included “will bring back many fond memories of years and decades past for St. Louisans form both sides of the rivers, who simply love the game of baseball, whether they were players, coaches, umpires or just fans watching and loving the game.”

Frank Saucier, the Washington High School graduate who played briefly for the St. Louis Browns and has been said to be “one of the best athletes, if not the greatest, ever to attend WHS, is featured in the book on Page 107.

When he hit .343 for the San Antonio Missions in 1950, that led the Texas League and also won him the selection as the Sporting News Minor League Player of the Year in 1950.

That got him called up to play for the St. Louis Browns in 1951, but was limited to just 18 games due to injuries and then he served two years in the U.S. Navy during the Korean War.

“His story is one of the great ones in baseball,” said Wheatley. “He was the best at every level of minor league baseball, leading the league in hitting, he won all these awards, he came up, he did get hurt at first, but the main thing was twice he had to leave baseball to go in military service.

“He was one of the greatest ball players who never was,” Wheatley remarked, noting that was the focus of a story that appeared in the St. Louis Post-Dispatch in March. “He walked away from baseball, which many men did then, because they could make more money in another job.”

Today Saucier lives in Amarillo, Texas, but Wheatley talks with him regularly and said he may try to get Saucier on the phone during the book signing in Washington.

The success of a few Franklin County high school baseball teams is recorded in the book, which includes a list of all of the Missouri and Illinois state champions and runners-up from 1950 to 2019.

That list includes teams from St. Francis Borgia, who came in second to Ritenour in 1957 (the score was 4-0 and the game was played at the City Park in Washington.

There was no shame in that loss, said Wheatley, noting the Ritenour team included Ron Hunt, who would go to play 12 seasons in with MLB.

Three teams from New Haven also are included on the list — the 1987 team which was crowned state champions with a win of 14-0 over New Franklin, the 2007 team that topped Stoutland with a score of 5-4 to be named state champs, and the 2002 team which finished in second place, losing by one run, 5-4, to Marion C. Early.

“Even if your school team isn’t mentioned on the list, you may remember having to play against those teams and you remember how good they were, and you appreciate it,” said Wheatley.

Much of the book is devoted to how “Baseball Became a Game for the Youth of St. Louis,” as one section is titled. It highlights the Khoury League, CYC baseball, high school baseball and American Legion baseball.

Wheatley joked that just like St. Louisans have a unique habit of asking any new person they meet, “Where did you go to high school?”, in the world of St. Louis sports, a parallel question is, “Where did you play baseball?”

The Washington Youth Sports Association, a nonprofit recreational sports group for ages 4 to 18 that marked its 65th anniversary in 2018, was founded in 1953 as the Washington Khoury League.

O.H. “Pop” Barklage could be called the father of the Khoury League in Washington. He and George Khoury of St. Louis went door-to-door visiting businesses in Washington to raise money and get sponsors for the program.

Khoury started the program in St. Louis, and “Pop” was determined to bring it to Washington.

For many years, the Washington Khoury League was one of the few activities available to children during the summer.

Wheatley credits the youth and amateur programs in the region with developing the love and appreciation of baseball that is unique to the St. Louis region.

“Look how people’s moods change when baseball is around,” said Wheatley. “If you’re at the grocery store wearing a Cardinals shirt, and a guy who you would never otherwise talk to says, ‘Did you see that catch Harrison Bader made last night?’

“Strangers talk, and what do they talk about? Baseball. It’s why are we the town where former players come to and get standing ovations, whether they are Albert Pujols or Daniel Descalso, and it’s why a great play made here by the other team will get a tremendous applause but in another city it might get a beer bottle thrown at you.

That appreciation of the game comes from the roots, from the amateur programs, from the days in 1860 when baseball was first played here all the way up through the playground leagues of the ’30s and ’40s to the Khoury League.”

Wheatley captures all of it in “Baseball in St. Louis,” which features hundreds of photos and images from Wheatley’s own collection of memorabilia and collections that have been given to him by others who wanted him to share them with the world.

Before the COVID-19 pandemic and the need for social distancing, Wheatley spent time visiting area retirement homes to talk baseball with the residents.

“When you start talking baseball with, it changes everything for them, especially people in their 80s and 90s. They had a tough life with the Depression, World War II, poverty, shortages . . . But what they did have was baseball, and baseball got them through those times,” said Wheatley.

With “Baseball in St. Louis” Wheatley is preserving the details of the baseball culture here for future generations. Although he wasn’t able to include the stories of every community that is part of the St. Louis metro region in this one book, he loves hearing their stories.

Already he has received lots of emails and text messages from people wanting to share their stories, and he is happy to receive more.

If you have baseball stories to tell, you can contact Wheatley at edjan@swbell.net or, better yet, tell him in person Friday, June 19, at the Neighborhood Reads event.