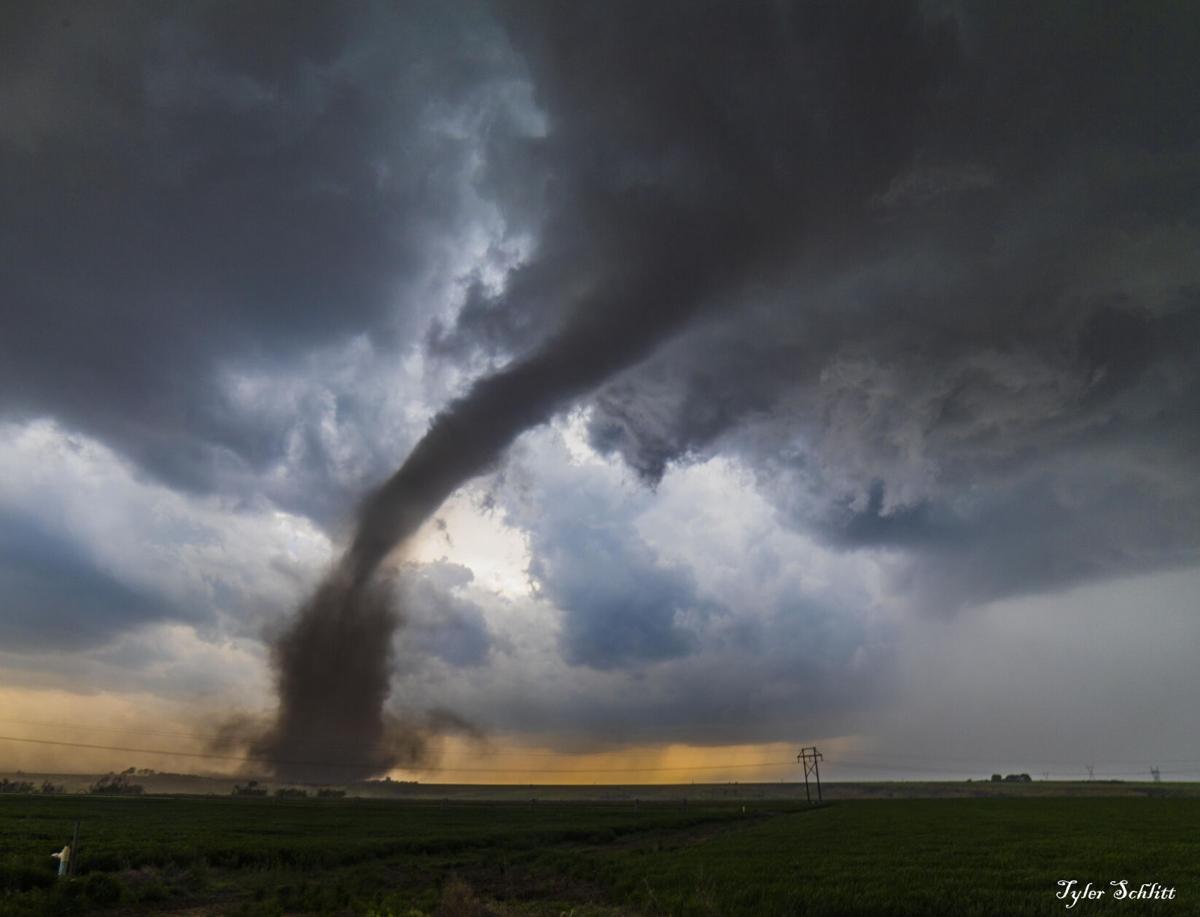 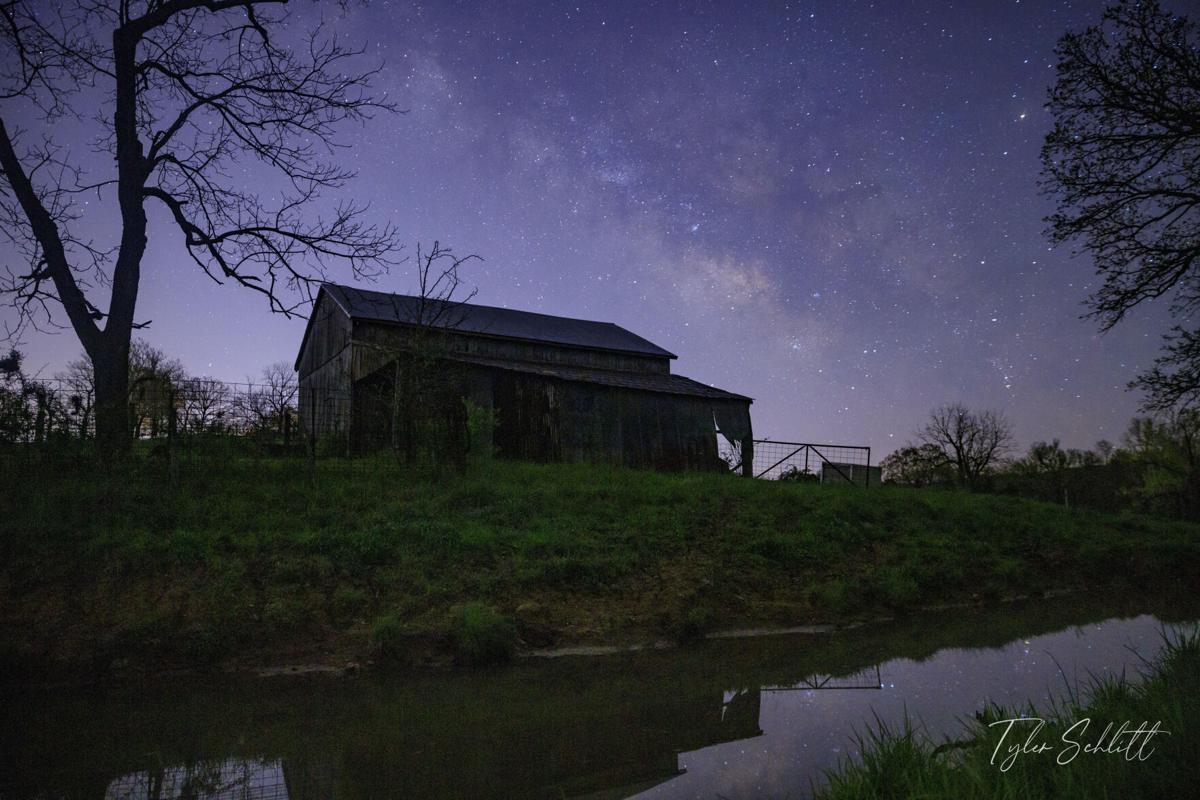 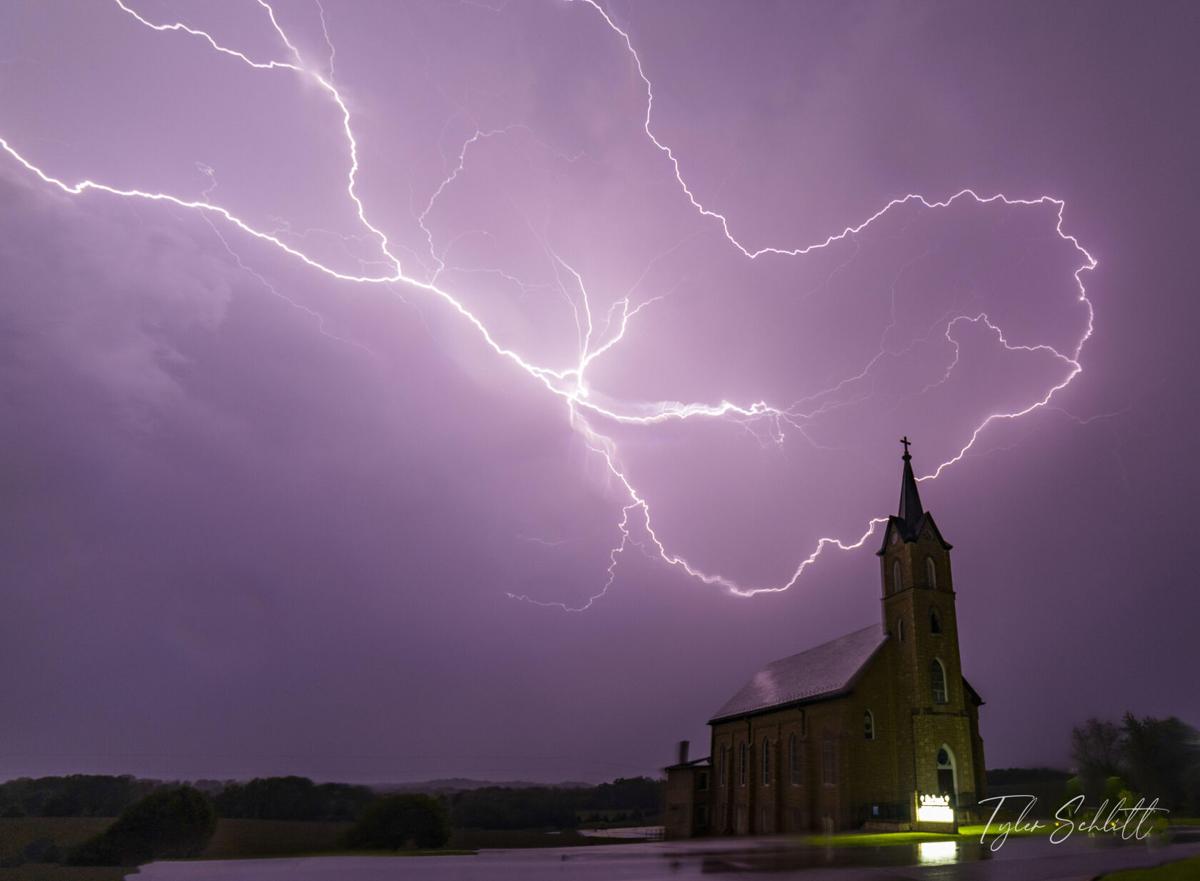 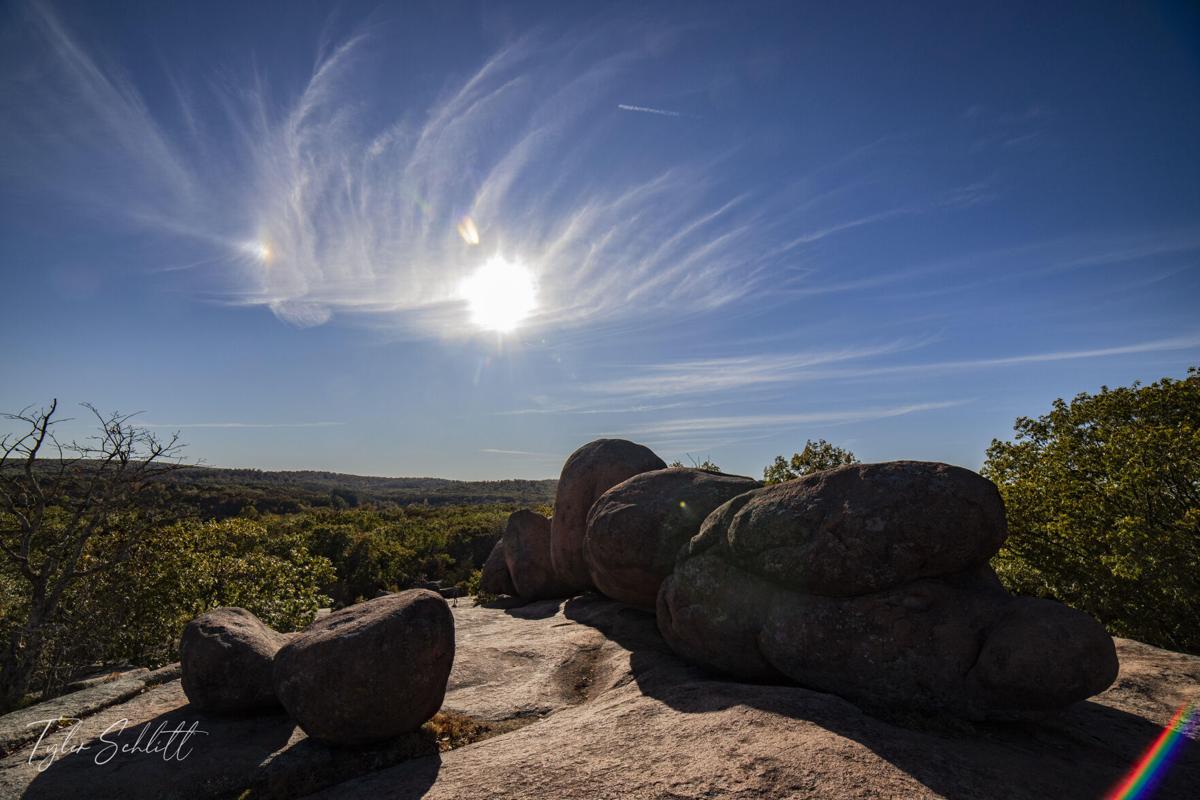 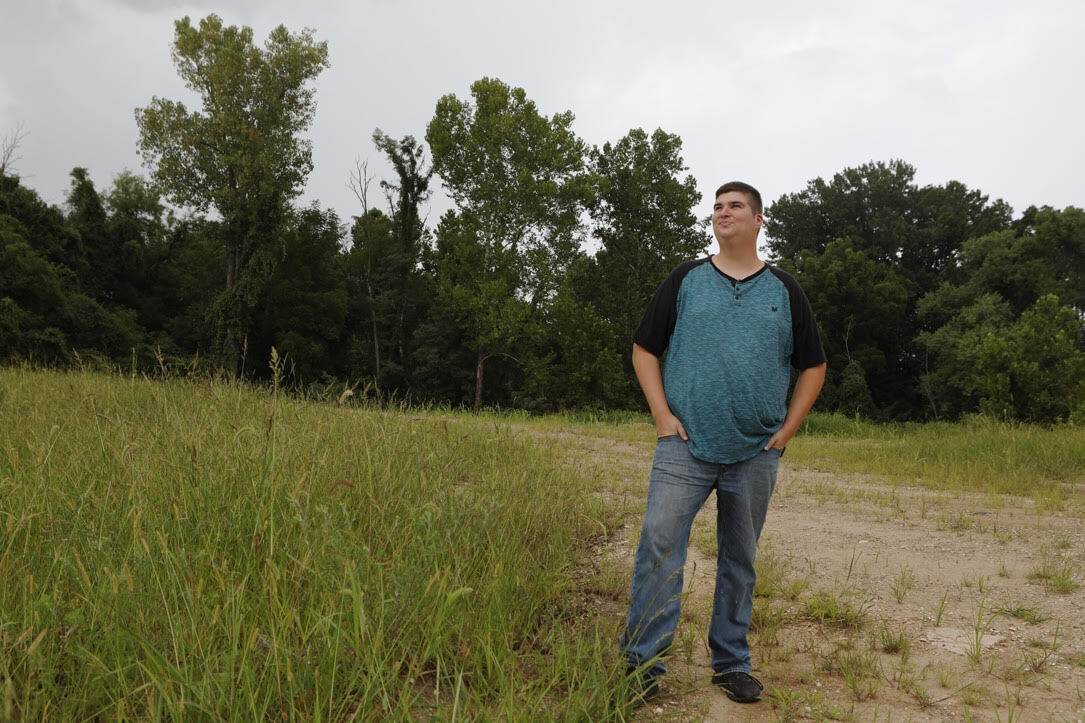 As the days wound down in November of 2018, Washington native Tyler Schlitt made plans to walk across the newly constructed Missouri River Bridge on Dec. 1. As it turned out, though, “Mother Nature had other plans for me,” Schlitt said recently.

Schlitt, a seasoned photographer and storm chaser, had been monitoring the weather forecast for central Illinois. The day before his planned tour of the bridge, he checked the weather models once again and determined there was potential for severe weather in Illinois, including the possibility of a tornado.

He abandoned his plans to walk the bridge and, the next day, headed north toward Illinois.

Two other area storm chasers, father and son Richard and Ryan Thies, joined Schlitt on the chase. Riding in a 2006 silver Chevy Impala, the three traversed the two-lane roads of central Illinois, ultimately covering more than 400 miles over the course of the day and witnessing 13 tornadoes.

Schlitt estimates that he took about a thousand photos that day.

Schlitt has been chasing and photographing storms for 11 years and counting. He has learned a lot about severe weather on his own, and he’s also part of the Metro St. Louis Storm Chasers Association (MSLSCA), a group dedicated to understanding, tracking and witnessing the stuff of storms that most of us try to avoid — darkening clouds, bolts of lightning, bruising hail, and, on a good day, a full-blown tornado.

Given the potential dangers of storm chasing and of severe weather in general, practicing safety and educating others about safety are priorities of the group, Schlitt said.

At 29 years old, Schlitt has built a great rapport with fellow storm chasers, as well as respected meteorologists, including Steve Templeton, chief meteorologist for KMOV-TV in St. Louis.

Templeton and Schlitt met through the MSLSCA. Since that time, Templeton has used Schlitt’s storm photos and videos in his weather updates on Twitter and Facebook and, occasionally, on the air.

Schlitt “has a real talent for capturing the extremes and beauty in nature,” Templeton said.

At the national level, Schlitt has sold his photos and videos to the Weather Channel, WeatherNation and Good Morning America, to name a few.

Even as a boy, Schlitt was keenly interested in weather. When he was 8 years old, he met Dave Murray, Fox 2’s chief meteorologist at the time. It was Halloween at the St. Louis Zoo, and Murray was there, giving a live broadcast.

Murray’s knowledge and descriptions of the weather mesmerized Schlitt. “I thought it sounded so cool, and here was somebody else who liked weather.”

The following spring, Schlitt’s mother, Theresa Schaefer, ran into Murray at a St. Louis Cardinals baseball game. Not long after that, Schlitt received a package from Murray with all sorts of items related to hurricanes — maps, charts, photos, a compass.

“That package was one of the coolest things I had ever received,” Schlitt said.

Schlitt has come a long way since his lucky encounter with the weather guru.

Over the years, he has traveled as far west as Clover, N.M., and as far east as the Georgia-Alabama border, always with the goal of chasing down and photographing yet another tornado.

Remarkably, Schlitt has no formal training in photography, instead relying largely on instinct, trial and error — and the “school” of YouTube.

On a typical storm-chasing expedition Schlitt is usually armed with two cameras, including his Canon 6D Mark II, plus multiple lenses, a video camera and a tripod — all of it an impressive step up from his days in middle school when he was snapping photos of clouds on a cellphone — a flip phone, no less.

Schlitt can recount stories of numerous storm-chasing expeditions he will likely never forget. But one of the best in recent memory occurred last summer when he spent 16 days traveling through Kansas, Oklahoma, Texas, Colorado and New Mexico.

Schlitt had been recruited and hired by Lanny Dean, both a meteorologist for the WeatherBug app and the owner of Extreme Chase Tours, which leads groups of people on storm-chasing vacations throughout the country. Dean, of Rogersville, wanted Schlitt to join him on a tour, to help out with a particular guest, a man named Mark, from the West Coast, who was deaf and partially blind — and who also loved storms.

Dean couldn’t think of anyone more suited than Schlitt to be this guest’s right-hand man. “I needed Tyler. I wanted his enthusiasm, and I wanted his talent as a photographer, but he’s really good with people too,” Dean said.

Schlitt gladly took on the job.

One particular day on the tour really stands out for Schlitt. The group was tracking storms in Kansas. Near the town of Goodland, they saw at least four landspouts (tornadoes that tend to be narrow, elongated and vertical to the ground). From there, they tracked a “monster” supercell (an especially powerful thunderstorm), heading east and south toward Monument where they began to see tornadoes — at least five, by Schlitt’s count.

For Schlitt, the best part of that day wasn’t witnessing all that extreme weather; instead, it was seeing the tour member Mark’s reaction.

“He was blown away,” Schlitt recalled. “He was looking at the supercell, looking at the tornado, watching all the lightning flashes, and he was just so excited.”

Another memorable day occurred that same summer, a month earlier, when Schlitt got what he considers to be some of his best tornado photographs in recent years. It was May 17, and he was in McCook, Neb., with another chaser Randy Dean Hicks (a friend of Lanny Dean’s but no relation). One of the objectives that day was to drop a data-collecting probe on the ground, in the path of a tornado headed that way; the other was for Schlitt to photograph and film the scene as it unfolded.

Shortly after Hicks dropped the probe, it became apparent that the tornado was getting close, fast.

“We ran to the car and drove, literally, 30 seconds from where we dropped the probe,” Schlitt said. And their escape was none to soon. “The tornado probably crossed 50 to 100 yards next to us,” Schlitt said. Still, determined to get the images he had come for, Schlitt got out of the car and proceeded to film and photograph the tornado raging past.

“Even though I only saw one tornado that day, the way I shot it, how close we were — it was simply perfect,” he said.

For the average Joe, being that close to a tornado could be downright terrifying. However, seasoned storm chasers like Schlitt and Hicks, see it differently.

Placing the probe that day and documenting the tornado on camera outweighed any risk, Schlitt said. The data that’s collected through such probes — pressure, humidity, temperature — is eventually analyzed by scientists, with the goal of learning more about tornadoes and, one day, minimizing their deadly impact. “So that we don’t have another Joplin or another Oklahoma,” Schlitt said.

Schlitt is referring to the tornado that ravaged the Joplin area in 2011, leaving more than 1,000 people injured and 158 people dead. In 2013, the tornado that plowed through parts of central Oklahoma, killed 24 people in the town of Moore, including seven schoolchildren.

“We (storm chasers) don’t want the death,” Schlitt said. That’s why the information provided by the probes is so important, he explained. “People are looking for this information, so they can build better equipment to save lives.”

In the meantime, the storm chasers Schlitt knows are always willing to help in an emergency, he said. “If a tornado happens in your town, we’re there. Most chasers, if their head is in it for the right reason,” will immediately end the chase, and, if logistics allow, help with search and rescue, he said.

For many years, Schlitt focused primarily on photographing storms, but a few years ago he decided it was time to branch out. He was in his backyard in 2015, when he took his first photo of the Milky Way, spread over the sky, to the southeast. Since then, he has taken thousands of photos of the Milky Way.

“Now, I look at my shots and think, holy stinking cow, that’s a lot of stinking detail. It’s amazing out there,” he said.

Whatever the subject Schlitt photographs these days, his attention is often still trained skyward. His portfolio includes striking images of comets, meteor showers, a full moon and the setting sun.

Schlitt has also accumulated an impressive collection of photos that capture the beauty of Elephant Rocks State Park, near Ironton. Last December, an exhibit featuring many of those photos was held at the Battle of Pilot Knob State Historic Site, a few miles from Elephant Rocks.

Beyond the natural world, Schlitt has photographed military planes flying in formation at air shows, both in Chesterfield, and Pensacola, Fla.

When Schlitt isn’t immersed in photography, he works in the warehouse of his family’s local business, Country Manor Decorating, owned by his father and stepmother, Steve and Amanda Schlitt.

But his dream is to one day make his living as a full-time photographer.

A Galaxy Close to Home

Schlitt has taken thousands of photos of the Milky Way. This was his first, taken from his backyard in 2015.