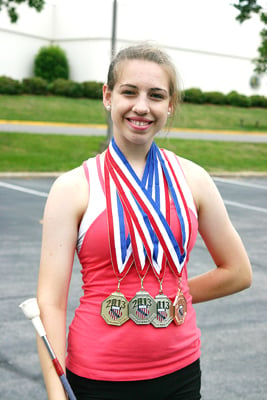 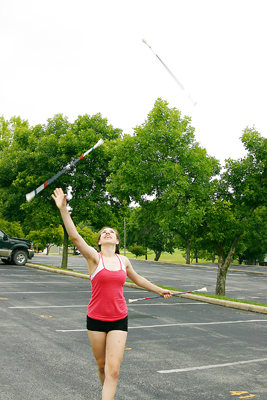 This fall, crowds gathered for the pregame show at St. Francis Borgia Regional High School home football games will be treated to an Olympic gold medal performance in a sport they may not be expecting — baton twirling.

Junior Katelyn Skaggs, who is a member of the SFBRHS color guard, will perform her straight line strut baton twirling routine that she won a gold medal for just a few weeks ago at the AAU (Amateur Athletic Union) Junior Olympics, held this year in Detroit, Mich.

The straight line strut was a new competition area for Skaggs, who has been twirling baton since the third grade. It was the category she performed best in at the Junior Olympics, but it wasn’t the only one in which she medaled.

Skaggs, daughter of Keith and Suzanne Skaggs, House Springs, also brought home two silver medals — one for basic strut (which Skaggs described as marching in a square) and another for X-strut, where you march in an X pattern — as well as a copper medal for fifth place in the solo routine category.

Skaggs typically competes in four to five events each year around Missouri and Illinois (this weekend, she’s competing at the Illinois State Fair), but the Junior Olympics was her first national competition. Standing on the parking lot at SFBRHS with four medals around her neck, she said things couldn’t have gone better.

“I feel like all of my routines were my personal best. I’m very proud of all of my performances.”

Skaggs described her straight line strut routine as a showy display, what people generally think of with baton twirling.

“I do a lot of tosses . . . It’s very flashy and big because on a football field, you have to twirl really big to be seen from the stands,” she explained, noting the routine is performed to march music.

The two routines she won silver medals for are far less showy and more about posture and marching in time with the music.

“In X-strut, the baton never leaves your hand. The majority is about posture, showing a balance, flexibility,” said Skaggs. “There are a lot of leaps and stretches.”

Her solo routine features one baton showing all of the tricks she has learned.It differs from the straight line strut in that there is no march music, so you don’t have to keep in time with the music and don’t have to cover a certain amount of ground, Skaggs explained.

She also has another routine, show twirl, that she placed eighth in at the Junior Olympics, just missing a medal by one place (medals are only given out up to seventh place).

Show twirl is a freestyle routine, often with a theme. Skaggs’ theme was “Rocky” as a tribute to her father, a firefighter at the Affton Fire Protection District who competed for the first time and won at the 2012 Guns and Hoses fund-raiser boxing match pitting firefighters against police officers to benefit The BackStoppers.

The routines often reflect the personality or interest of the twirler — “Harry Potter,” “Mary Poppins” and “Polar Express” are some examples.

This category is all about entertainment.

“You kind of have to twirl and put on that show,” she said. “With my ‘Rocky’ routine, I do a boxing part with boxing gloves on and then I do a jump rope part, then one baton, two baton and three baton.”

Skaggs said she typically wears a different costume for each routine, although that isn’t necessary. Her mom designs and makes all of her costumes. They buy a leotard and she builds off of that.

For her Rocky routine, she wore her dad’s boxing shorts with a red/white tank top.

Skaggs’ mom and her coach, Lisa Bartfeld, attended the competition with her.

Bartfeld said all of Skaggs’ performances were great.

“It was her first national competition, so you can imagine all the clutter that was in her head from the excitement and nerves. Still, she managed to put solid routines in front of the judges, and I think she surprised herself with what she accomplished,” said Bartfeld. “It has been fun to see her grow as a twirler, and watch her confidence soar, perhaps more even from the positive reactions of her fellow twirlers than from the medals around her neck.

“Katelyn is not the first AAU Junior Olympian I have had the pleasure of coaching, but she is probably the most dedicated. She is such a positive young lady, and supports every other competitor whether she knows them or not. Her tenacity, combined with a love of her sport, certainly have contributed to her success.”

Twirling Didn’t Come Easily to Her

“She started doing things with it, and I was so impressed that she asked if I wanted to learn to do things with it too, and I said, ‘Yeah!’ ”

After researching the subject a little, the family found the SugarBabies, Bartfeld’s twirling team out of Ellisville, and signed her up for classes.

Right away Skaggs loved the sport, but she admits she didn’t have a natural talent for it.

“Baton twirling doesn’t come easy to me,” she said. “It’s very challenging, and I always have to practice. But if you practice hard enough, you’ll get it eventually.

“It was a big challenge for me in the beginning. I was not a coordinated child, but I feel like I’ve developed my coordination and balance very well now.”

Bartfeld said Skaggs’ determination is what makes her stand out among other twirlers and competitors.

“There have been many times when most kids would have walked away in frustration, but Katelyn pushes through every challenge and disappointment, continuing to give her best effort,” she said.

“Some twirlers have a talent for twirling — I think Katelyn has a talent for working really, really hard. My role as her coach is to support her and help her prepare, but what happens on the competition floor is all about Katelyn and the best job she can do at that given moment.”

When she was first learning the sport, Skaggs only practiced at her weekly classes. But as she’s become more driven to improve, she’s increased her practice time.

These days Skaggs practices a minimum of two hours a day (not necessarily consecutively) in the summer and tries to fit in at least one hour a day during the school year.

She typically has to practice twirling outside, where there’s room to toss and catch her batons. If it’s raining all day, she’ll practice small skills in the house. (She’s only ever damaged one glass candleholder by twirling in the house.)

Skaggs knows a lot of people may not take twirling seriously.

“They look at it like it’s a pageant sport,” she said — and, yes, she has twirled fire batons once (although she’s hoping to be able to do it again soon).

“I’ve twirled a lot of things actually,” she said, with a laugh, including knives.

But twirling requires a lot of athletic skills and ability, said Bartfeld.

“Baton twirling as a sport today is far more demanding and exciting than the old-fashioned notion of pretty girls in high boots,” she told The Missourian. “Today’s twirlers are all-around athletes.

“Baton twirling requires stamina to get through the aerobic workout that is a twirling routine, skillful timing, coordination and control to place baton and body in the right positions to successfully complete each element, flexibility to properly execute the baton, dance and gymnastics elements of their routine . . . and they have to do it all with a smile on their face!

“Twirling as a sport is starting to gain recognition. The AAU refers to the ‘Twirler of all Trades’ because of all the different athletic abilities twirling utilizes, and the World Baton Twirling Federation says, ‘Baton twirling requires the courage of a hockey player (without the padding), the concentration of a sprinter, the quick reactions of a boxer, and the stage presence and grace of a figure skater.’ ”

To stay in shape, Skaggs practices yoga because it helps best with her flexibility and breathing. She also stretches daily, sometimes twice a day.

And like all sports, there are a number of benefits that come from baton twirling, said Bartfeld, the first of which is that it’s a great cardio workout. But there’s so much more too, she said.

“Baton twirling improves coordination, agility, endurance, strength and balance. Along with the physical benefits of twirling, there are mental/emotional benefits,” said Bartfeld.

“It is surprising to some people when I say twirling is all about physics and math,” said Bartfeld. “As a twirler works to perfect different skills, they have to pay attention to velocity, rotation, the geometry involved in properly placing the baton and the body, action and reaction, precision, timing.”

Skaggs said she is hopeful that twirling as a sport will grow in popularity and is willing to share her ability with others.

SugarBabies offers workshops for groups who want to see what the fun is all about, Bartfeld noted, and she is happy to work with any group that is within reasonable driving distance and has an interest.

“This year, we had a program in conjunction with the Girl Scouts, where we went to several towns and taught the Scouts some basic tricks. Katelyn accompanied me for some and it was a lot of fun.

“We also had a summer halftime workshop here in West County, which we are hoping to expand next year. We would love to come to Franklin County and do a twirling workshop — we always enjoy sharing our unique sport!”

To learn more about SugarBabies twirling classes or about having Skaggs and her coach talk to a group about twirling, visit www.itwirl.com and click on Contact Us or send an email to sugarbabies@itwirl.com.