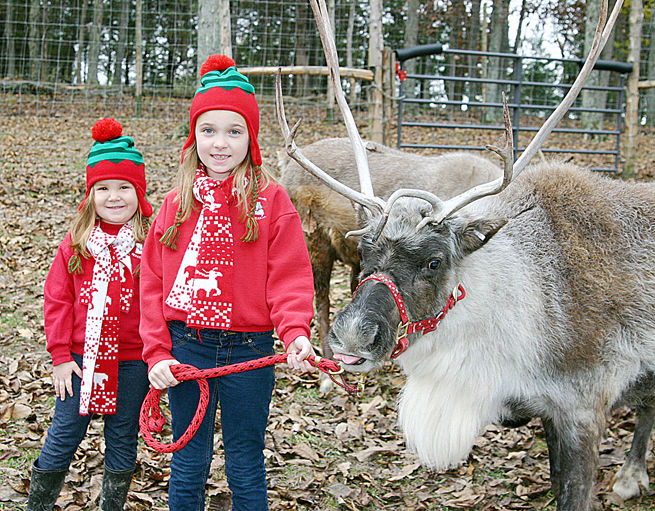 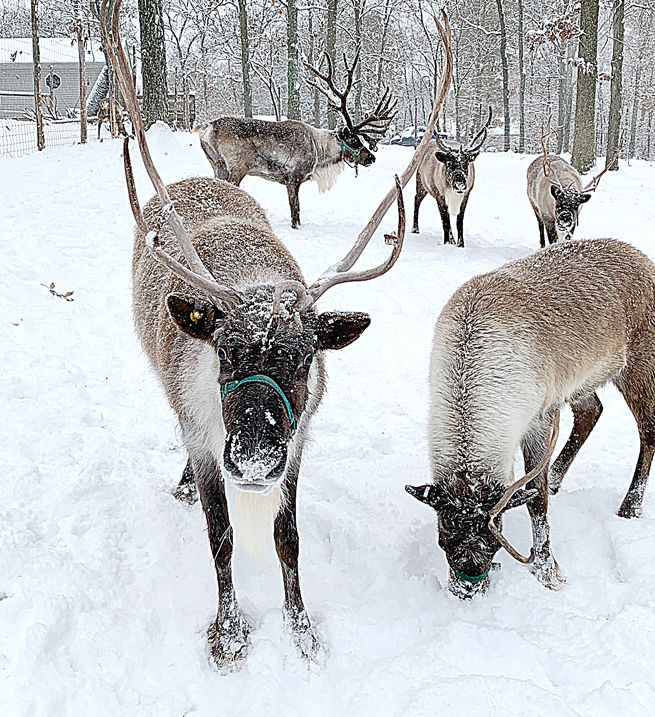 The 4 to 8 inches of snow that fell across Franklin County last week delighted schoolchildren like it was Christmas morning. The nine reindeer living on a farm in Robertsville felt the same way.

“The reindeer love the snow, as you might expect,” said Kari Scull, who owns Show-Me Reindeer with her husband, Jeremiah Scull. “As soon as flakes start falling, they go for a run. They run around like mad, leaping in the air.

“They use their wide hooves like shovels to dig in the snow for forage,” she said, noting the reindeer actually prefer to eat the snow rather than drink water from the trough. “It’s never too cold for them.”

One year when it was just 5 degrees outside and even colder with the wind chill, the Sculls had to take turns standing outside with the reindeer for an event. They kept their truck running and one would wait inside until the other got too cold.

“The reindeer loved it,” said Kari, with a smile.

If you thought Missouri is too far south for reindeer to live and thrive, the Scull family has a surprise for you. Not only do they have a team of reindeer that lives on their 5 1/2-acre farm, they breed and raise them too. And they are hoping to expand the team next year through successful breeding.

“We have two cows (female reindeer) that could be bred, so we’ll see if they have healthy calves next spring,” said Jeremiah, noting that the terminology for reindeer is different than white tail deer. “With reindeer, their terminology is the same as cattle — bulls, steers, cows.”

This time of year, the Sculls love sharing their reindeer with the public, taking them to events all across Missouri. This year they had 40 events scheduled throughout November and December.

You may have seen a couple of them in Washington at the Olde Fashioned Christmas event held at the Washington Farmers Market, 323 W. Main St. They have come every year since 2014 and will be in town again for the event this Sunday, Nov. 25, from 3 to 5 p.m.

There is no charge to attend.

The Sculls do a good number of city events like that, but they also go to businesses, like senior living centers, golf courses, banks and grocery stores, who hire them for holiday promotions for their customers. And they have visited schools before and private parties.

“We have the sleigh set up next to the corral and people can get in the sleigh, and they can take pictures,” said Jeremiah.

For safety purpose, they don’t allow any petting of the reindeer.

“We run a perimeter chain around our corral. That puts a little distance between the public and the reindeer,” he said. “In the wild, their antlers are for defense, and it’s real easy for someone to be poked, so we want to be safe.”

All of the weekends leading up to Christmas are already booked, but the family is available on Christmas Eve night for quick 30-minute sessions at people’s homes.

“This is new,” said Jeremiah. “We want to see if people are interested in this. Most of our events are two or three hours long . . . But for this, people will open up their door and boom, there are two reindeer in their front yard with a sleigh, Santa Claus and bag of presents, here early to share Christmas.”

As a firefighter for Pacific, Jeremiah and his family are used to celebrating Christmas whenever they can. There have been years where he has been on duty for Christmas. And their youngest daughter, Audrie, was born just a few days before Christmas, so the have learned to be flexible when it comes to their own holiday celebration.

The Sculls were inspired to add reindeer to their family farm years ago after taking their older daughter, Addie, to the Orschlen Farm & Home store in Pacific where a vendor from another state had set up a pen with a reindeer and was charging people to have their photos taken with it.

In talking with the vendor, the Sculls learned that there currently wasn’t anyone in the metro area who had reindeer to offer this kind of service, so they looked into what it would take to care for a reindeer in St. Louis — known for its summertime heat and humidity.

After joining the Reindeer Owners and Breeders Association to better educate themselves on the proper care and treatment of reindeer, the Sculls began upgrading their farm to meet the USDA requirements. That involved adding 8-foot fencing around the property.

Then in September 2014, the family made a trip to the “North Pole” to collect their first two bull calves and bring them home. In 2015, they added two more reindeer — the mother and father of those first two calves — to begin a breeding operation and expand the herd.

The first reindeer calf to be born on the Sculls’ farm was Snowflake, born April 19, 2016. Later that year, the family twice returned to the “North Pole” to bring home another three reindeer to introduce a new blood line to the team.

The newest member of the Scull herd is Clover, who was born on St. Patrick’s Day this year.

“We started off with a couple of deer and 10 or 11 events that first year. It’s built up to this — nine deer and 40 events over two months,” said Jeremiah. “Now there is such a demand, they’re even calling us from Illinois.”

The family is planning to purchase a second trailer and more gear so that they will be able to hold more events. They wouldn’t necessarily double the number of events in their two-month window, but it would allow them to book multiple events on the most requested days, like the first weekend in December.

That’s also why the family is hoping to expand the herd even more.

“I want to make sure that if we are going to take on more events, we have enough deer, because we rotate them out,” said Jeremiah, noting they only take two deer to each event. “We’ll take two deer to an event on Saturday, so those two deer will be off on Sunday. Two other deer will go on Sunday.”

It’s not that the events are a lot of work for the reindeer, but anytime they are loaded in a trailer and taken away from home is stressful for them, said Kari.

“So we just want them to have that time-off, that time to be back at home, relax and play,” she said.

“We want them all to be healthy and well rested,” added Jeremiah. “You don’t want to over tire any of them out.”

The reindeer do travel well in the trailer, he said.

“I have a camera in there, and we watch them as we drive in case there is a problem, but they travel very well.”

The Sculls interact and talk with their reindeer more like they are their pet dogs than livestock, and the family is very protective of them.

“They are our family,” said Kari. “I’m home with them all day. I come out here all the time to make sure they are doing well. They know their names; they know who I am.

“They are very curious animals, and they each have their own personality,” she said.

Addie, 9, and Audrie, who will be 6 next month, help care for the reindeer. That includes taking them for walks — not for exercise, but for training and to make them more docile.

“They are domesticated like cattle, but to get them where we can walk them on a lead rope requires training,” said Jeremiah. “If you didn’t do anything with them they would be as wild as regular farm livestock.”

They like to lay around a lot, similar to cattle.

“Even when we take them to events, they are up for a little while, but then they lay down,” said Kari. “They eat, lay down, eat, lay down.”

The reindeer eat several small meals a day, said Jeremiah, noting they will eat a variety of grasses, dry hay, and a pellet ration that the family provides twice a day.

“It’s a pellet ration that’s blended with beet pulp,” said Jeremiah. “It’s formulated for deer, but tweaked for reindeer. This is reindeer feed. It took a long time to get something right for reindeer here. It started out they were tweaking horse feed, but with studies, trial and error, they’ve gotten a close recipe on what the reindeer need in the lower 48 as far as nutrition.”

Helping the reindeer survive the St. Louis area summers is not as challenging as you might expect, the Sculls said.

For starters, they shed their winter coat for a thin, dark chocolate brown summer version. The family helps the reindeer along in the shedding process by brushing them routinely as the days gets warmer.

Kari had been using the fur to make ornaments that featured a picture of the reindeer, but with nine reindeer, she had far too much fur to keep up.

Even with their summer coats, the heat in June, July and August can be a lot, so the reindeer limit their daytime activity and make a point of staying in the shade, either in their pen or out in the woods, or they lay in front of a line of large fans the family has.

Antlers Are Fragile When Growing

In spring when the reindeers’ antlers are growing, they are covered in a fur-type coating that’s referred to as velvet.

“When their antlers are growing, they’re very delicate and break easy,” said Jeremiah. “They are blood rich . . . the inside is very porous, very high in blood. It’s growing on a daily basis.

“In the summer, the inside of the antler turns into bone,” he said. “And this time of year, that outside (velvet) starts to strip off like a banana peel.”

The Sculls have a couple of large brush devices where the reindeer can rub their antlers to help that along. Or the family has helped at times too. The timing is different for each reindeer, the Sculls noted.

“Then over winter, the antlers fall off for males and females, and they start the whole process over again in the spring,” said Jeremiah. “It’s a yearly cycle.”

The family has collected all of the shed antlers from each of their reindeer. They use them for education purposes.

“That way we can compare a 5-year-old bull’s antlers to say a bull-calf antler, or Momma Dasher, who is almost 12 compared to Dancer, who is 2,” said Kari. “We can compare sizes and genetics. Every reindeer has a different antler genetic on how they grow.”

Dr. John Stoltz of Washington Veterinary Clinic cares for the Sculls’ reindeer. He makes farm visits, when necessary, and the family also has taken the reindeer to his office.

The U.S. Department of Agriculture agent comes to the farm at least once a year for a surprise inspection.

“We also have to give him a list of all the events we go to so he can even go on the road to inspect us,” said Jeremiah, noting it’s all done to make sure they are taking proper care of the animals.

“That’s for traction and digging in the snow for food,” said Jeremiah. “They have long hair around their hooves for traction on ice.”

• Their fur is hollow to help insulate them from the cold.

“It’s also extremely sensitive to touch,” said Kari. “If a fly lands on them, they will shake it off. They will go for a run to try to get away from it.”

• They only fly on Christmas Eve.

You can watch a video of the reindeer playing in the snow posted on the farm’s Facebook page at https://www.facebook.com/showmereindeer/.

For more information, go to http://www.show-mereindeer.com/ or to contact the Sculls, call 314-401-7458 or email them at showmereindeer@gmail.com.