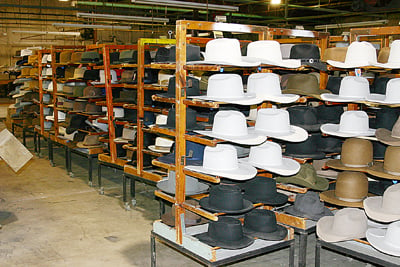 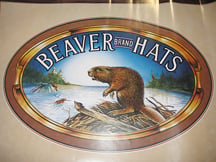 The only noise that could be heard inside the Beaver Brand Hats plant in New Haven last week was the squeal of a compressed air machine as a couple of longtime employees used it to clean up the facility, equipment and hundreds of hats left behind when the company ceased production last October.

The ladies are preparing the plant for a public liquidation auction being held this Saturday, July 20, at 9 a.m. (A preview will be held Friday, July 19, from 9 a.m. to 2 p.m.)

The sale is open to anyone, and while there will likely be people from the hat-making industry shopping for things like equipment or material, Doug Klabzuba, Villa Ridge, who owns the plant with his father-in-law, Ken Lowrey, expects there will be many more who are just curious.

Beaver Brand Hats has been a part of the New Haven community since 1928, back when it was known as Langenberg Hat Company.

People who once worked for the company, or whose parents or grandparents did, may want to get a peek inside the factory, maybe even bring home a piece of local history in the form of a wooden hat block, Beaver Brand Hat box or old (canceled) stock books dating from 1899 up through the 1920s.

“That’s probably the most interesting things I’ve run across,” said Klabzuba, referring to the stock books.

It’s all on the auction block — old metal printing dies, trim rings for hats that salesmen would carry with them in meeting with retailers, hat display racks, shelving, sewing machines, rolls of fabric, wood pattern pieces, antique chest of drawers . . . and, of course hats, all kinds of them.

There’s also all of the equipment, which may appeal to more than just manufacturing insiders, but also to home decor retailers.

The sale also will include all of the office furniture, supplies and the 42,000-square-foot building.

“The goal is to sell everything,” said Klabzuba.

You don’t have to be a hat-wearer to be sad or nostalgic about this factory closing. Beaver Brand Hats dates back to 1860, when the line got its start in St. Louis.

In cleaning out the plant and preparing for the auction, Klabzuba found a small notebook that lists the company’s “genealogy.”

In 1918, the company took on the name many in this area remember so well — Langenberg Hat Company

Klabzuba had not worked in the hat business before he and Lowrey purchased Beaver Brand Hats. He’s an engineer with an MBA who moved to the area from Tulsa back in 1992 when he went to work at Spray Dynamics in St. Clair, which Lowrey owned.

Around 2000, after Lowrey sold his half of Spray Dynamics, he and Klabzuba began looking at companies they might want to buy.

“We had looked in Misssouri, Kansas, Oklahoma, a little into Arkansas,” Klabzuba recalled. “We looked at 20 companies, got into coversations with eight to 10 of them, and into negotiations with about four of them.

“I thought we were going to buy one in Arkansas, then Sept. 11 happened.”

That brought their search back to the local area. A woman that Klabzuba’s wife worked with suggested they look into the Beaver Brand Hats company, so they did.

“Hats weren’t on our radar, but when we walked through the plant, the phone was ringing off the wall, the fax machine was full of orders. We were . . . pretty convinced it had just been mismanaged, and we felt we could come in and provide the leadership for the company to survive,” said Klabzuba.

The new owners managed to turn the company around for a time by doing things like diversifying their product line (adding straw hats and an import line, for example), but other factors worked against them — namely, the economic downturn that came around 2008 followed by a warm winter in 2011 that left many retailers with full store shelves/warehouses and no need to reorder merchandise.

The final blow came when a major customer that Beaver Brand custom-made hats for began delaying orders it had already placed in summer 2012.

The custom hat orders the company filled for this customer were among the three types of hats made at the New Haven plant. The other two were structured felt hats (western, outback or crossover, and dress styles) and a winter cap line.

“Our process really was custom,” said Klabzuba. “Because of the way we were set up, we could combine any crown with any brim shape. So we would make to order.”

The Beaver Brand Hats plant in New Haven averaged around 20 employees over the last several years, but by the end that number was down to about 12, said Klabzuba.

Most were long-term employees, many with between 25 and 35 years with the company, back to the days when it was Langenberg Hat Company, said Klabzuba.

In 1993, the company became employee owned. That seems to be around when the company hit its peak, Klabzuba noted.

At one time, Langenberg Hat Company had several locations around the area, in Berger, Owensville, New Haven, Washington, Marthasville.

After Langenberg’s president died unexpectedly in the late ’90s, the company went through some “tough times,” said Klabzuba.

The bank closed it in 2000, and the company was holding an auction when American Hat Company out of Texas stepped in to buy the New Haven plant.

‘Beaver Brand Will Live On’

Klabzuba is as sad as anyone to see the Beaver Brand Hat plant in New Haven closed for good.

“I feel bad for where we are. I feel bad for the employees, for the community,” said Klabzuba, who is out of work and looking for a job.

But there may be one bright spot. Klabzuba still owns the Beaver Brand Hat trademark and is working with another manufacturer to make the brand to those specifications.

“So the Beaver Brand (Hats) brand will live on,” he remarked.

The factory is going away, but Klabzuba is hopeful that the historic name will continue. No doubt customers are hopeful too. A quick search of the web finds comment after comment from people who are sad to see this “American institution” shut down.

“The Beaver Brand name has endured as a respected part of the hat industry,” the villagehatshop.com had on its site. “New Haven, Missouri, has been the home of one of America’s best and most experienced hat production lines since 1928. Second- and third-generation hat-makers provide customers with some of the finest felt hats available today.”

Berkeleyhat.com out of Northern California referred to Beaver Brand Hats as “the longest running hat company in the U.S.”

A blogger at The Inspired Traders Vintage Voice wrote this about Beaver Brand Hats:

“Just saying the names releases the magic of the Old West, spurring a memory, story or song.

“The Beaver Brand Company has died, and another piece of America and Americana has died with it.

“Since 1860 Beaver Brand made hats by Americans for Americans . . . Their moniker was ‘Beaver Brand — Always a Standard of Quality.’ They delivered exceptional quality in timeless styles; it was one of the few companies in the world where you could custom order a hat to your specifications.

“Their hats are a part of the western collective consciousness and they will be missed. It was said in the Old West a person could tell where you were from by the type of hat you wore. In many ways it’s still true today. You can go anywhere in the world, if you’re donning a cowboy hat, you’re American.”