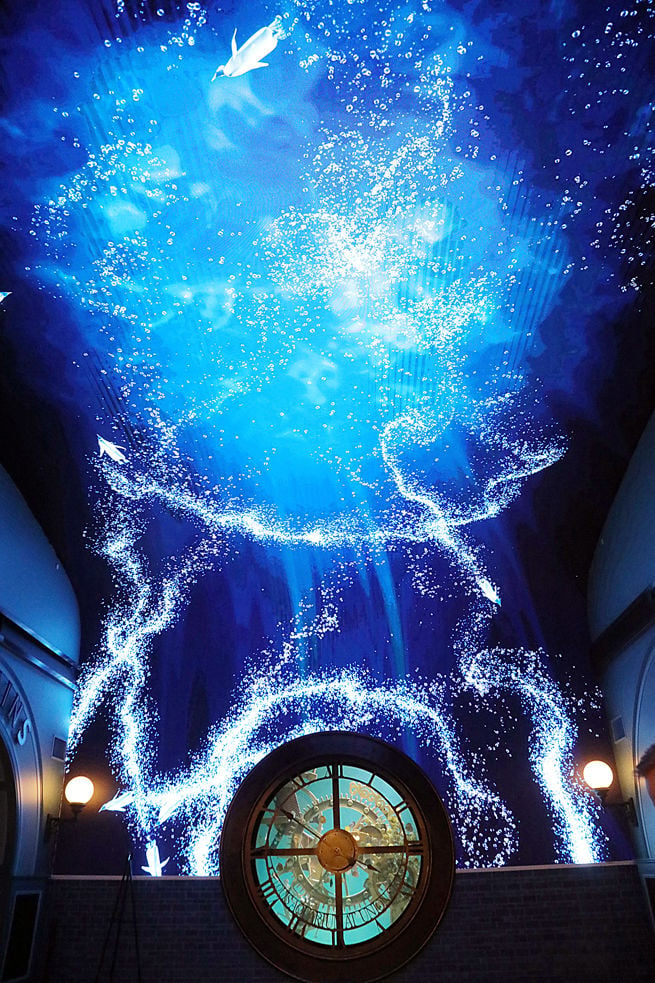 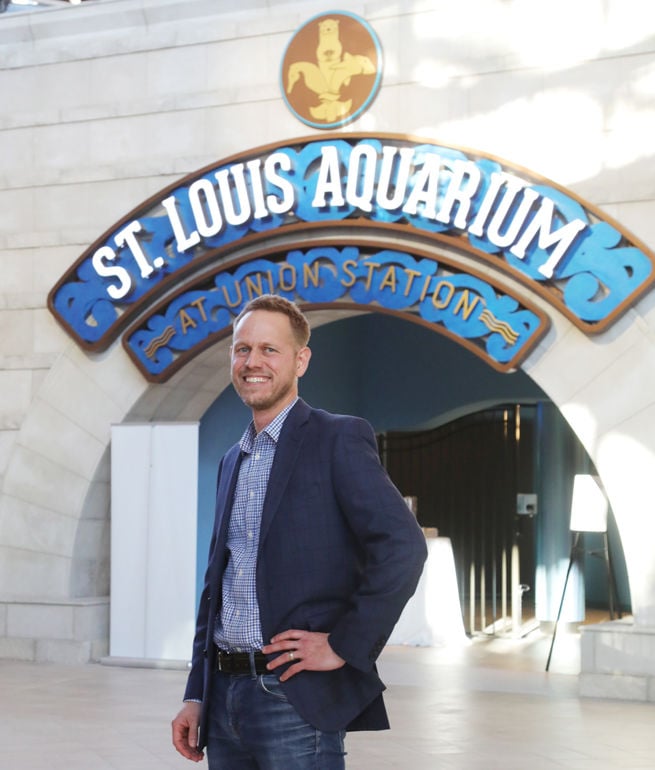 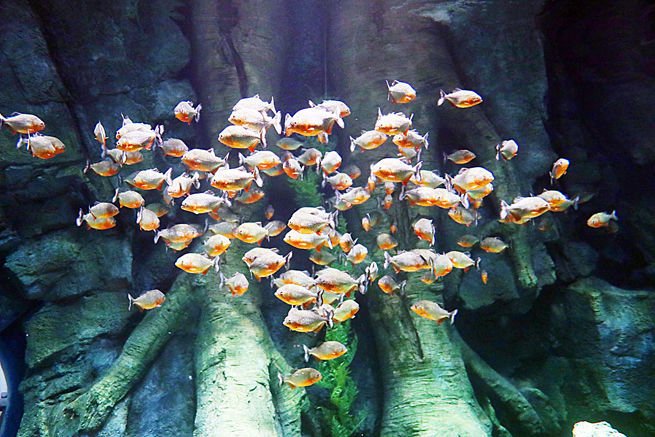 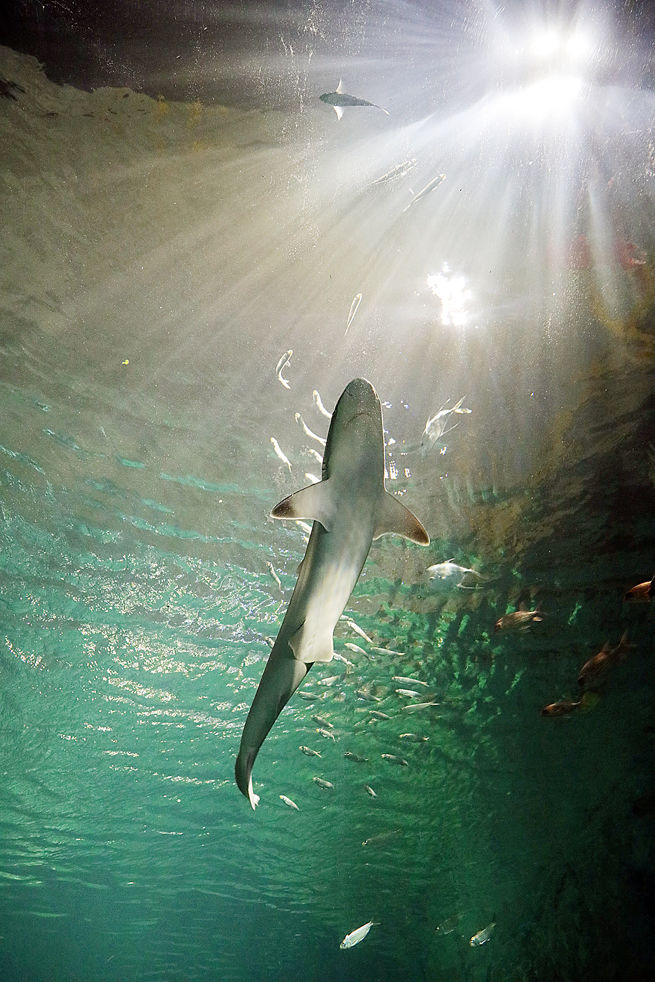 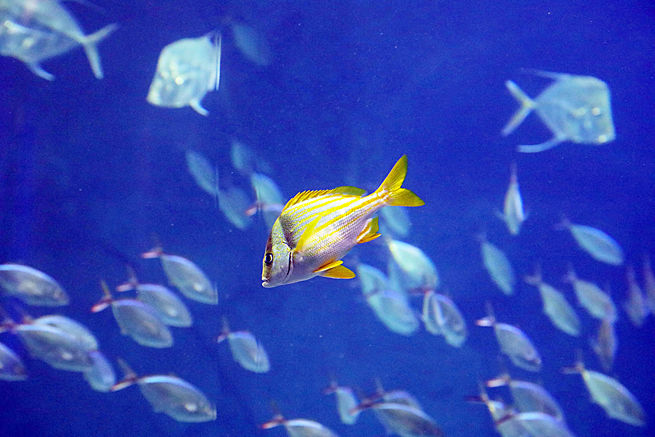 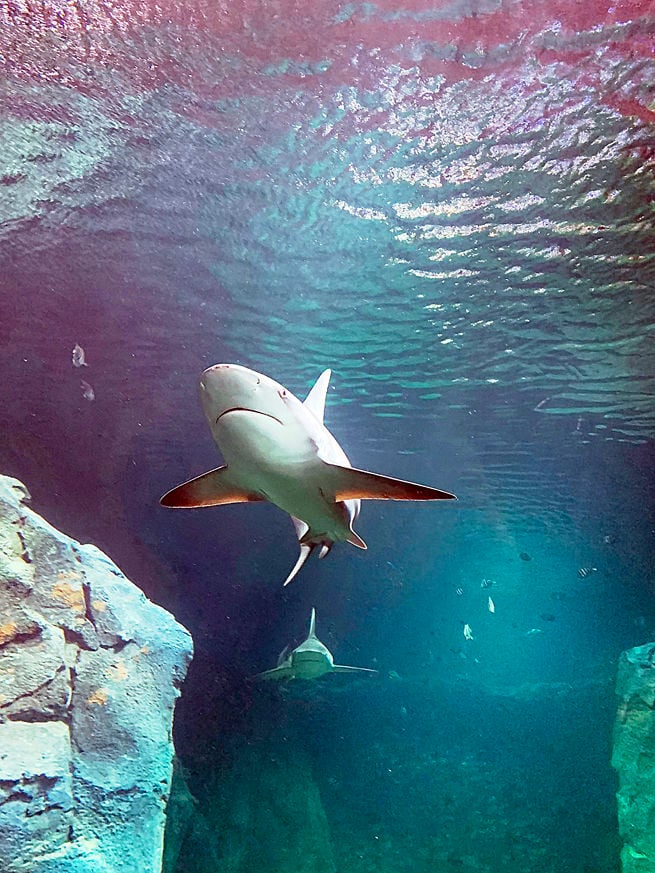 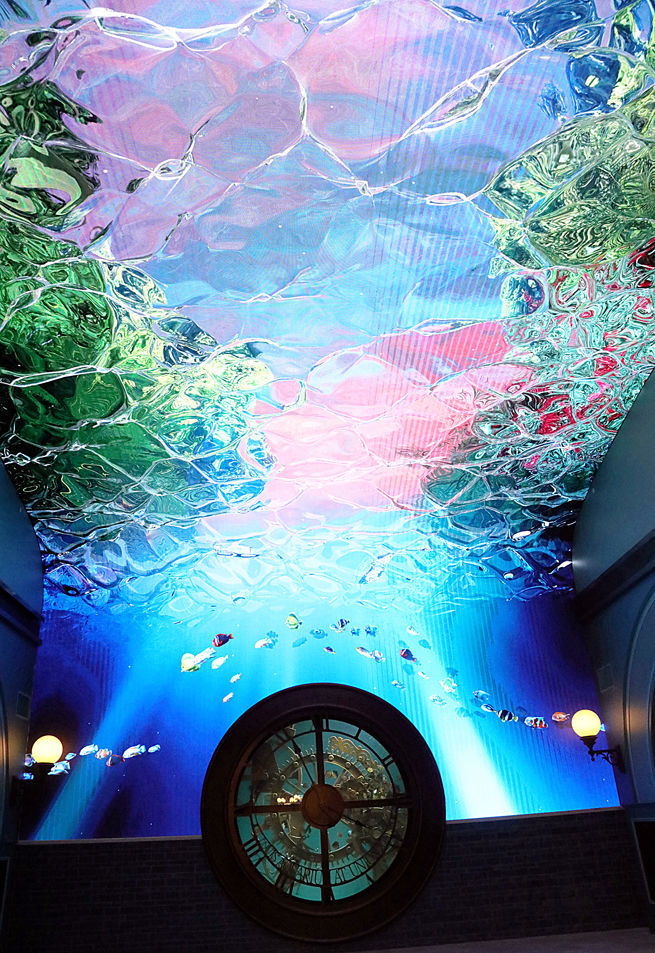 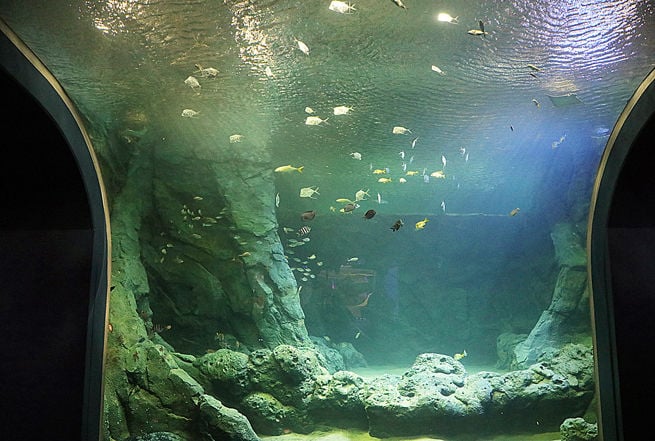 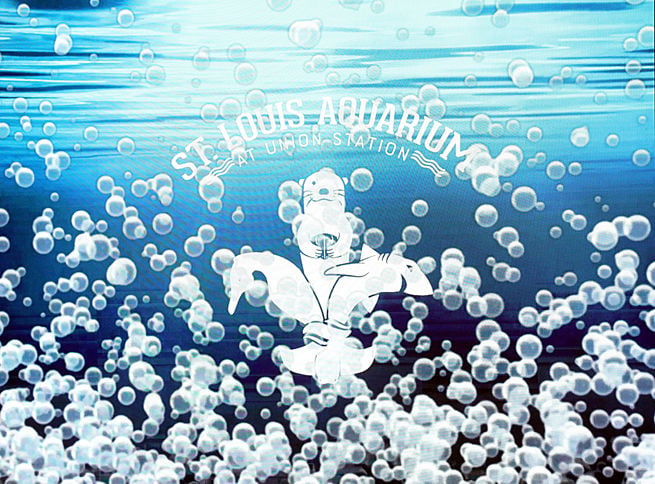 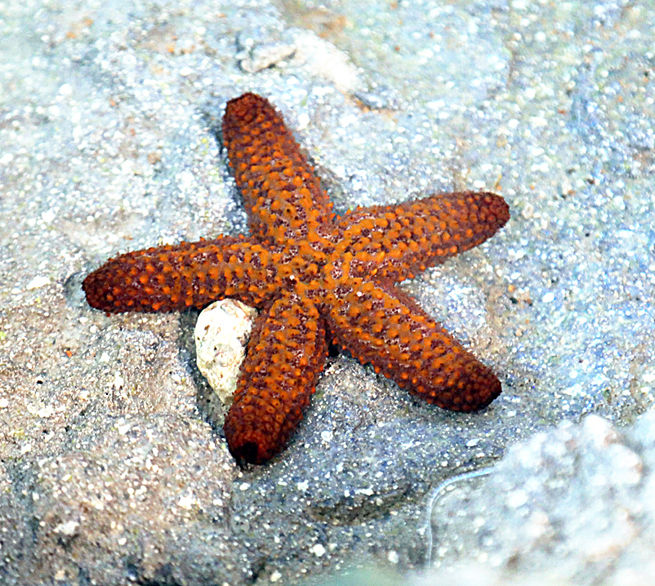 Standing outside of the new St. Louis Aquarium that opens Christmas Day at Union Station, Shawn Brinker, a 1996 graduate of Washington High School, who served as on-site project manager of the massive, two-year job for McCarthy Building Companies, smiled as he recalled one of his earliest building efforts.

He was around 9 years old and wanted to build an Adirondack chair.

“Ever since I was a kid, I always loved working with my hands and building things,” said Brinker. “My grandpa, Leander Brinker, after he retired, he built doghouses, birdhouses, picnic tables, and I would help him.”

A local business provided them old pallets that they tore apart for the lumber. Eventually Brinker began building his own birdhouses and doghouses that he tried to sell in his front yard.

“Just to emulate my grandpa,” he remarked.

When Brinker was ready to tackle making an Adirondack chair, he started with a trip to Walmart to study the ones for sale there. He used his arm to take some loose measurement and get an idea of size, and then got to work.

The chair turned out really nice, and that summer Brinker entered it in the Washington Town & Country Fair home ec contest. But he was surprised and a little disappointed by the results.

“I think I got a red ribbon and there was a note on there that said, ‘Are you sure you didn’t get help with this?’ ” Brinker recalled.

Looking back now, Brinker understands that the home ec judges probably questioned his work because of his young age, but he knows that he alone was responsible for the work.

More than 30 years later, Brinker is quick to credit the team around him that built the new aquarium.

“A construction project is a team effort for sure,” he said.

The son of Rich and Mary Jane Brinker, Washington, Shawn, who lives in Frontenac, is a 20-plus-year construction industry veteran. He joined McCarthy Building Companies right out of college and has worked his way up to on-site project manager.

He is a graduate of the University of Central Missouri and is accredited as an LEED green associate and certified health care constructor.

Brinker has spent his career building challenging projects across the country. Locally, he worked on several landmark jobs, including the Lumiere Place Casino and Hotel development, renovation and expansion of the Gateway Arch Visitor Center, and the Heart Hospital and Children’s Tower at Mercy’s Creve Coeur Campus.

But building the aquarium has been the highlight of his career thus far.

“It’s been the most fun,” said Brinker. “You’re building a home for sharks and stingrays! We really had a great team, and everyone is excited about it. It’s something that everyone’s talking about.”

The project was also challenging, and not just because demolition depended on working from “as built” drawings from the late 1800s when Union Station was built while being careful to protect and preserve the original columns, footings and foundation. And historic construction restraints provided limited access to certain areas, sometimes allowing less than two feet of space.

But the team also had to be extremely careful in building the exhibits, which are made with aquatic concrete.

“It has an add mixture in it that when it is introduced to water it starts to crystallize and basically plugs up all the pours in the concrete to create a water-tight containment,” Brinker explained.

“McCarthy does a ton of concrete work around the country, but we had to make sure that the first time we did this, we did it right. A slight error while we’re placing the concrete would be very costly . . . so we did a lot of pre-planning, a lot of testing of the concrete . . . a lot of mock-ups.”

There also were challenges in installing the acrylic glass used throughout the aquarium. Panels range in size from 3-by-3 feet to as large as 16-by-18 feet. The largest panel weighed nearly 14,000 pounds and had to be placed inside the footprint of the exhibit prior to the concrete structure being completed.

In terms of size, the aquarium is 120,000 square feet spread out over two stories. It features 13,000 aquatic animals from fresh water and marine environments around the world.

One of the major highlights is the 250,000-gallon saltwater shark tank, which is home to more than 60 sharks and stingrays.

In addition to all of the fish, sharks, stingrays and other aquatic life, visitors to the aquarium will be mesmerized by all of the technology on display from start to finish. In fact, the technology is probably one of the most notable things that sets the new St. Louis Aquarium apart from others people may have visited, said Brinker.

One of the first features visitors encounter is the barrel-shaped LED screen in the aquarium’s Grand Hall that plays a variety of eye-popping shows on the ceiling overhead, making you feel like you are under the water looking up.

There also is a 3-D virtual reality train ride that honors the history of Union Station’s railroad past. Passengers “board” the multimedia train, where they will hear St. Louis native John Goodman narrate a film showcasing some of the city’s history and landmarks before “returning” to Union Station.

Once you get off the train, you head into The Confluence, featuring a Mississippi and Missouri river tank with fish from rivers in this specific region.

Playful otters (a trio named Sawyer, Finn and Huck), piranha and doctor fish (which will eat the dead skin off of your hand, if you place your hand in the tank) are just some of the highlights.

Shark Canyon features an acrylic J-wall that arches high over the heads of visitors. The Deep section takes visitors on a journey through the depths of the world’s oceans to meet the animals that live there.

The second floor includes a variety of interactive exhibits and touch tanks to create a hands-on and hands-wet experience.

“There are lots of interactive areas. It’s very sensory and education oriented,” said Brinker, adding that there is even an area that allows children to learn how rivers and erosion work.

Finally, throughout the aquarium, there are interactive touch screens where visitors can select a fish to learn more about it.

“You can learn about the fish in this specific tank, or if you recall something you saw in another tank, you can select the aquarium map to go to another tank,” Brinker noted.

Part of a Family Entertainment Complex

Designed by local architect Theodore Link, Union Station was opened in 1894. It closed in 1978 when Amtrak relocated its St. Louis station and reopened in 1985 as a festival marketplace with a variety of shops.

It was purchased by Lodging Hospitality Management (LHM) in 2012.

Timed tickets are available for purchase online at www.stlouisaquarium.com. Annual passes also are available at $55 for one person, $100 for two people, $135 for three and $160 for four people.

For more information on the St. Louis Aquarium at Union Station, visit www.stlouisaquarium.com.