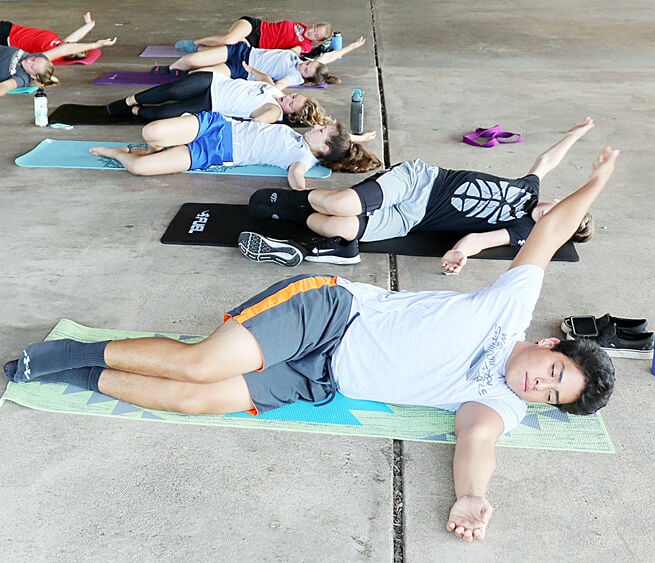 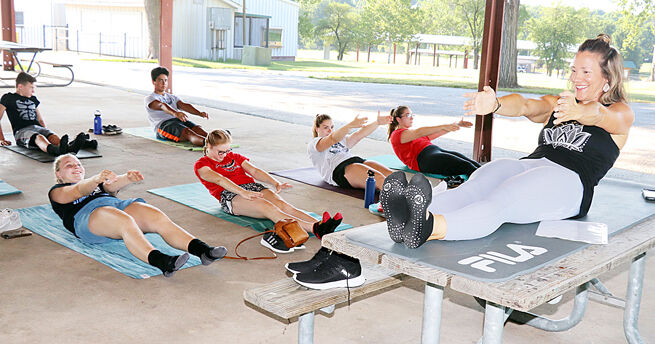 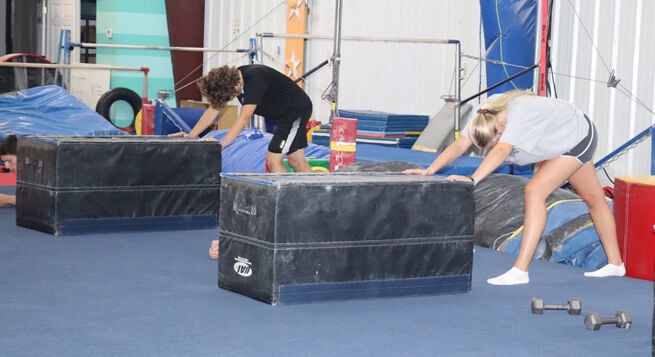 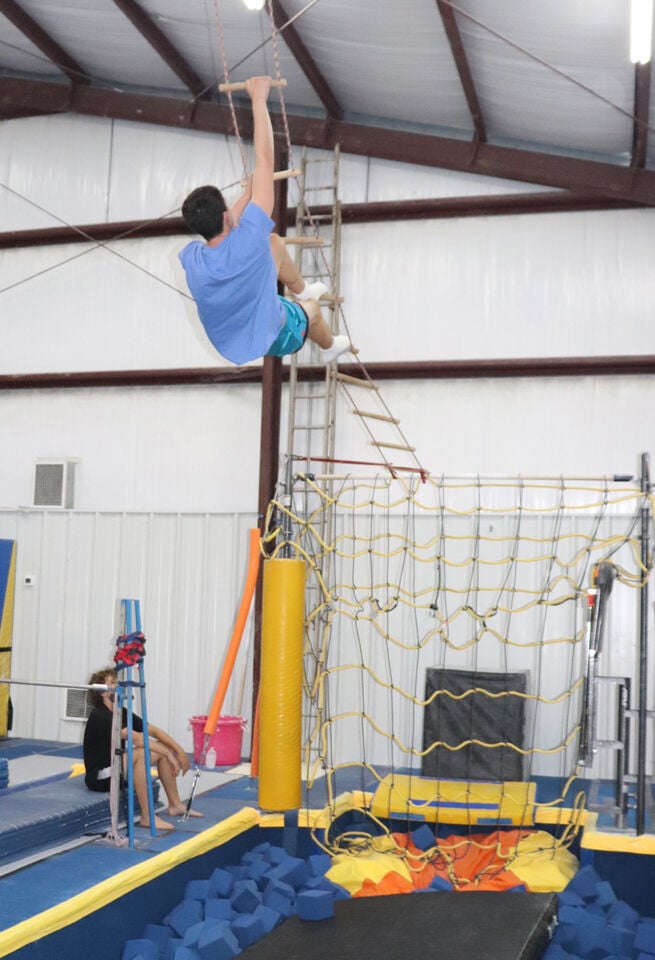 It’s a stretch to imagine the blue spring floor at Planet Gymnastics in Union as a pool, but competitive swimmers from teams across Franklin County have been doing their best this summer.

With socks on their feet and their arms stretched out in front of them, hands resting on a large foam mat normally used by gymnasts, the swimmers kept their heads down as they prepared for a relay race.

“Ready, go!” Melinda Poole, who co-owns Planet Gymnastics with her husband, Scott, shouted, and the swimmers lunged forward, pushing their mats across the floor and back four times to simulate a relay race in the pool.

Meanwhile, their teammates were completing various exercises on the floor — some using their body weight, others with dumbbells. The catch was they had to keep going until their relay partners had completed all four laps across the floor.

“So the faster they push, the less exercising their relay team has to do,” Poole said. “It’s fun!”

The Pooles, whose son, Gavin, is a competitive swimmer on three teams, created a special fitness and conditioning session for swimmers this summer at the request of local swim coaches, like Tracy Moreland of the Washington Stingrays. “With the local swim teams canceling their swim season and local pools delaying or canceling their opening, many swimmers were left with nowhere to practice,” Moreland said.

It has helped that Four Rivers Area Family YMCA opened its indoor pool to area swimmers through a special swim clinic, but the swim coaches sought out additional swimmer-focused, land-based training for their athletes.

Along with the Pooles, Erin Gaugh with Radiate Pilates, Augusta, put together a weekly Pilates for Swimmers class. Some 20 swimmers attend each session, held under the Family Fun Center pavilion on the Washington Fairgrounds.

Both Planet Gymnastics and Radiate Pilates are into their second session of land-based training for swimmers.

Swimming is considered one of the best full-body workouts a person can do, but that doesn’t mean the athletes don’t have weaknesses.

“We address stiffness in the thoracic spine (rib cage area) and work on the upper back muscles,” Gaugh said, adding that swimmers also can have poor control of their shoulder blades from the repetitive motion in their arms and shoulders, reduced firing of the gluteal muscles and tight calves.

“Swimmers are notoriously inflexible, so (Pilates) is a good program for them. They are protracted, and we try to open them up.

Gaugh begins each class with breathing exercises, since breath control is key to Pilates, but also critical to the success of any swimmer.

The swimmers admit they have been surprised by the intensity of the Pilates workouts and the benefits they’ve seen.

“To literally quote myself after the first day, ‘Pilates is not yoga,’ and I totally underestimated it,” Aubri Moreland, a member of the Washington Stingrays, said. “I do yoga, but when I came here, I was limping away.”

Many of the swimmers who signed up for the Pilates sessions also are working out at Planet Gymnastics. The program offers a mix of conditioning exercises with fun activities like the mat relay race.

“We have Ninja Warrior-style stuff, and we are using our trampolines a little bit as well, but all of the exercises are centered around what is good for swimmers, land training that will help when they are in the water,” Poole said.

“Core is essential, but we are also working on the leg muscles used in kicking and also the different groups of arm muscles, because different strokes use different parts of the arms, shoulders and back. My husband used to be a swimmer, so he understands that significantly well, and he also is our head team coach for the gym.”

One of the swimmers’ favorite activities in the program is what the Pooles have dubbed the “Zombie Ladder,” where a swimmer climbs a rope ladder up to the ceiling and then drops into a foam pit. And some days the Pooles have an inflatable obstacle course set up for the swimmers to race through.

“We’re trying to incorporate a lot of fun into it, but still make it physically demanding,” Poole said.

Swimmers are dropped off and picked up at the pool back door (located off of Grand Avenue). All swimmers have their temperatures checked before they can enter the pool deck.

They are not allowed in the locker rooms, and parents are not allowed to watch from the viewing windows, Schneider said. The pool also is closed to members during the swim clinics.

Part of what is uplifting about the swim clinic is that it has brought together swimmers who would otherwise be competitors at area meets to train together.

Kathleen Westfall, who coaches the Pacific Pirates summer league team and also for the Y, said the decision to create a swim camp this year was a direct result of the pandemic and having fewer swim opportunities for the athletes.

Initially the plan was to offer the clinics only to swim team members, but in the end they were made available to anyone who wanted to participate.

The various swim coaches designed the workouts and training.

“This is a great way to keep the swimmers in shape and active at a time when they aren’t swimming in meets as a result of COVID,” Westfall said. “We have athletes who were wanting to keep going, who have college dreams, high school qualifying time dreams, and all of that.”

And like other sports, swimming does not lend itself to taking long breaks, Moreland said.

“You have got to stay in the water and keep practicing,” she said. “So it’s great that the Y opened the pool to swimmers this way.”

Jennifer Molitor, who coaches the St. Francis Borgia Regional High School boys swim team, said most of her returning swimmers are taking part in the Y’s swim clinics. Some are going four days a week and some are only going twice a week because of other workouts, like the Pilates for Swimmers and the cross fit for swimmers offered at Planet Gymnastics. Some also are doing personal training.

“I am very appreciative of how much each swimmer has taken control of their own training this summer and how inventive they have become due to a lack of public pools,” Molitor said. “Many have started lifting and doing cardio on their own. I was a little worried about what shape they would be in this season since they are usually coming off a summer swim season, but I am not worried now. I think they will be just fine.”

Diane Jones, who is a U.S. Masters swimmer, Y volunteer coach, and coach of the St. Francis Borgia Regional High School girls team, said she is enjoying helping all the swimmers get through this unusual summer.

“During the shutdown, I remember running into some swimmers, having a Zoom meeting with other swimmers. They looked good, but a bit saddened. They missed the pool — I did too. Having them back here (at the Y), working out, has put the smiles back on their faces and the sparkle in their eyes,” Jones said. “It’s a return to at least some modicum of normalcy. I’m very grateful to the Y for providing this opportunity to kids and to lap swimmers. Just add water!”