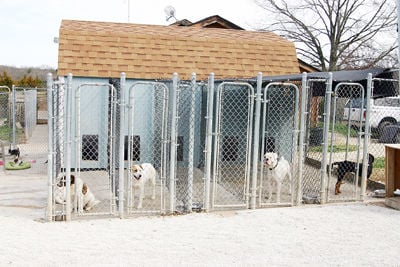 She finds homes for them all, or keeps them until she can.

Five years ago Faltemier set up Dog Saver, a no-kill dog shelter on the 8 acre property she and her husband, Doug, own off Highway AJ. But Faltemier admits she has been rescuing dogs for many more years than that.

The first were neighbor dogs that showed up at her door often hungry, but occasionally hurt. One that she calls Brown Dog started coming around in 2002.

“He would come over, hang out, eat and leave, go back home,” said Faltemier.

She bought him a flea and tick collar and began looking out for him. One day he came over and she noticed he was limping and his hip was extremely swollen, so she took him to the vet who told her the dog had been shot.

“Little pellets from a shotgun were in his hip,” said Faltemier. “Then we found out he was heartworm positive, so I had him treated for that too.”

Back home Faltemier went to the neighbor to inform him the dog was now hers.

“He didn’t care. He tried to tell me it wasn’t his dog,” she recalled. “I told him the dog was mine, so please don’t shoot at him anymore. I handed him my number and said, ‘Call me if he comes onto your property, I’ll be happy to come get him.’ ”

A year later another dog, a female akita, began showing up. At one point, Faltemier noticed this dog was pregnant.

“She would come and eat and then she disappeared, and I didn’t see her for a while. When she did show up again, she was no longer pregnant,” said Faltemier.

Several weeks later, the dog walked across the street to Faltemier’s property, this time with two of the pups following her. Later Faltemier followed the mom to find where the other puppies were and if they were OK.

She discovered six more pups in a drain ditch and brought them back to her house to care for them. She contacted a rescue organization, which took seven of the puppies, and the Faltemiers kept one.

That experience led the family to get involved in fostering dogs in need of temporary homes while they waited to be adopted, which led Faltemier to get in touch with more rescue groups.

As animals in need of help continued to find Faltemier, she eventually realized they are her passion.

“I thought nursing was going to be my calling,” said Faltemier, who previously worked as an aide with plans to be a med tech when she injured her back and needed to have surgery. “But I love doing this. This is my passion.”

Now Faltemeier works as a bus driver on an as-needed basis and spends the majority of her time caring for the rescued dogs who live on her property.

Dog Saver is an all-volunteer organization. Faltemier and her daughter, Paula Finder, handle the day-to-day work, but her husband and other children, even her sister, help in their spare time, lending their expertise in various areas (IT, Web design, construction, fostering . . . ) to the cause.

Other volunteers help run the organization too.

Since she founded Dog Saver in 2010, the organization has rescued and placed over 1,000 dogs with new families. The longest a dog has stayed with Dog Saver before being adopted was three years, said Faltemier.

A 501(c)(3) nonprofit organization, Dog Saver is licensed by the Department of Agriculture, which means it is subject to annual inspections.

Dog Saver takes in between 200 and 350 animals each year. In 2010, it adopted 100 to 150 animals, Faltemier noted. Already this year, the organization has arranged the adoptions of 40 dogs.

“We get 30 calls a day from people wanting to turn in dogs,” said Faltemier.

When the shelter is full, as it is now, the organization has to turn away some dogs, but there are plans to expand the facility so more dogs can be rescued.

The event will be held Saturday, April 25. Sign-up will be at Bourbeuse Valley Harley-Davidson in Villa Ridge from 10 a.m. to 1 p.m., and the run will end at New Haven American Legion at 5 p.m.

Barbecue will be served all day at the Legion Hall, and an auction will start at 6 p.m. followed by a dance at 8 p.m. with music by Trilogy.

All vehicles are welcome at the event, which will be held rain or shine.

Funds raised from the event will be used to build a second structure that will have kennels with runs for more dogs, a vet room, bathing room and an office so Dog Saver has a place on the property to handle adoptions. Currently Faltemier has adoptive families meet her at Petco in Washington or PetSmart in St. Charles.

Appointments are needed for anyone to visit the Dog Saver shelter.

There also are outdoor kennels that have sun tarps so the dogs can have some shade areas and all concrete pads. And there is a large fenced-in area where the dogs can run and play.

Faltemier recently purchased an old dogcatcher van which she uses to transport dogs to and from adoption events at Petco and PetSmart.

All of those expenses (the new kennels, concrete, van . . . ) are paid for out-of-pocket by the Faltemiers, she said. The funds collected from adoption fees go toward providing health care and daily care of the dogs.

“All of our dogs are spayed/neutered, microchipped, vaccinated, de-wormed, and HW/FIV tested and prevention given prior to adoption,” said Faltemier.

“Puppies receive three distemper/parvo shots and other vetting once they reach 6 months old.”

Donations also help make this possible, said Faltemier, noting that Petco and PetSmart have both donated dog food to the organization.

Foster homes also are key to Dog Saver’s success, said Faltemier. The organization currently has seven foster homes that take in dogs until they can be adopted. Faltemier would love to have more.

“I am desperately looking for foster homes,” she said. “We have a foster application online (www.dog-saver.org).”

She prefers foster homes have a fenced-in yard, but that is more to guarantee that the dog will have time to run around and get exercise.

“I don’t want a dog on a leash tied up outside,” said Faltemier. “I provide them kennels, food, everything.”

Many of the Rescues Were Abused

The dogs that come to Dog Saver are rescued from all over, and many were being abused.

“Blue came from Belle where a man used to beat on him and starve him, but he’s very sweet,” said Faltemier as she snuggled with the big white dog, who is still noticeably thin although she said he has gained weight recently.

“You could see every bone in his body and he had every worm known to mankind,” she said.

People who adopt dogs through Dog Saver find out about the group through events at local pet stores, but also through the website, Facebook page and listings on Pet Finder.

The furthest anyone has ever come to adopt a dog was an American military base in Germany. Actually, after much research and planning, Faltemier sent the dog to the serviceman, although she said she won’t ever do that again.

“It was so traumatizing for me,” she said, noting she worried about the welfare of the dog the entire time and insisted the man call her the minute he picked up the dog so she could know the dog wasn’t stuck somewhere frightened and alone.

“It’s just that all of the dogs we take in, I get so attached to them,” said Faltemier.