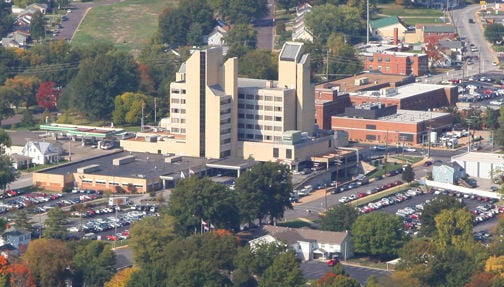 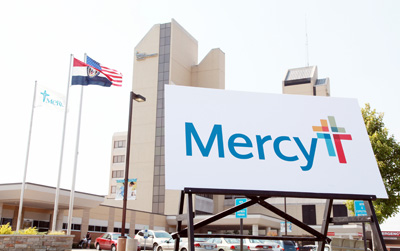 Forty years ago, the community celebrated the grand opening of the newly constructed St. Francis Mercy Hospital, a modern structure and symbol for advanced health care close to home.

While it has a different name today, Mercy Hospital Washington stands for those things more so today than it did then — and it has gone on to become a hub for the region’s complex health care needs.

“Mercy was privileged to take sponsorship of the hospital when construction was underway,” said Sister Mary Roch Rocklage, who was president of what was then St. John’s Mercy Medical Center, (now Mercy Hospital St. Louis.) “We were so impressed with this community. We shared the same goals and values. We wanted to serve this community that had worked so hard to create a hospital for themselves and their neighbors.”

The community had raised more than $1 million to build the new hospital while loans provided for the remaining costs. Then, on July 31 and Aug. 1, 1976, hospital employees made the physical move from the old St. Francis Hospital into the modern, eight-story, $14 million building that offered space for new services, technologies and future growth.

“It was a hectic and exciting day. We were moving patients by bed, wheelchair and ambulance through the underground tunnel and across Highway 47,” said Ellen Havelka, a registered nurse who started working in the recovery room in 1962. “We planned ahead; we had to make sure everything was perfect for patients during the move. We didn’t schedule any surgeries, but we did a C-section. Some things can’t wait. Our first surgery, on our first day in the new hospital. I’ll never forget it.”

Some people wondered if the big hospital would take away some of the hospital’s small-town charm, the kind where people know each other by name and are always friendly, but that turned out not to be the case.

“It was just like family at the old hospital, but things can’t always stay small. We hoped it would stay like family, and it did. And it’s just like family now,” said Nancy Eckelkamp, who started working at the hospital in 1969. “It goes back to our values and the desire to help others. Those things don’t change.”

Forty years ago, the “new hospital” served a population of 75,000. It also offered a kinship to Mercy Hospital St. Louis for patients who needed access to expanded specialties in the city. Today, the 155-bed hospital serves a population of 180,000 and offers a level of advanced care in emergency, heart, cancer, stroke and obstetrics usually reserved for larger cities.

It has earned accolades including a Healthgrades Patient Safety Excellence Award and an “A” grade in patient safety from The Leapfrog Group. The hospital was named a Top 100 Great Community Hospital by Becker’s Hospital Review and is accredited by the Joint Commission.

It recently introduced 3-D imaging for the most accurate breast cancer screening, added a new wave of linear accelerator, the first of its kind in Missouri, for the most precise targeting of cancer cells, and added a Level II designation to its stroke care center.

“Mercy’s vision today is to bring as many advanced services to patients as possible, rather than asking patients to drive great distances,” said Terri McLain, who served as president of Mercy Hospital Washington from 2006-’16 and is now president emeritus. “We’re investing in telemedicine, virtual care, and, of course, bringing more specialists to more communities, so we can offer newer services with their expertise leading the way.”

Mercy’s physician pool expanded from Washington to Cuba and beyond in 2012 when it merged with the region’s other major health care provider, Patients First. The merger integrated dozens of primary care physicians and specialists with the existing hospital services and staff.

“The merger allowed us to give patients the best of what we each had to offer, and that led to more advanced services,” said Dr. David Chalk, president of Mercy Clinic, Mercy’s physicians’ group, and former president of Patients First. “Another great service we share is a patient’s electronic health record. Having this information on one chart, electronically, is potentially lifesaving — and something that hadn’t been dreamed of 40 years ago.”

Even more doctors have joined Mercy since then. To keep up with their expertise, ever advancing medical technologies and an effort to enhance the patient experience, hospital spaces have been remodeled and expanded, and hospital services have been added to other Mercy locations throughout the years.

Mercy knew one service was lacking and worked hard to bring it back to in 2014.

“So many people in our community are suffering with mental health disorders and addiction and so many go untreated because help is so far away. We wanted to change that,” said McLain.

In December 2014 Mercy Behavioral Health opened. The program assesses, diagnoses and treats adults struggling with mental illness and dependency. Patients meet with a psychiatrist and therapy team for individualized and group counseling.

“Patients learn about their diagnosis and how to manage it so they can have more positive, productive lives,” said McLain. “They learn about self care, coping skills, medicines that could benefit them and lifestyle changes.”

Looking ahead, the community can count on Mercy providing compassionate care and the most advanced medicine possible. There will be continued facility improvements, as always, and services provided based on the community’s needs.

‘Next 40 Could Be Miraculous’

Today, Mercy is working with select area businesses about providing health care to their employees in an effort to keep health care costs down. Also, hospital patients can look forward to using MyMercy Bedside, a Mercy-provided tablet for patients to use during their stay that will help them stay on top of their health report.

As for long-term plans, the next 40 years is for dreamers and doers.

“The future of medicine is as far as our imaginations take us. What medical researchers and geneticists are discovering and working toward is astounding,” said McLain. “If you thought the last 40 years of science and medicine were overwhelming, the next 40 could be miraculous. Cures for diseases and ailments we never thought possible are within reach. We’re close learning how to prevent them.”

Most Valuable Asset — the People

Yet as the technology has evolved in the past 40 years, the hospital’s most valuable asset remains the same — the people who are called to serve there. “The dedication and passion of our co-workers and volunteers, whether they serve on the hospital community ambassador committee or in the gift shop, is truly inspiring,” said McLain. “It’s a mission to share one’s time, talent and passion to care for our friends and neighbors when they’re most in need. It’s true of a physician or nurse at a patient’s bedside, a volunteer knitting lap quilts to keep our cancer patients warm, a cook nourishing patients and guests and our board members giving their time and acumen to guide our hospital. We couldn’t provide excellent quality, compassionate care without each and every one of them.”

Mercy is the largest employer in Washington and Franklin County with 1,284 co-workers and 119 physicians. In 2015, its economic imprint included providing $4.1 million in medical care to people who could not otherwise afford it and an additional $583,000 in community benefits, such as health education and free screenings.

As part of its outreach mission, Mercy Hospital Washington is affiliated with Hermann Area District Hospital. The partnership allows for rapid transfer of critical patients to Mercy hospitals. Mercy also offers consulting services, access to a variety of programs as well as staff training and development.

Mercy Hospital Washington has been growing with the community for 40 years, but the hospital’s roots go back much farther. Local residents, motivated after a 1918 flu epidemic, raised money to build Washington’s first hospital.

“It’s never lost on me that people are attached to our hospital — their hospital — as if it’s a living being,” McLain said. “It’s not just a hospital; it’s a place of memories. Many generations have contributed to its existence. It’s where we have said meaningful last goodbyes. It’s where we were born and have given birth. It’s where we’ve gone to feel better, and where we’ve made attachments to each other. It’s so much more than a building, and we’re proud to recognize its 40th anniversary this year.”

Co-Workers to Be Recognized

Many co-workers working at Mercy Hospital Washington now were working during the transition into the new hospital the summer of 1976. They will receive special recognition from Mercy this year. They are:

Virginia Lee Painter, hired in 1959, is a nurse anesthetist in anesthesiology.

Nancy Eckelkamp, hired in 1969, is a patient support associate.

Jeannette Siess, hired in 1970, is an RN in the intensive care units.

Marie Lingenfelter, hired in 1972, is a quality improvement coordinator.

Christine Ballmann, hired in 1973, is a RN in the operating room.

Debra Egli-Marfisi, hired in 1973, is an ultrasound technologist in radiology department.

Diane Hagedorn, hired in 1973, is supervisor of environmental services.

Judy Rubach, hired in 1973, is a radiation therapy technologist at the Mercy Cancer Center.

Lora Copeland, hired in 1974, is manager of the ICU departments.

Mary Pursley, hired in 1974, is a histology technologist in the laboratory.

Pamela Griffin, hired in 1974, is a mammography technologist in the radiology department.

Helen Ballmann, hired in 1974, is a radiologic technologist in the radiology department

Ruth Stolte, hired in 1975, is a cardiac operations assistant.

Diane Overschmidt, hired in 1975, is an ultrasound technologist in the radiology department.

Phyllis Cassette, hired in 1976, is manager of patient safety.

Denise Wallach, hired in 1976, is a medical lab technician in the laboratory.

Michael Horstmann, hired in 1976, is a mechanic in plant operations.

Maureen Michels, hired in 1976, is an account coordinator in the business office.