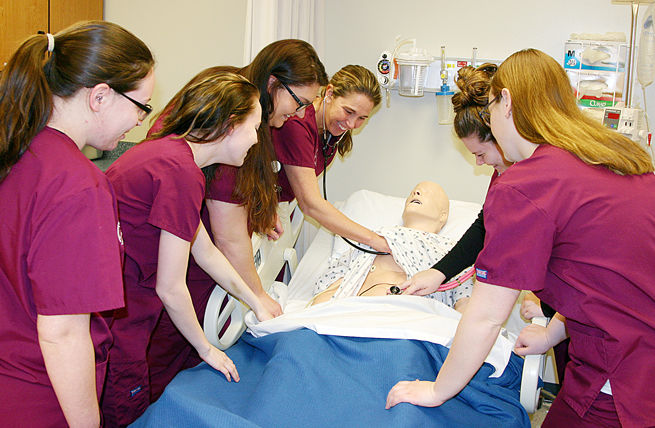 Washington School of Practical Nursing students listen to lung and bowel sounds on one of the school’s simulation mannequins. 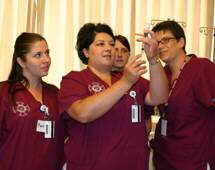 Washington School of Practical Nursing students listen to lung and bowel sounds on one of the school’s simulation mannequins.

If you’re being cared for by a nurse somewhere in Franklin County, the odds are good that they started their career as an LPN student at the Washington School of Practical Nursing.

In the 50 years that the one-year program has been offered, it has graduated more than 1,000 LPNs, or licensed practical nurses, who have gone on to work in a variety of environments — hospitals, long-term care facilities, schools and more.

For Administrator Chris Redd, RN, MSN, who has worked at the school for 19 years, that is a major source of pride.

“Any nursing facility that you walk into in the area has our graduates, which is kind of cool for us to see,” she said.

“A lot of people have this thought in their head that when you are an LPN, you work in a nursing home. That’s your only option. But that’s so not the case,” Redd stressed. “It is a big option, and they pay well, but LPNs can work acute care.”

She was recently a patient at Mercy Hospital Washington and was pleased to have several WSPN graduates caring for her.

“I kind of joked with them, ‘Remember you liked me!’ ” said Redd, with a laugh. “But really whenever I go up to the hospital, I see our graduates working in the OR, taking care of patients, they’re working in the doctors’ offices; I see them everywhere.

“And they’re all so excited to come tell me what they’re doing now,” she said. “They recognize that we have a good program and it taught them a lot, prepared them to start working.”

Heather Choate, RN, BSN, who graduated from WSPN in 2010 and now serves as director of nursing at St. Clair Nursing Center, where she often hires graduates of the Washington program, said there is no better start to a nursing career than graduating from WSPN.

“The great thing about the program is it starts with absolute basics of taking care of someone,” said Choate. “It doesn’t skip over anything, like how to make a bed properly or how to change someone. It’s almost like a fast CNA coarse, and you learn those skills first before you get into the body systems and learning how normal body systems should function.”

Deanna Armfield, who is the nurse manager on the medical-surgical pediatrics floor at Mercy Hospital Washington, agrees. She said the LPNs she has hired out of the Washington program are able to hit the ground running.

Because they complete their clinical training hours at Mercy, they are already familiar with the set up

“Their orientation periods are sometimes shorter just because they are used to the environment,” said Armfield, who also was quick to credit the WSPN instructors for their role.

“We often have busy days on the unit, and (Chris Redd) gets her students up and involved in absolutely everything going on. Even if it’s not their patient, but if there is something to be done, they come right in and help,” said Armfield, adding that the instructors have a way of developing a “go-getter” attitude in their LPN students.

“They are always willing to be part of a team, which is important, and willing to get involved to get the job done,” she said.

Over the last two years, Armfield has had the opportunity to hire five WSPN graduates into her department, and they all came in with an eagerness and excitement.

“Anything that there is new to learn, they are always right on, asking appropriate questions and trying to learn more about it,” she said.

Jamie Brez, MSN, RNC-MNN, a graduate from the WSPN Class of 2003 who is now working as women’s services educator at SSM Health DePaul Hospital in Bridgeton and is currently enrolled in the doctorate program at St. Louis University, describes her experience in the Washington program as “nothing short of life-changing.”

After initially enrolling in the nursing program at East Central and transferring to a “desirable” four-year program once she had enough credits, Brez wasn’t feeling inspired.

She returned to Washington and soon enrolled in the LPN program at Washington. That made all the difference for her.

“The WSPN gave me a solid foundation that helped accelerate my nursing career,” said Brez. “This program not only shaped me as a learner, it helped me recognize that I was capable of doing more in my profession.

“The educators at WSPN demonstrate a passion for nursing and set the pace for lifelong learning. The first step in my career as a nurse was to pick a program that invested in me, and the WSPN did just that.”

Choate said the Washington program is so rigorous that she believes it provides a better start for nurses than a four-year program.

“I’m a big fan of being an LPN first,” she said. “I feel like it sets such a foundation . . . there is nothing I found that compares to the knowledge base you get from that high-intense, vigorous course that they do as an LPN. It is intense, but it really sets you up to be ready.

“It’s a lot of information crammed in. You are there four days for eight hours a day. It’s a lot of hands-on work in the lab, in the clinicals. There’s also a lot of high expectations from the staff at the school. They don’t let you slide or cut corners. You are expected to be prepared when you come in for your assignment that day. ”

In her own career, Choate went to work in a long-term care facility in Sullivan after graduating from WSPN. She worked for a couple of years before enrolling in the RN program at ECC, which offers a “bridge” program with WSPN, meaning that classes she had taken at Washington would transfer for credit to the RN program.

In her role at St. Clair Nursing Center, Choate said she always recommends WSPN to staff who are interested in becoming a nurse.

“We have had five employees go to the WSPN — one was a housekeeper who is now a graduate and working on the floor here. We had four others in the past two years, and a couple who are getting ready to graduate now.”

In addition to serving as administrator at WSPN, Redd also is the health services coordinator for the School District of Washington, meaning she hires nurses, some RNs and some LPNs, to work in the schools.

Four of those who currently work for Washington schools are graduates of the WSPN program. Being a school nurse today can be a demanding job, said Redd, noting there are students who require tube feeding, who have seizure disorders and who are diabetic and need their insulin monitored.

Dina Grus was one of those students juggling a family and school when she was an LPN student in the Washington program 10 years ago.

Today she works in the ICU at Missouri Baptist Hospital in Sullivan, having continued her education to become an RN, and her daughter, Savannah Gregory, is a student in the LPN program.

Grus was 36 and had four children ages 7 to 19 when she enrolled at Washington School of Practical Nursing. Gregory, who was 15 at the time, said her mom inspired her to become a nurse.

Gregory had been working as an EMT before she decided follow in her mom’s footsteps and enroll at the Washington School of Practical Nursing.

She left the EMS field behind for nursing because she wants to work in pediatrics.

Redd said it’s fairly common for WSPN students to be children or grandchildren of past graduates.

“One year we had five students who had parents or grandparents or siblings or someone who had gone through the program that was graduating at the same time,” said Redd. “It was like a family reunion. ”

The WSPN is accepting applications through April for students who want to be part of the 2020-’21 class.

Along with Redd, instructors are Kari Huff, RN, BSN, and Dina Vitale, RN, MSN. Lisa Kreamalmeyer is the secretary.

The program is licensed to accept up to 35 students each year. Usually 27 to 29 of them graduate, said Redd.

Most of the students who enroll at WSPN are not right out of high school. They are adults who are juggling full-time jobs and, many times, a family, in addition to their school schedule.

There are no prerequisites for enrolling in the WSPN program. Students can come in with a high school diploma or GED, and after one year of intense learning, they can begin working in jobs with salaries that typically range from $17 to $25 an hour — and some of which may include a signing bonus.

Some graduates may use their LPN as a stepping stone to start working and then go back to school to earn a higher degree.

“And many of the larger facilities, like Mercy, will help pay for you go back to school,” Redd noted. “Part of the reason for that is the demand for nurses. It’s huge. It has never dropped.

“Employers are constantly looking for nurses of all levels,” said Redd. “I’ve seen sign-on bonuses for CNAs, which is an entry level type job that only requires a six-week training course.”